Tropical Storm Dorian set to hit Puerto Rico, may be off Florida as Category 2 hurricane 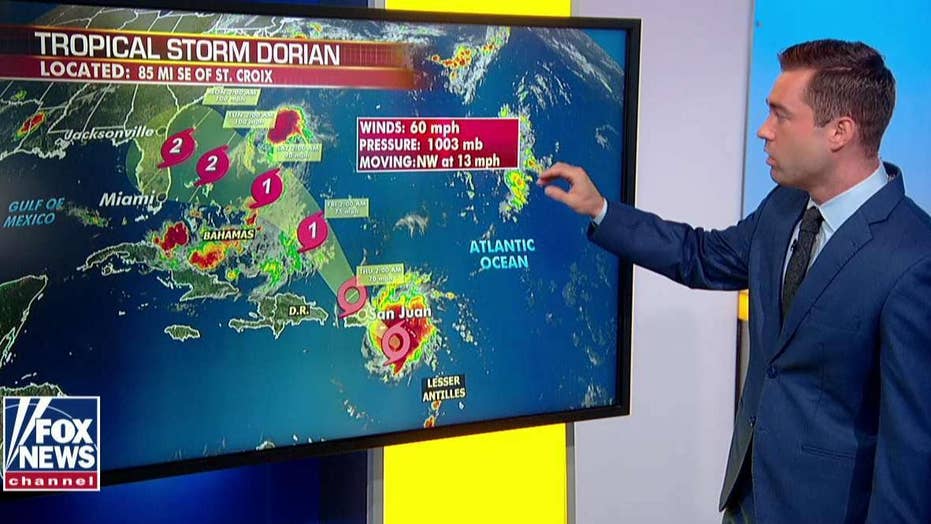 Adam Klotz has your storm forecast.

The fourth named storm of the hurricane season, Tropical Storm Dorian, strengthened overnight Wednesday as it continues to spin toward the Virgin Islands, Puerto Rico and the Bahamas — and by the weekend it may lurk off Florida's coast as a Category 2 hurricane.

The National Hurricane Center said Wednesday in its 5 a.m. EST update that Dorian was located about 85 miles southeast of St. Croix with maximum winds of 60 mph – a 10 mph increase from Tuesday – as it moved northwest at 13 mph.

Hurricane watches have been posted for the U.S. Virgin Islands, Puerto Rico, Vieques and Culebra. Tropical storm warnings are in effect for the British Virgin Islands, and in the Dominican Republic from Isla Saona to Samana.

TROPICAL STORM DORIAN'S PATH: WHAT YOU NEED TO KNOW

The center of Dorian is forecast to track over or near the U.S. and the British Virgin Islands and Puerto Rico later Wednesday before the storm then moves east of Turks and Caicos and the southeastern Bahamas on Thursday, and near or to the east of the central and northwestern Bahamas on Friday and Saturday. 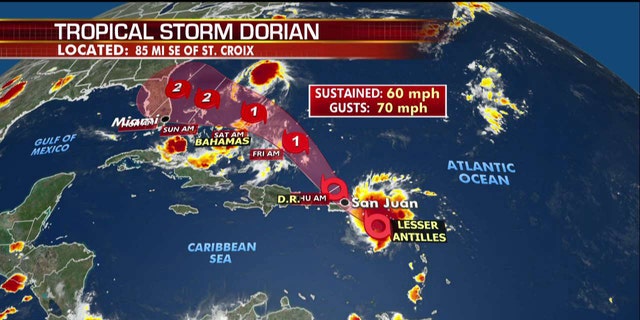 "This is trending in the wrong direction," Fox News Meteorologist Adam Klotz said Wednesday on "Fox & Friends." "It's strengthening, maybe spending more time over warm water, which will allow it to continue to pick up those wind speeds, pick up all that extra moisture. It's looking like a tough system."

After Saturday, the NHC said that all the intensity models show Tropical Storm Dorian becoming a hurricane after hitting Puerto Rico and then getting stronger while threatening the Bahamas and the southeastern United States.

Dorian's exact path remains very difficult to predict, but forecasters say nearly all their models suggest residents of Florida should keep a close watch as the storm approaches the U.S. coast this weekend.

"This could go anywhere from Miami as far north as Savannah," Klotz said Wednesday.

In Puerto Rico, the storm is expected to bring the threat of landslides, widespread flooding and power outages. President Trump declared an emergency Tuesday night and ordered federal assistance for local authorities. 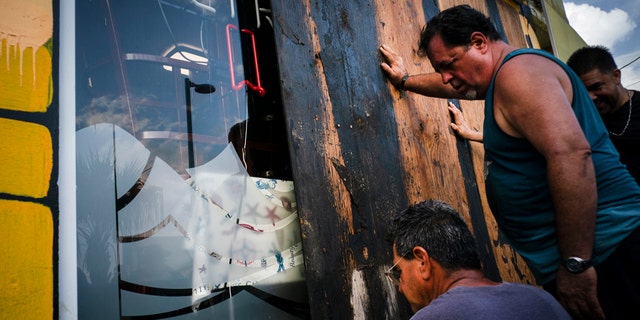 Men board up a shop’s windows ahead of the arrival of Tropical Storm Dorian in Boqueron, Puerto Rico, Tuesday, Aug. 27, 2019.
(AP Photo/Ramon Espinosa)

The change in the storm's course concerned many across the U.S. territory, where some 30,000 homes still have blue tarps as roofs nearly two years after Hurricane Maria. The island's 3.2 million inhabitants still depend on a shaky power grid that has remained prone to outages since it was destroyed by the Category 4 storm.

Puerto Rico Gov. Wanda Vázquez urged those living in flood-prone areas or under a blue tarp to move into one of the island's 360 shelters on Tuesday night. Housing Secretary Fernando Gil has said some 9,000 to 13,000 homes with blue tarp roofs are located in the region that Dorian is expected to affect the most.

"We learned our lesson quite well after Maria," Vázquez said. "We are going to be much better prepared." 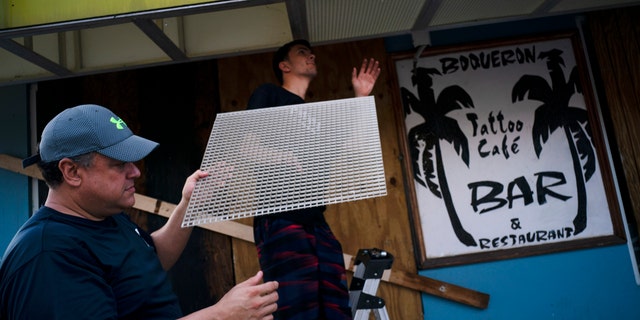 But Jorge Ortiz, a 50-year-old construction worker, was taking no chances. He spent Tuesday tying down pieces of zinc that now serve as his roof because Maria ripped the second floor off his house when it hit on Sept. 20, 2017.

He was forced to rebuild everything himself and finished just three months ago with no assistance from the local or federal government.

"They told me I didn't qualify because it was a total loss," he told the Associated Press. "I'm worried that despite all this sacrifice, I'll lose it again."

Although top government officials in Puerto Rico said they were prepared for the storm and had sufficient equipment, a couple of mayors said Tuesday they did not have enough generators or shelters that were properly set up.

Kurt Knutsson breaks down which apps are best for tracking severe weather and handling basic emergencies.

José Ortiz, executive director of Puerto Rico's Electric Power Authority, acknowledged that the distribution system still has weak areas and could "suffer" under winds of 50 to 60 mph. However, he stressed the agency has the needed inventory, including more than 120,000 lights, 23,000 poles and 7,400 transformers.

But Freddyson Martínez, vice president of a power workers' union, told the AP that while the electric grid has improved in some areas, he worries about a lack of power line workers and post-Maria patches which feature lines affixed to palm trees.

"Those are problems that are still being corrected to this day," he said. "These are the realities we have to face with this storm."