The National Hurricane Service on Sunday revealed that Tropical Storm Beta will likely make landfall Monday in the  storm-battered states of Louisiana and Texas.

‘There is the danger of life-threatening storm surge near times of high tide through Tuesday along portions of the Texas and Louisiana coasts within the storm surge warning areas,’ NHC wrote on Sunday.

According to NHC, Beta will make landfall on the southeastern coast of Texas, including the beachside city of Galveston, after 1pm on Monday. 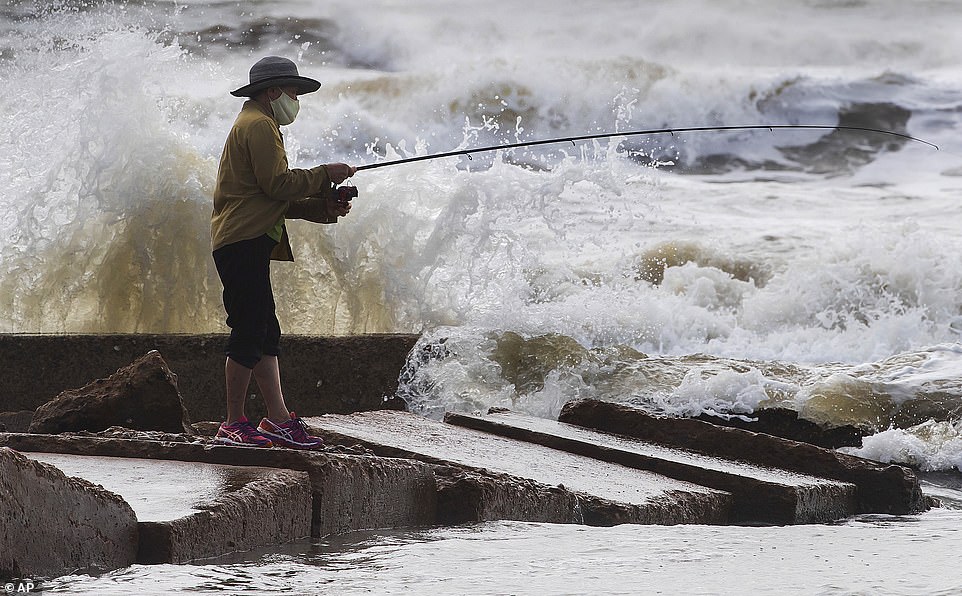 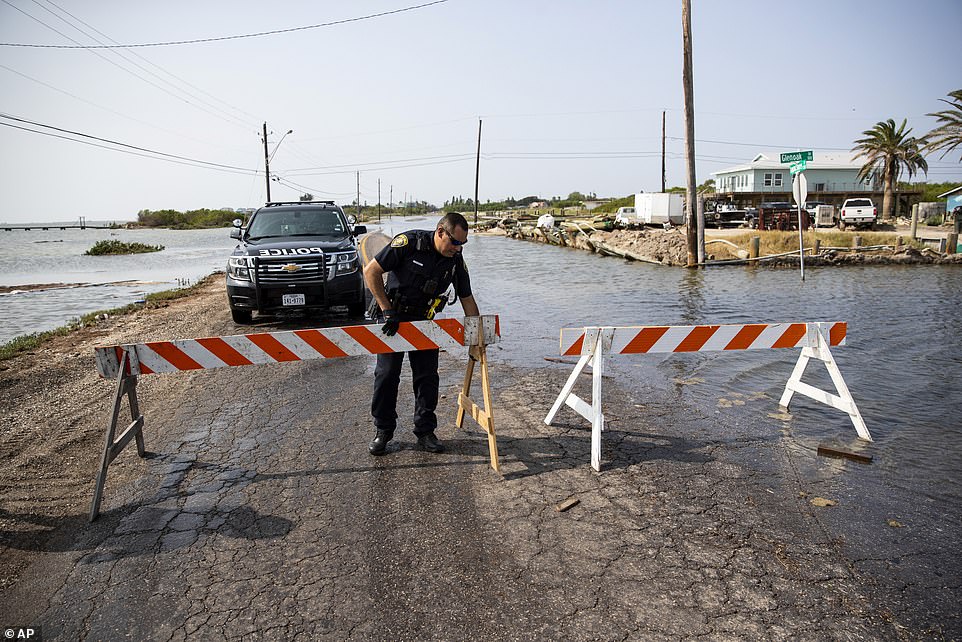 A Corpus Christi police officer in Texas places an emergency barricade down to close Laguna Shores Boulevard due to flooding related to Tropical Storm Beta, which is expected to affect parts of the state 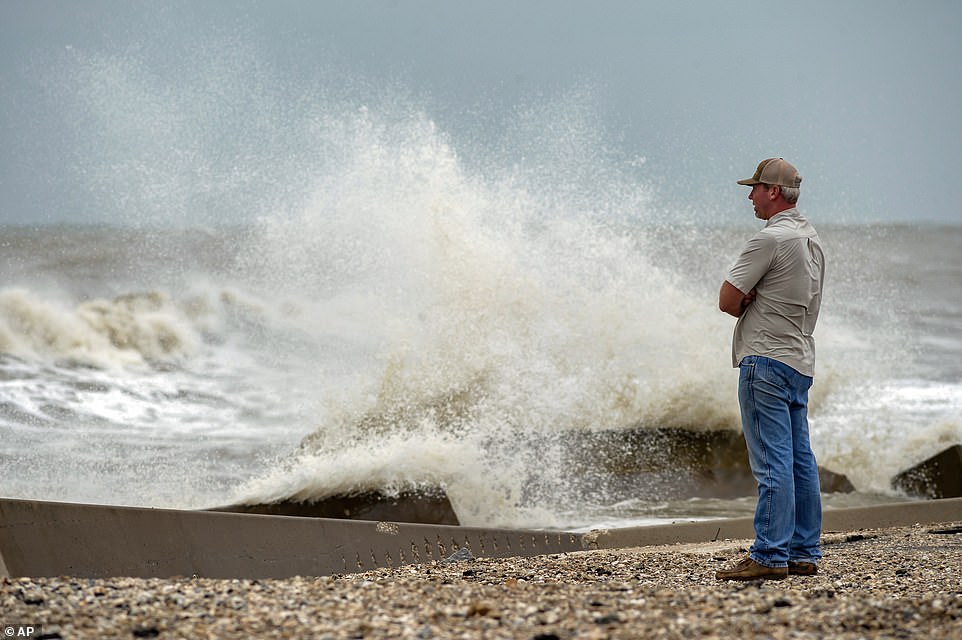 Pictured: Cole Broom (right) stands on the beach near the intersection of Highway 124 and Highway 87 on the Bolivar Peninsula, Texas, watching the rough surf 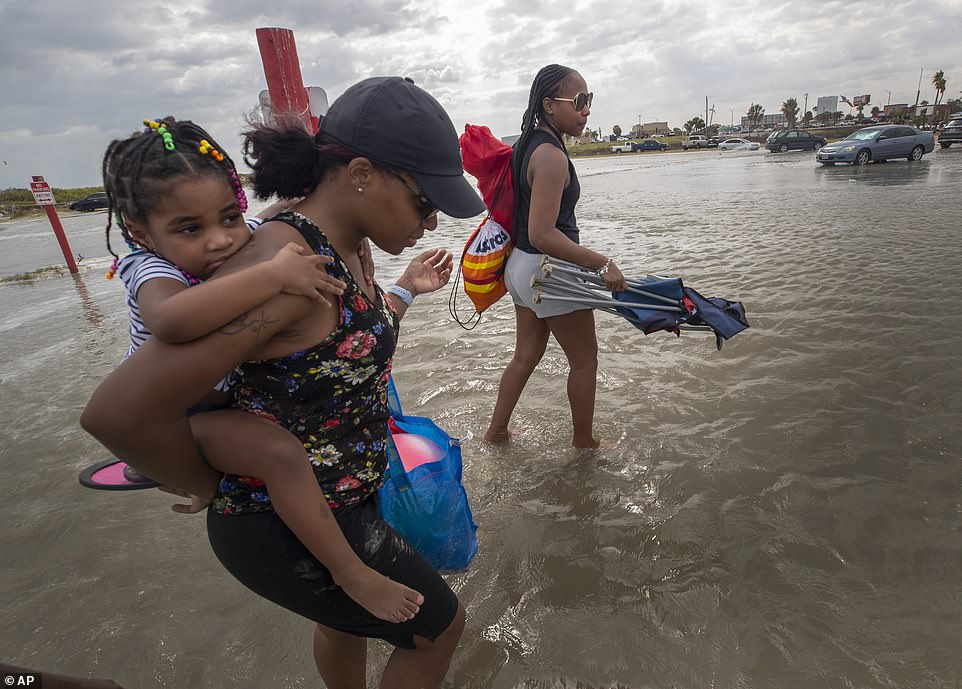 Beta will remain a tropical storm as it spins across Texas’ coast to southwest Louisiana. Around 1pm on Wednesday, Beta will upgrade into a tropical depression before entering the Pelican State.

Once in Louisiana, Beta’s powerful winds and rainfall will overtake the state before extending into Arkansas, Mississippi, Tennessee and Alabama.

Beta is forecast to reach those additional four states between Thursday afternoon and Friday afternoon.

Wind speeds as of 4pm CST on Sunday tracked at 60mph, but will drop to 25mph by Friday as it hovers over Arkansas, Alabama, Louisiana and Tennessee.

Parts of Louisiana, specifically Lake Charles and the surrounding areas, are still reeling from the devastating affects of Hurricane Laura last month.

The 150mph monster of a storm left nearly a million residents without power, killed at least 10 people and drowned out several homes with rain water.

Damage sustained by Hurricane Laura will cost anywhere between $4million and $12million.

Places like Port Arthur, Texas, were also hit by the devastating hurricane but sustained less damage 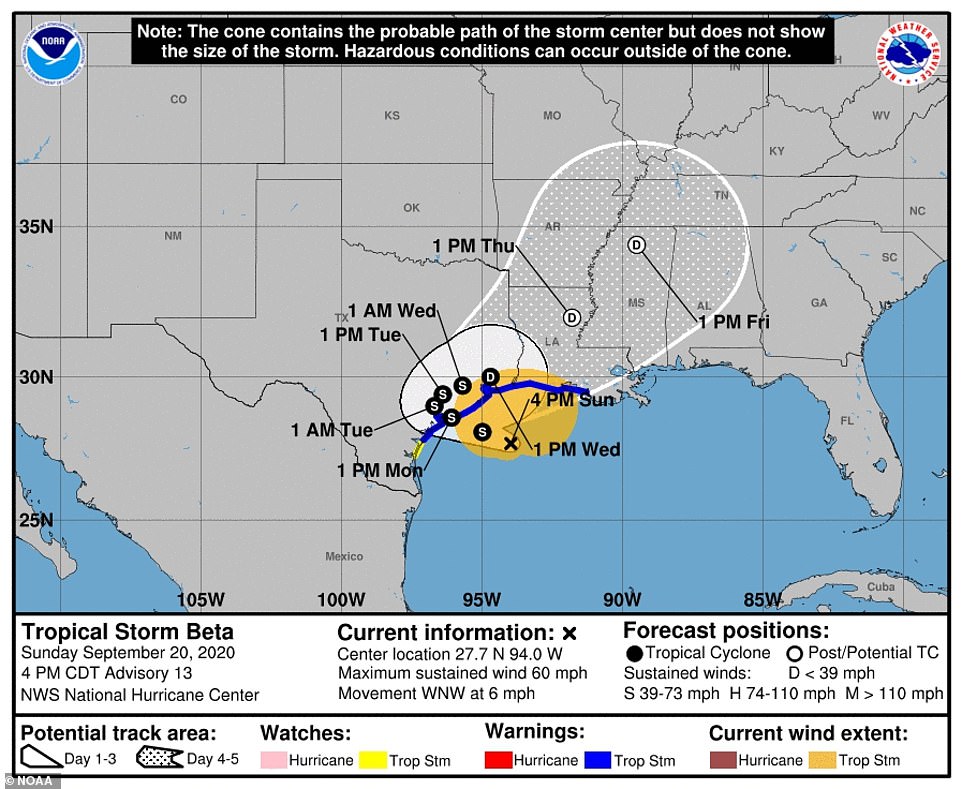 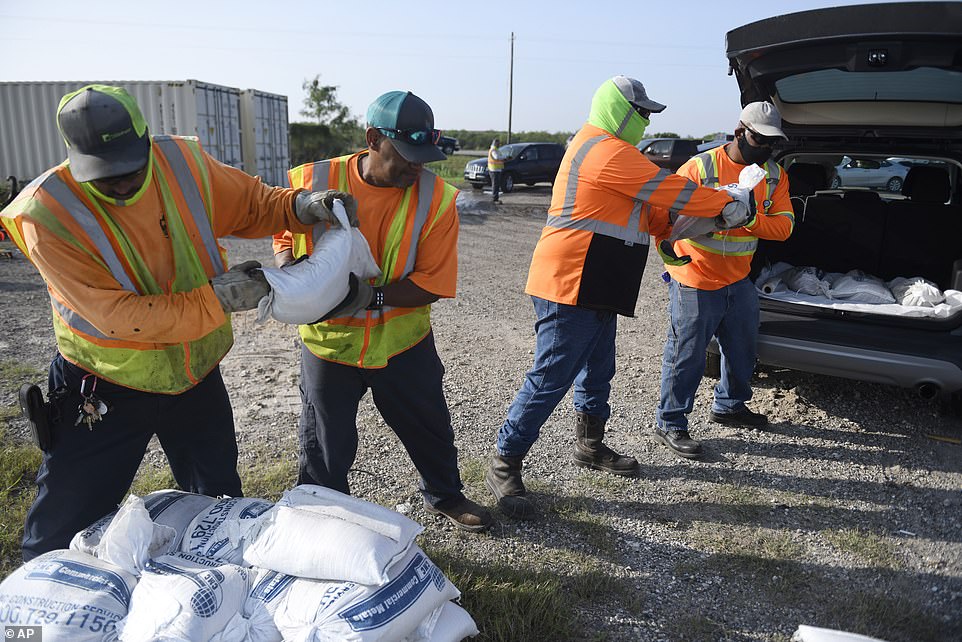 But already, Beta has prompted flooding along parts of Texas and a number of storm warnings have left millions of Southerners on standby.

Families who visited the beach for weekend fund were forced to drag their belongings through elevated waters, while small children were carried on their parent’s backs.

As large waves raged towards the shore, Corpus Christi authorities placed barricades along roadways to block traffic amid flooding and  city workers loaded free sandbags into resident’s cars in preparation.

Some residential streets and parking lots were quickly submerged as Beta continued on its path. 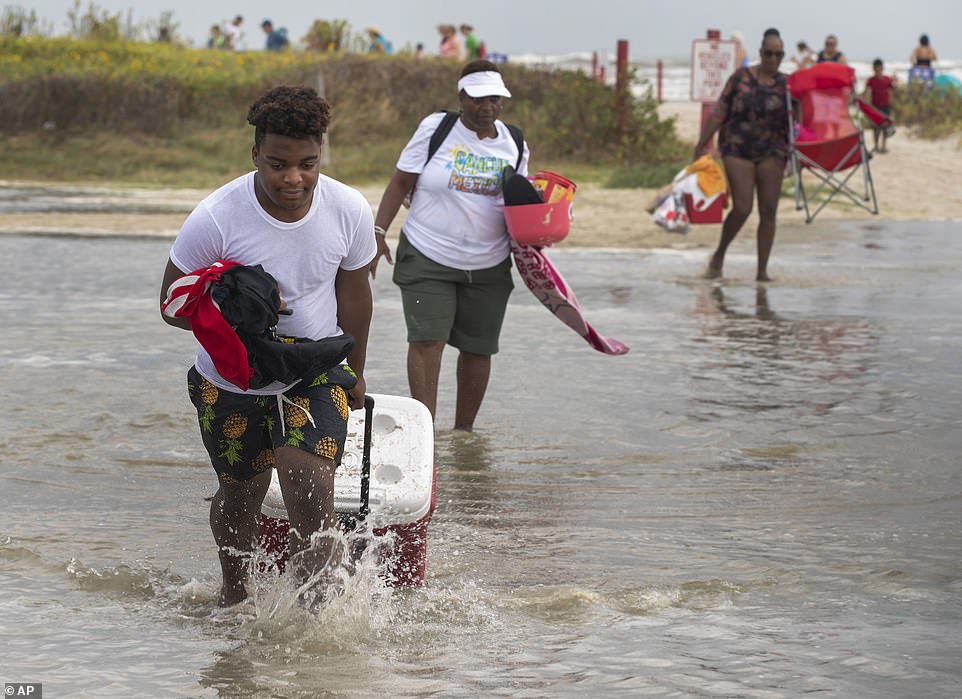 Tyler Heads (left) toted his belongings through tidewaters as he and other beachgoers crossed the flooding Stewart Beach parking lot in Galveston, Texas, on Sunday ahead of Tropical Storm Beta 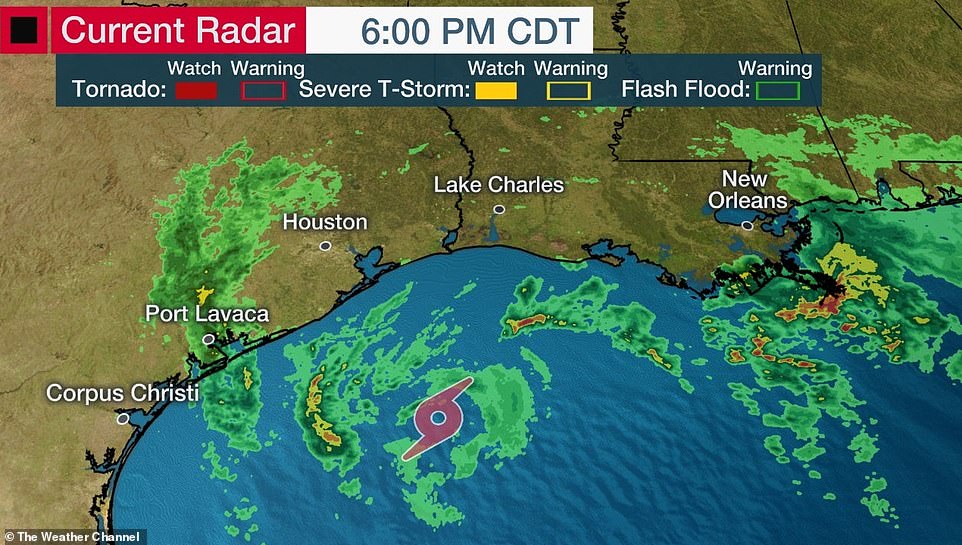 Pictured: a graphic provided by the Weather Channel shows cities in Texas and Louisiana that are expected to feel tropical storm conditions starting Monday 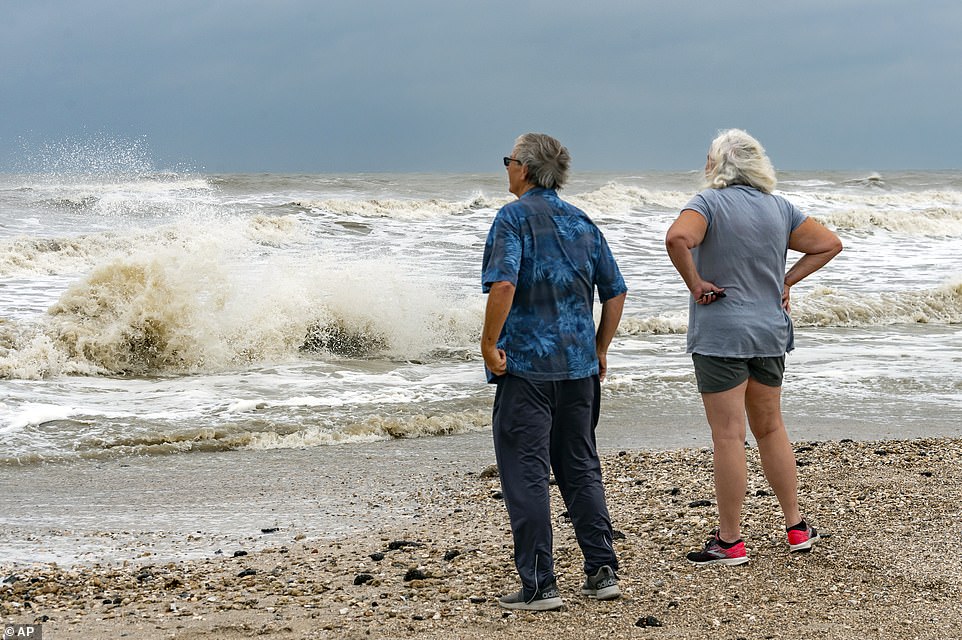 Weather officials forecast that Tropical Storm Beta will make landfall on Monday afternoon or evening, before continuing further inland throughout the week. Pictured: Steve and Linda Buser of Beaumont check out the rough surf on the beach near the intersection of Highway 124 and Highway 87 on the Bolivar Peninsula, Texas 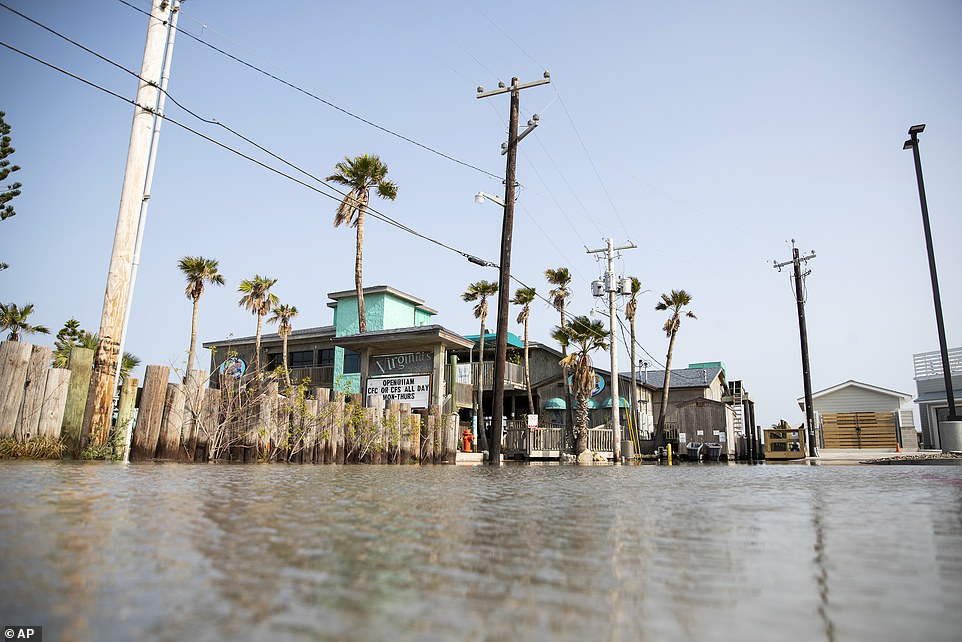 Flood waters fill the parking lot near Virginia’s On the Bay in Port Aransas, Texas, where Gov. Abbot told residents to adhere to local officials advice on staying safe during the storm

Weather officials have sounded tropical storm warnings amid the worsening conditions from Port Aransas, Texas, to Morgan City, Louisiana, according to The Weather Channel. This includes the cities of Houston and Victoria, Texas, and Cameron, Louisiana.

Storm surge warnings were in effect from Port Aransas, Texas, to the Rockerfeller Wildlife Refuge, Louisiana.

Beta’s force winds extended as much as 195 miles from the storm’s center, affecting cities like Galveston, Houston and Lake Charles. 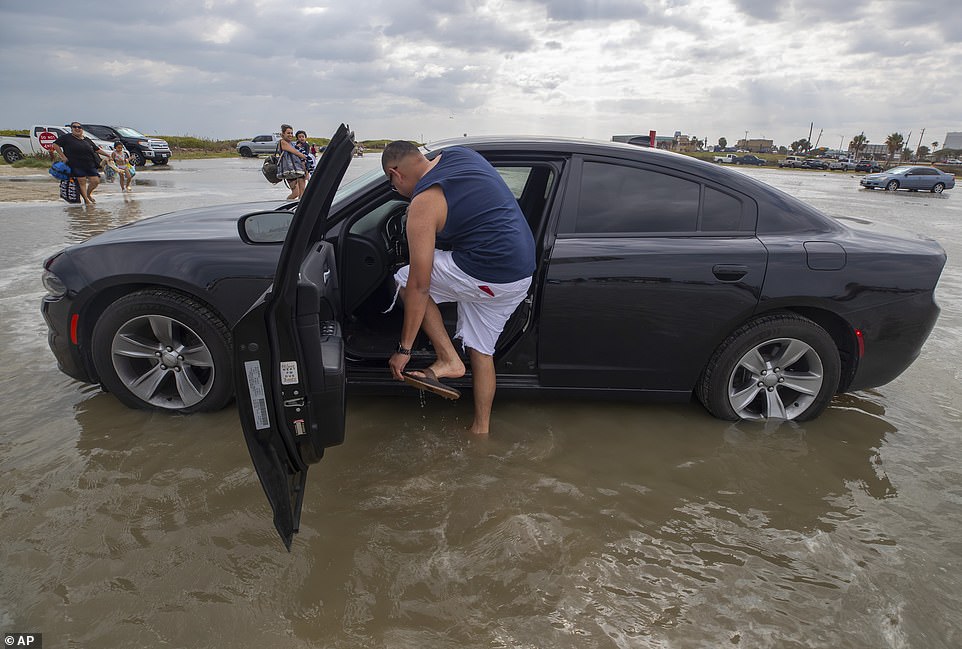 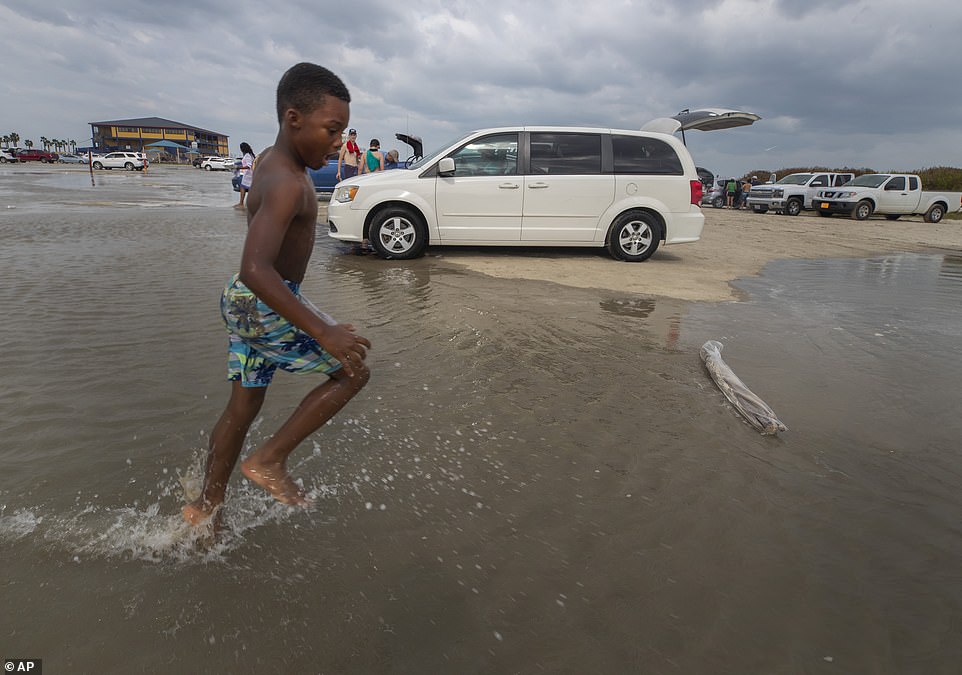 Storm surge warnings were in effect from Port Aransas, Texas, to the Rockerfeller Wildlife Refuge, Louisiana, and include Galveston Bay in Texas. Pictured: Lyrick Gipson, 9, (pictured) races through the flooding Stewart Beach parking lot in Galveston 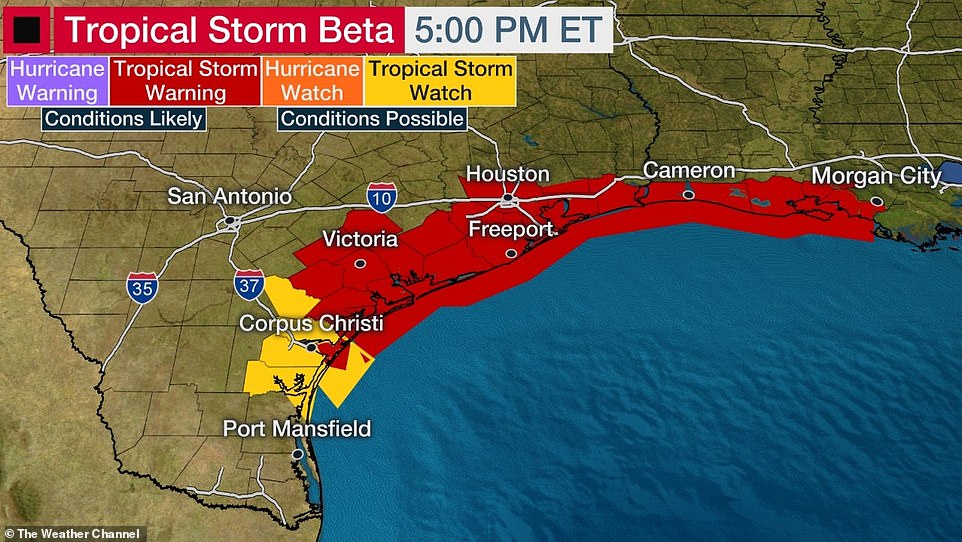 Weather officials announced that Tropical Storm Beta not longer has the potential to upgrade into a hurricane, leaving much of the Gulf Coast under tropical storm warnings 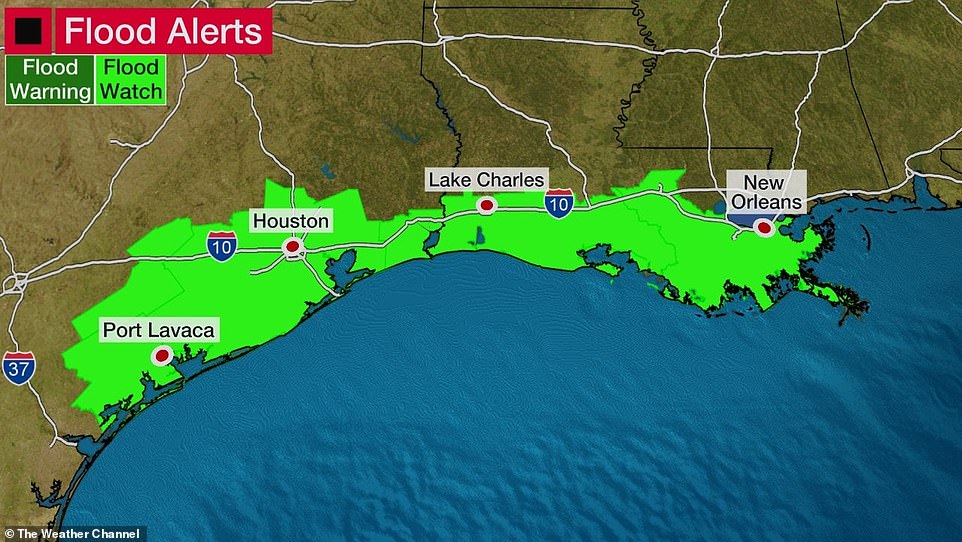 Pictured: a graphic provided by The Weather Channel outlined areas in Texas and Louisiana where flood alerts have been issued

The Weather Channel reports that Beta will likely come against dry air and wind shear that will stop any significant escalation before landfall. It is no longer expected to transform into a hurricane.

Both Texas and Louisiana’s governors issued warnings to their residents this weekend.

‘Prepare for heavy rainfall and the threat of storm surge and flooding in certain regions of the state due to Tropical Storm Beta,’ said Louisiana Gov. John Bel Edwards in a statement.

‘Many homeowners and business owners in the potential impact areas are already dealing with recovery from Hurricane Laura,’ the statement added.

Gov. Greg Abbott of Texas encouraged residents to adhere to local officials advice as they prepare for rain, flash floods and the possibility of isolated tornadoes. 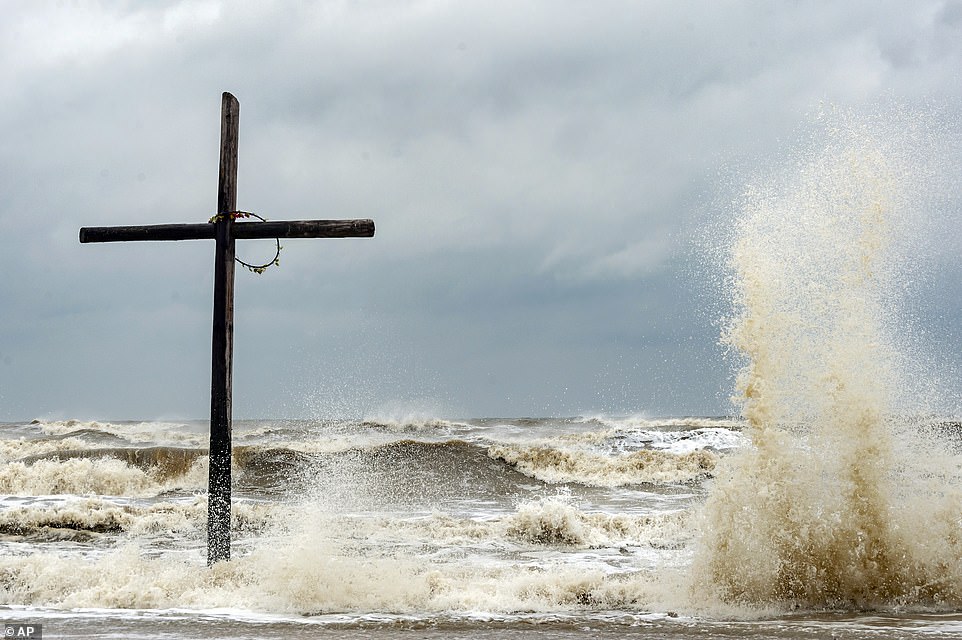 The cross that stands on the beach near the intersection of Highway 124 and Highway 87 gets buffeted by the high seas on Bolivar Peninsula, Texas 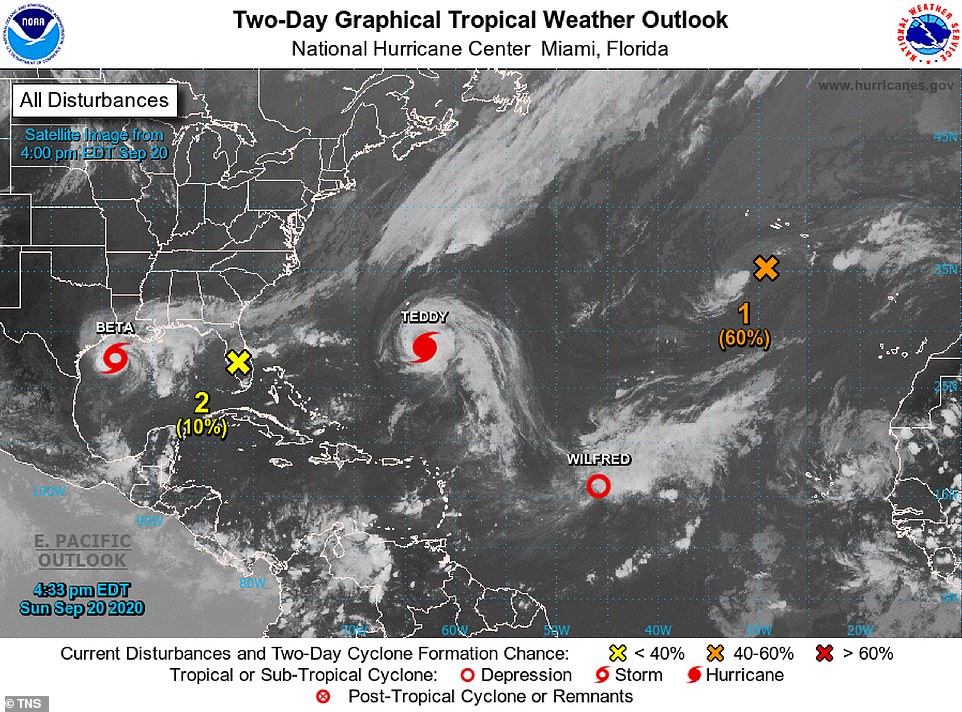 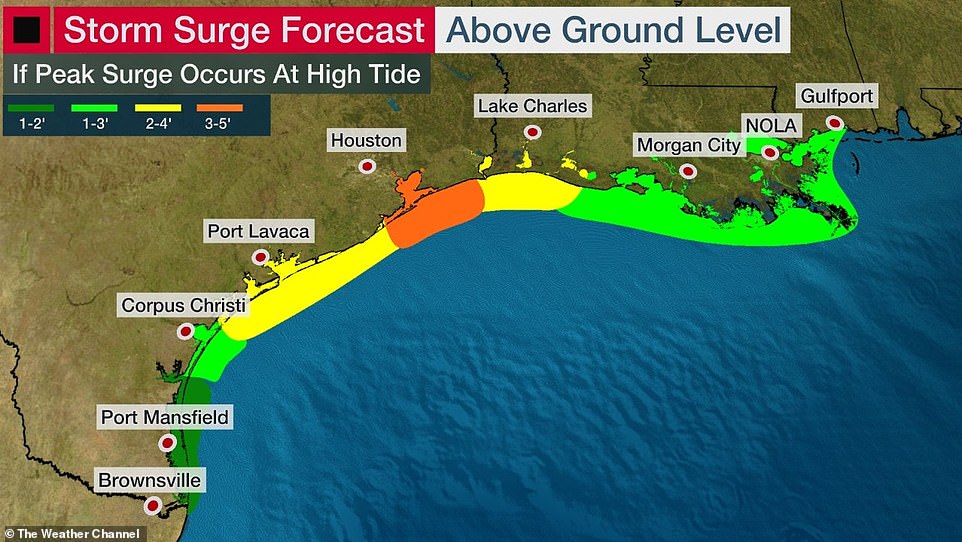 Pictured: Storm surges, categorized by place and expected rainfall, are shown in this graphic

‘The State of Texas is prepared to support communities in the path of the storm, where substantial amounts of rainfall and flash flooding are a significant threat. We will continue to closely monitor the storm and work collaboratively with officials to ensure our fellow Texans are safe,’ the statement read.

NHC reported that parts of Louisiana and Texas could see six to 12 inches of rainfall, with 15 inches possible in some areas.

Further away from the coast, people may experience between three and five inches of rainfall from the ArkLaTex area to the lower Mississippi Valley through Wednesday.

Flood alerts have been issued along the northeast Gulf Coast, including Houston, Lake Charles and New Orleans.

The NHC revealed it ran out of names for the 2020 Atlantic Hurricane season and began using the Greek alphabet for the second time in history.