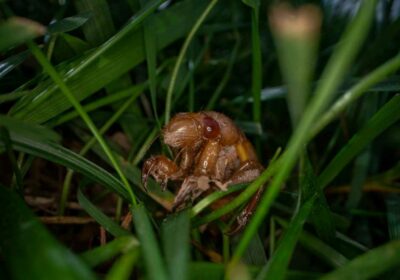 This could sting: Thousands of genetically modified mosquitoes being released in Florida

Trillions of cicadas as loud as lawnmowers will pop out of the ground for the first time in nearly two decades in New York and 14 other states this weekend, according to experts.

The Brood X cicadas — winged black insects that hibernate underground for 17 years —  will awake from their subterranean snooze and emerge to mate from New Jersey to Georgia.

Scores of the half-inch bugs will blanket trees and generate a non-stop humming at 105 decibels, roughly the equivalent of a lawnmower, in an attempt to find a partner.

The winged horndogs are expected to act like sex-starved teenagers emerging from a decades-long dirt nap, said University of Maryland entomologist Michael Raupp.

“You’ve got a creature that spends 17 years in a Covid-like existence, isolated underground sucking on plant sap,” Raupp told The Guardian.

“Once in the treetops, hey, it’s all going to be about romance. It’s only the males that sing. It’s going to be a big boy band up there as the males try to woo those females, try to convince that special someone that she should be the mother of his nymphs,” he said.

“He’s going to perform, sing songs. If she likes it, she’s going to click her wings. They’re going to have some wild sex in the treetop.”

And they’re unlikely to buzz off for weeks.

After mating, the  female moves to small branches of the tree to lay her eggs. After “a matter of weeks” they will then burrow back down under the soil, he said.

The insects don’t emerge until the temperature reaches at least 64 degrees, which forecasters expect to see in northern areas as soon as  Sunday.

“This is one of the craziest life cycles of any creature on the planet,” Raupp said.