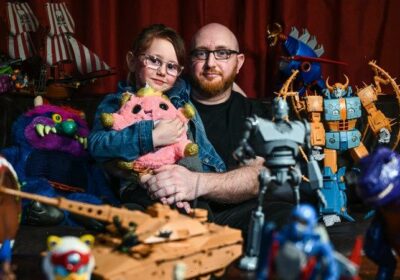 When Beven Davey was 5 years old, his great-grandmother Myra gave him two toy action figures — the characters Mantenna and Leech from the Masters of the Universe TV series.

“I remember thinking, ‘these are incredible’,” he says. “And saying, ‘I want to collect the whole set, Gran’. And she said, ‘yes that will keep you out of trouble’.” 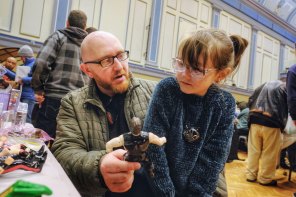 To buy, or not to buy: toy collector Beven Davey and his daughter Izzy.Credit:Luis Enrique Ascui

Collecting turned out to be not just a phase but a lifelong passion for Davey, 41, who now owns “thousands” of action figures – “I haven’t counted them” – and shares them with his seven-year-old daughter, Izzy.

On Sunday, the pair happily hunted for new pieces at the Vintage and Modern Toy Fair at Malvern Town Hall.

Having driven 85 kilometres from their Geelong home, the Daveys were among the first in line at 9am to view more than 100 stalls. They had paid $20 to join a half-hour early-bird session.

Davey’s purchases included a 2016 Judge Dredd figure and motorcycle in its original box for $250; a 1980s GI Joe comic for $15; and a bag of Crash Test Dummies action figure parts and accessories for $15. 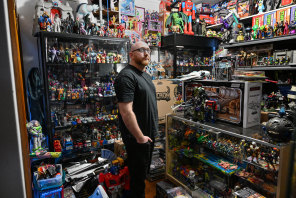 Beven Davey at home in Geelong with some of his huge toy collection.Credit:Joe Armao

Davey, who has a high-stress job as a nurse, caring for palliative and disabled patients at Barwon Health during the COVID-19 pandemic, said collecting toys was a great de-stresser.

When he gets home from work, “I’ve often got a parcel of toys waiting at the door,” he said. “Izzy and I sit there, open it together, go through it and have a chat about it.” 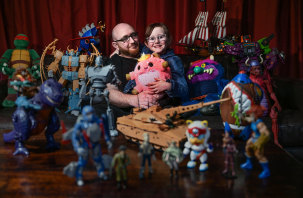 Father and daughter Beven and Izzy Davey have bonded over their toy collecting hobby.Credit:Joe Armao

Why does he collect? “I just love it,” he said. “Life is short. Do what makes you happy. Possibly for nostalgia. The world’s a pretty rough place at the moment.

“Do I watch the news and hear about people having car accidents or kids dying, or wars, or do I go read a comic book and talk to friends about toys? It gives me a good frame of mind, I guess.”

Vintage and Modern Toy Fair co-founder Will McGowan said the internet nearly killed off toy fairs in the early 2000s, but many buyers now preferred to ensure in person that toys were not fake or damaged. 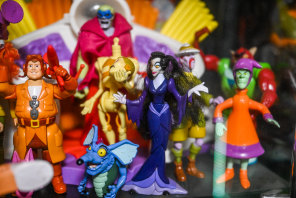 And at a fair, traders could avoid online selling and posting fees. He said children of the ’90s who previously only traded online were now among the backbone of the fair’s success.

McGowan said the fair was a community, offering the chance for online friends to meet in real life.

He said hot items this year include Funko Pop vinyl figures based on series such as Stranger Things; art toys — limited edition resin figures from artists such as Cipta Croft-Cusworth; and staples such as Lego, Barbie and Hot Wheels cars.