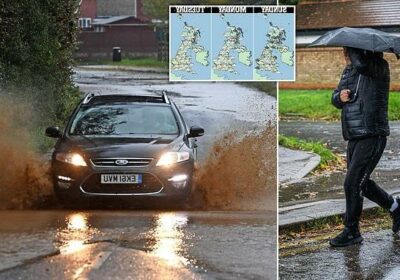 Torrential rain and 70mph gale-force winds are set to batter Britain as forecasters have issued yellow weather warnings for flooding across several areas of the country.

Strong gusts coming from the west will bring a ‘wild start’, with potential for further disruption and wet weather going into the first week of November, according to the Met Office.

The yellow weather warning is also in place for Glasgow, where the global Cop26 climate conference is due to begin on Sunday.

The Met Office has said ‘damaging winds’ of up to 60mph to 70mph are possible on Sunday, particularly along the south coast, due to a ‘deep Atlantic low pressure system’ arriving from the west. 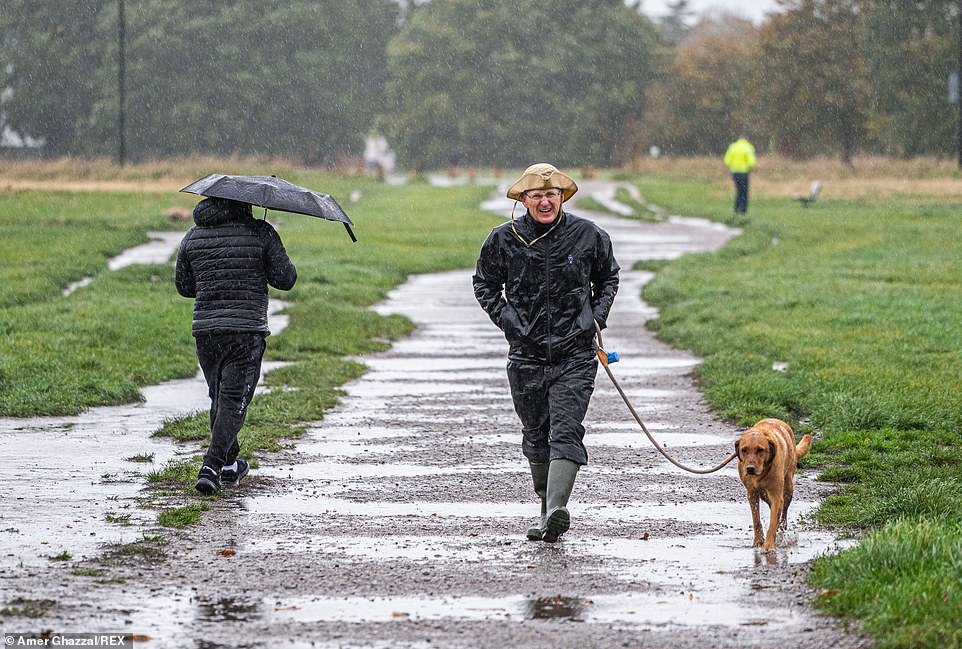 A dog walker struggles through strong winds and heavy rain in Wimbledon Common on Sunday. The Met Office has warned winds could reach 70mph 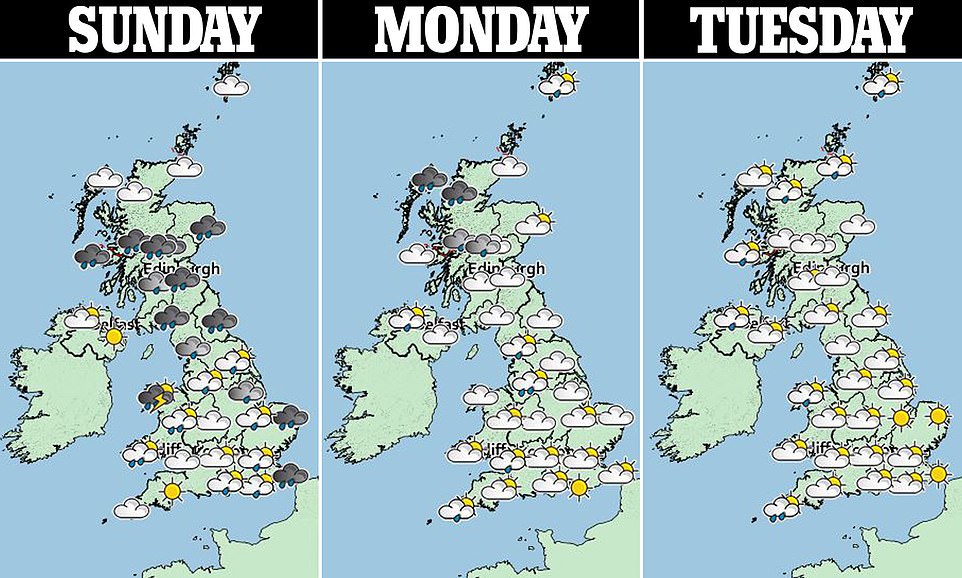 The three-day outlook for the UK with a yellow weather warning in place for several areas, including Cop26 climate summit host Glasgow, on Sunday

He added: ‘Further West heavy rain will be picking up and there’ll be some heavy rain coming in from the Atlantic.

‘That will dominate the weather into tomorrow.

‘Heavy rain will push across into…western parts of England and Wales and be accompanied by some pretty strong and gusty winds.’

He continued: ‘Given the fact that trees are in full leaf and the ground is pretty saturated in many areas, you could get one or trees coming down.

‘It’s going to be very unsettled.’

One resident in Amesbury, Wiltshire, thought they had witnessed a ‘hurricane’ hit the area after spotting bins flying and trees breaking due to the powerful winds. 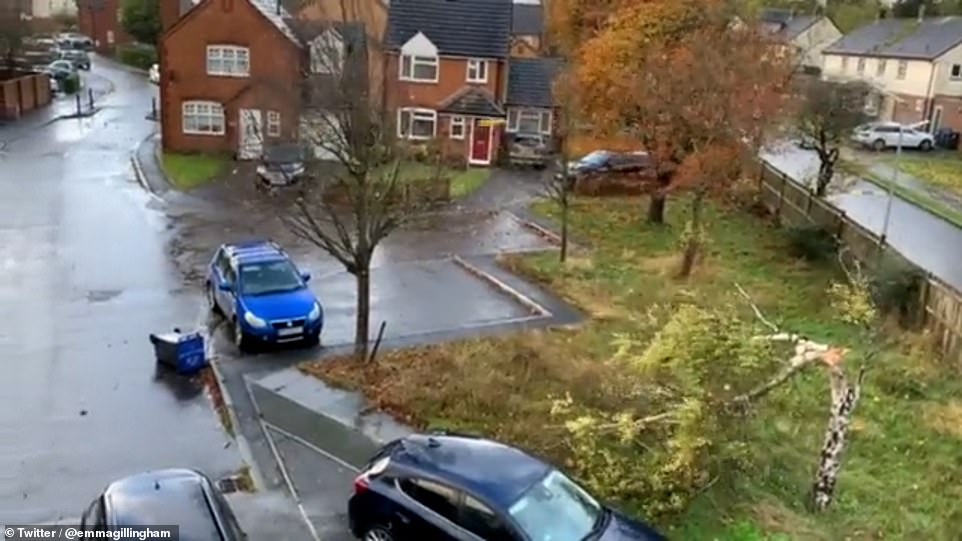 Broken trees and a dustbin blown across a residential street in Amesbury, Wiltshire, as strong winds and heavy rain batter the UK 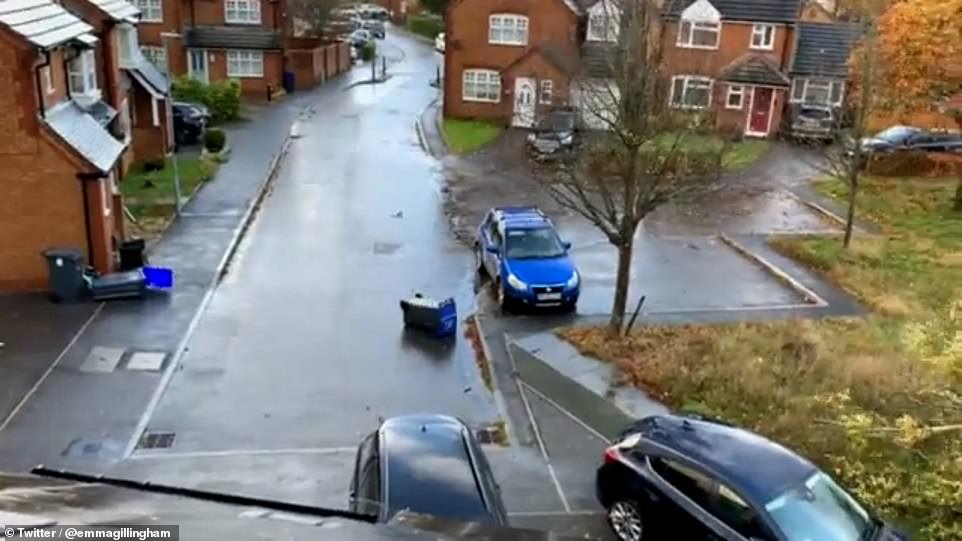 The infectious disease ecologist thought she had witnessed a hurricane, such was the strength of the wind and rain

However, the Met Office said it believed the ‘hurricane’ was in fact a ‘squall’, the name for a ‘sudden, sharp increase in wind speed lasting minutes’.

It comes as three people are feared to have drowned and another is fighting for their life after they were swept off their paddleboards when a sudden storm turned a flooded river into a torrent on Saturday night.

The three, part of an organised outing, had been in the water only minutes when they were hit by a deluge of rushing water as they paddled near a weir on the swollen river in Pembrokeshire.

They were swept from their boards and seen ‘in distress’ in the River Cleddau, near the town centre of Haverfordwest. A yellow weather warning is in place across several areas of the UK, including most of the south, where a man at Wimbledon Common is pictured struggling with an umbrella amid heavy rain

Emergency services at the River Cleddau in Haverfordwest, Wales, on Saturday, where at least three people were on their boards on a usually calm stretch of the river when they were hit by a huge deluge of flood water 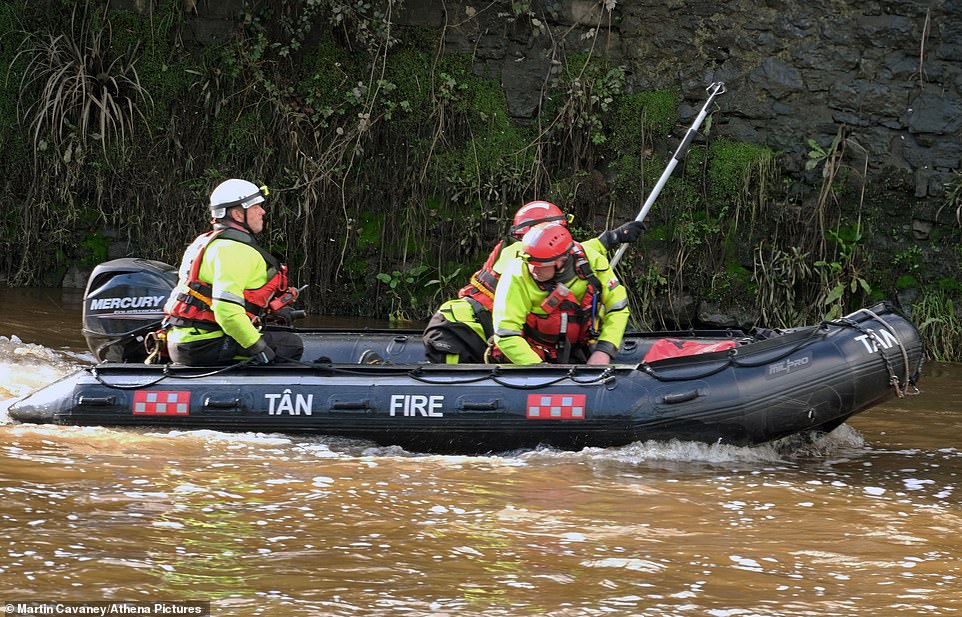 Rescue teams searching for paddle boarders at the River Cleddau on Saturday. It comes amid warnings to be careful of dangerous ‘fast flowing and deep floodwaters’

Air support was provided by both the National Police Air Service (NPAS) and Wales Air Ambulance.

Mr Keats said declining temperatures throughout next week would bring a ‘seasonal’ feel and that weather would remain ‘unsettled’, though risks of ‘hefty downpours’ remained.

‘The most disruptive potential from the weather will be in the next 24 to 36 hours’,  he said.