Paris: France will introduce new offence of endangering people by publishing their personal details on social media, following the beheading of a teacher.

The announcement comes as President Emmanuel Macron named a domestic militant Islamist group as “directly implicated” in last week’s gruesome street beheading of Samuel Paty, the high school history teacher who had discussed caricatures of the prophet Muhammad with his class.

The authorities have ordered the closure of a Paris mosque that posted a video criticising the teacher for discussing cartoons of the prophet Muhammad in a class on free speech.

Social media played a pivotal role in inciting the murder of Paty, according to sources close to the investigation. 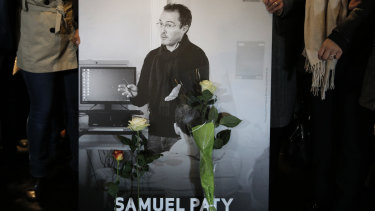 People hold a photo of the history teacher Samuel Paty, who was beheaded last week, during a memorial march in homage to him, in Conflans-Sainte-Honorine, northwest of Paris. Credit:AP

It emerged yesterday that the killer, an 18-year-old Chechen refugee, exchanged WhatsApp messages with a parent leading an online campaign to get Mr Paty fired.

Brahim Chnina, whose daughter attends Mr Paty's school, had posted videos identifying the teacher and is one of 16 people under arrest over the killing.

Jean Castex, the prime minister, said in parliament: "We cannot reconcile ourselves to impassively witnessing outpourings of hate on social media."

He said the government would put forward a bill to outlaw endangerment on social media and make platforms more accountable for content. It will be an amended version of an earlier bill banning hate posts passed by parliament but overturned by France's Constitutional Council in June.

Four schoolchildren who are among those being held over the killing have reportedly admitted being paid more than €300 ($500) by the killer, Abdoullakh Anzorov, to tell him where to find Mr Paty.

They said Anzorov, who was shot dead by police, told them he wanted Mr Paty to apologise for using the cartoons. The children said they had no idea he was planning the murder.

Meanwhile, more than 1000 people gathered in drizzly rain to honour Samuel Paty where he was beheaded on Friday as he left school in Conflans-Sainte-Honorine, northwest of Paris. Mounds of bouquets of flowers were piled in front of the school.

Speaking in the Seine-St.-Denis region, Macron said a group called the Collective Cheikh Yassine will be ordered dissolved at Wednesday's Cabinet meeting.

Named after Sheikh Ahmed Yassin, a founder of the Palestinian Islamist movement Hamas who was assassinated by Israel in 2004, the group was founded in the early 2000s by a man who is among those detained for questioning. Macron did not provide details on how the group was “directly implicated” in the attack.

Interior Minister Gerald Darmanin said later on BFMTV that the person in question helped disseminate the message of a student's father against the teacher.

Macron has asked for quick, concrete action in the case.

A national memorial event will be held on Wednesday evening to pay tribute to Paty in the courtyard of Sorbonne university, a centuries-old symbol of the “spirit of Enlightenment” and “a forum to express ideas and freedoms,” the French presidency said.