Thousands gather for anti-lockdown protest in London – despite pubs, shops and gyms reopening 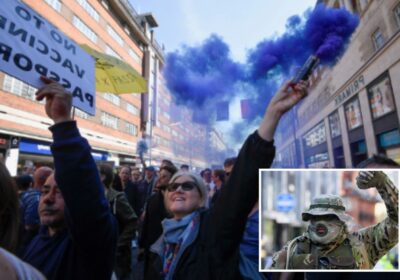 THOUSANDS have gathered for anti-lockdown protests in London – despite pubs, shops and gyms reopening.

Crowds marched through the streets for the 'Unite for Freedom' rally against Covid restrictions, vaccines and passports. 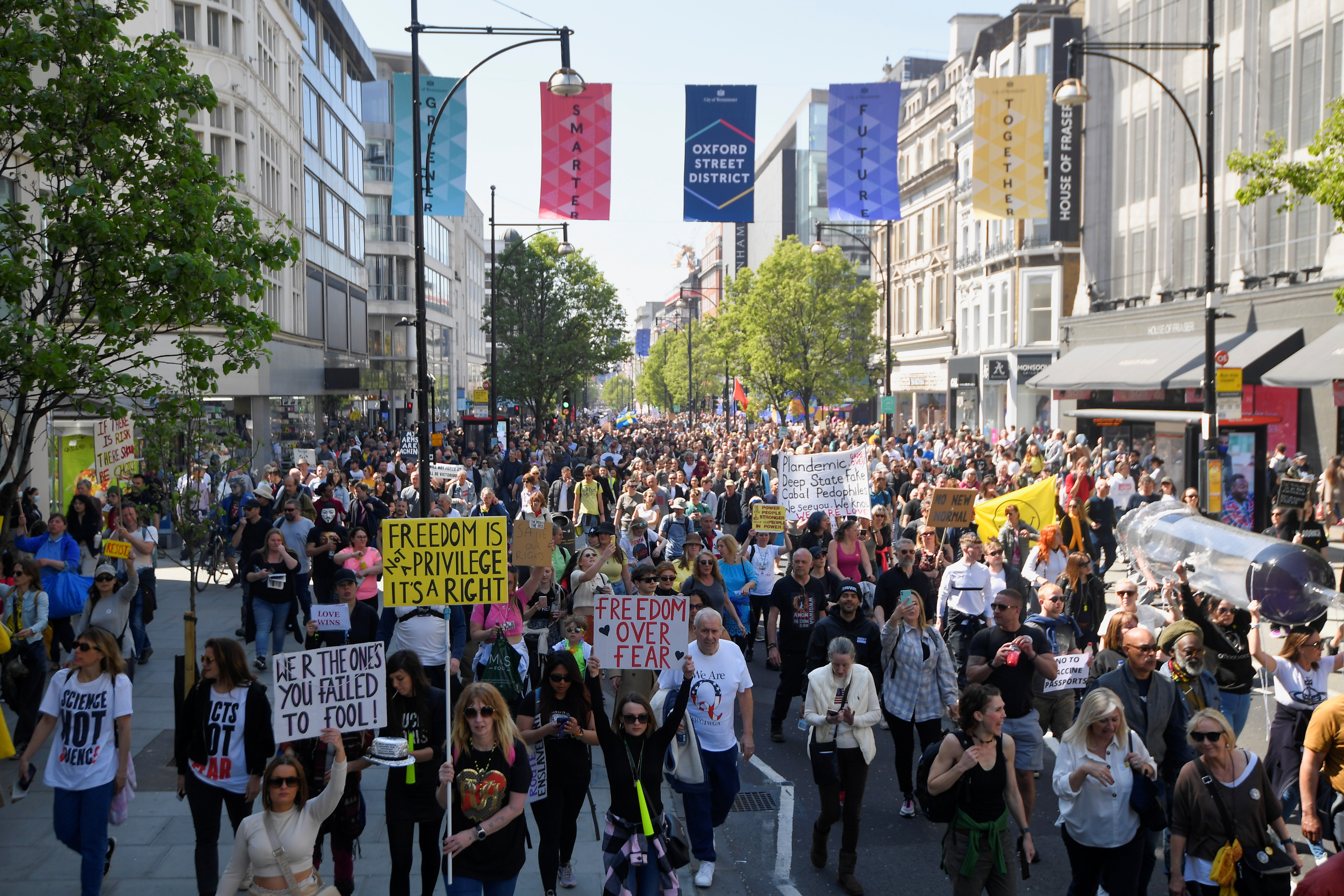 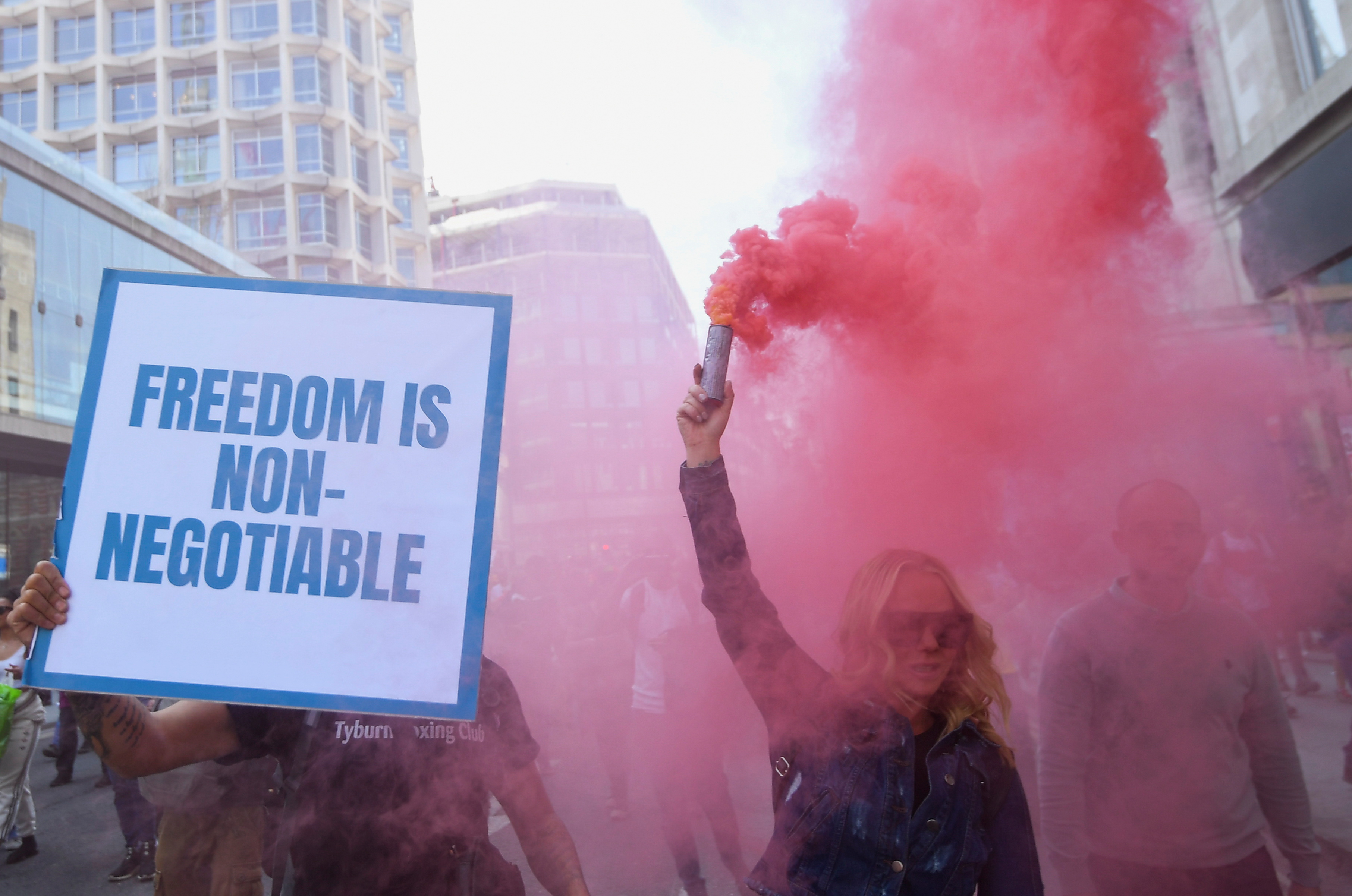 Signs saying "freedom is non-negotiable" were held up as people let off brightly coloured smoke bombs.

And activists carried giant inflatable syringes to fight against what they call "coerced vaccinations" – with not a single face mask in sight.

The mob ignored police warnings not to gather in large groups to make their way through the capital.

Cops have vowed to crack down on anti-social behaviour at hotspots over the second weekend of freedom as temperatures hit 20C. 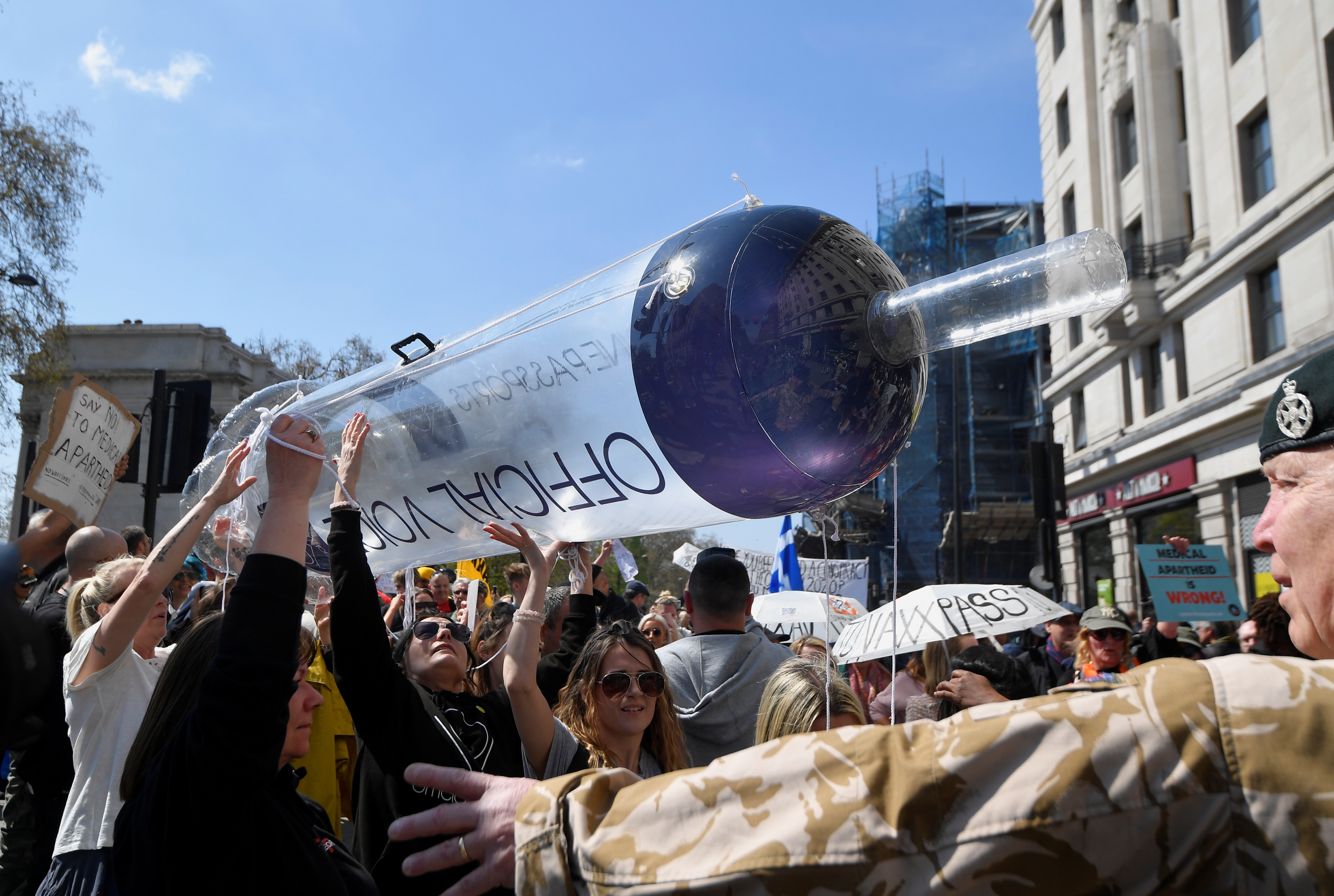 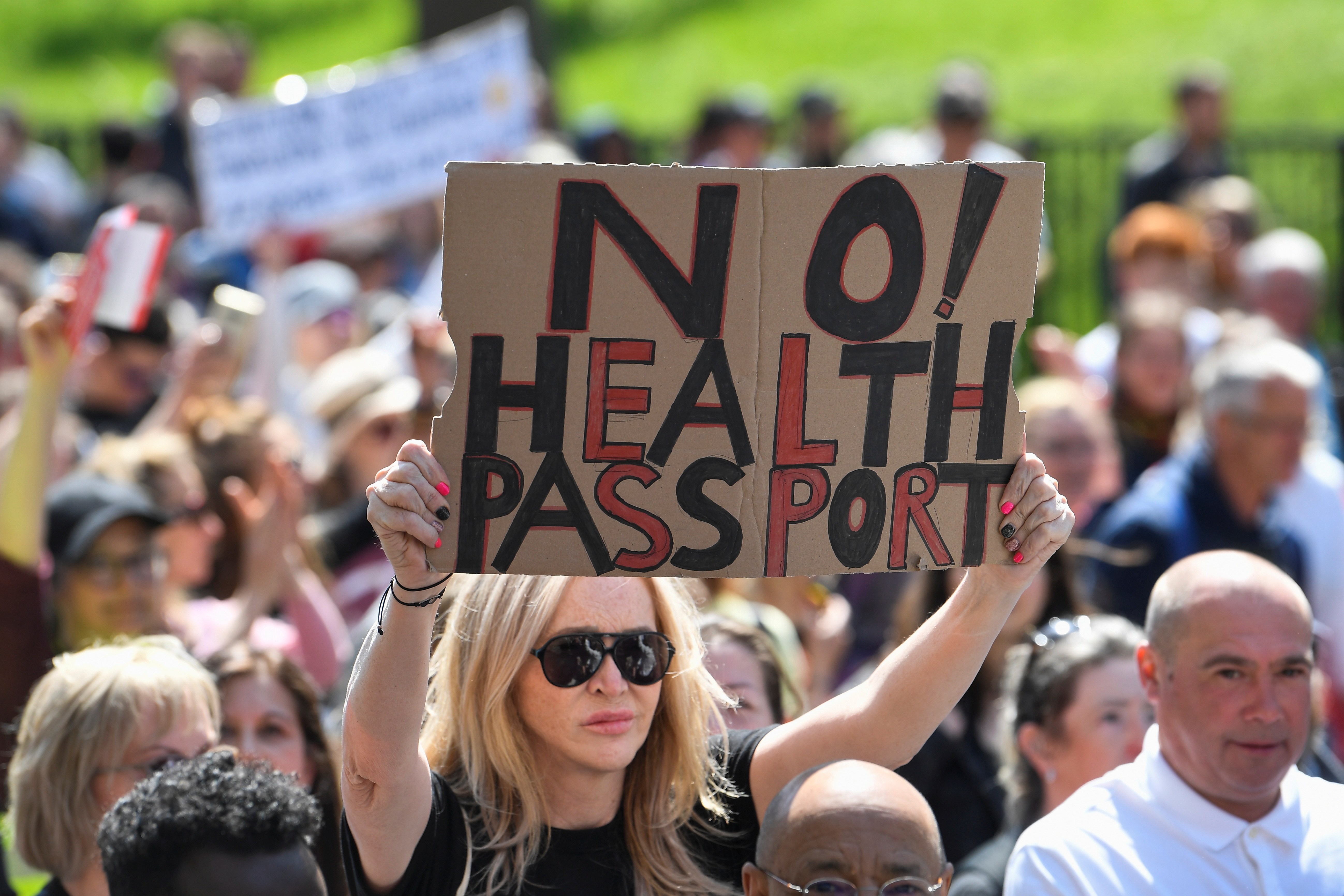 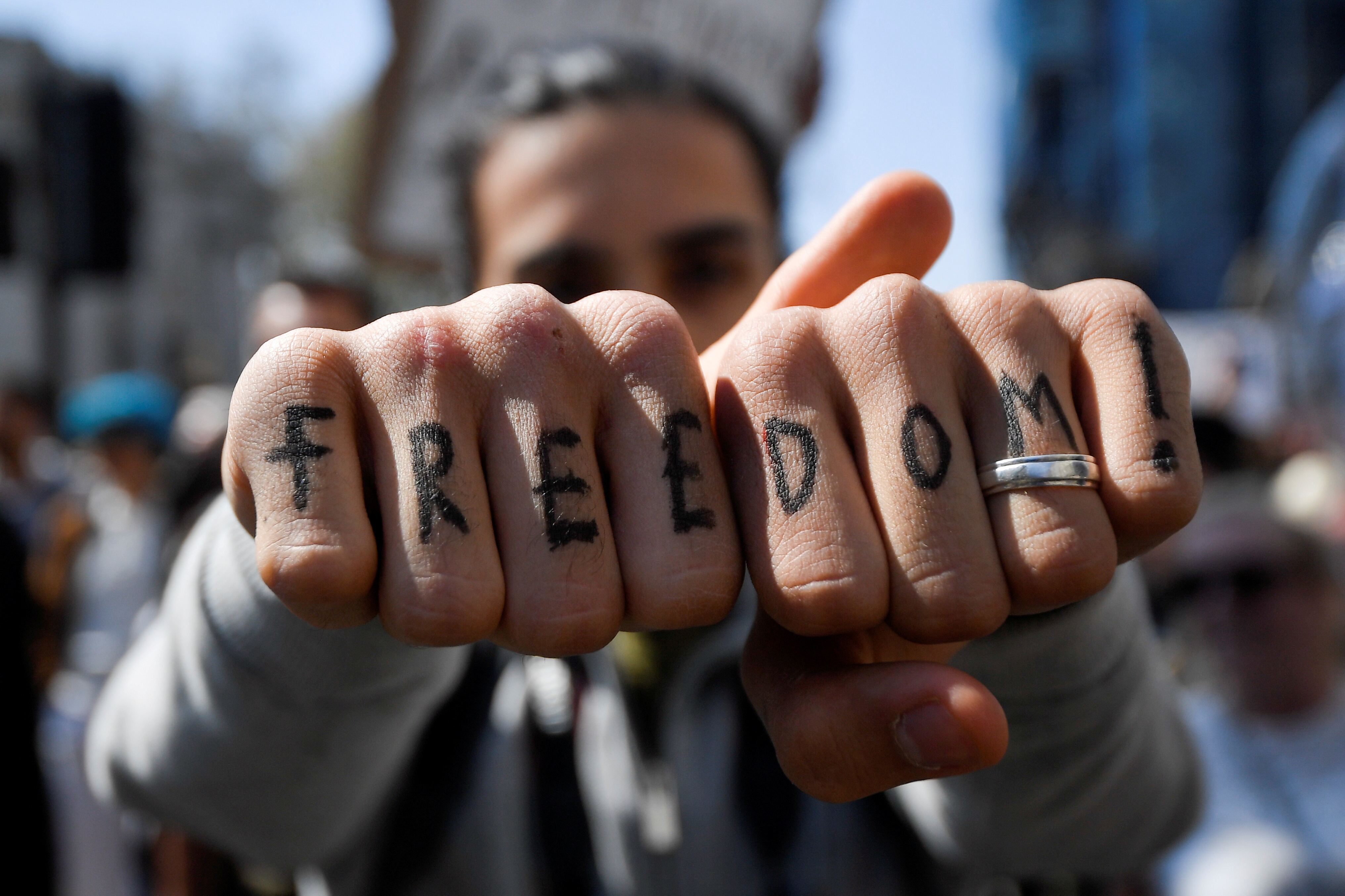 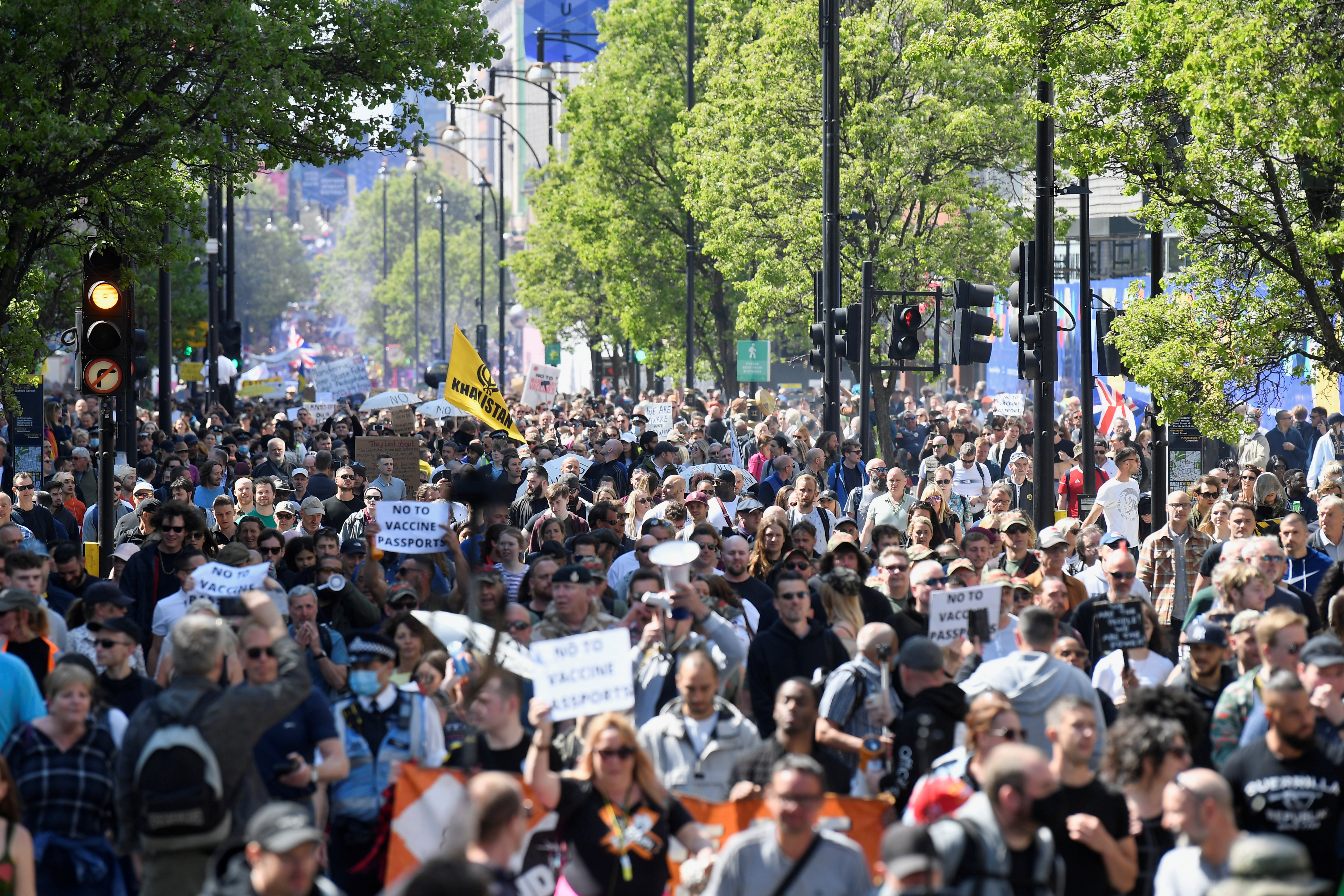 The protest organisers had urged participants to "make as much noise as possible" during the rally but to "avoid making a crowd".

However, they also encouraged people to "link arms if the police tried to intervene".

Their aim is to fight against all coronavirus precautions and "no new normal".

There appeared to be no social distancing during the event. 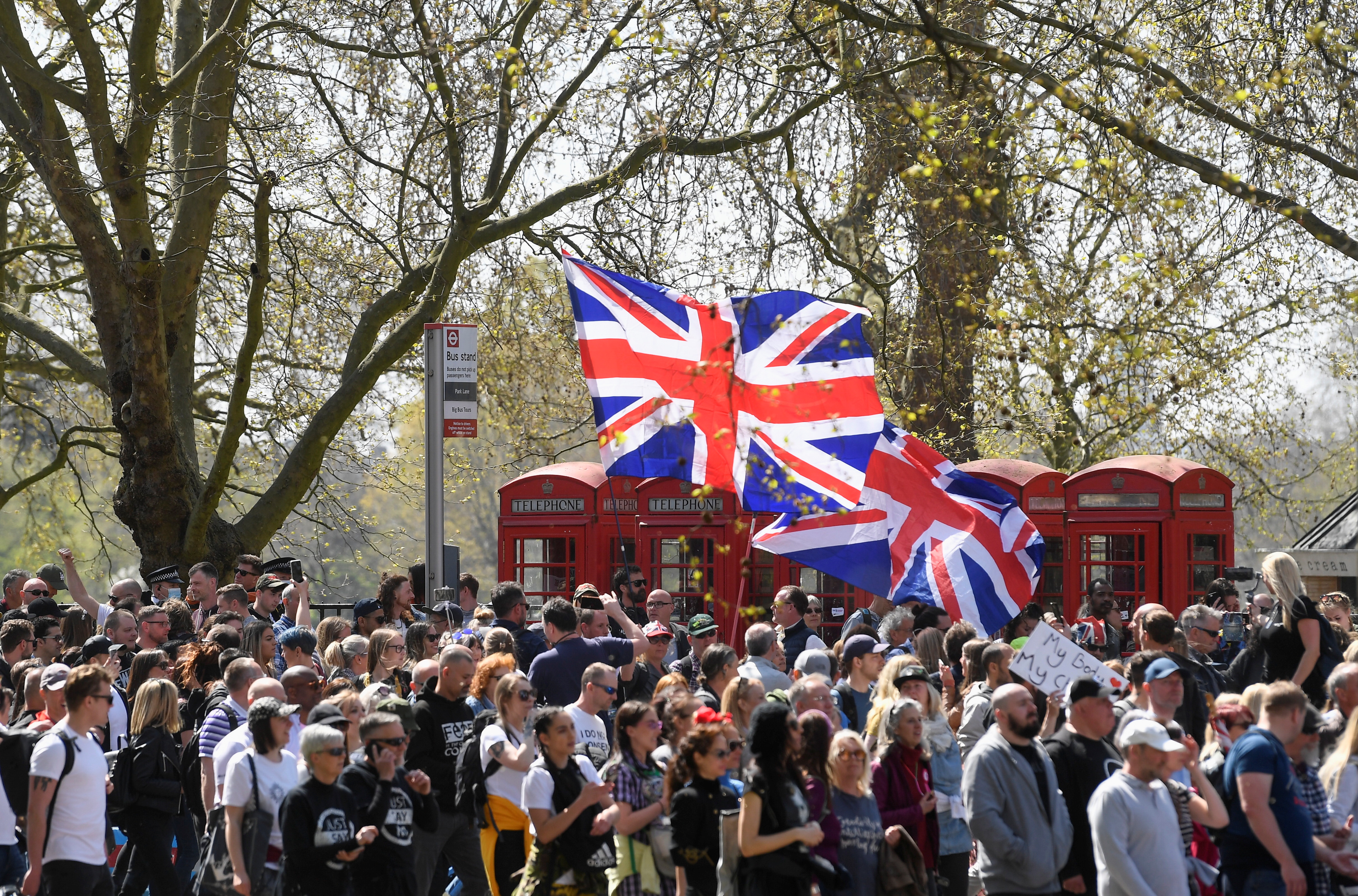 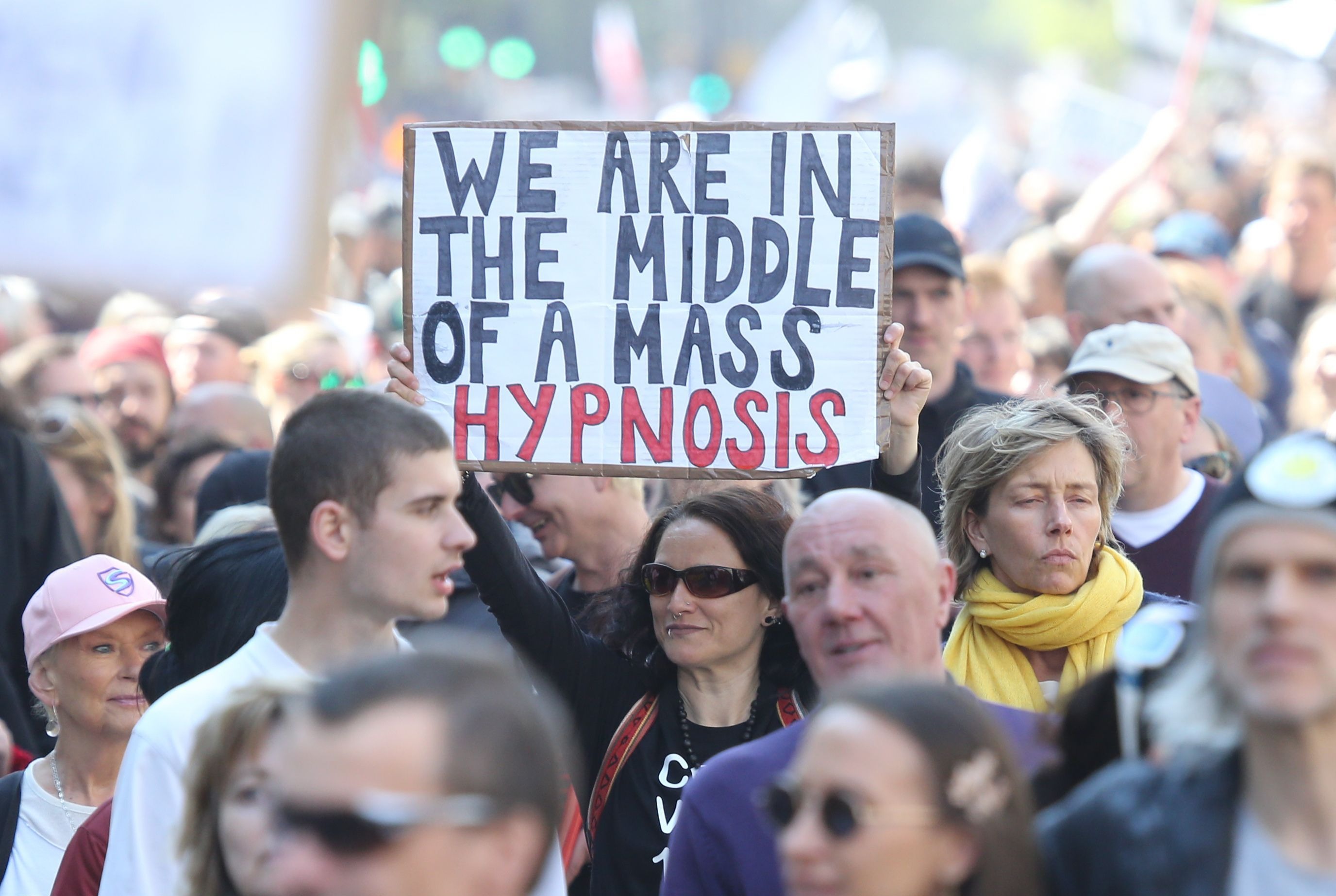 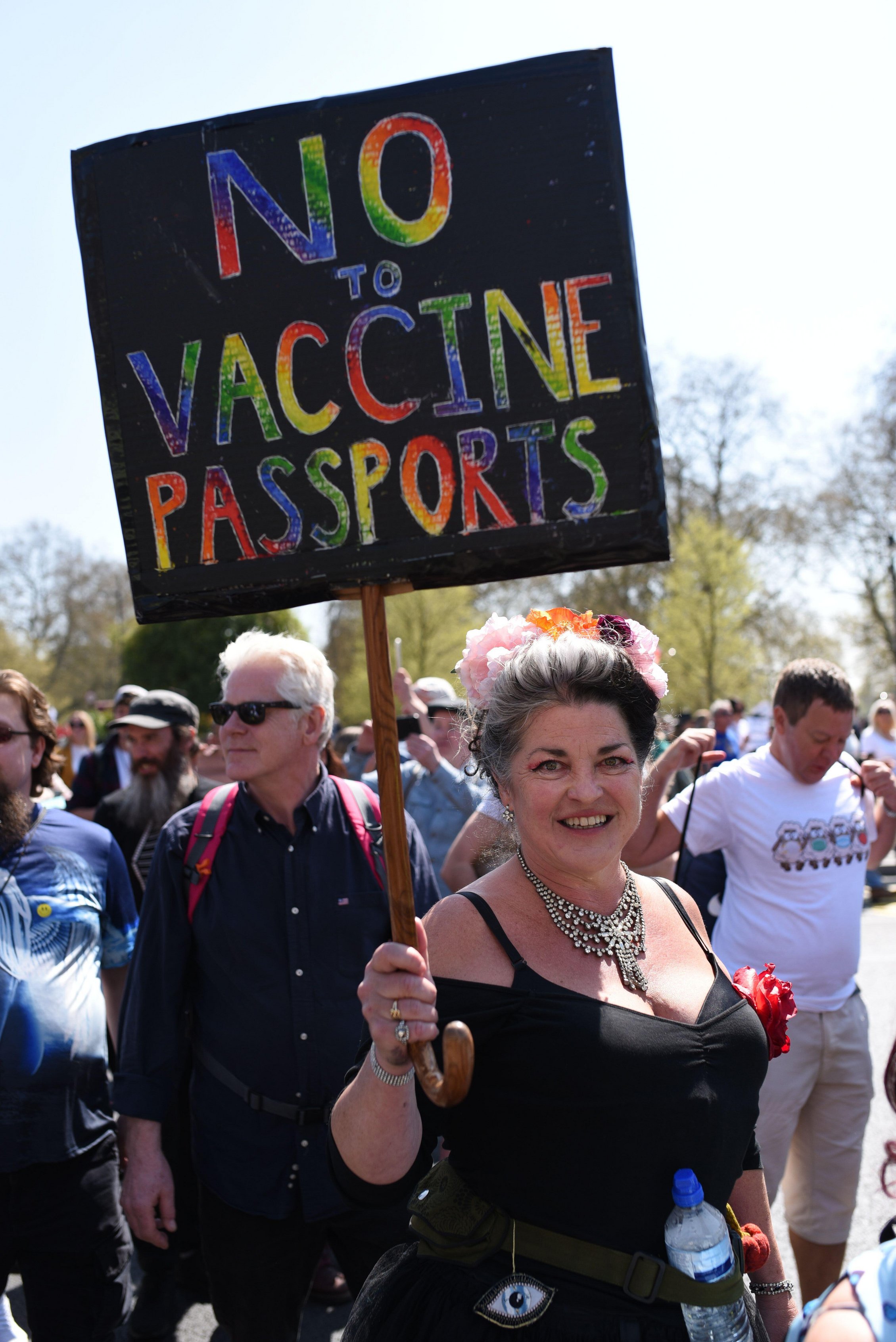 The Metropolitan Police said on Twitter: "We have a policing operation in central London today as a result of a number of demonstrations.

"Anyone coming into London for a protest must make sure their gathering is lawful, with a risk assessment carried out by the organiser.

"Officers are on site and are engaging with those taking part."

Half of Brits – more than 33.4million – have had their life-saving Covid jab in our vaccine rollout – which has allowed the country to ease lockdown restrictions. 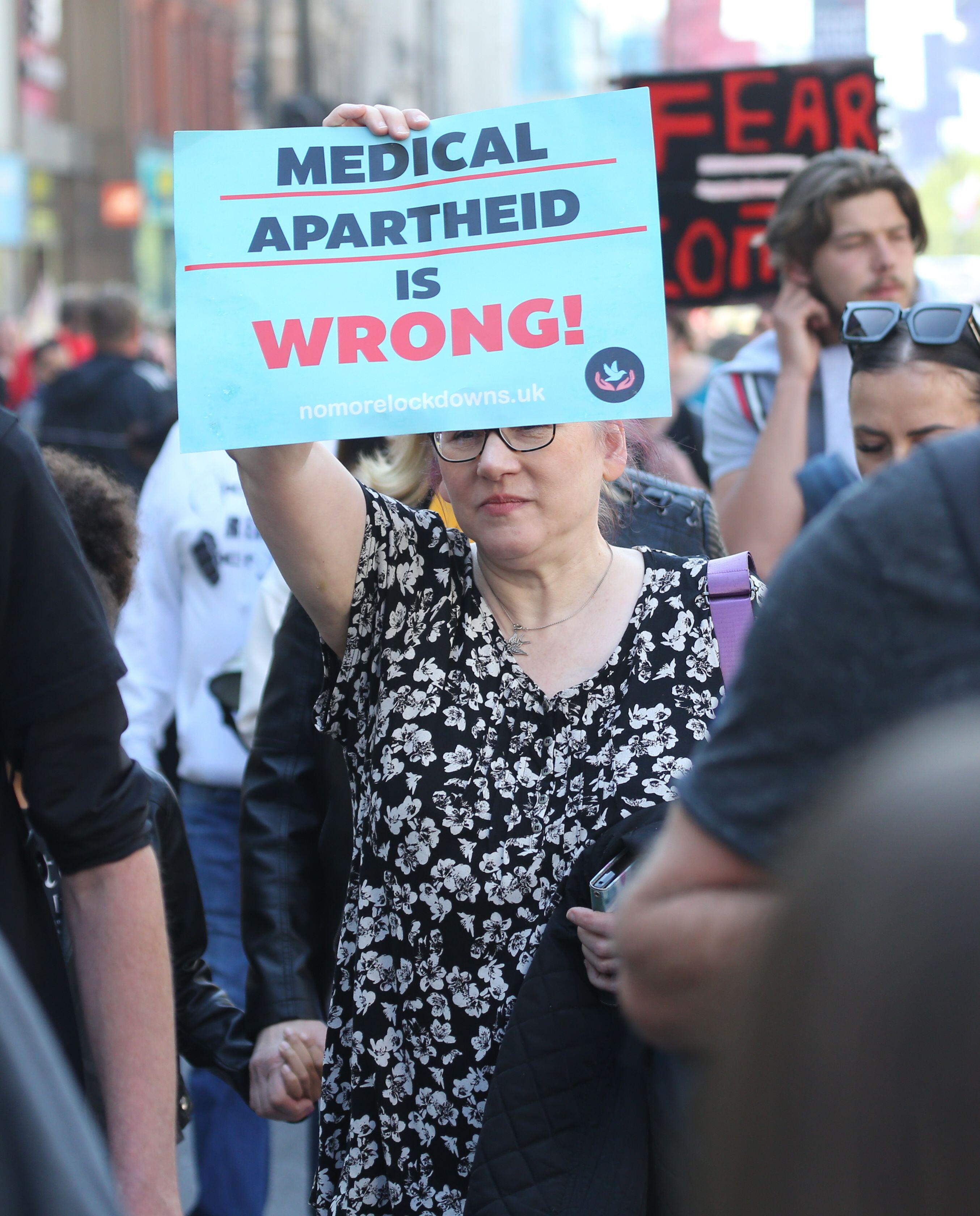 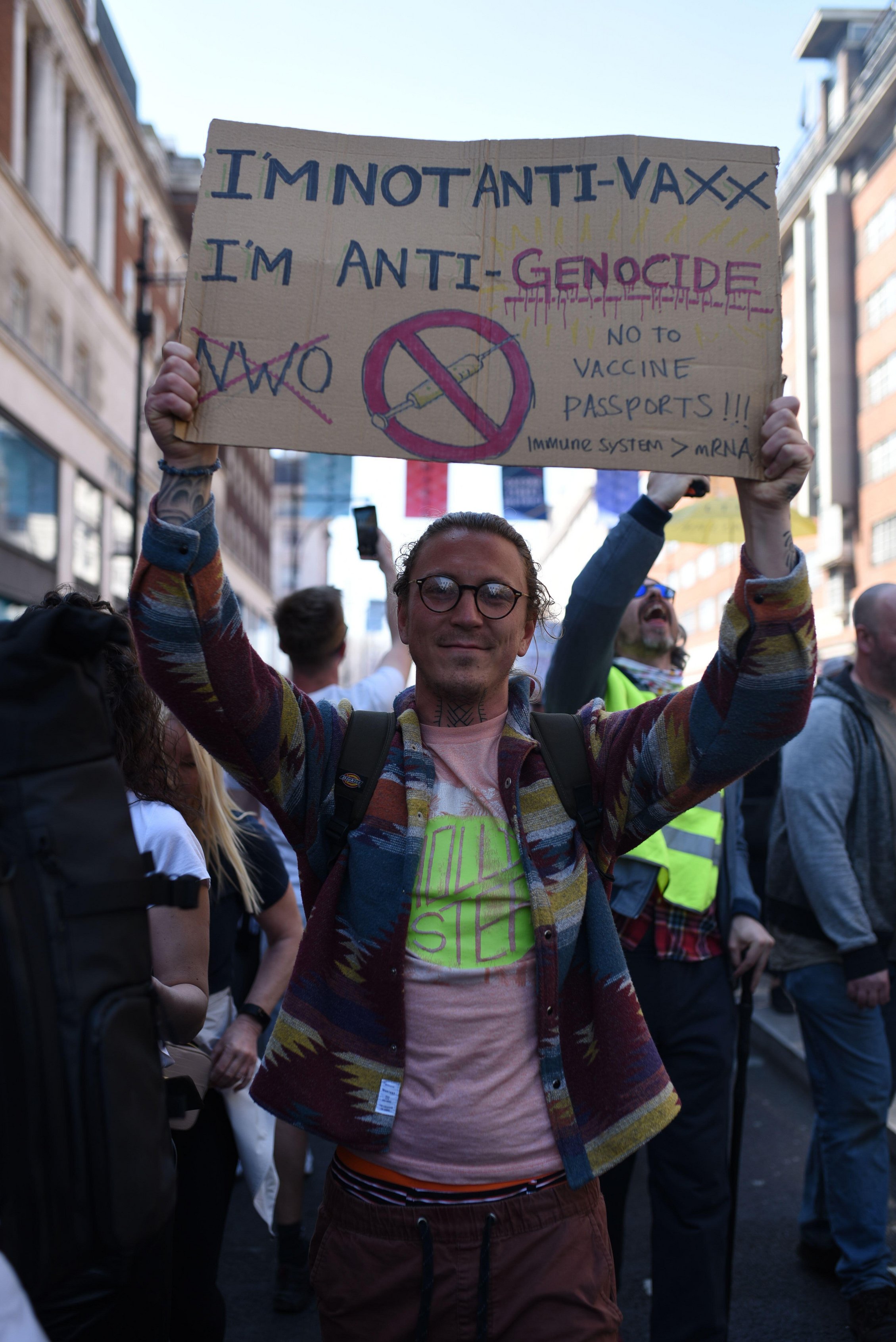 Pubs, restaurants and gyms reopened on April 12, along with zoos, theme parks and hairdressers.

Lockdown restrictions are set to ease further on May 17, allowing Brits to enjoy food and a pint indoors.

And it is hoped all restrictions should be lifted on June 21.

The Government is said to want Covid passports up and running by May 17, when foreign travel resumes, to allow holidaymakers to avoid quarantine.

But Britain's equalities watchdog has warned such measures could be unlawful and create a "two-tier society" which discriminates against the poor, migrants and ethnic minorities.

The controversial idea is one of the key reasons for today's protest.

Not only could the "passports" help Brits go on summer holidays, but they are being poised for allowing people to attend large sporting events, workplaces and even the pub.

Ministers have already confirmed a traffic light system, which will use a three-colour guide to allow Brits to return to some countries this summer.

This will put countries on a green, amber or red list depending on the risk they pose in regard to their Covid situation abroad.