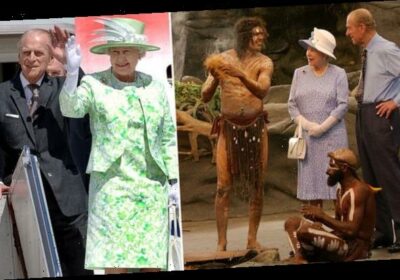 The truth behind Prince Philip’s infamous ‘spear’ gaffe: Indigenous performer insisted the comment was not racist and said he had ‘deep respect’ for the Duke

One of the Aboriginal dancers who Prince Philip infamously asked if indigenous Australians ‘still throws spears at each other’ says the comment was not racist and he had ‘deep respect’ for the royal.

The Queen’s husband died at Windsor Castle on Friday aged 99 after a long illness, with his death confirmed by Buckingham Palace at 9pm AEST.

Warren Clements, an Aboriginal performer who greeted royal couple at an event in Far North Queensland in 2002, said the dancers went off-script to try to impress them, and were honoured by their greeting.

‘We had royal fever so we said: “Let’s go out the back and throw some boomerangs and spears and hopefully we’ll get a glimpse of them as they come down.” They waved and we were showing off,’ Mr Clements told the ABC.

‘I think Prince Philip took that in, and that’s why he said it. He’s been taken out of context.’ 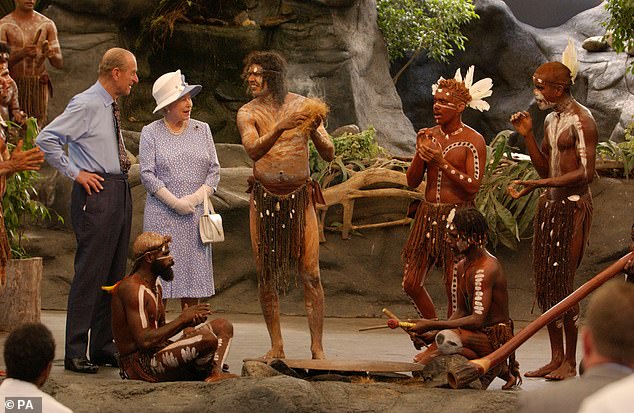 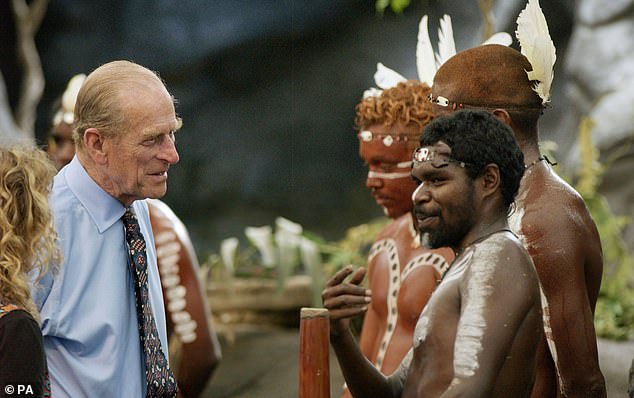 ‘People should not judge someone unless they have met them and, most importantly, do research before they start creating media sensationalism’ Mr Clements said of Prince Philip 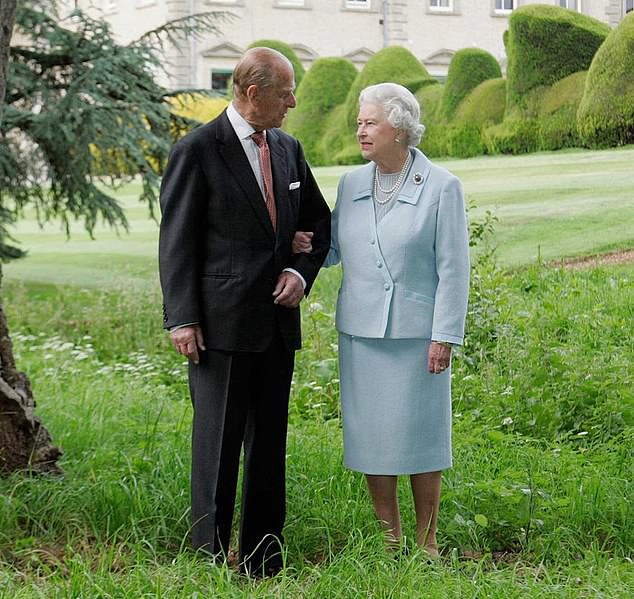 The Queen on Friday announced with ‘deep sorrow’ the death of her husband – who spent his final days at Windsor Castle after a 28-night stay in hospital for an infection and a pre-existing heart condition.

Mr Clements met the Queen and Prince Philip at the Tjapukai Cultural Centre in Smithfield during a visit that caused controversy around the world after what were perceived as racist comments from the royal.

The performer though says it was nothing but ‘media sensationalism’ and that he felt honest respect from the Queen’s husband.

‘When I shook his hand, there was so much energy… you don’t build fellas like that these days. He was tough as nails,’ he said.

‘From that moment I had a deep respect for him.

‘People should not judge someone unless they have met them and, most importantly, do research before they start creating media sensationalism.’

Prince Philip announced his retirement in May, 2017, after completing more than 22,000 solo appearances, spanning seven decades, including in Australia.

At an engagement on the day of the announcement, a guest told Philip he was sorry to hear he was standing down.

Not shy of expressing his uncensored and often politically incorrect opinions on a variety of subjects, few have been spared from his comments, including the Queen herself.

In 1994 he shouted from the deck of Britannia in Belize ‘Yak, yak, yak; come on get a move on’ as she chatted to her hosts on the quayside. 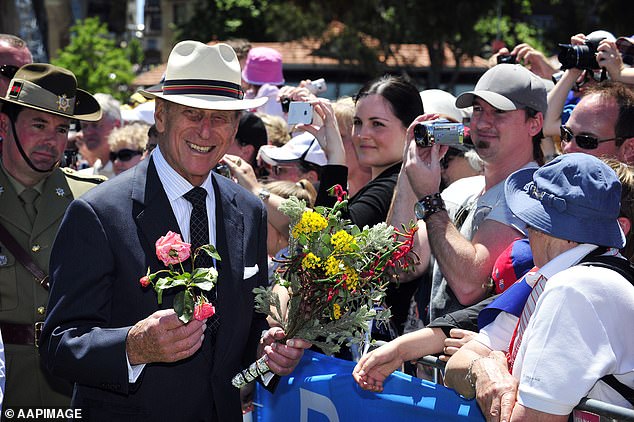 Prince Philip accepts flowers from the crowd at the Great Aussie Barbecue in Perth, 2011 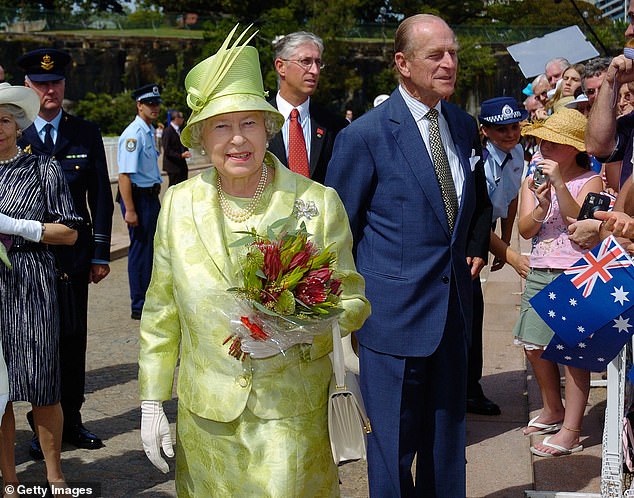 Her Majesty announced Prince Philip’s death at 9pm on Friday (AEST) as the Union Flag was lowered to half-staff outside Buckingham Palace and on public buildings across the UK and Commonwealth.

‘Australians send our love and deepest condolences to her Majesty and all the Royal family,’ Mr Morrison said on Friday evening.

‘God bless from all here in Australia… The Commonwealth family joins together in sorrow and thanksgiving for the loss and life of Prince Philip.’

Flags across Australia are flying at half staff and there will be a 41-gun salute outside Parliament House on Saturday in honour of the late royal.

The prime minister singled out the Duke of Edinburgh’s comfort to survivors of a bushfire in Tasmania in 1967 in his speech from Kiribilli House this morning.

‘As the Governor-General reminded us last night, he visited our country on more than 20 occasion,’ he said.

‘But there were also moments of deep compassion, in particular, in the terrible bushfires of 1967 in Tasmania, where he comforted the victims and he toured the burnt out Cascade Brewery.’ 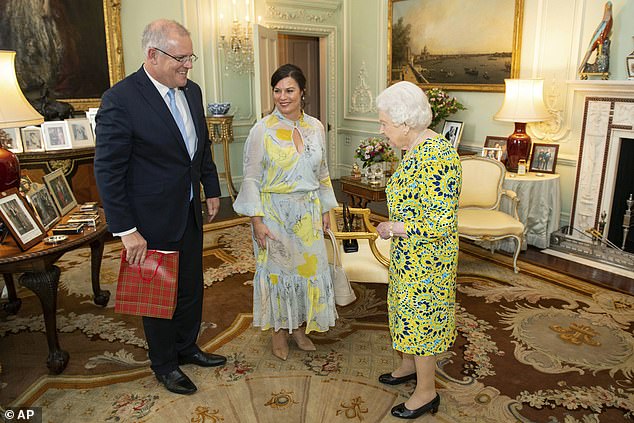 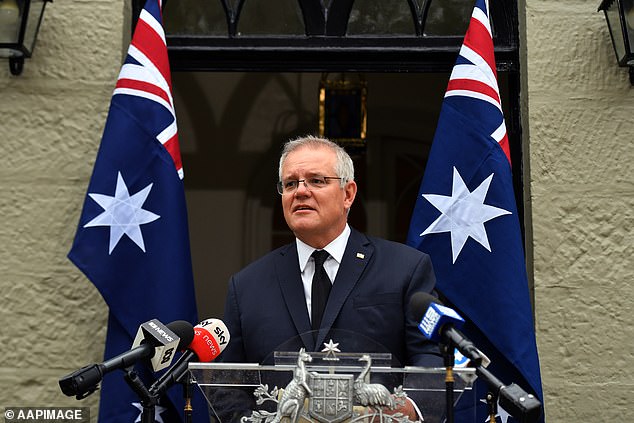 Mr Morrison said he felt particularly for the Queen, and asked she let Australia as a nation help her mourn and heal

Former Prime Minister John Howard, who was the last PM to greet the Prince to Australia, described his marriage to the Queen as ‘a partnership for the ages’ and paid tribute to his sense of humour.

‘He gave short shrift to political correctness when he encountered it, and that endeared him to millions of people,’ Mr Howard said on Saturday morning.

‘And so far from those responses constituting gaffes, they were things that people warmed to. He had quite a connection with Australia.’

Mr Morrison extended his sympathies to The Queen and assured her, and the British people, that Australia grieved with them.

‘On behalf of the Australian people, and the Australian government, I extend our deepest sympathies and condolences to Her Majesty and the royal family to the passing of the Royal Highness, the Duke of Edinburgh,’ he said.

‘Your Majesty, here in Australia, and indeed across the world, your Commonwealth family joins in your sorrow and your morning and that of your family.

‘But also, we give thanks for the life of who you described as your strength and your stay. Your Prince, Prince Philip. Husband, father, grandfather and great-grandfather.