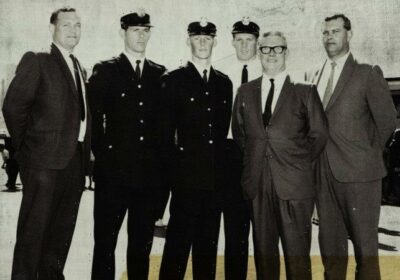 The O’Loughlin Clan is the greatest tribe in the Victoria Police, with 18 of the family joining the force. For years, it looked like Darren was going to be the odd one out.

Bootmaker Albert O’Loughlin and his wife Sylvie had eight children, with all five boys – Barry, Neil, Robert, Geoff and Doug – joining the force. 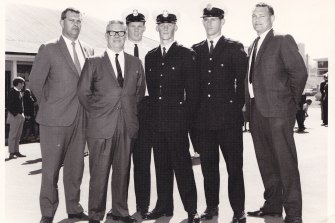 The O’Loughlin brothers with their proud father Albert.

Robert and his wife Shirley – also a police officer – believed their son Darren would take another route (unlike his brother and sister). His marks at school were not promising – not because he lacked ability but because he lacked application. Like many, when a subject didn’t interest him he shut down.

This meant he left school as soon as it was legal, with unemployment or a gap year never an option with the O’Loughlins. At the age of 15 he turned up for work at Frankston’s Hades Hot Bread Kitchen, with his shifts starting at either midnight or 2am. Welcome to the workforce.

Darren didn’t know it, but he was about to receive unique police training when his father won an eight-month scholarship to study hostage negotiation and counterterrorism.

Young Darren was taken on police ride-alongs and scuba-dived with police diving teams. (Darren absorbed the intricacies of physics needed for diving, proving he could absorb what mattered to him.)

Back in Melbourne, he started an apprenticeship as a fitter and turner before deciding a stint of hard study would beat a life of hard factory work. With the help of his girlfriend he spent two years studying to pass the police entrance exam. “Spelling was my big weakness,” he says.

In late 1983 he arrived at the Police Academy that had become a second home to the O’Loughlins.

Soon he was working in the melting pot of St Kilda, learning to develop a rapport with victims and criminals. During a stint working with the National Crime Authority he was seconded to work on the 1988 Walsh Street murders of police constables Steven Tynan and Damian Eyre.

Less than six weeks later O’Loughlin identified one of the suspects, Jedd Houghton, inside a Bendigo pub. A few days later the heavily-armed Houghton was shot dead in a Bendigo caravan park by the Special Operations Group. The head of the SOG at the time was one of Darren’s uncles.

Darren transferred to his home patch of Frankston as a detective and had a lucky escape when he managed to roll a police car on the Nepean Highway. 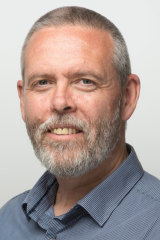 In hospital, he stood up to head to the toilet when a nurse ordered him to stop moving, informing him he had a broken neck.

For seven weeks he lay in a bed with his head tilted back so far they mounted a television upside- down for him to watch. Eventually, a piece of his hip was used to realign his spine.

Working as a detective in Frankston was both “good and bad”, he says.

One was a mechanic he charged with handling stolen car parts. Despite being guilty, the mechanic felt it was a breach of some unwritten code to be arrested by a fellow local lad and vowed revenge. “He wanted to take me out,” Darren recalls.

One night Darren saw he was being followed and – thinking they were traffic cops looking to pinch a local detective – he gunned the car to lose them. Turned out it was the manic mechanic, who was later charged with firearm-related offences.

One shift Darren was hoping for a quiet one, so he could leave the office on time and head home for his son’s second birthday. That is until he got the call that a protective services officer had stolen a gun from the office and was threatening to kill his girlfriend.

Darren and fellow detective Peter Sterling strapped on their bulletproof vests and drove off to Beach Street, Frankston. “We heard this guy was jumping neighbourhood fences and trying to escape. We got out of the car and I went up the driveway of the house.”

When he spotted the offender O’Loughlin pulled his gun and told the man to put his hands in the air and not to move. For a moment it looked like he was thinking of complying, before slipping his hands behind his back and producing the stolen gun.

The offender put the gun to his own head. Darren kept his pointed at the clearly disturbed man’s chest. When another policeman opened the side gate, the offender trained his revolver on the second cop. Although he would have been justified in taking a shot, O’Loughlin yelled at the man to regain his attention.

For five hours the two sat facing each other, both with guns cocked and fingers on the trigger.

After hours of talk they agreed to remove their trigger fingers. It was a tiny but important victory.

Darren told the man it was his son’s birthday, and it wouldn’t “be very pleasant if [the offender] blew his head off or hurt me”.

Finally, the police managed to get him a phone connected to a negotiator. The advice was more practical than psychological.

“Whatever you do, don’t lean right.”

An SOG sniper was in position with a clear shot, unless O’Loughlin moved. He didn’t. The thought of a bullet in the back of the head does wonders for one’s posture. 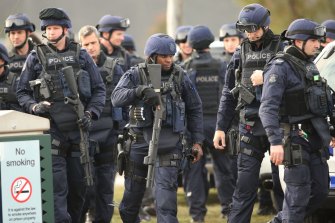 Finally, a police dog distracted the man, allowing an SOG officer to jump the fence and crack him over the head with a shotgun.

Back in the mid-1990s, Darren started to show an interest in home computers just as police were taking their first baby steps into the then tiny world of e-crime. He was recruited to the Computer Crime Squad, set up in a tiny area inside the Crime Department’s St Kilda Road building.

Long before the Dark Web there were chat rooms and soon O’Loughlin and the team identified a paedophile ring who thought they were communicating in secret.

One was a self-declared Wizard who bragged he could provide children. The squad established a false identity to infiltrate the group. “We were able to place an order for minors to be delivered,” says Darren.

The drop-off point was nominated as the Shrine of Remembrance, for two reasons: it was an open area where the Wizard would be unable to hide and “we were pretty lazy, and it was across the road from the office”.

Then there was a sliding-door moment. O’Loughlin sat the sergeant’s exam, receiving an impressive 85 per cent pass – but as there was a glut of candidates that year the promotion bar was set at 86.

Miffed by the arbitrary one per cent decision he resigned, moving into the world of cyber-security, first for accounting firm Ernst and Young. Soon he was studying “Ethical Hacking” in New York, returning as a qualified trainer in the dark arts. He was ahead of his time.

This year the Crime Department boosted the Cyber Crime Division, seen as the largest growth area in organised crime.

The police An0m app sting saw a collective of law enforcement agencies harvest an astonishing 27 million encrypted messages from gangsters – graphic proof of the size and complexity of international organised crime syndicates around the world and a signal that police must embrace cutting-edge technology if they are to be effective.

“We are thinking of running Hackathons,” says Commander Mick Frewen. The aim is to hire the best hackers to defend systems against local and international cyber-extortionists.

Police have asked for nearly 50 legislative amendments to help them deal with a new class of crime being used by an old style of criminal.

When Darren was employed by one of the big four banks, one of the general managers challenged the security team to try and crack his password. Within hours, they sent a message with it.

As the general manager was writing a note of congratulations, O’Loughlin took over his computer to write that his team was inside the system watching what he did. “We were perched on his shoulder while he worked.”

It was a graphic example of cyber-espionage.

Now the Chief Information Security Officer for the digital giant NTT, Darren protects the company and clients from the ever-present threat of cyberattacks, an area of crime he says is “enormously underestimated”.

“There are two reasons for the attacks, to make ransom demands or to steal intellectual property. It is state-funded espionage.”