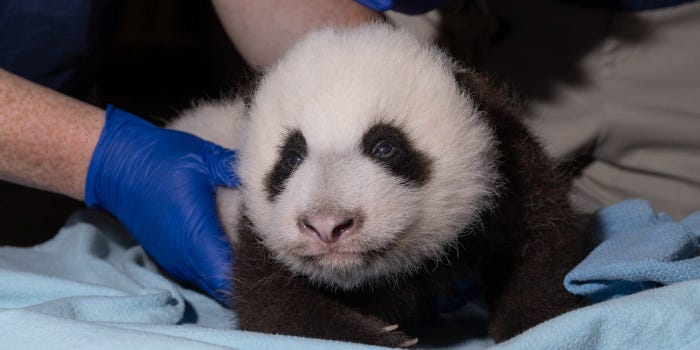 The Smithsonian National Zoo welcomed a baby giant panda 12 weeks ago and he still doesn't have a name.

The zoo in Washington, DC, has asked for help deciding on what to call the new arrival through an open vote on their website.

The zoo will announce the baby boy's name on November 23.

The newest cub, who now weighs 9.2 pounds, was born on August 21 to Mei Xiang. At 22 years old, Mei Xiang is the oldest panda in the US to give birth, according to the zoo. She was artificially inseminated with the semen from fellow giant panda Tian Tian in March.

The cub's birth was live-streamed on the zoo's giant panda cam and more than a million people have stopped in since to watch him grow, the zoo said.

At this age, the cub mostly enjoys "napping, nursing, and cuddling" with his mother, according to the zoo.

"In the middle of a pandemic, this is a joyful moment we can all get excited about," Don Neiffer, chief veterinarian at the zoo, said in a statement shortly after the panda's pregnancy was confirmed this summer. "We are optimistic that very shortly she may give birth to a healthy cub or cubs."