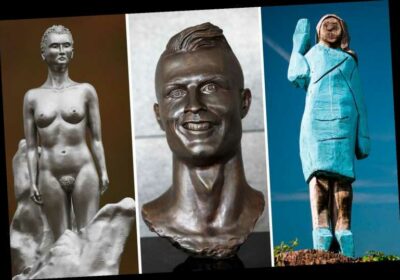 A STATUE created in your likeness should be a great honour – but sometimes the results can be a little jarring.

The rogues gallery of unfortunate statues gained a new entrant this month when the University of Winchester announced a new £24,000 sculpture of activist Greta Thunberg. 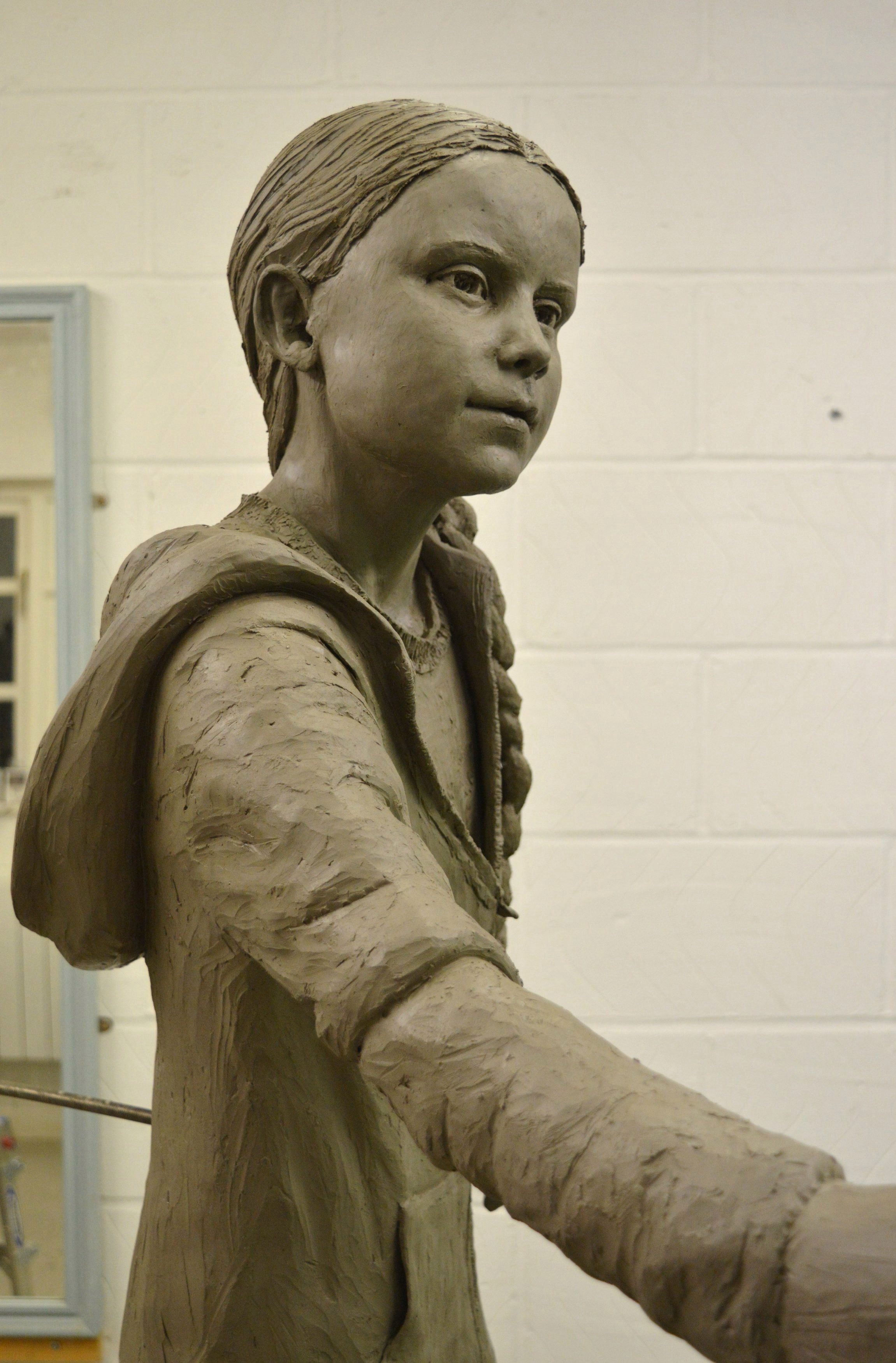 Puzzled locals have asked why Ms Thunberg was chosen as the Swedish teen has no connection to the city.

One resident argued the local Big Issue seller would have been a better pick.

But over the years countless celebrity statues have been torn down in the court of public opinion – here's the best of them.

A weathered 8ft statue of female pirate lovers Anne Bonny and Mary Read whipped up a storm when it appeared on a Devon beauty spot in February.

The statue by Amanda Cotton came under fire from all sides. 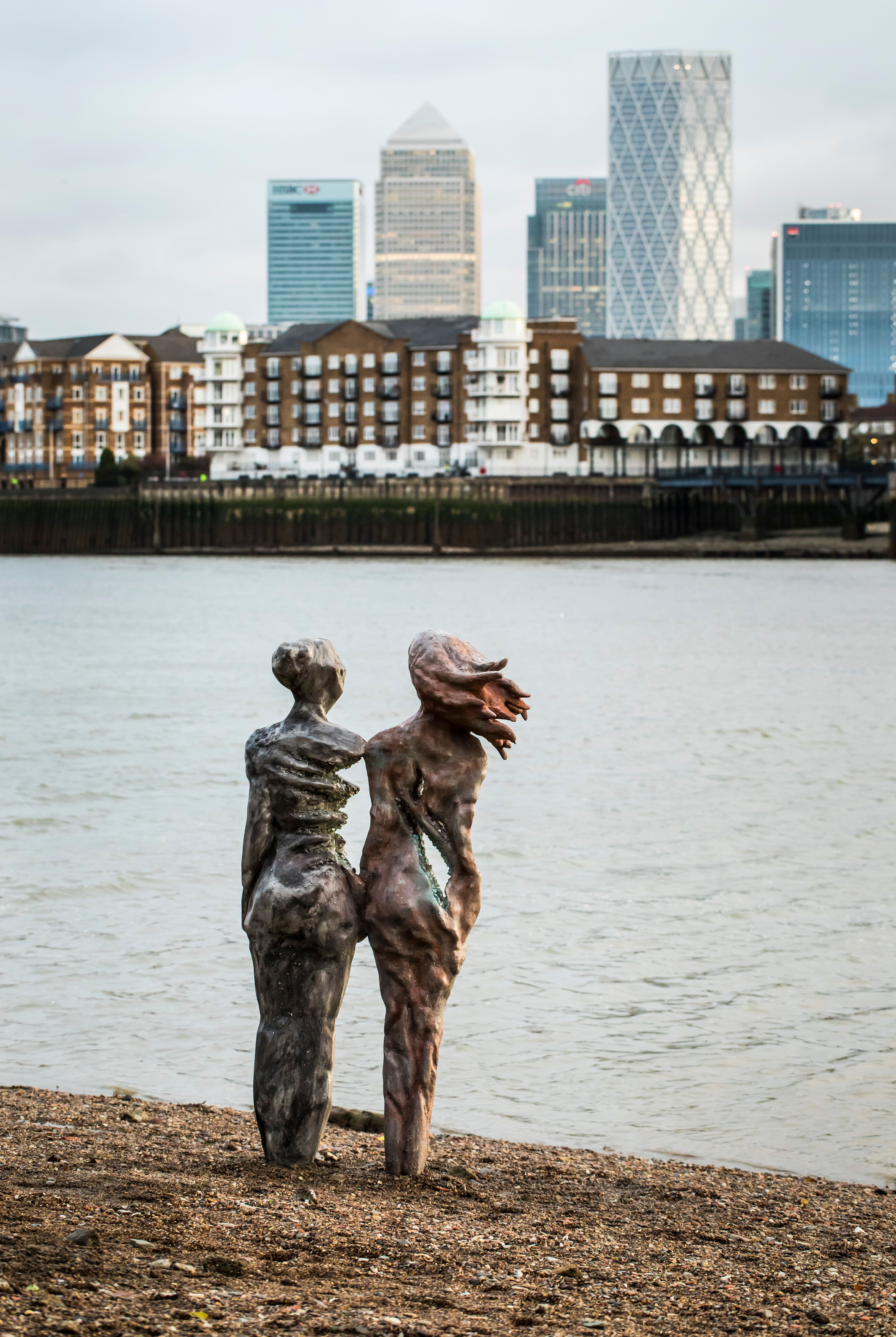 Some dismissed the sculpture as “a patriarchal view of two skinny women with holes cut out”, while others argued a tribute to the local pilchard industry would have been better.

The 18th century female duo were notorious for wreaking havoc across the Caribbean – they were ultimately caught and sentenced to death in Jamaica in 1720. 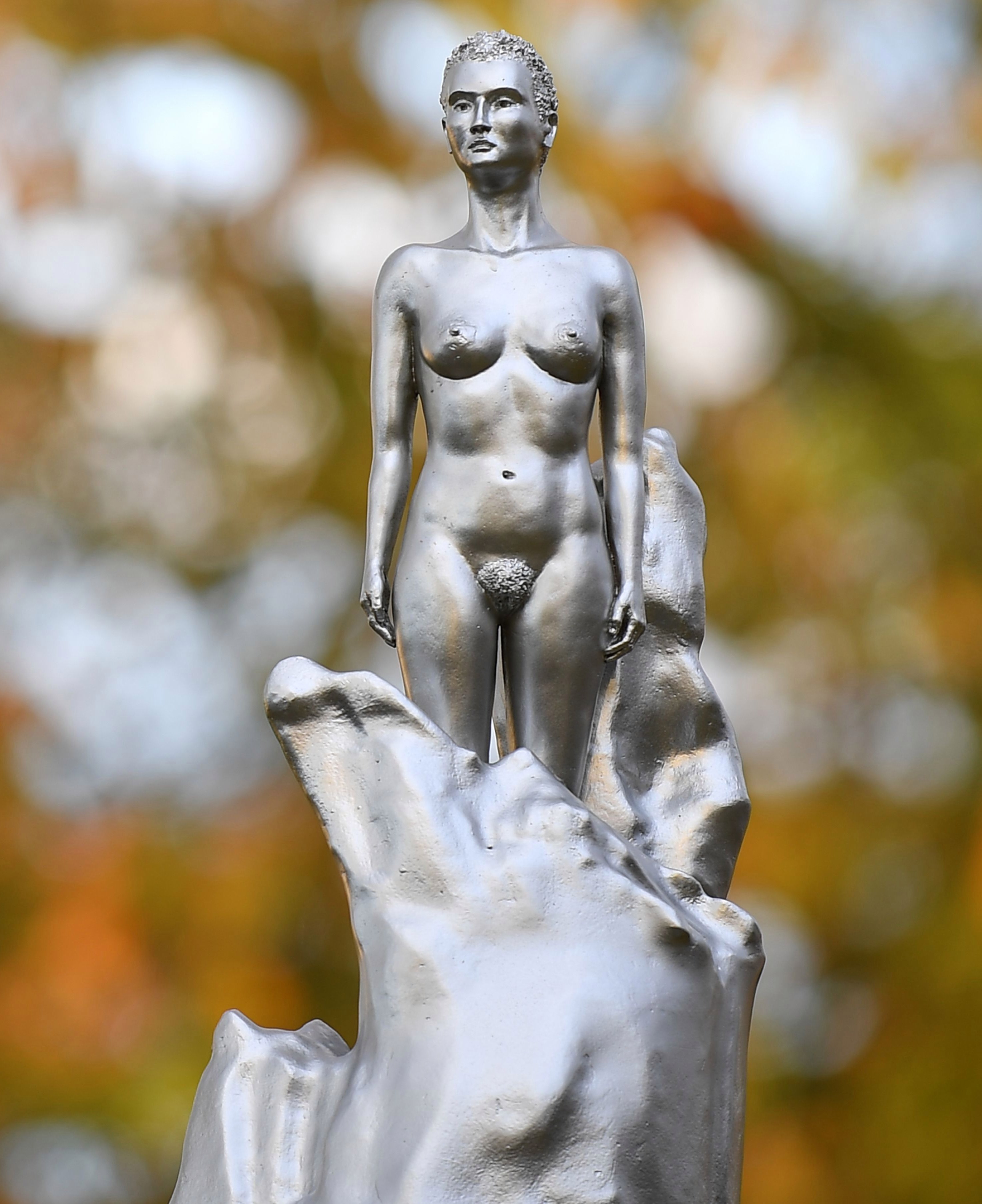 But Maggi Hambling insists her creation was intended as a statue for Wollstonecraft, not of her.

This bust of Cristiano Ronaldo's head was met with howls of derision when it was unveiled at Madeira airport in 2017.

Ronaldo himself didn't seem particularly upset with it at the ceremony, but critics said it looked nothing like him. 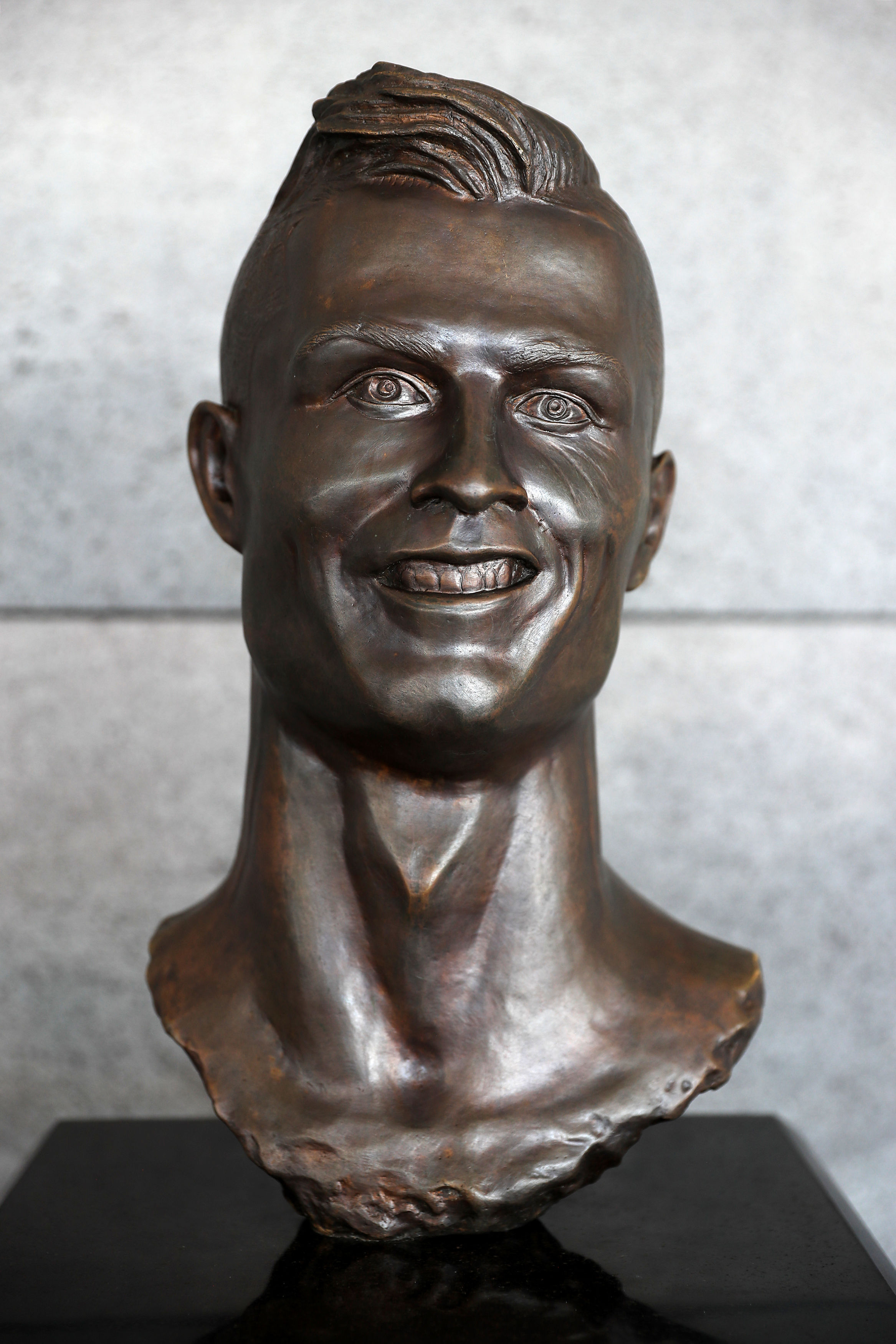 "It is impossible to please the Greeks and Trojans," artist Emanuel Santos said in defence of the bust.

"Neither did Jesus please everyone… This is a matter of taste, so it is not as simple as it seems. What matters is the impact that this work generated."

Two terrifying 12ft terracotta heads of the Queen and the Duke of Edinburgh stand in a front garden on the outskirts of Windsor, not far from Windsor Castle.

Owner Ben Bennett found the regal sculptures in a house clearance and decided to erect them in his garden in Oakley Green. 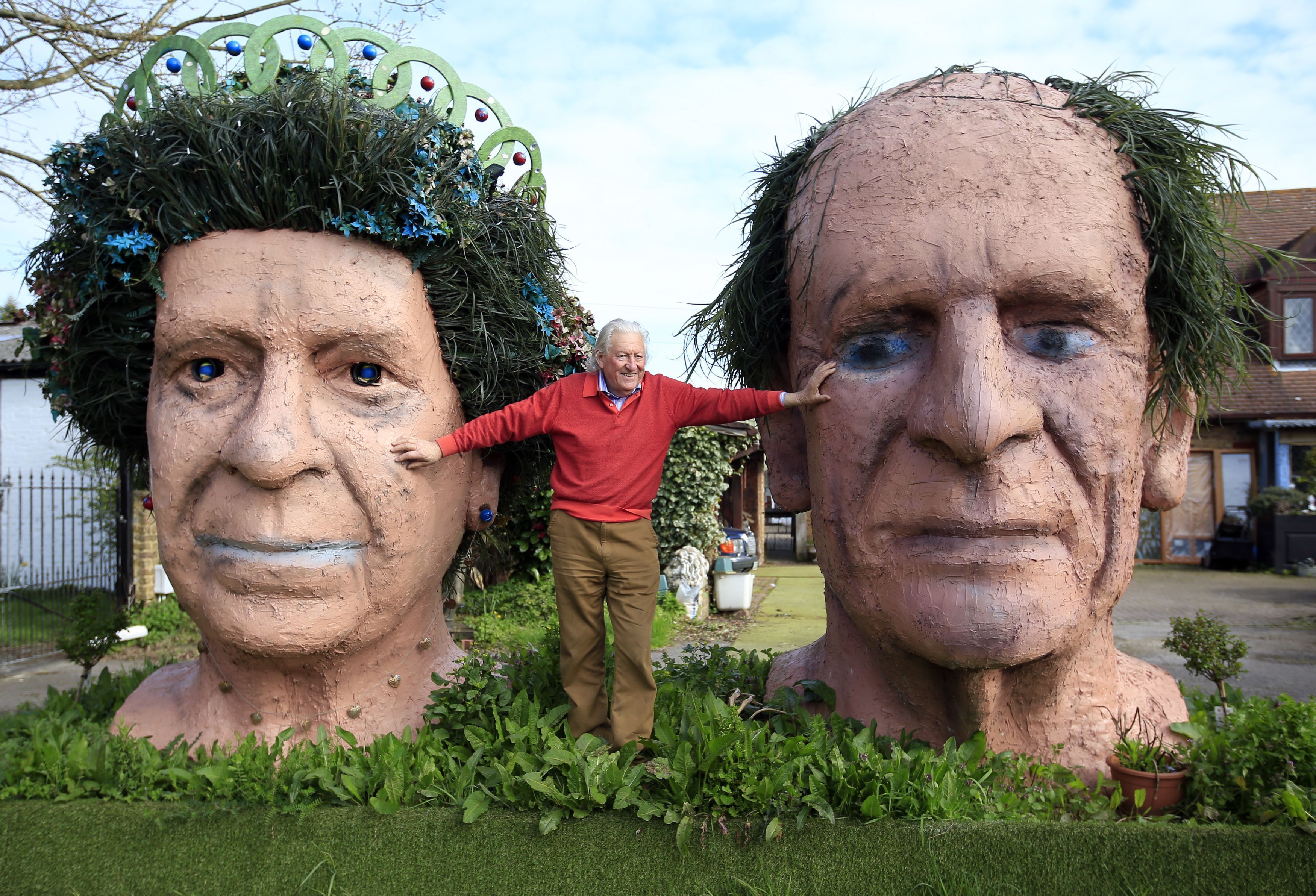 "When I first had them, I was in the front room looking out of the window and I saw five or six Range Rovers pull up," Bennett told The Telegraph.

Tennis ace Andy Murray has also had the dubious honour of being immortalised in terracotta.

Organisers of the Shanghai Rolex Masters unveiled a terracotta warrior statue supposedly of him in 2011 to celebrate his 2010 tournament win. 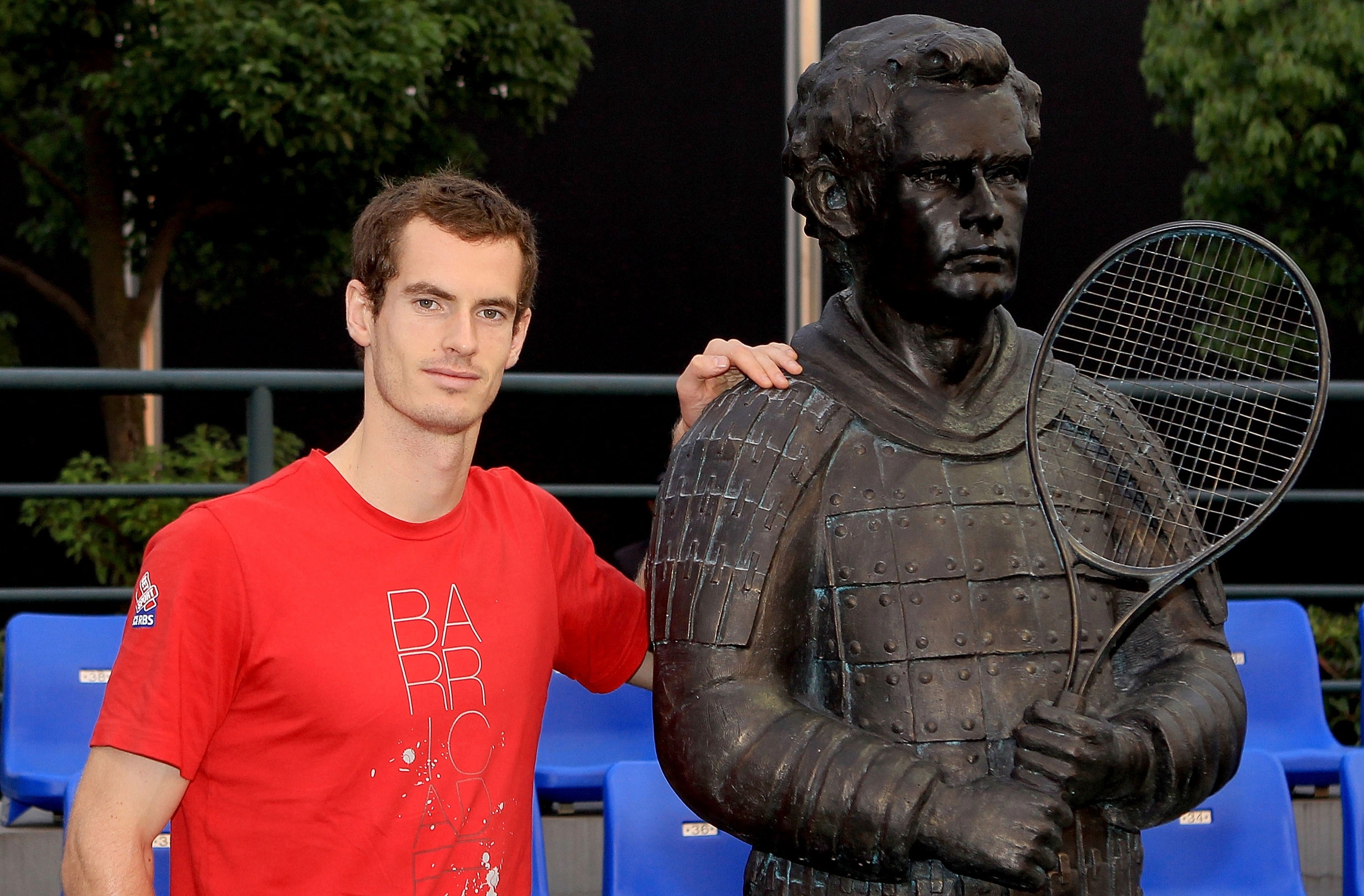 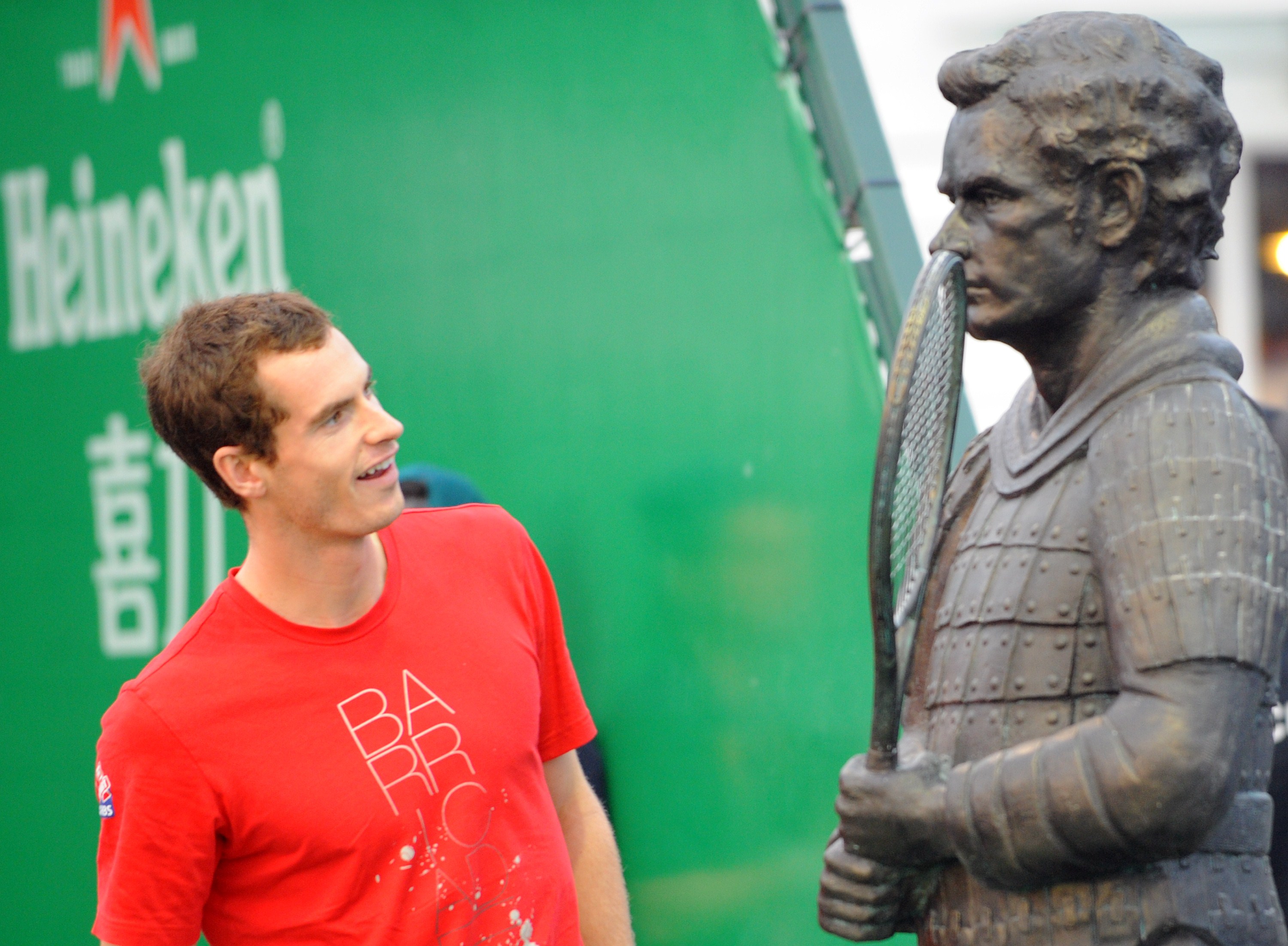 The humble champion did his best to look pleased for cameras, but critics said it looked more like Colin Firth than him.

Remarkably, Firth is linked with another skewered sculpture.

A 12ft version of his Mr Darcy emerging from the lake in Pride and Prejudice was placed in the Serpentine in Hyde Park in London in 2013. 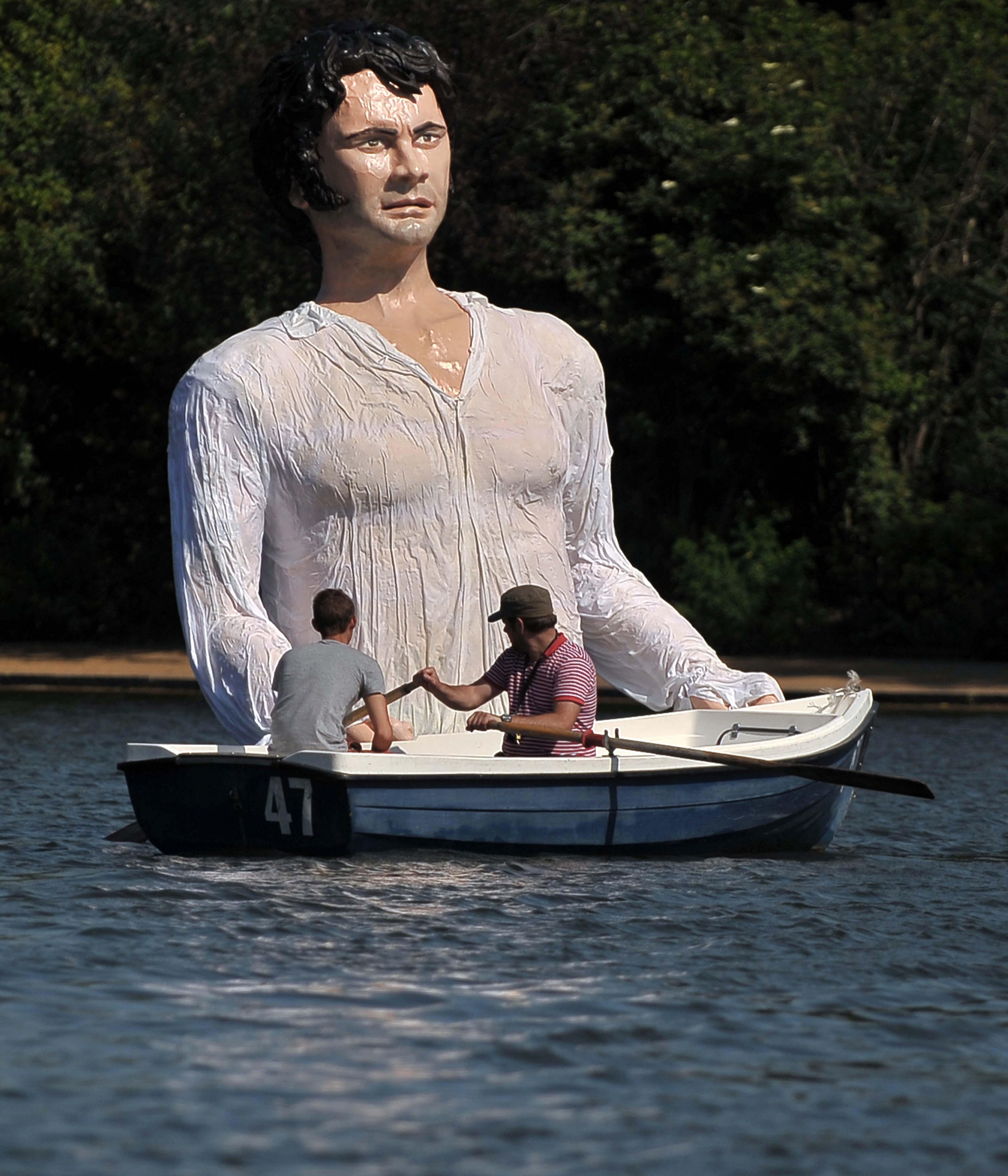 The scene in the 1995 adaptation of Jane Austen's novel was once voted the most memorable moment in a British TV drama.

But some critics wanted to forget the sopping fibreglass sculpture.

Fellow actor Johnny Depp unveiled a statue of himself at a Serbian film festival in 2010.

The Pirates of the Caribbean star managed to keep a straight face when he saw the sculpture, which was supposed to capture his character from the film Arizona Dream (1993). 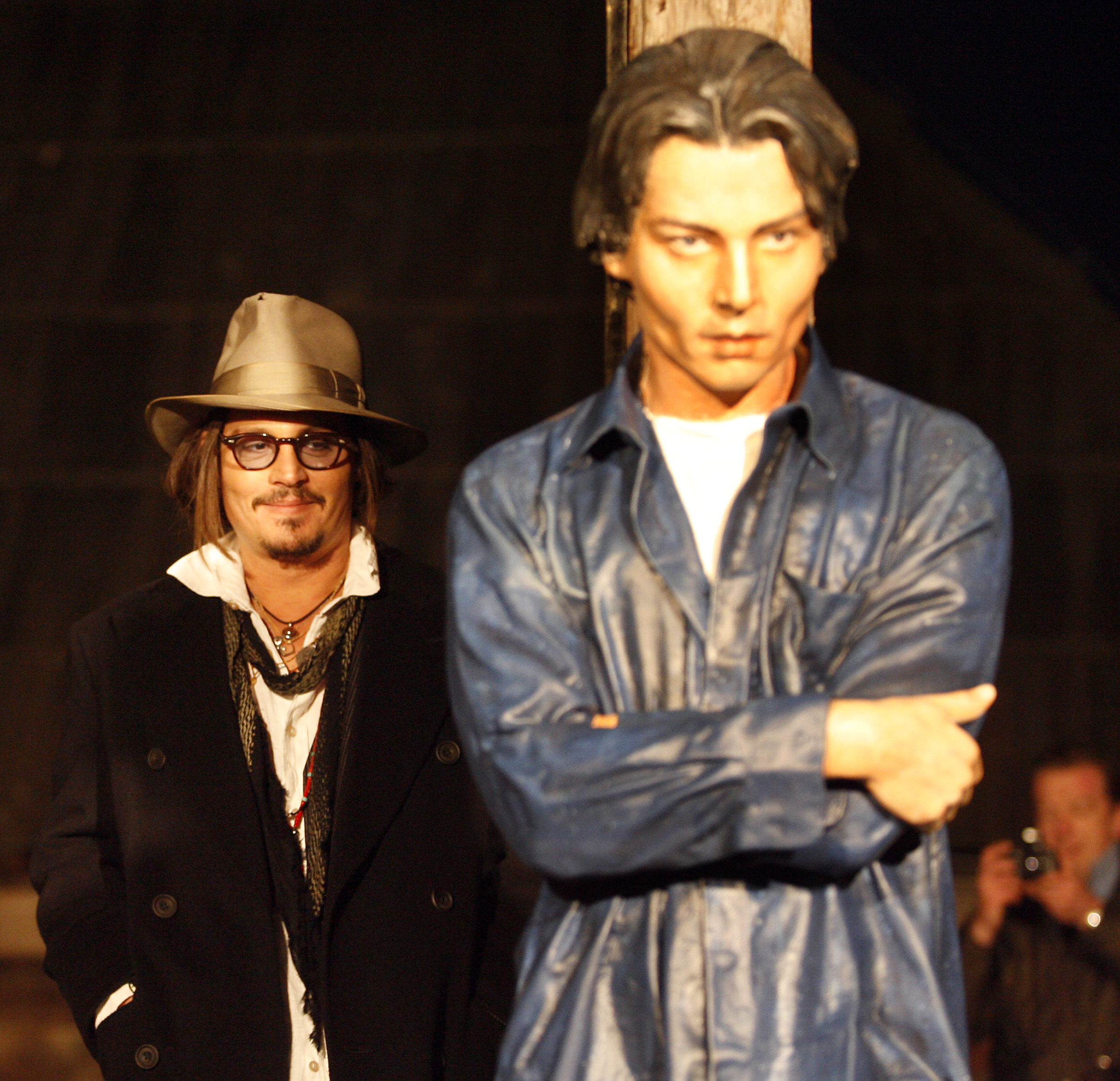 Hollywood legend Lucille Ball was honoured with a statue in her New York hometown of Celoron.

But the statue ended up being dubbed "Scary Lucy" by locals for its frightening facial expression. 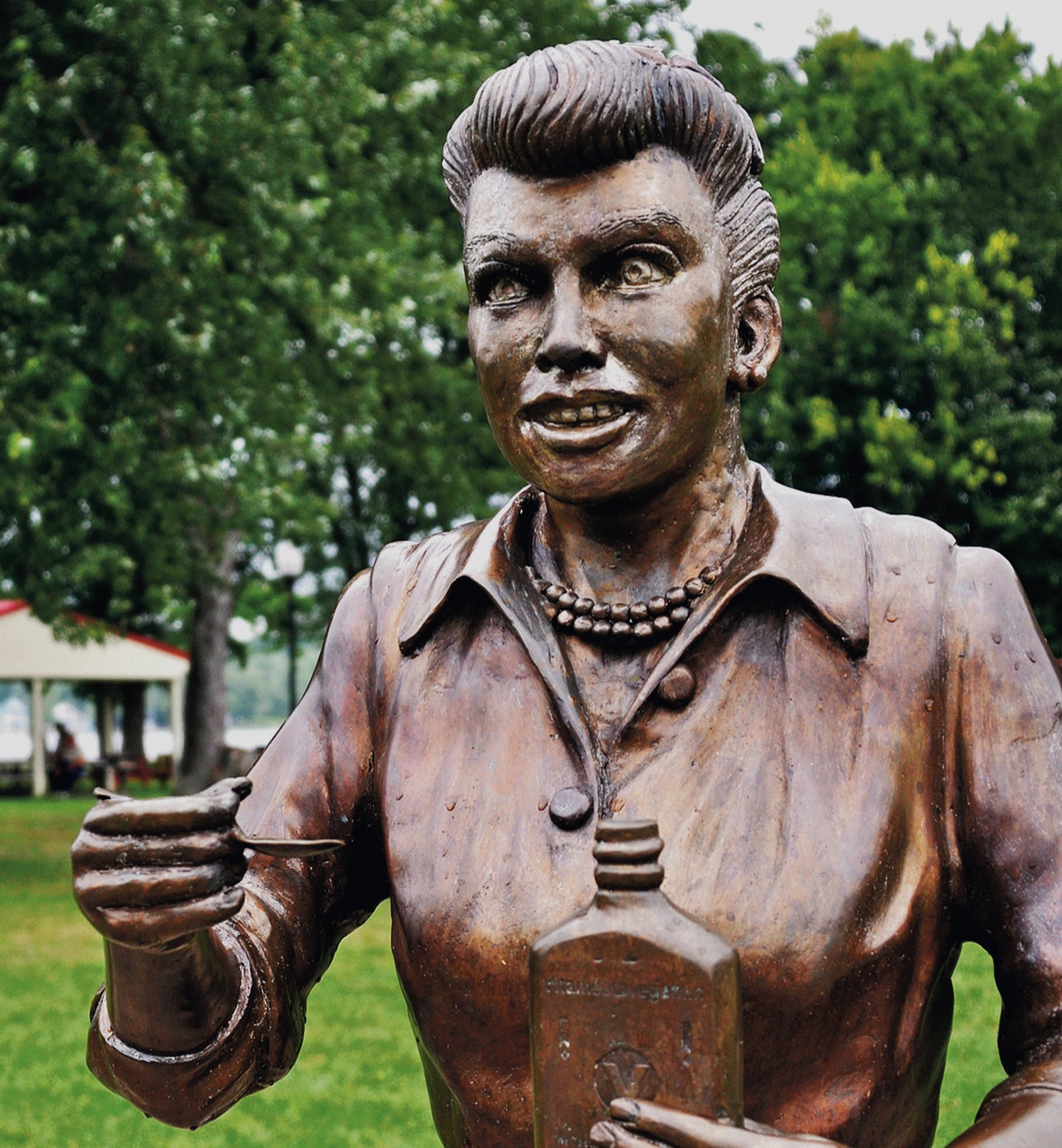 Artist Dave Poulin admitted the work was "unsettling", and said he received death threats over it.

He kindly offered to redo it for free, but it was replaced with a sculpture by a different artist on what would have been Ball's 105th birthday in 2016.

Like Ball, Melania Trump was treated to a statue in her likeness near her hometown of Sevnica, Slovenia. 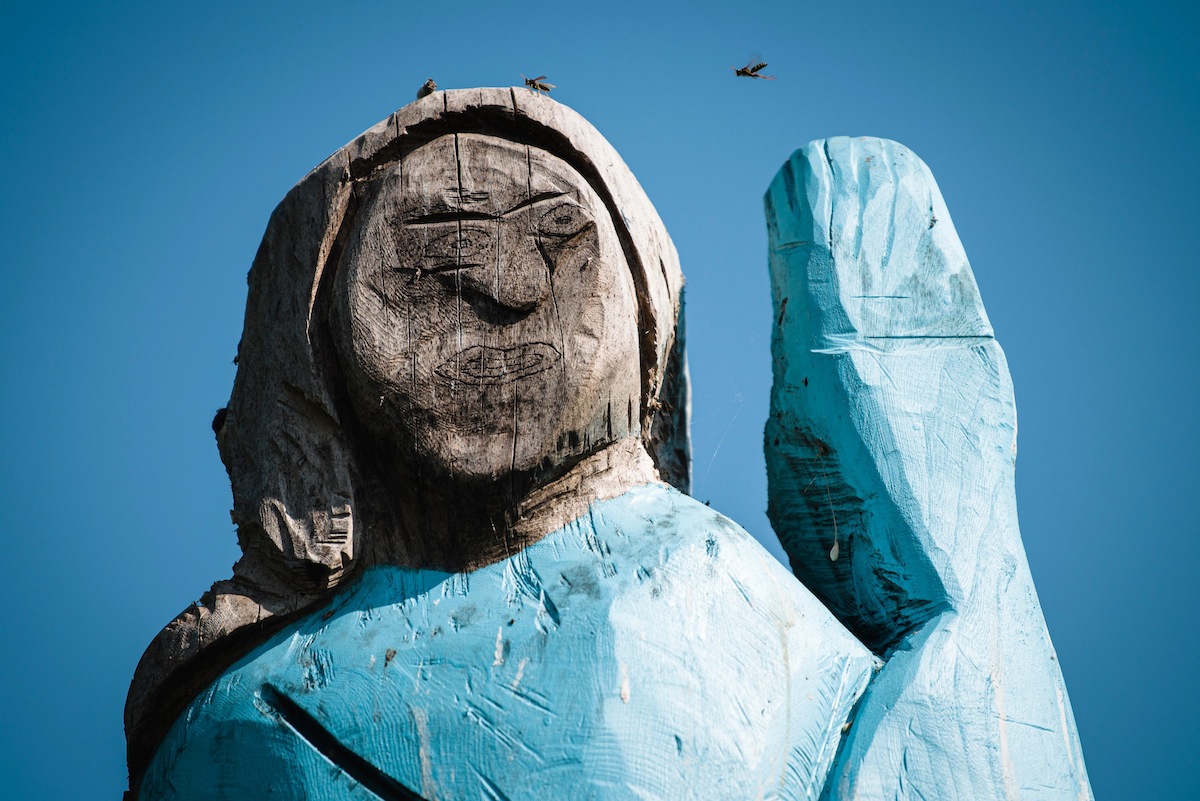 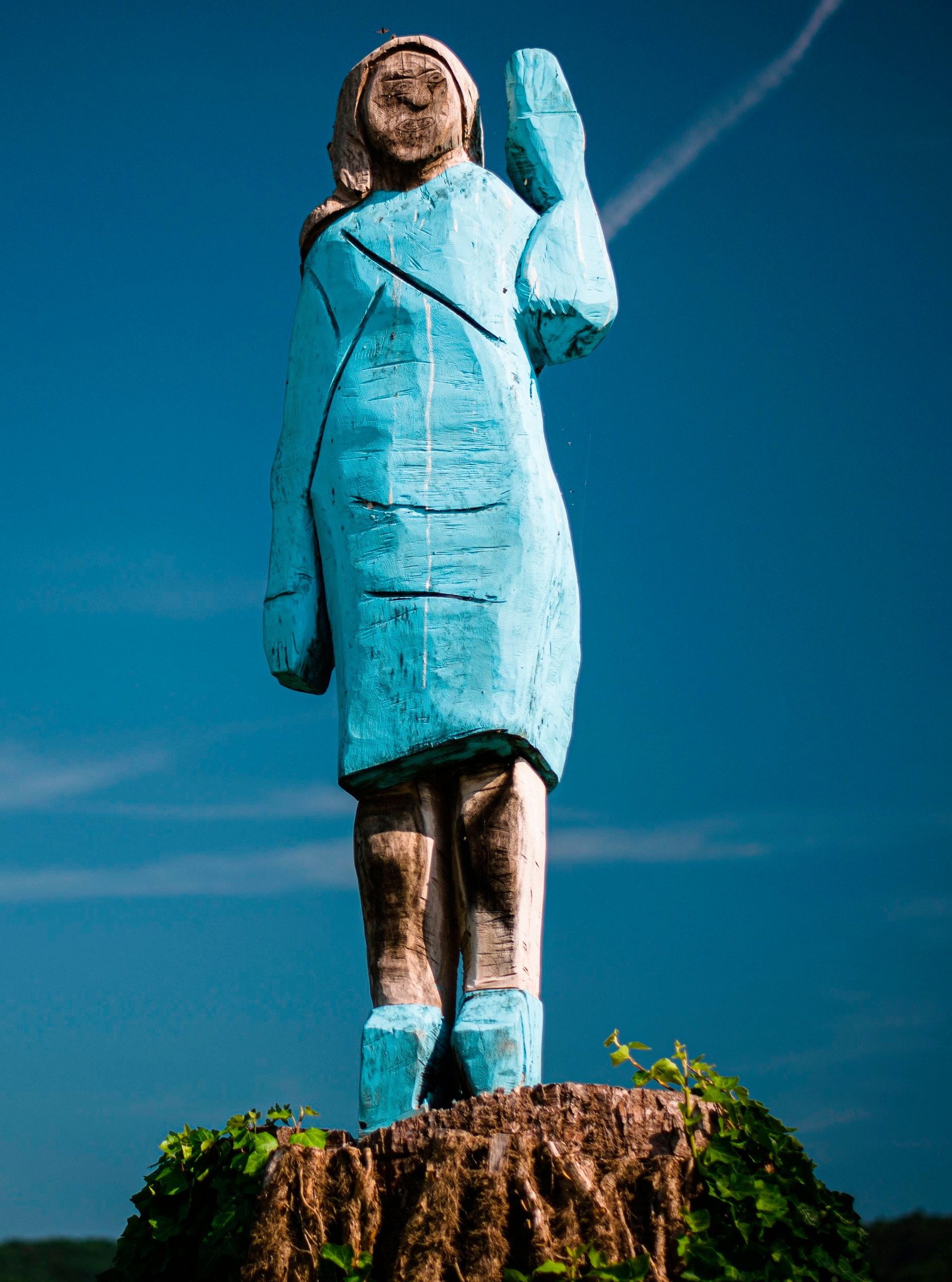 The chainsaw wood carving featured a blue wraparound coat like the one Melania wore when her husband was sworn in as President of the United States.

But it was quite hard to tell who it was otherwise and, earlier this year, it became even more unrecognisable when vandals set it on fire on the night of July 4.

A widely mocked statue of Uruguayan footballer Luis Suarez was also given some rough treatment. 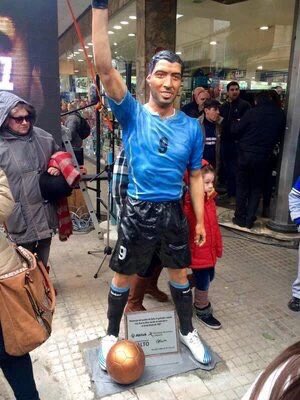 The sculpture, which was put up in Salto in Uruguay, was knocked over by a drunk man while Suarez attended Lionel Messi's wedding in 2017.

It'd previously been blasted for not looking like the footballer, with artist Alberto Morales Saravia reportedly admitting he'd based it on pictures off the internet.

There are definitely some dodgy celeb statues which you wouldn't want to vandalise – because they're worth a fortune. 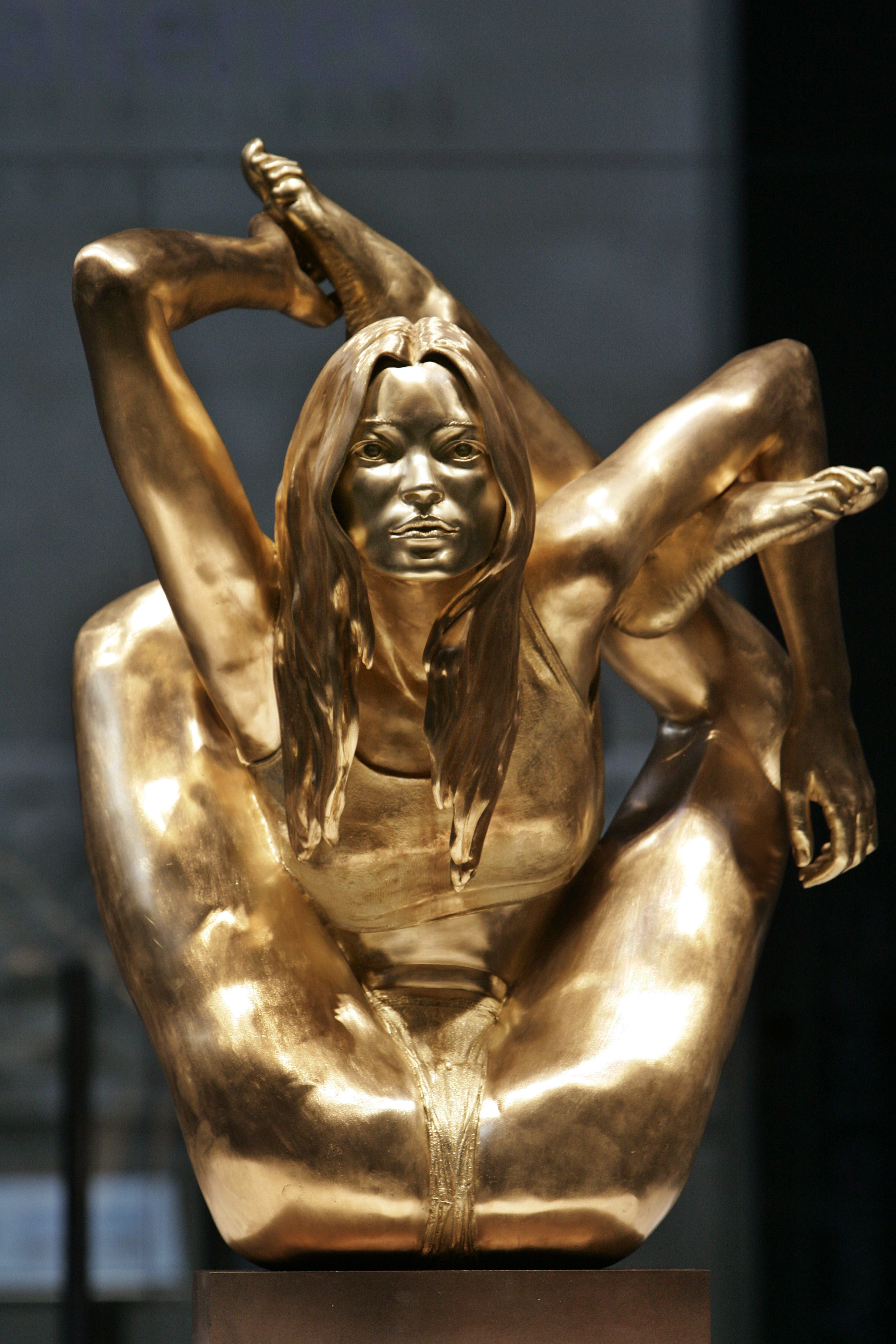 Kim Kardashian's naked, pregnant body was immortalised as a fertility statue in 2013. 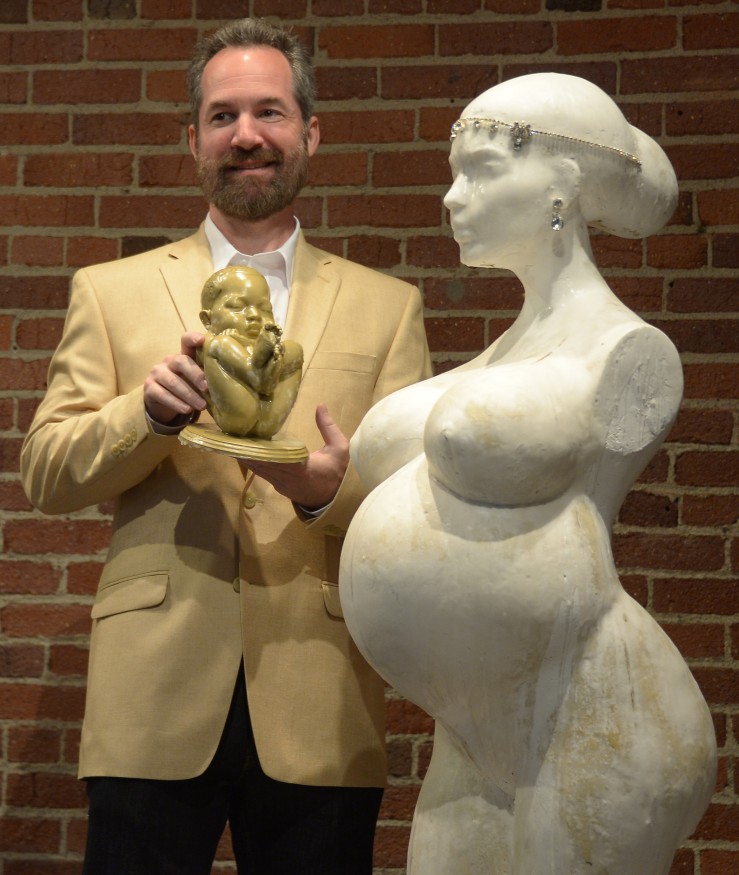 Sculptor Daniel Edwards named the work LA Fertility and visitors to the Los Angeles Lab Art gallery were encouraged to rub the sculpture's belly to help them conceive.

But not everyone was touched by the work's armless form.

Out with a bang

A statue of The Beatles in Houston, Texas, had an unfortunate incident which left the four sculptures looking less than fab. 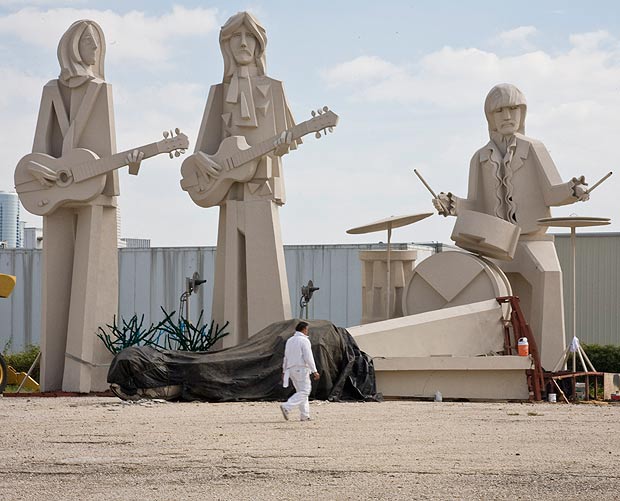 High winds from Hurricane Ike in 2008 blew the stoney recreation of Sir Paul McCartney over.

Workers covered the mangled face up with a black sheet.

To mark what would have been Nirvana frontman Kurt Cobain's 47th birthday, Aberdeen, Washington, was unveiled in the city's museum of history. 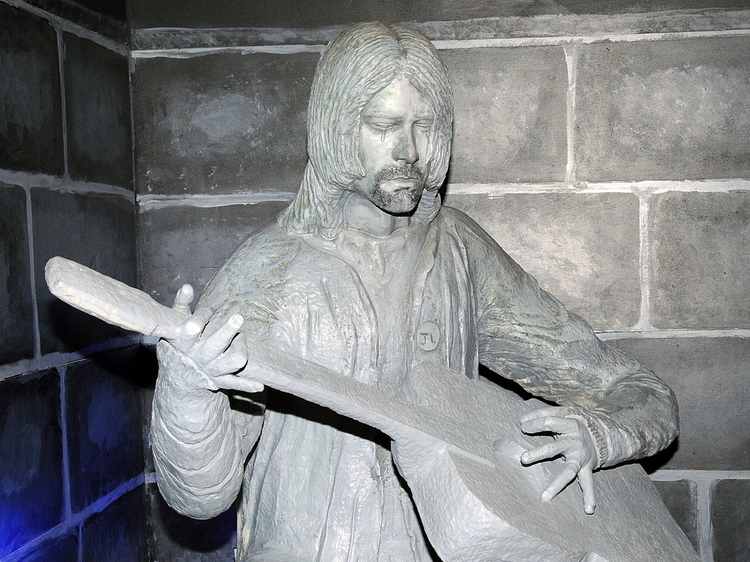 But some critics derided the cement sculpture as looking more like a crying Christ than the late rock star.

Tupac fans reacted with horror earlier this year when someone tweeted a picture of a statue of the rapper with the caption: "New Tupac statue in Dallas, what's your thoughts?" 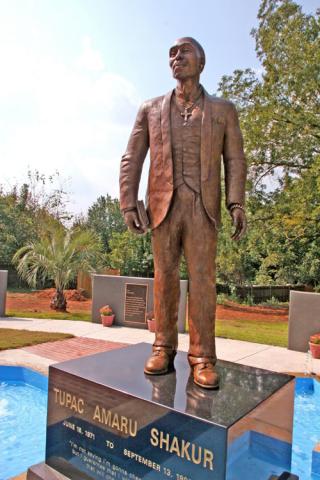 It turned out the sculpture, which was branded a "joke" by some angry Tupac aficionados, actually used to stand in Stone Mountain, Georgia and was located outside the Tupac Amaru Shakur Center for the Arts.

But it was removed after Tupac's mother sold the arts centre and a new $500,000 sculpture was commissioned in 2017. 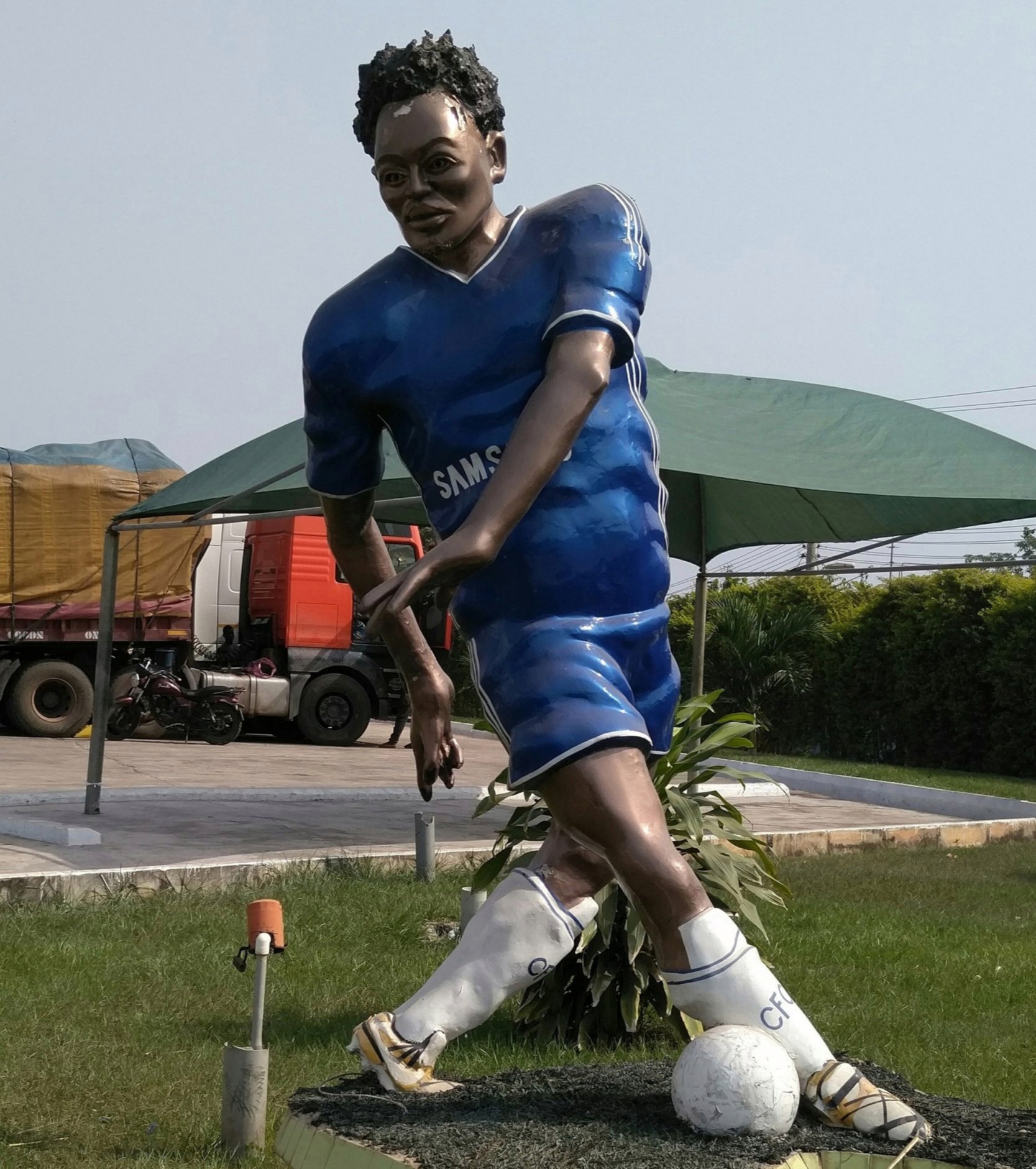 The bizarre sculpture was raised in Kumasi, Ghana, by an anonymous artist a few years earlier.

People mocked the odd position of the midfielder's body, whose legs were crossed with the ball at his feet.

Daniel Edwards, who made the Kim Kardashian sculpture, also received flak for an earlier sculpture he made of Britney Spears.

The pop idol is depicted naked kneeling on a bearskin rug as she gives birth to her son Sean Preston, with the sculpture planned to go alongside a display case of anti-abortion materials in a Brooklyn gallery. 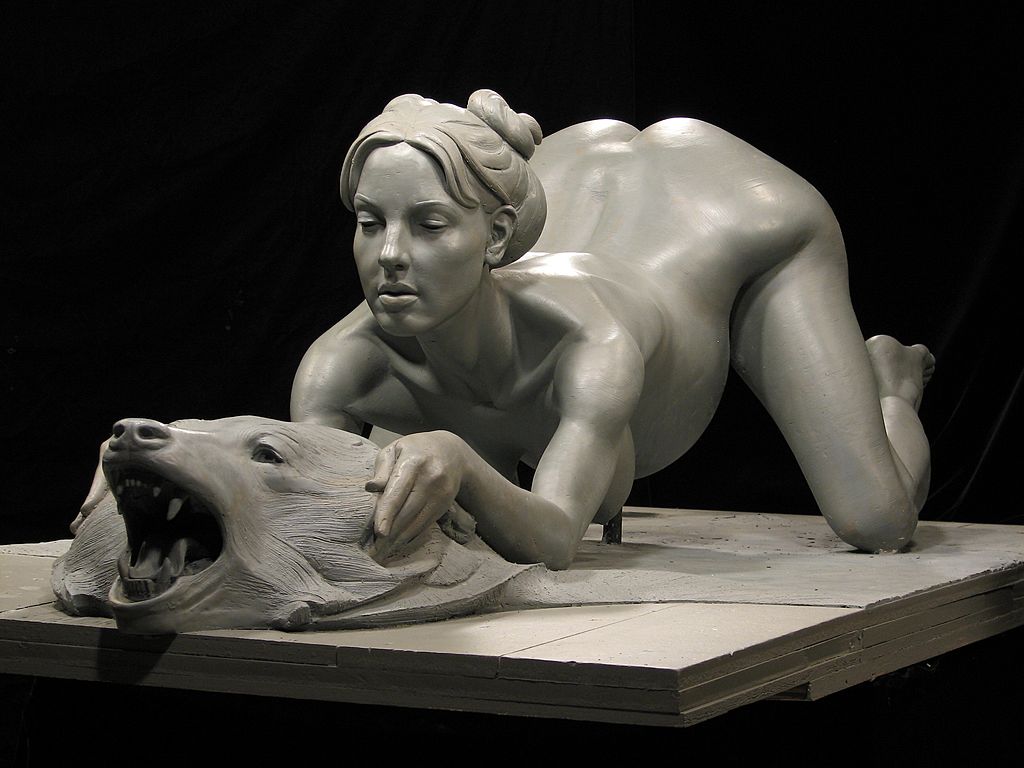 "Everyone is coming at me with anger and venom, but I depicted her as she has depicted herself – seductively," Edwards told CBS in 2006.