Home » The military is concerned about extremism in its ranks. Here's what to know

The military is concerned about extremism in its ranks. Here's what to know 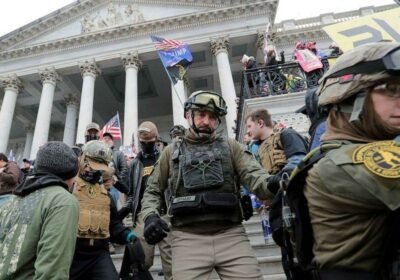 The Jan. 6 assault on the U.S. Capitol left a lasting impression on the nation’s conscience, but perhaps no more so than at the Pentagon, where it soon became clear that a number of people who allegedly participated in that day’s events had served in the military, including an Air Force veteran who died.

While an ABC News analysis determined that none of the hundreds criminally charged in the incident are active-duty service members, two are Army Reservists and one is a Virginia National Guardsman.

Is there a growing problem of extremism in the ranks? Are active-duty service members, in addition to veterans, becoming radicalized and actively espousing extremist ideologies? Are extremist groups actively recruiting former service members?

On Feb. 3, Austin ordered an unprecedented military-wide “stand down” to address those questions.

Every unit was given two months to set aside a day where service members of every rank would discuss extremism in the ranks and what to do about it.

Austin said he believed that “99.9% of our servicemen and women believe in that oath, they believe, embrace the values that we’re focused on, and they’re doing the right things,” but acknowledged that “small numbers, in this case, can have an outsized impact.”

However, the new defense secretary could only speak in generalities because the Pentagon — renowned for its record-keeping — does not have a grip on how many extremists there might actually be in the ranks.

That is in part because Defense Department policies do not prohibit service members from belonging to hate groups. Instead, members can only get in trouble once they participate in activities like fundraising, recruiting, leading or demonstrating for such groups.

The current Defense Department policy dates to a 2009 document about how to handle “dissident and protest activities among members of the Armed Forces.” It guarantees a service member’s First Amendment “right of expression” but leaves up to commanders how to balance that with conduct that if “unchecked, would destroy the effectiveness of his or her unit.”

Instead of a clear definition of extremism, the policy strictly prohibits military personnel from actively advocating “supremacist, extremist, or criminal gang doctrine, ideology, or causes, including those that advance, encourage, or advocate illegal discrimination based on race, creed, color, sex, religion, ethnicity, or national origin or those that advance, encourage, or advocate the use of force, violence, or criminal activity or otherwise advance efforts to deprive individuals of their civil rights.”

“It is extremely complicated because of their First Amendment rights,” said Martha Raddatz, ABC News’ chief global affairs correspondent. “Can they be part of a group? What do you do in your personal life versus when you’re in the military? Can you join an extremist group and be part of the military?”

A congressionally mandated Pentagon report issued in March described how domestic extremist groups can pose a threat to the military by seeking to recruit active or past service members who could “ bring legitimacy to their causes and enhance their ability to carry out attacks.”

The report could not determine if extremism in the military was a growing problem, but it provided examples of current and former service members who were affiliated with or had leadership positions in white supremacist extremist groups like Atomwaffen and the American Identity Movement.

An ABC News analysis has found that at least 52 of the more than 400 people charged in connection with the uprising are veterans (about 13%).

While that’s just a fraction of the estimated 18 million veterans in the U.S., the fact that more than 1 in 10 individuals charged had a previous military background is a “disproportionate number,” said Oren Segal, the vice president of the Anti-Defamation League’s Center on Extremism.

Segal added that finding extremists who had previously served “in institutions that are geared toward protecting all Americans” is concerning because they have “a disproportionate impact.”

Even before the assault on the Capitol, concerns had been raised about a number of incidents involving current and former members of the military affiliated with extremist groups.

In October, two former Marines were among the dozen militiamen arrested by the FBI and charged with participating in a plot to kidnap Gov. Gretchen Whitmer.

In May, three former service members were arrested for allegedly plotting to incite a violent attack against a Black Lives Matter protest in Las Vegas. Federal prosecutors have alleged that two of the men had ties to the Boogaloo movement, which espouses an anti-government ideology and wants to incite a civil war.

The shooting deaths of two law enforcement officers in California in late May and early June involved an active-duty Air Force sergeant who is alleged in a federal criminal complaint to have ties to the Boogaloos.

In that instance, on May 29, 2020, Sgt. Steven Carrillo and another man allegedly shot and killed a federal protective security officer outside the federal courthouse in Oakland in a drive-by shooting.

A week later, he allegedly ambushed and killed a Santa Cruz County Sheriff’s deputy and wounded two other law enforcement officers before being captured.

The criminal complaint disclosed how investigators found a patch on a bulletproof vest worn by Carrillo that contained symbols associated with the boogaloos. During the shootout with Santa Cruz deputies, he allegedly used his own blood to write “boog” and other phrases on the hood of his car that investigators say are associated with the boogaloos.

Carrillo has pleaded not guilty to multiple federal and local charges of murder and attempted murder.

“People have been talking about the concern about white supremacists and militias in the military for a long time,” said Naveed Shah, an Army veteran who is the government affairs coordinator for the military advocacy organization Common Defense.

“Extremist groups target veterans and military members, because they want that training that they have,” said Shah.

A stand down to study and root out extremism

As the stand-down order went into effect at bases nationwide, discussion leaders were realistic about what they hoped to achieve. Pentagon officials acknowledge that future changes may not identify every individual who espouses extremist beliefs, but they want to make sure military leaders are better prepared to identify warning signs in the future.

“My goal today is at least to start the conversation, to have our junior officers think about these issues,” said Marine Maj. Susan Upward, who led a recent discussion at the Marine base in Quantico, Virginia. “Think about how their ideology or their personal beliefs work within the system that we’re in.”

But Pentagon officials also acknowledge that the stand-down discussions have provided good feedback from leaders about how they can identify extremism in their units and what they should do about it.

“All of them are clamoring for some better, more specific guidance about What is extremism? What is extremist ideology? What should we be looking for?” said Pentagon press secretary John Kirby.

“We’re not trying to be the thought police or the belief police,” said Kirby. “This is about the kinds of conduct and behavior that certain extremist ideology can inspire, and encourage and embolden inside the ranks.”

The discussions have already resulted in some immediate changes, including the commissioning of a study to better understand the scope of the issue and standardizing the screening process for recruits, including the vetting of social media accounts which is currently limited by regulations.

Military service members transitioning to civilian life will also be warned that they might be approached by extremist groups.

Kristofer Goldsmith, an Army veteran and the founder of High Grounds Veterans Advocacy, said veterans are, in some cases, led down a bad path.