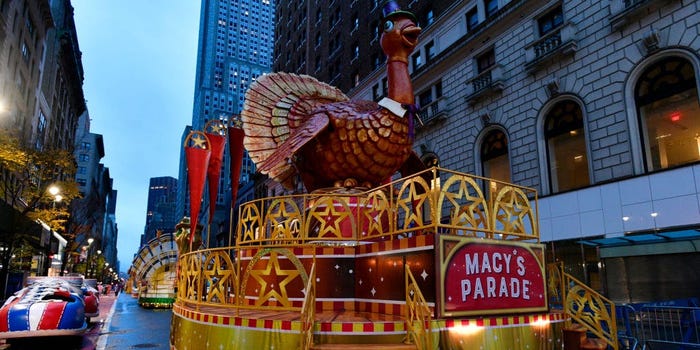 The rituals honored the Wampanoag and Lenape people and took place in the Lenape territory of Manahatta, where the parade is held each year, according to a press release from Indigenous Direction, a firm that consults on indigenous cultural representations.

The blessing was aired in Wampanoag, but translates in English to: "Creator and Ancestors, we honor you for all things. We honor the Lenape people of Manahatta. We honor all our relations because, long ago, we were here. Now we are here and we will always be here. And so it is."

Macy's tweeted a photo of a tribal member offering the blessing.

The Wampanoag, also known as The People of the First Light, have inhabited Massachusetts' Eastern coast for more than 12,000 years, the press release said.

"In the centuries following first contact with colonizing settlers, forced assimilation silenced the Wampanoag language for over 150 years," the group said in the release, echoing facts read by host Hoda Kotb during the parade broadcast.

"However, through historical written documents by Wampanoag people, language and culture are again thriving today on this Indigenous land."

This year's Macy's parade looked like none of those held in previous years due to the coronavirus pandemic. As Insider's Michelle Mark reported, Macy's said it had reimagined the television-only event "to safely keep spectators in New York City at home and families nationwide glued to their televisions."

What Thanksgiving dinner looks like in different parts of the country

I made Ina Garten's easy turkey breast recipe, and it's great for a last-minute Thanksgiving dinner