Home » The disappearing bank branches and the communities left behind 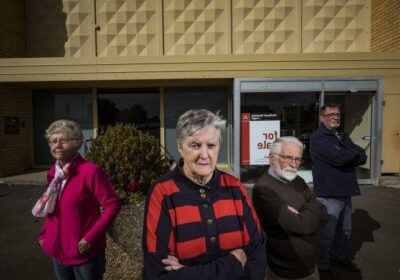 Australian banks have shut or earmarked the closure of almost 300 branches since the pandemic accelerated consumers’ switch to online banking.

Many branches that initially had temporarily closed during the height of the pandemic will never reopen and some communities have been left with no local bank. 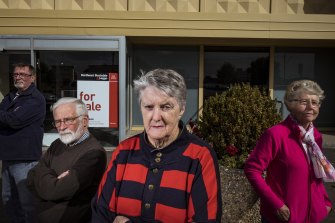 Mortlake residents Doug Parker, Kelvin Goodall, Jill Parker and Rosalie Goddard are upset at the closure of their only bank leaving them with an over 40-kilometre journey to the nearest town with an ATM.Credit:Chris Hopkins

Since the start of last year, banks have informed the Finance Sector Union of 298 branch closures, with Victoria and NSW the hardest hit, each recording 97 closures.

The ANZ has closed or earmarked the closure of the most branches, 131, followed by Westpac, 53, the NAB, 45, and the Commonwealth Bank, 32.

The union’s Nicole McPherson accused banks of abandoning customers, communities and staff who had supported them during the pandemic.

“It seems they used the cover of the pandemic to test out whether the community would cop these closures permanently,” she said, referring to the one in 10 branches that the big four banks temporarily shut during 2020.

She said while banks used customers’ move to online banking as their rationale for closing branches, they had created this behaviour.

“They get customers to bank online,” she said.

The recent mass closure of branches has left some communities, such as Mortlake in western Victoria, with no bank.

Last month, the small community of 1300 residents lost its ANZ branch and the nearest bank is now a 40-kilometre drive away in Camperdown.

“It’s inconvenient,” said Jill Parker, a Mortlake resident who has been an ANZ customer for 50 years. There is no ATM in the town and while some residents can withdraw and deposit money at the post office, this is not an option for ANZ customers.

Mortlake residents Doug Parker, Kelvin Goodall, Jill Parker and Rosalie Goddard are upset at the closure of their only bank.Credit:Chris Hopkins

“If we want cash we have to drive for half an hour and that’s if you have a car,” said Ms Parker. “There are still times when you need cash and a lot of people, particularly older people, are not used to using bank cards.”

A group of aggrieved locals have been campaigning for the Bendigo Bank to open a local branch but have not had any success.

National Seniors Australia chief advocate Ian Henschke said more than 2.5 million Australians did not have the internet, and banks had a social responsibility to provide branch services.

He likened the closure of branches to a “form of institutionalised elder abuse”.

“There is a general level of anxiety and frustration, not just with banks, but with all institutions that expect people to be online,” he said.

“They expect older Australians to go out and buy a smartphone when the money they spend is just extra revenue for the bank.”

While the number of bank branches in Australia has been declining in recent years as more customers adopt online banking, the pandemic has accelerated the trend.

The ANZ’s managing director of retail, Katherine Bray, said the bulk of its branch closures had been in major cities where other banking services were within a few kilometres.

She said customers were no longer using branches like they used to, with in-branch transactions plummeting by 50 per cent over the past four years.

“In recent years we have seen a significant shift in customers preferring digital options to do everything from ordering food and getting school newsletters to doing their banking, which is convenient and secure.”

She said staff had phoned more than 65,000 elderly and vulnerable customers since July to help them navigate the ANZ app, use other banks’ ATMs and complete other online tasks.

She said that even before the pandemic, around two-thirds of their customers were using digital channels for their everyday banking needs, like transferring funds, making payments and checking account balances, with just six per cent of customers visiting branches for these tasks.

NAB retail executive Krissie Jones said more than 93 per cent of customer interactions were now taking place over the phone, by video or online.

“Over the past several years, fewer customers are coming into branches and foot traffic has lessened dramatically. Over the last year alone, we have seen a further 30 per cent reduction in over-the-counter and basic servicing transactions in our branches.”

A Westpac spokeswoman said there had been a seismic shift toward digital and cashless banking and declining foot traffic in branches, particularly in urban and metropolitan areas. “To meet this changing customer demand, Westpac has grown its 24/7 phone banking and virtual banking centres,” she said, pointing out that 300 new jobs would be moved to Victoria.

It is not just the big four banks that are closing branches, with Korumburra locals recently launching a campaign to save their local Bendigo Bank.