Home » World News » The Brexit divorce deal: what’s in it?

The Brexit divorce deal: what’s in it? After almost two years of negotiation, the UK and EU have agreed to a draft “withdrawal agreement” – subject to approval by the UK and EU parliaments.

Here is what it says, in outline: 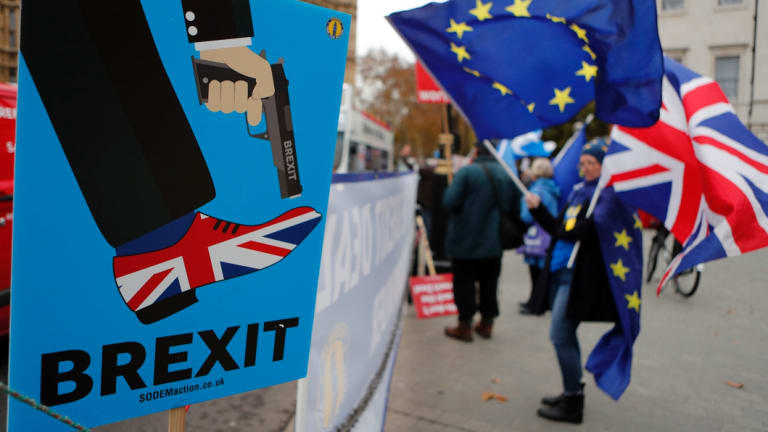 At that point the UK will enter into a "transition period", lasting until December 31, 2020, intended to smooth the path to a new customs and trade relationship (which is yet to be negotiated).

During the transition period, the UK will stay in Europe’s Single Market and Customs Union, and must follow all EU rules, but will lose its vote on changes to those rules.

The UK will be free to start making free trade deals with other countries, in anticipation of full Brexit – though those deals can't come into effect if they're incompatible with the SM and CU.

The transition period can be extended, by one or two years, if the UK and EU agree to before July 1, 2020 – in case the negotiation of a trade deal takes longer than hoped.

The Good Friday Agreement that brought peace to Ireland in the 1990s was predicated on an open, free border between Northern Ireland and the Republic. Thousands travel and trade across it every day without hindrance or customs checks. 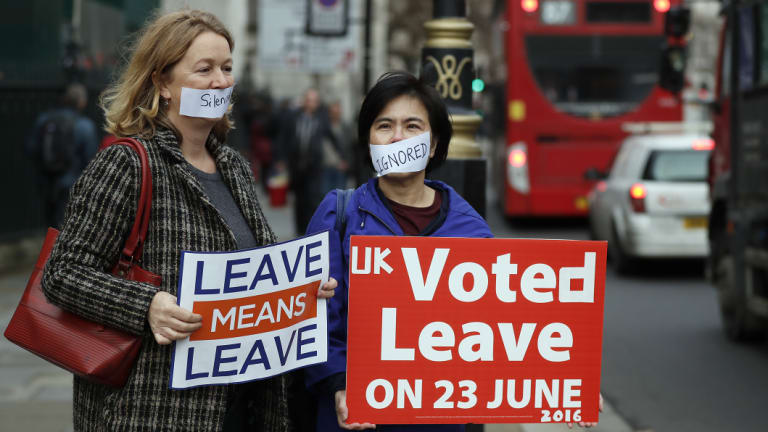 Pro-Brexit demonstrators outside the Houses of Parliament in London.Credit:AP

Both the EU and UK agreed this must continue. The crux of the debate – and Brexit’s biggest sticking point – has been how this can be done while still ensuring each side’s other Brexit 'red lines' are not crossed.

The backstop will kick in if the EU-UK future relationship is not settled and in effect by the time the transition period ends.

It will keep Britain effectively inside a customs union with the EU, preventing it from setting its own trade policy.

And it will keep Northern Ireland inside the EU’s own customs union and aligned with single market rules.

In effect this will put a trade border between Northern Ireland and Britain.

Neither side can end the backstop unilaterally.

However a new trade deal is not the only way out. The two sides could also find some third solution, such as using new technology to keep the border open while still enforcing trade law.

The government’s own legal advice warns that this backstop may last indefinitely should trade talks stall. This is why it is a sticking point for Brexiters, who say the UK could be stuck in a Brexit limbo, paying money to the EU and losing a say over its own laws while gaining nothing that Brexit was promised to deliver.

Prime Minister Theresa May has responded that neither the UK nor the EU wish the backstop to ever come into effect, and both are obliged to use their best efforts to complete a trade deal so that it doesn’t.

Free movement will end when the transition ends. That means EU citizens will no longer have the right to live and work in the UK without a visa (those already in the UK are a special case), and vice versa.

The UK is yet to outline the migration policy that will replace free movement, but it says it will be skills-based and EU citizens will no longer be allowed to "jump the queue" ahead of migrants from other countries.

However some issues (such as the recognition of professional qualifications) for such people can only be finally settled in the "future relationship" deal that will be negotiated after Brexit.

The EU and UK have agreed on calculations for the “divorce bill” – how much the UK owes on commitments it has made to the EU and is legally obliged to pay.

No actual figure is given, because it’s complicated, but it will be at least £39 billion ($68 billion) and paid over several years rather than in one go.

This was a big issue for Brexiters, and the UK will withdraw from European fishing policy. However it intends to sign a new agreement on mutual access to each other’s waters.

The UK will no longer be under the jurisdiction of the European Court of Justice – after the transition is over – but the ECJ will still have significant indirect influence on interpretation of EU law that is applicable in the UK.

The deal is accompanied by a “political declaration” outlining (non-binding) ambitions for the future UK/EU relationship.

It’s not binding but anticipates a trading relationship on goods that is “as close as possible”, with “ambitious customs arrangements”. However the UK will be able to strike its own trade deals with other countries.

There is also a lot on future security co-operation.