Thailand’s prime minister has ended a state of emergency in Bangkok as he tries to ease tensions with tens of thousands of protesters calling on him to resign.

Prayut Chan-o-cha, a remnant of the military junta that ruled Thailand between 2014 and 2019, said the move was intended as the first step towards ‘de-escalation’ after activists ‘made their voices heard’.

He called on activists to ‘turn down the volume on hateful and divisive talk’ and work through parliament to bring about change. 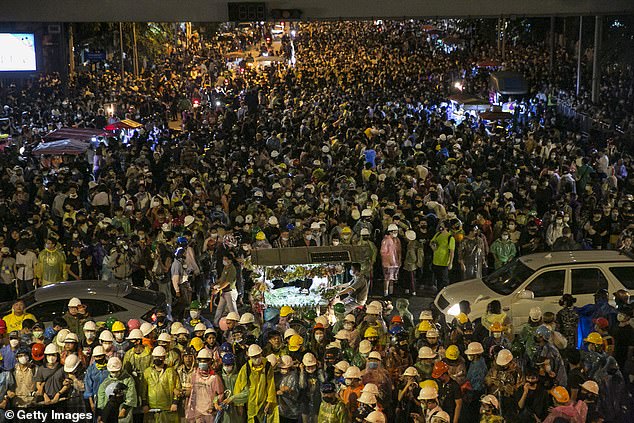 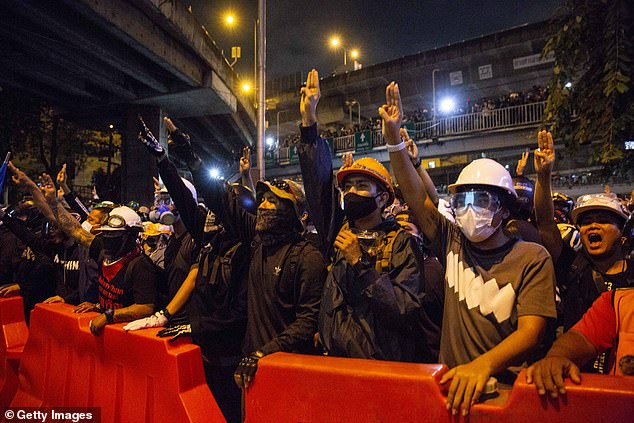 The Prime Minister declared a state of emergency in Bangkok a week ago, giving police powers to break up gatherings – though it did not stop activists (pictured Wednesday) 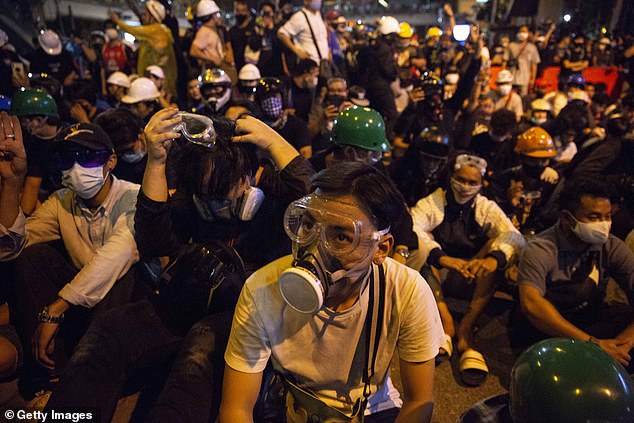 Thailand’s Prime Minister has now revoked the emergency order in an attempt to de-escalate tensions, but protesters have vowed to come back in three days if he does not quit 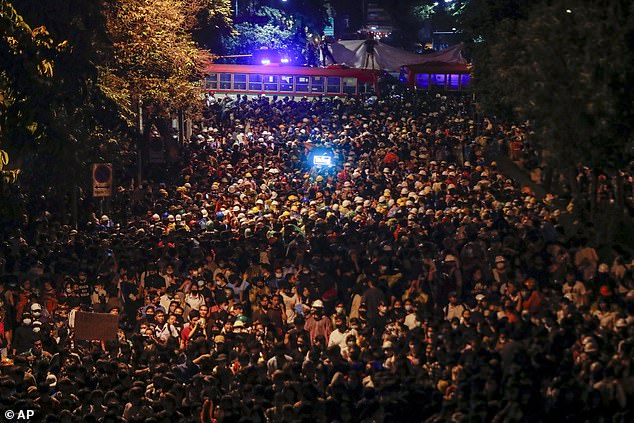 Demonstrators, who had been gathered outside Prayut’s office in Government House, warned that he has three days to resign or else they will return.

The state of emergency had banned gatherings of more than four people, giving police licence to drive protesters off the streets.

It also allowed for censorship of the media, to prevent news of the demonstrations from spreading.

Prayut said the situation had now calmed to the extent that the laws were no longer necessary, and could be handled using existing legislation.

However, the move will be widely seen as a victory for the demonstrators, who have not significantly changed their tactics in recent days.

As he was speaking, protesters marched near Government House, pushing through lines of police, though there was no widespread violence.

Activists also demanded the release of fellow marchers who have been detained. 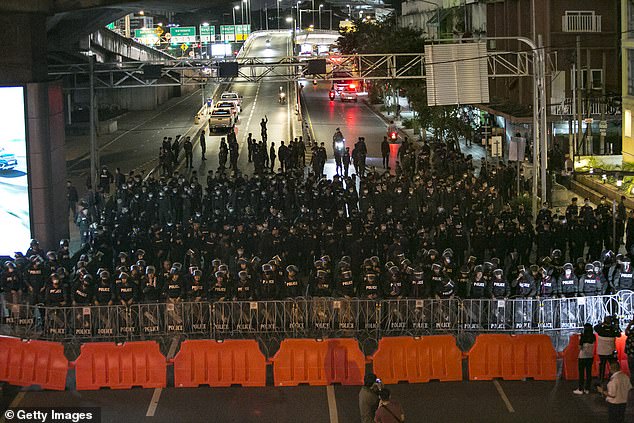 Police were given emergency powers to break up protests, but the sheer numbers of people have left them unable to clear the streets 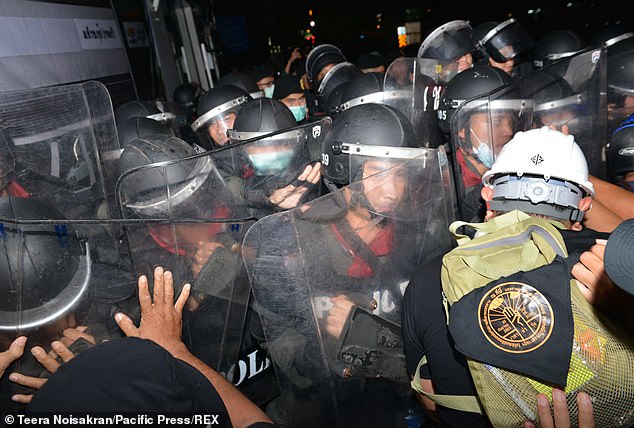 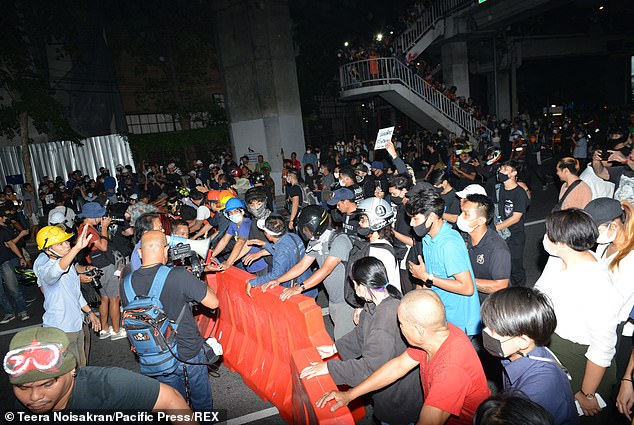 The Prime Minister has urged demonstrators to refrain from acts of violence and engage through parliament to make their voices heard (pictured, activists break police lines) 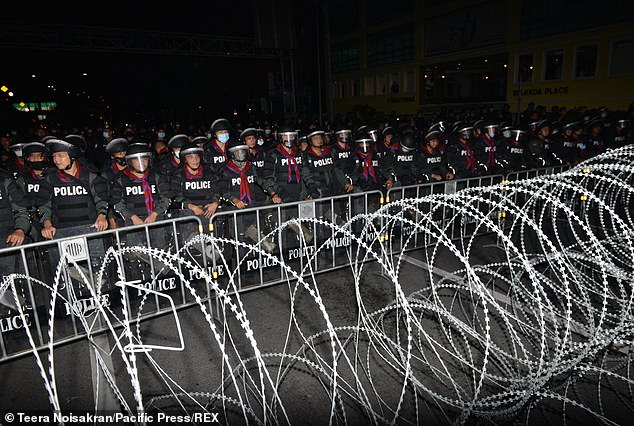 Thai police say 77 people have been arrested, but human rights lawyers put the number at 87, with 81 having been prosecuted.

The most serious charges were brought against two activists who obstructed the royal motorcade last week.

They have been charged with threatening violence against the queen, and face possible life terms.

Tens of thousands of activists have been taking to the streets of Bangkok for months, led by student groups demanding reform of the country.

Among their demands are Prayut’s resignation, reform of the monarchy, a new constitution and an end to the harassment of government critics.

The latest march began on October 14, timed to coincide with the anniversary of a 1973 student uprising the toppled a military dictatorship. 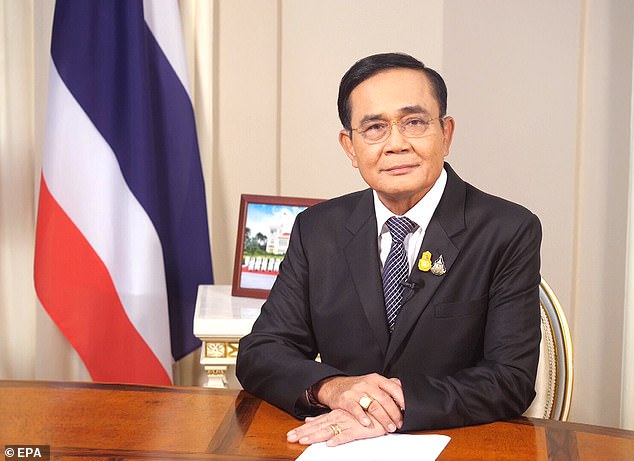 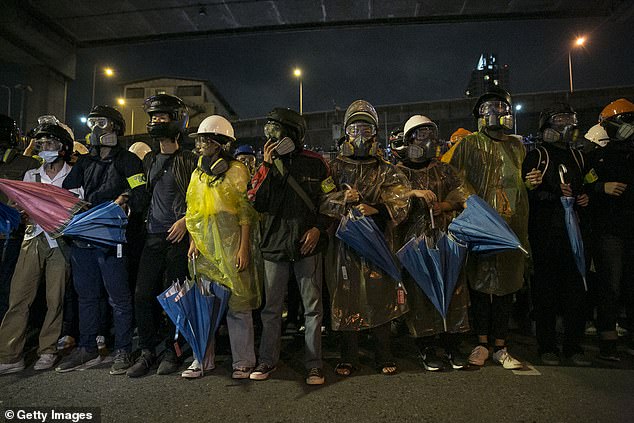 Sporadic protesters have been ongoing for months, but activists have been continually on the streets for eight days, demanding constitutional changes 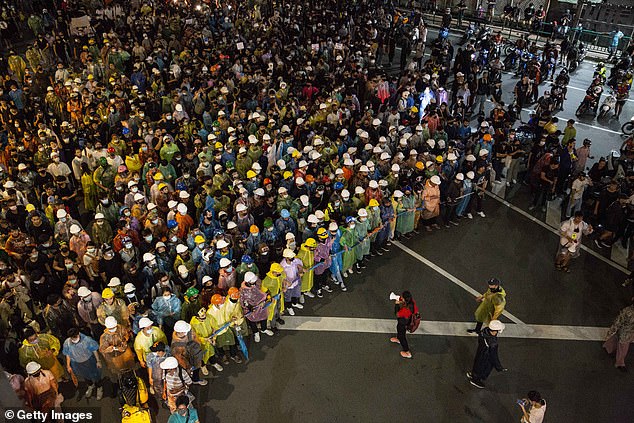 Pro-democracy protesters, wearing hard-hats and masks to protect themselves against projectiles and tear gas, gather before marching towards Government House

Demonstrators have been on the streets ever since, in what is one of the largest demonstrations in Thailand in recent times.

Support for the demonstrators has spread beyond universities into the wider population, but a particular point of contention is reform of the monarchy.

Those who oppose the demonstrators accuse them of being anti-royalist, a charge which they deny.

Thailand’s monarchy has long been viewed as a sacrosanct part of national identity.

The monarchy protected by strict lese majeste laws which carry a punishment of up to 15 years for anyone insulting the monarchs, either living or dead.

On Wednesday, royalists held rallies in several cities, in many cases led by local civil servants, in what they said was defence of the monarchy.

At a small rally in Bangkok, there were fights between anti-government protesters and palace supporters.