Texas AG staffer resigns over orders to film at border without security: report 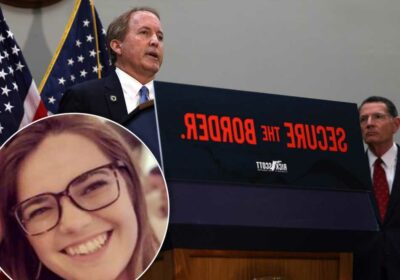 The press secretary for Texas Attorney General Ken Paxton resigned after her security concerns over a trip to the US-Mexico border were allegedly rebuffed, according to a report.

Kayleigh Lovvorn-Date, who was hired in 2016, claimed she was asked in May to film interviews of property owners in Bracketville without security or protection — unlike the bullet-resistant vests worn by Paxton during a portion of the video series, the Houston Chronicle reported Thursday.

Lovvorn-Date said Paxton and First Assistant Attorney General Brent Webster wore the protective vests during the informational videos promoting the office’s work on immigration and related issues, but she didn’t get the same offer.

Lovvorn-Date, who did not return a request seeking comment Friday by The Post, and others with security concerns were instead told by supervisors to “just bring our guns” if they felt unsafe, but the woman said she doesn’t have handgun training or a license.

The press secretary’s managers then denied a request to delay the video shoot for a week so she could iron out a security plan, according to the report.

Lovvorn-Date’s private Instagram profile identified her as a “press sec” as of Friday, but she put in her notice of resignation on May 26, citing “prioritization of my mental health and overall wellbeing,” the Chronicle reported. Her final day working for Paxton was June 11.

She was earning $65,000 at the time, some five years after her June 2016 hire date, according to a salary database cited by the Texas Tribune.

Paxton’s communications director, meanwhile, told the Chronicle in a statement that the state’s chief legal officer takes the “safety of all Texans” seriously.

“Law enforcement prepares security plans for all border trips,” spokesman Alejandro Garcia said. “We do not release those plans to employees or the public as that could be a security risk for all individuals involved in those trips.”

Lovvorn-Date said in her formal complaint that Bracketville homeowners in Kinney County along the Mexico border saw cartel activity on a daily basis, including car chases and hijackings.

One property owner at a location where the crew was “expected to visit and film” reported 60 gunshots were fired at themselves or their employees, according to the report.

Lovvorn-Date got the assignment in mid-May and quickly raised her concerns, the Chronicle reported, leading other communications staffers to agree with her.

But Webster reportedly denied her request through Garcia, claiming “security was not necessary because he did not experience a need for security” during his visit to the Rio Grande Valley.

Webster was provided with Paxton’s security detail with state troopers and other law enforcement personnel during his trip, however, and had a bullet-resistant vest on one occasion, Lovvorn-Date claimed.

“We were told that because Mr. Webster expressed willingness to travel to the properties and film interviews himself, our refusal to travel to these potentially dangerous locations without security on a tight timeline was ‘embarrassing,” Lovvorn-Date wrote.

Webster was not made available for an interview Thursday. The AG’s office is now reviewing its safety protocols and procedures following a June 10 phone call with Lovvorn-Date, the Chronicle reported.