Terminally ill groom with weeks to live marries his sweetheart A terminally ill man married his sweetheart in hospital after being told he only has weeks to live.

Darren, a cystic fibrosis sufferer took his vows with sweetheart Lauren Pope, who suffers from the same condition, as the 60 guests at the ceremony at Harefield Hospital, London wept tears of joy. 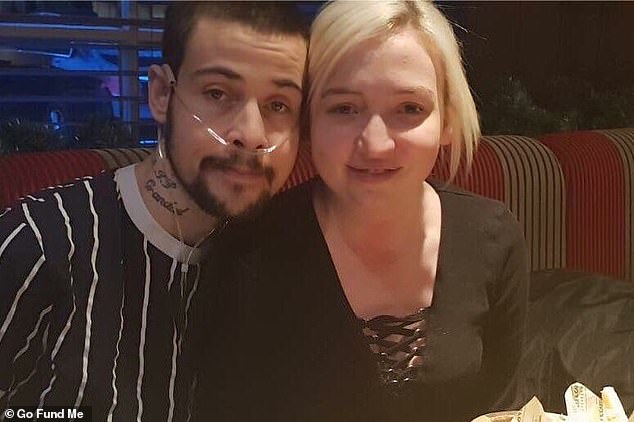 The couple were determined to seal the romance which began when they met at the funeral of a fellow cystic fibrosis sufferer in 2015.

The couple exchanged their vows before family, friends and medical staff.

Afterwards a frail Darren, 24, told the Mirror: ‘When I knew I was going to die, we were going to do all we could to get married. More than anything I want Lauren to be happy – and to know even after I’m gone, I’ll always be with her.’

And hairdresser Lauren, also 24, said: ‘I know the vows say till death do us part, but it’s not for us. Our love goes beyond that and will last long after both of us have gone.’

Family friend Antoinette Holden, 46, helped the couple’s dream become a reality when she crowdfunded £3,000 in just 14 days to pay for the ceremony.

They had planned to tie the knot once they had saved enough money but when Darren’s lungs failed on November 27 due to an infection he was told by doctors he had weeks to live.

He was helped into his suit by best man Wayne Holmes, 27, who had stayed the night in his hospital room on a camp bed. 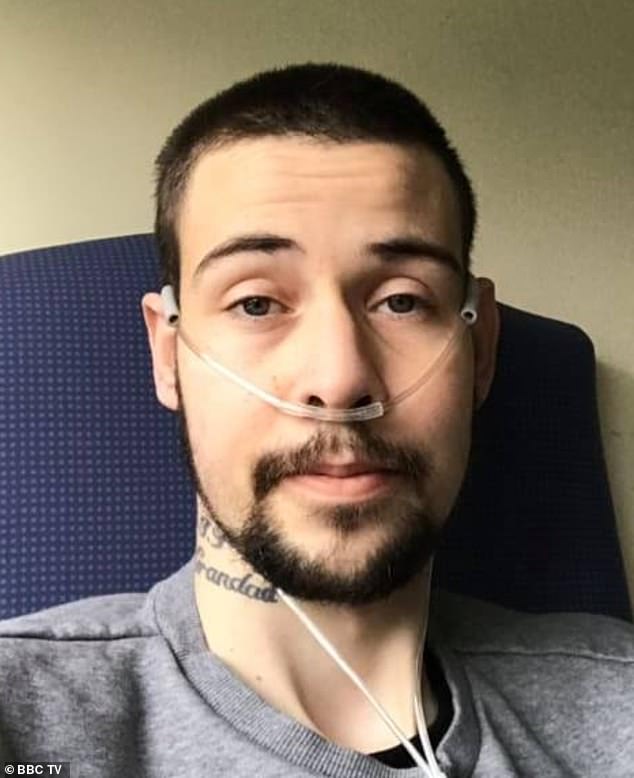 Darren, 24, wanted to make sure Lauren knew he would always be with her 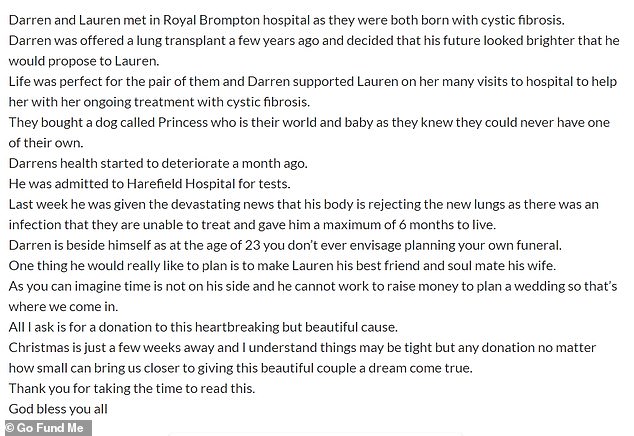 Family friend Antoinette Holden, 46, helped the couple’s dream become a reality when she crowdfunded £3,000 in just 14 days to pay for the tragic couple’s ceremony. Her post on Go Fund Me is pictured

Although mechanic Darren had to rest between the ceremony and the reception, he mustered enough strength to stand up from his wheelchair to have the first dance with Lauren to Lukas Graham’s Love Someone.

The pair were diagnosed at birth with cystic fibrosis and their life expectancy was not expected to be longer than 40-years-old.

When they were introduced in March 2015 at the funeral of a mutual friend and sufferer Ben Fidelia they realised how much they had in common.

They met at hospital a few weeks later and they soon bonded after staying in neighboring rooms.

Their closeness worried nurses, as cystic fibrosis patients are not meant to mix because of cross-infection risks.

Lauren said the nurses used to ‘tell them off’.

She explained that the nurses let them stay together after they sang ‘we shall not be moved’ and were even spotted sneaking off to the pub together by a doctor.

In early January 2016, Darren’s condition worsened and he was put on the transplant list.

By March he was given 24 hours to live after a cardiac arrest.

But  donor lungs were found and he had an eight-hour op at the Royal Brompton.

After waking from his operation, Darren, of Fulham, moved into Lauren’s flat in Watford a month later.

He said: ‘Living together was amazing. We had an unusual relationship, though. Most couples argue over what to watch on TV. We argued about fridge space for our medicines.’ But their joy was short-lived when Darren’s health deteriorated and he was admitted to Harefield last month.’

When the couple were hit with the devastating news that Darren’s lungs were failing and they expressed their wish to wed soon, Antoinette stepped in.

Not only did Antoinette launch the crowdfunding appeal, she also organised the wedding in a week after her £1,500 GoFund,

Lauren said she feels like she owes those who donated to the appeal ‘everything.’

Acting as bridesmaids for the couple’s special day were Lauren’s sisters Anne-Marie, 32, and Abigail, 13, plus her sister-in-law Chelsea, 26.

While Darren’s parents Lisa 52, and Darren Snr were  also at the ceremony with Lauren’s mum Samantha, 49, husband Phil and dad Tony, 62.

The reception was at a nearby private home, Black Jack’s Mill, donated by the owners.

Darren said: ‘It was the greatest day ever. My only concern now is Lauren will be stable. I have put away money for her as well as a box of my things to keep. I want her to be happy.’