Teenager ‘obsessed’ with female teacher, 46, he accused of having sexual relationship with him when he was under 16 ‘concocted’ text messages to back up his claims because he was angry at her for rejecting him, court hears

A male student aged under 16 who accused his former teacher of engaging in sexual activity and communications with him ‘concocted’ text messages because he was angry at her for rejecting him, a court has heard.

Rebecca Whitehurst, 46, from Cheshire, allegedly exchanged ‘sexualised messages’ with the juvenile student, who cannot be named for legal reasons, before engaging in sexual activity when she was a teacher at his Greater Manchester school in 2019.

The defence counsel for Ms Whitehurst said the complainant’s allegations of sexual activity were false.

Mark Ford QC cross-examined the boy, who appeared as a witness via video link, at Manchester’s Minshull Street Crown Court, and accused him of creating the false allegations because he was angry at the defendant for rejecting him.

Ms Whitehurst, who is accused of two counts of sexual activity and one of sexual communications, was a teacher of the boy at the time.

During his questioning of the student, Mr Ford told the boy: ‘You were obsessed with Rebecca Whitehurst and were upset you couldn’t have a relationship with her that you wanted.’ 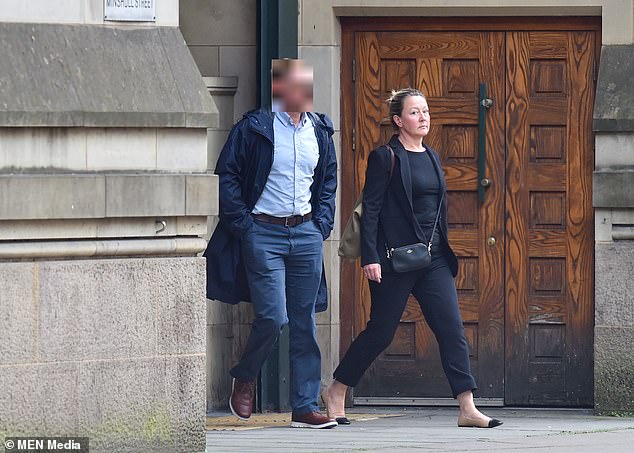 Rebecca Whitehurst, 46, is alleged to have exchanged ‘sexualised messages’ with the juvenile student, who cannot be named for legal reasons, before engaging in sexual activity when she was a teacher at his Greater Manchester school in 2019

The student told the court that his emotions were ‘maverick’ at the time and he suffered with a number of mental health issues.

Mr Ford said the boy had previously told people he got a ‘nicotine rush when thinking about killing people’, but in court he denied this was the case.

Communication between the boy and Ms Whitehurst started when she noticed him leaving a lesson ‘visibly upset’ around April 2019.

She emailed him through the school system and he was invited along to one of her ‘mindfulness sessions’ to help with his mental health.

This led to him sending his phone number to her over the email, which was unsuccessful at first, but he claims a week later when he did it again she contacted him over the phone.

He told the court that he ‘loved her’ and was ‘obsessed with her’ and that he would contact her frequently.

This included buying her a necklace which she gave back to him and she asked him to stop contacting her, Mr Ford said.

Ms Whitehurst blocked him on a number of occasions, which ‘annoyed’ the boy, but he would still try to contact her.

Mr Ford then highlighted an incident where he tried to ‘stick his tongue down her throat’ in a classroom at school and Ms Whitehurst put her hands on his shoulders as ‘she didn’t want you to do that’.

However, the boy thought this was ‘welcoming’ and not a sign of her pushing him away, the court heard.

Mr Ford added that when Ms Whitehurst would block the boy on social media he would contact her and threaten to harm himself, after which she would make contact with him, which Mr Ford suggested was ’emotional blackmail’. 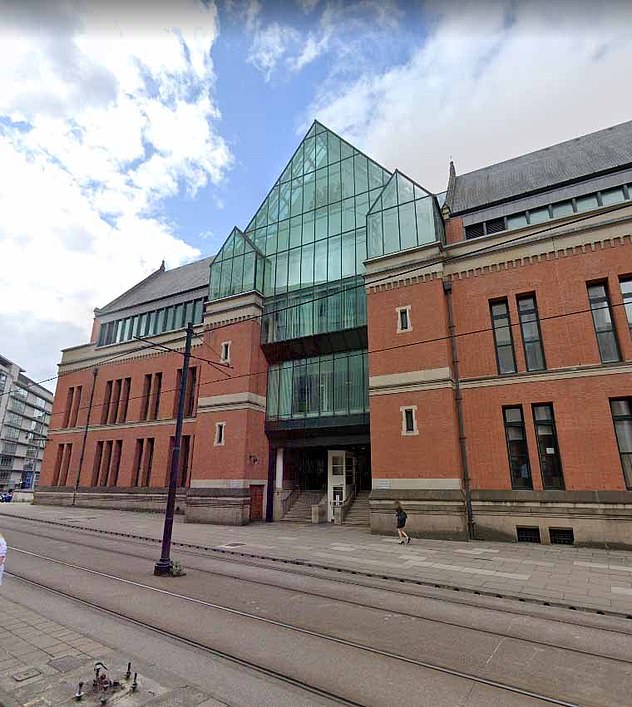 The defence counsel for Ms Whitehurst said the complainant’s allegations of sexual activity were false. Mark Ford QC cross-examined the boy, who appeared as a witness via video link, at Manchester’s Minshull Street Crown Court (pictured)

A card he sent to her was shown to the jury in which he called her ‘mum’ and he wrote: ‘I really love you and deep down I know you love me.’

Regarding text message evidence of sexual communication with him, Mr Ford told the boy: ‘I’m going to suggest that the lines attributed to Rebecca Whitehurst were never written by her and I’m going to say they were written by you.’

The boy denied both of these assertions or that he used ‘editing software’ to ‘concoct’ the texts.

Mr Ford alleged: ‘You manufactured some messages to revenge yourself because you were disappointed she didn’t want a relationship with you and you were obsessed with her.

‘You tried to exert control over her because you were obsessed with her and she was not obsessed with you… I am suggesting at some stage you have created messages to give a false impression of a relationship you wish you had with her.’

Mr Ford also accused the boy of deleting messages which were ‘inconvenient to you in your pursuit of this relationship’. The boy denied all of these allegations.

Ms Whitehurst, of Oaklands Drive in Lymm, Cheshire, is on bail as the trail continues.