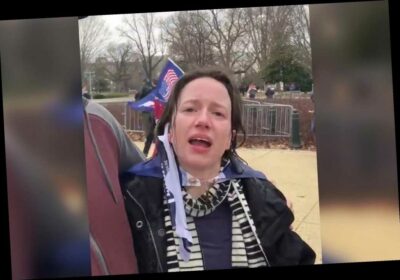 19 percent of Americans back rioters in siege of US Capitol: poll

Hope Hicks is resigning — but not because of Capitol riots

A viral video of a US Capitol protester whining that she was maced while trying to “storm the capitol” sparked outrage and mockery on social media Friday.

The protester, who called herself “Elizabeth from Knoxville”, was filmed with tears in her eyes moments after breaching the building with a violent mob Wednesday.

“I made it like a foot inside and [police] pushed me and they maced me,” she moaned to Yahoo News White House Correspondent Hunter Walker.

Asked why she wanted to get inside, she fired back, “We’re storming the Capitol — it’s a revolution!”

One reason the footage went viral was because critics accused her of holding an onion wrapped in a towel to make herself cry. And though she is holding something off white and dabbing her face with it in the clip, it is not clear that its actually an onion, according to the fact-checking site snopes.com.

The video quickly raked in thousands of views, with critics also slamming her as tone-deaf and privileged for her apparent astonishment over the police move.

“Mom, it’s Elizabeth. Can you come pick me up? This revolution isn’t fun anymore. :(((,” one Twitter user teased.

Another quipped, “‘I was minding my own business, trying to do a revolution, and these guys straight up maced me.’ Pray for Elizabeth.”

Others called for the woman, whose full name is not yet known, to be prosecuted for a crime.

And some lawmakers, including Georgia House Reps Gloria Johnson and House Rep. Tim Burchett, publicly condemned the move, according to the local station WBIR.

In an odd twist, one reason the footage went viral was because critics accused her of holding an onion wrapped in a towel to make herself cry, according to the fact-checking site snopes.com.  That accusation has not been proven.