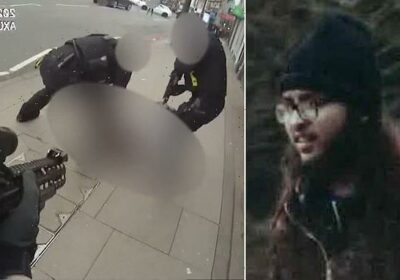 Streatham terror attack COULD have been prevented: Jury finds convicted terrorist Sudesh Amman would have been stopped from stabbing two people if he had been recalled to prison after police SAW him buying kit for his poundshop fake suicide belt

The Streatham terror attack may have been prevented had perpetrator Sudesh Amman been recalled to prison after buying items used in his fake suicide belt, jurors at an inquest concluded today.

The jury at the Royal Courts of Justice inquest into his death also concluded that the 20-year-old had been lawfully killed when he was shot dead by undercover surveillance officers in South London in February 2020.

Amman, from Queensbury, North London, had been released from HMP Belmarsh ten days earlier after serving half of a 40-month sentence for obtaining and distributing material for terrorist purposes.

He had laughed as he was sent to prison after being found with a combat knife and a jihadi flag at his home and was found to be encouraging his girlfriend to kill her parents.

In jail, he boasted of a ‘strong desire to go to the after life’ and openly shared a desire to kill the Queen, become a suicide bomber and join ISIS.

He said he wished he had been involved in the killing of Fusilier Lee Rigby, who was executed with a knife in front of Woolwich barracks in May 2013. 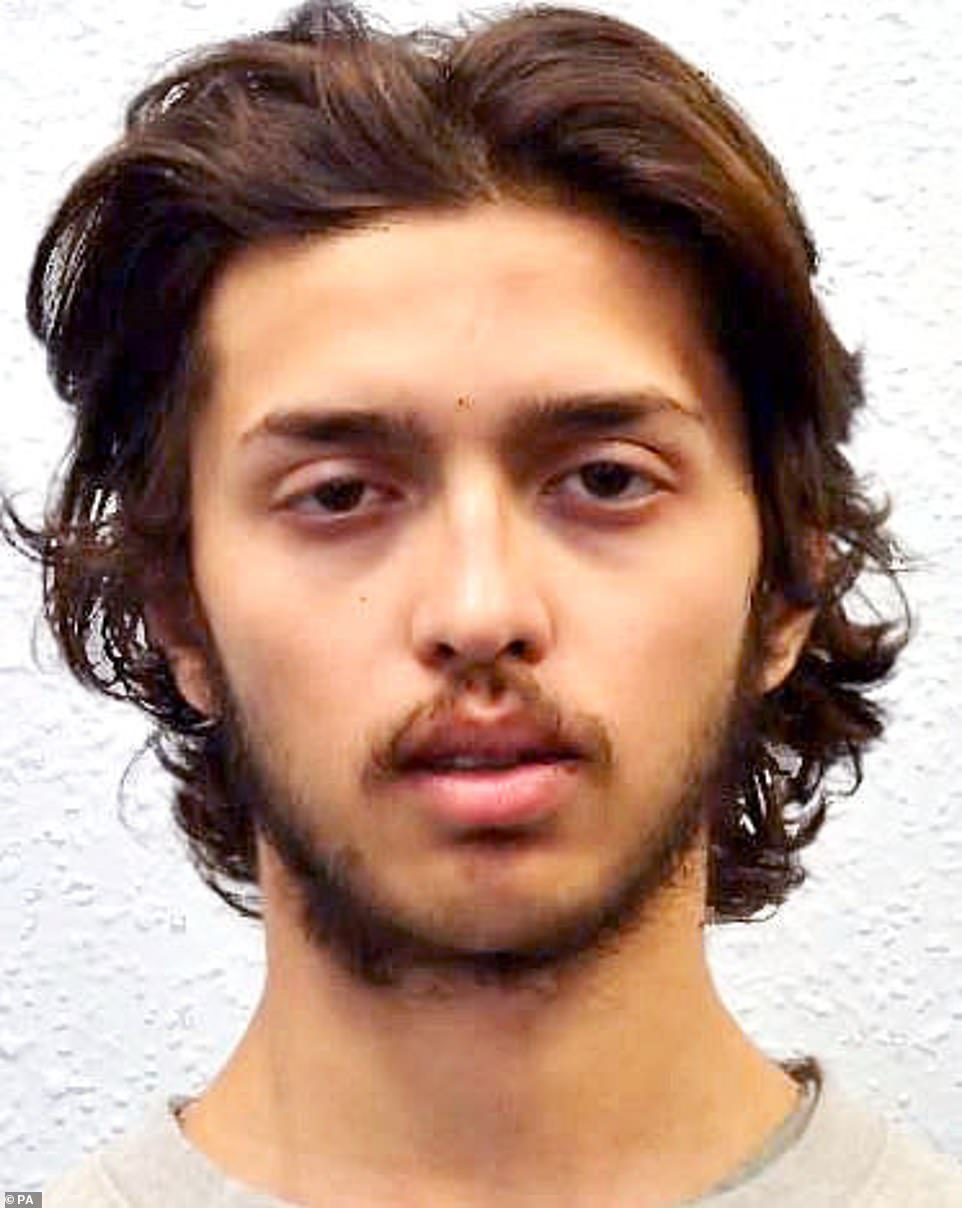 Sudesh Amman, 20, was shot dead by armed undercover officers after he stole a knife from a shop and began randomly stabbing members of the public in Streatham, South London 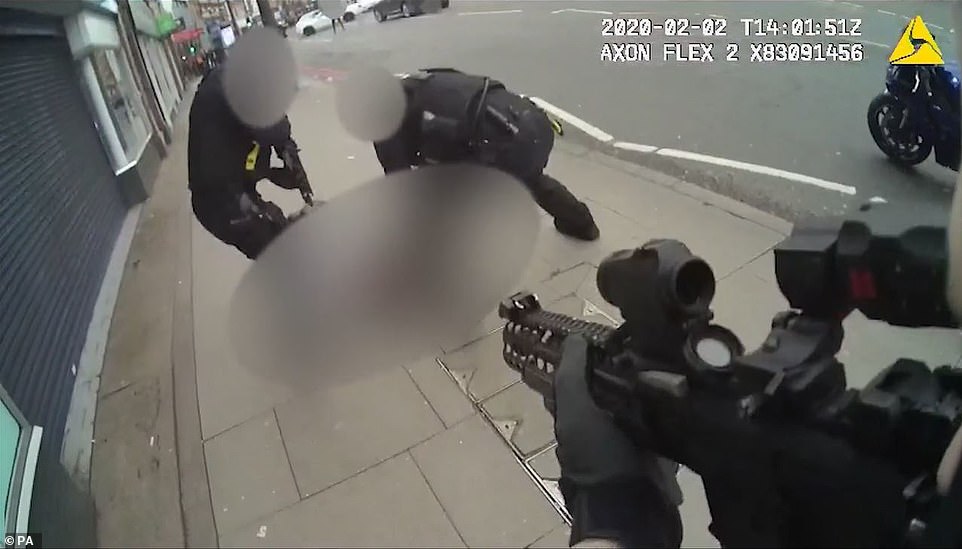 Body worn camera footage issued by the Metropolitan Police showing armed officers approaching the prone body of Amman, who had been shot, on February 2, 2020

Prison officers searched his cell just weeks before his release and found a pledge of allegiance to Abu Bakr al-Baghdadi, the leader of ISIS, written out in Arabic.

A senior officer wrote to the prison governor of Belmarsh jail, asking if he could keep Amman in jail longer, but it was not possible.

How homegrown terrorist was deemed one of Britain’s most dangerous

Sudesh Amman was described by senior police and MI5 officers as ‘one of the most dangerous individuals that we have investigated’ just two weeks before the homegrown jihadi was released from prison.

Intelligence compiled on 20-year-old Amman – both in the build-up to his conviction for collecting material useful for terrorism and disseminating terrorist publications, and in the days before his release from Belmarsh – painted a picture of a young man bent on radicalisation and committing a crime.

His inquest heard he expressed a desire to kill the Queen, and remarked his wish to have been involved in the 2013 murder of fusilier Lee Rigby outside Woolwich barracks.

He was also seemingly obsessed with his own celebrity, apparently boasting to cellmates that he was Belmarsh’s youngest terror offender.

Amman was born on December 27 1999 in Coventry, and was the oldest of six boys of Sri Lankan descent. His mother and her children moved to London in 2007, while his father moved back to his homeland.

Amman was thrown out of school several times for fighting and poor behaviour before being arrested in 2018 on suspicion of terror offences. Searches of his hard drive revealed a folder entitled ‘Chemistry’, including videos and instruction manuals concerning use of weapons.

Another instruction manual was labelled ‘How to make a bomb in the kitchen of your mum’. Amman had posted al Qaida propaganda on a family WhatsApp group, and exposed siblings as young as 11 to graphic material. He also urged his then-girlfriend to kill her parents.

Little was known about Amman’s path to radicalisation – although he was said to have been traumatised by witnessing the decapitation of human bodies during a family holiday to Sri Lanka aged 15.

While in prison, staff heard him openly showing his extreme views, which included ‘a desire to kill the Queen, become a suicide bomber and join Isis’, the inquest heard. He also described himself as ‘a wild tiger who doesn’t obey the law’.

His mother, Haleema Khan, recalled how she spoke with her son on the phone less than 30 minutes before the atrocity, as he made his way to Streatham High Road, during which he ended their conversation with ‘Bye bye, I love you mummy’.

She said she had no reason to suspect her son – who had a long history of extremism, was prone to bouts of anger, and repeatedly asked if she had said her prayers – would carry out such an attack. ‘I didn’t think he was going to do these things,’ she said.

Police and MI5 teams believed that Amman was ‘one of the most dangerous individuals’ that they had investigated and it was a question of ‘when not if’ he would launch an attack.

Nevertheless, on February 2 last year he grabbed a carving knife from a shop and stabbed two passers-by, one of them seriously, during a rampage up a busy shopping street in South London.

He was shot dead by armed surveillance officers in front of Boots on Streatham High Road, 62 seconds after the attack began, when he turned and ran at the officers.

However, the inquest heard about three opportunities in the 10 days between his release and launching his attack, which might have stopped the attack.

Mr Menon said the plan was a ‘miserable failure’ adding: ‘Two people were stabbed and [Amman] was shot and killed.’

Amman was under surveillance on January 31 when he bought bottles of Iron Bru, Bacofoil and brown parcel tape in Poundland, which they rightly believed he might use to make a fake suicide vest.

He also went into the same Low Price Store on Streatham High Road where he later grabbed the knife, and looked at a section of the shop with sharp knives before claiming he did not have any money.

MI5 and the police convened an emergency joint operations teams meeting that evening to decide what to do but decided to leave him out on the streets.

They chose not to search his room in the probation hostel in the next two days where they might have found his fake suicide vest, allowing them to arrest him and send him back to jail.

The probation service also decided that his suspicious behaviour was not enough to justify recalling him to prison for another 20 months to complete his sentence.

A third opportunity was missed when Amman, who was wearing a bulky coat, began acting oddly as he made his way towards Streatham High Road on the afternoon of February 2, walking slowly, doubling back on himself.

The inquest jury at the Royal Courts of Justice was asked to reach conclusions on whether the probation service or police could have stopped the attack taking place.

They were asked whether the probation service should have taken steps on January 31 or February 1 to have Amman recalled to prison, as a result of the purchases he had made which ‘raised serious suspicion that he was intending to make a hoax suicide belt.’

They were also asked whether the police investigation team ought to have asked to have Amman’s probation hostel room searched following the purchases.

A last question asked whether Amman should have been stopped and searched by armed police officers on February 2 between him leaving the hostel at 1.22pm and running out of the Low Price Store with a knife at 1.57pm.

Amman was not treated for his injuries because of the possible suicide vest, but he had suffered two significant gunshot injuries and they were not survivable, the jury was told.

They were directed to return a finding of lawful killing after one of the undercover officers known as BX87, broke down giving evidence, saying he thought Amman was going to kill him. 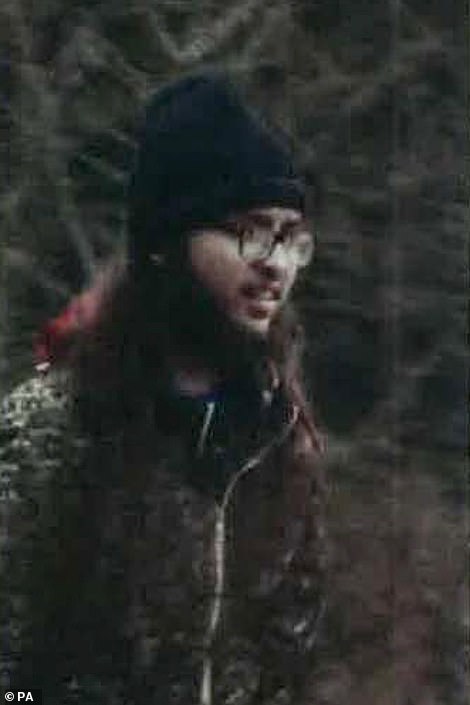 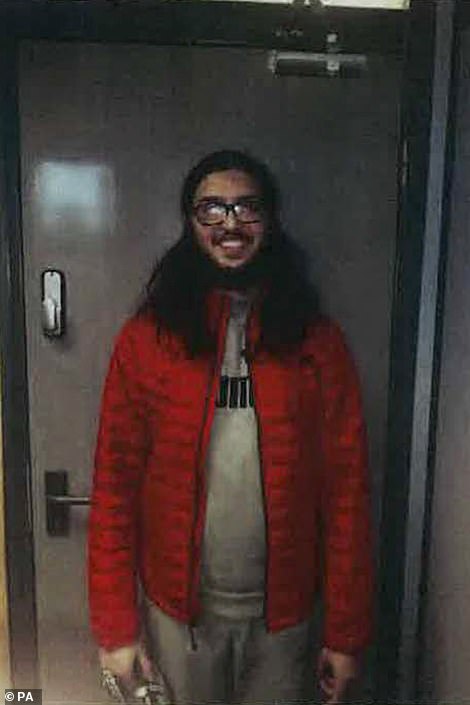 Photographs taken from a classified police intelligence report into Amman when he was under surveillance, which have both been shown to the jury in the inquest into his death

Questions are now likely to be asked about whether Amman could have been separated from more serious terrorist offenders while in prison.

He was moved into the high security unit in Belmarsh jail where he was seen ‘deep in conversation’ with Ahmed Hassan, who tried to blow up a tube train at Parson’s Green tube station in September 2017.

Other reports suggested he was mixing with terrorist prisoners including Hashem Abedi, the brother of the Manchester Arena bomber, who helped build the bomb that killed 22 people.

In a letter to his mother on July 25, two months after his arrest, Amman wrote: ‘Why do I keep smiling? I never used to smile. Wallahi [I swear] it makes me tear up when I go to jummah prayers with all the brothers.

‘It is such a beautiful experience, it’s a blessing, you don’t understand. I have never felt this amount of happiness in any mosque, hugging and salaaming [greeting] the brothers.’

The case echoes that of Usman Khan, who stabbed to death two Cambridge University graduates at a prison rehabilitation conference at Fishmongers’ Hall two months before the Streatham Attack.

Khan had failed to reform while in prison for planning to set up a terrorist training camp and had also mixed with serious offenders in jail.

He launched his attack 11 months after his release, after police failed to search his flat when suspicions were raised about his behaviour. He was also wearing a fake suicide belt and was shot dead by police.