What the cluck? Stomach-churning moment chicken swallows a snake WHOLE after spotting it on a garden patio in India

This is the stomach-churning moment a chicken swallows a snake whole after spotting it on a garden patio in India.

The clip, filmed near Kalburgi in Karnataka, captures the bird as it approaches the young reptile.

But rather than be spooked by the creature, the chicken attacks, pecking furiously at the snake as it flips onto its back and plays dead. 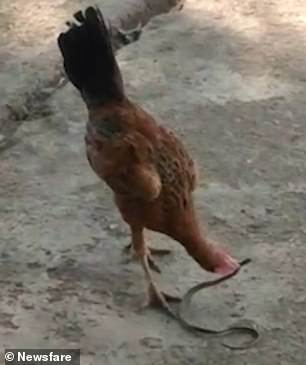 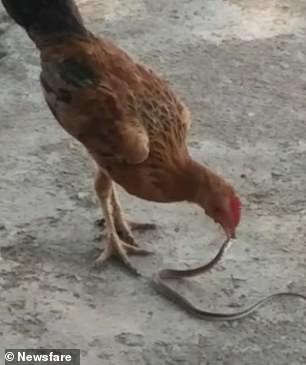 The video, filmed near Kalburgi in Karnataka, captures the brave chicken as it begins to swallow a snake

Hukeri, who filmed the bizarre scenes, said he was initially worried when he saw the snake in his back garden on Sunday, December 2.

The farmer said he was concerned the reptile, which he believed to be a cobra, would kill his chickens and pose a threat to his family.

But Hukeri watched in amazement as the chicken stepped in to defends its flock.

In the clip, the brave critter picks up the snake with its beak and proceeds to swallow the entire reptile whole. 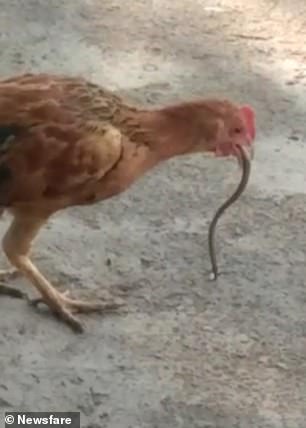 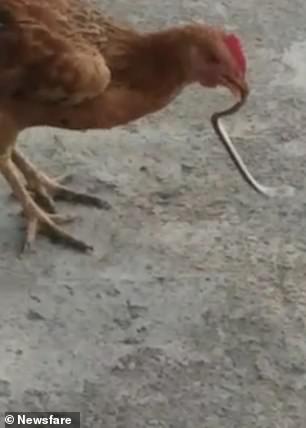 The chicken picks up the snake, believed to be a young cobra, with its beak as it squirms in its mouth

The snake then begins to squirm in the chicken’s mouth in a desperate bid to escape.

But the bird just shakes its head and continues swallowing until the entire creature disappears down its throat.

The fearless chicken then walks away from the patio as its shocked owner looks on in awe.