Staff end working from home stint and commute back to work 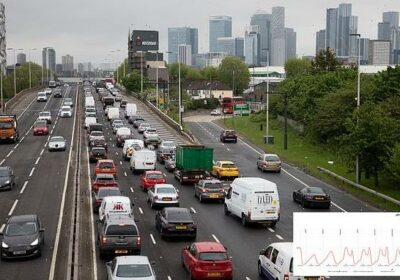 ‘First day in office for 435 DAYS!’: Staff end WFH stint and commute back to work as ‘Rule of Six’ is allowed indoors again while rush hour data reveals roads are BUSIER today than same day in 2019

Britons headed back to the office for the first time in more than a year today as commuters continued to return to city centres with lockdown rules easing further.

Office staff posted selfies on social media as they took the train in to work this morning – with some saying it was their first time back in since March 2020.

Some parts of the mainline rail network expect passenger numbers to return to up to 85 per cent of pre-Covid levels today as step three of the roadmap gets underway.

The Government still wants people to work from home if they can, but Prime Minister Boris Johnson has said it is his ‘intention’ to end this guidance from June 21.

Also in step three today, six people or two households will be allowed to meet indoors again – and pubs and restaurants will be able to serve customers indoors. 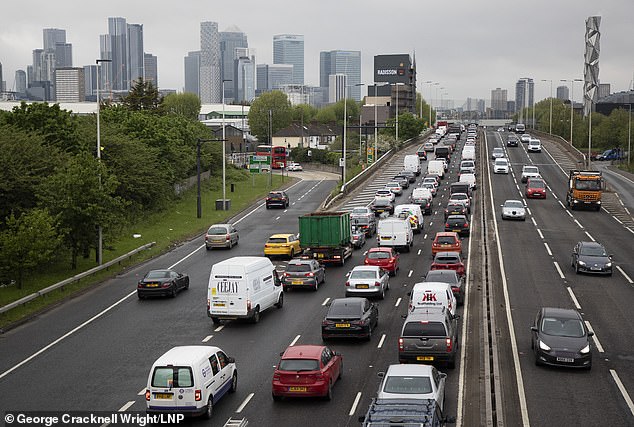 Rush-hour traffic builds up on the A102 in Greenwich, South East London, this morning

Last week in the House of Commons, Conservative MP Felicity Buchan said areas like central London were ‘hurting, partly because of the lack of commuters’.

The Prime Minister said it was ‘certainly our intention’ to allow people to go back to work next month, and said ‘more clarity’ would be provided by the end of May.

Boris Johnson has called for a ‘heavy dose of caution’ as indoor socialising and physical contact resumed against the backdrop of concerns over the Indian coronavirus variant.

The Prime Minister said ‘now everyone must play their part’ as England pushed ahead with the third stage of the road map out of lockdown on Monday.

Pubs and restaurants will be able to welcome customers back indoors, visits to the homes of friends and family can resume and the foreign holiday ban has ended.

Hugs and other physical contact between households are also permitted for the first time since restrictions began more than a year ago.

But the measures were eased as top scientists called for caution and warned of a ‘perilous moment’, with the Indian variant feared to be as much as 50 per cent more transmissible than the Kent strain.

In a statement, Mr Johnson said: ‘Together we have reached another milestone in our road map out of lockdown, but we must take this next step with a heavy dose of caution.

‘We are keeping the spread of the variant first identified in India under close observation and taking swift action where infection rates are rising.’

He said the ‘current data does not indicate unsustainable pressure on the NHS’, and that second vaccine doses are being accelerated to give the greatest protection to the most vulnerable.

‘But now everyone must play their part – by getting tested twice a week, coming forward for your vaccine when called and remembering hands, face, space and fresh air,’ he added.

Ministers are hoping surge testing and vaccines will allow a safe opening up of the nation, with jabs due to be extended to the over-35s this week.

But Health Secretary Matt Hancock did not rule out the possibility of imposing local lockdowns in areas such as Bolton to tackle the Indian variant, which he warned could ‘spread like wildfire’.

He added: ‘London and our other great cities depend on people having the confidence to go to work. I think it will come back, and I think it could come back remarkably quickly, but it does depend on keeping the virus down.’

It comes after car and public transport use has surged in recent weeks in a sign Britons are itching to return to offices and city centres as lockdown restrictions are eased.

Department for Transport figures show daily car traffic volumes jumped from an average 65 per cent of pre-pandemic levels at the beginning of March to 86 per cent on the week of May 3 to 9.

Bus passenger numbers also paint a picture of a nation raring to return to pre-Covid normality.

Bus use between the same periods outside London soared from 31 per cent of pre-Covid levels in March to a daily average of 57 per cent last week, while in the capital it jumped from 37 per cent to 58 per cent.

The London Underground saw passenger numbers more than double from 19 per cent to 39 per cent.

Travel dipped slightly on Monday, May 3 compared to other days in the week because it was a Bank Holiday, meaning average daily usage across that week would have been even higher were it a normal day.

Despite the large leap in volumes, the figures suggest people are still far more willing to return to their cars than public transport, with a long way still to go before a return to pre-Covid levels.

This is partly due to social distancing measures still in place on buses and trains, which limit the numbers able to board.

More people switching to home working is also a factor, along with some people still being apprehensive about taking public transport for fear of catching the virus.

Earlier this month a coalition of public transport providers teamed up with hospitality chiefs by sending a letter to Boris Johnson urging him to encourage people back onto buses and trains as more lockdown restrictions are lifted.

The letter was signed by British Chambers of Commerce, the British Retail Consortium, UK Hospitality, CBI, the British Beer and Pub Association the Rail Delivery Group and the Confederation of Passenger Transport.

Paul Tuohy, Chief Executive of Campaign for Better Transport, said: ‘As England prepares to take the next step out of lockdown, it is vital that the Government sends a loud and clear message that travelling by public transport is both safe and desirable.

‘Without this we risk slowing down the high street recovery as many people will simply stay away, or worse seeing towns and cities more reliant on public transport being left behind while car-heavy areas experience increased pollution and congestion.’

Kate Nicholls, chief executive of UK Hospitality, said: ‘It is vital for hospitality – and for Britain’s beleaguered high streets – that the public know that they can travel safely into towns and cities.

‘Considerable efforts and investments have ensured that it is safe to do so, and that fact must be conveyed far and wide.’

Car traffic volumes hit lows of 22 per cent of pre-pandemic levels after the first lockdown began in March 2020, with mainline rail passenger numbers plummeting to 4 per cent.

London Tube passenger levels sunk to just 3 per cent at one point while they fell to 10 per cent for buses across the country.