Home » World News » South of the Amazon, battle is on to save wetlands and jaguars from record fires

South of the Amazon, battle is on to save wetlands and jaguars from record fires Rio de Janeiro: A vast swath of a vital wetlands is burning in Brazil, sweeping across several national parks and obscuring the sun behind dense smoke.

The fires have infiltrated a state park known for its population of jaguars and other wildlife as firefighters, environmentalists and farmers in the world’s largest tropical wetlands struggle to smother record blazes.

The fire had surrounded the Encontro das Aguas (Meeting of the Waters) park in the Pantanal region, located at the border of Mato Grosso and Mato Grosso do Sul states, but for a time rivers helped keep the blazes at bay. 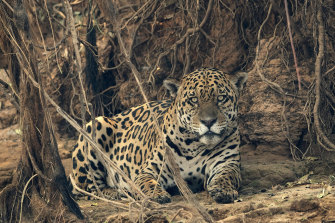 A jaguar lays near an area recently scorched by wildfires at the Encontro das Aguas park in the Pantanal wetlands near Pocone, Mato Grosso state, Brazil.Credit:AP

There is little outlook for any near-term help from rainfall, said the Mato Grosso firefighters’ spokeswoman, Lieutenant Colonel Sheila Sebalhos.

“The forecast isn’t good,” Sebalhos said by phone from the state capital of Cuiaba, after spending weeks in the fire zone. “High speeds of those winds that change direction many times throughout the day are favouring the rapid spread [of fire].”

The Pantanal is home to thousands of plant and animal species, including 159 mammals, and it abounds with jaguars, according to environmental group WWF. During the wet season, rivers overflow and make most of the region accessible only by boat and plane. In the dry season, wildlife enthusiasts flock to see the normally furtive felines lounging on riverbanks, along with macaws, alligators and capybaras. 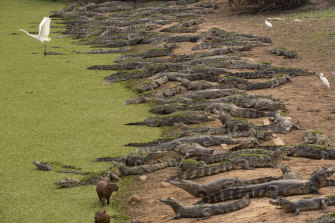 Alligators, capybaras and egrets stand on the banks of the Bento Gomes river whose waters are drying out, next to the Transpantaneira road at the Pantanal wetlands near Pocone, Mato Grosso state, Brazil.Credit:AP

A team of veterinarians, biologists and local guides arrived in late August to prowl the bumpy dirt road known as the Trans-Pantanal Highway in utes, looking to save what injured animals they could.

Jaguars were wandering the blackened wasteland, they said, starving or going thirsty, with paws burnt to the bone, lungs blackened by smoke. They saw bodies of alligators, jaws frozen in silent screams.

This massive fire is one of thousands of blazes sweeping the Pantanal this year in what climate scientists fear could become a new normal, echoing the rise in climate-driven fires from California to Australia.

The Pantanal is smaller and less-known than its famous cousin, the Amazon jungle. But the region's normally abundant waters and strategic location – sandwiched between the rainforest, Brazil's vast grasslands and Paraguay's dry forests – make it a magnet for animals. 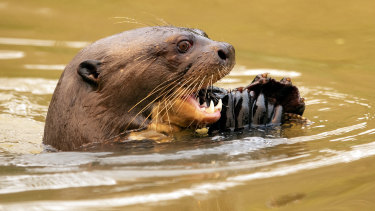 An otter eats a fish at the Encontro das Aguas park at the Pantanal wetlands near Pocone, Mato Grosso state.Credit:AP

Some 200 jaguars have already suffered injury, death or displacement because of the fires, according to Panthera, an international wild cat conservation organisation.

What’s unique about the park, which covers more than 1000 square kilometres, is that the jaguars are used to human observation. They have been a top eco-tourism draw for more than 15 years, according to Fernando Tortato, a conservation scientist for Panthera, which owns a neighbouring property where jaguars range.

Even before fires started raging, employees and volunteers used two earth-movers to create a firebreak around the property’s perimeter. Since blazes arrived, the group has tracked the shifting winds to open new firebreaks and head off the devastation. 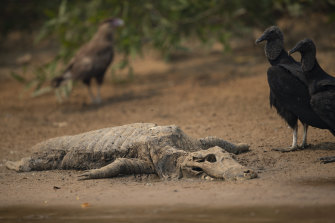 Vultures stand next to the carcass of a alligator on the banks of the Cuiaba river at the Encontro das Aguas Park in the Pantanal .Credit:AP

“We prepare the team, a truck with a water pump, fire swatters and backpack water pumps so that, in case the fire jumps that barrier, we can combat it,” Tortato said by phone. “It’s the only strategy that has managed to resolve the fire, in some situations.”

Despite tireless efforts, some 15 per cent of Panthera’s sprawling property has been consumed by fire, he said.

The Pantanal is located mostly in Brazil and stretches into Bolivia and Paraguay. Whereas farmers in the Amazon often use fire to clear brush and open new pasture, fires in the Pantanal are often unintentional, set by locals and then spiralling out of control due to climate conditions, according to Felipe Dias, executive director of environmental group SOS Pantanal. One cause of this year's Pantanal fires was the use of burning roots to smoke wild bees out of their hives to extract honey, said Sebalhos.

This year has been the Pantanal's driest in 47 years, and rain isn't expected until October, Dias said. Only rain can truly extinguish the wildfire, he added. 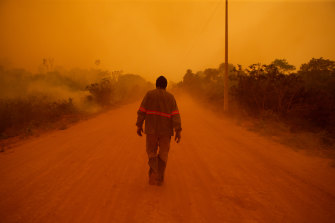 “There’s a climate problem. The rains happen in a concentrated way and then 30, 40, 50 days go by without rain,” Dias said. “The Pantanal is a flood plain; the soil should be soaked.”

The number of fires the area has seen so far this year already exceeds the annual totals for every year on record, stretching back to 1998, and is more than double the annual average for the prior 10 years, according to data from the government’s space agency, which uses satellites to count the blazes. More than 10 per cent of the area has been consumed by fire this year, according to WWF and SOS Pantanal. 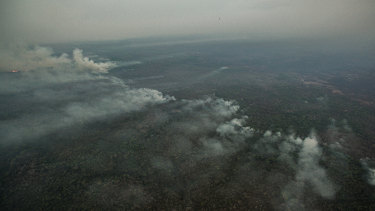 Fires burn in the Pantanal wetlands region in Mato Grosso state on Saturday.Credit:Bloomberg

President Jair Bolsonaro, a staunch supporter of development in the country's hinterland, bowed to international pressure and issued a decree in July prohibiting the use of fire to clear land in the Amazon and Pantanal regions throughout this year’s dry season. In practice, it’s done little to slow the burn, with scant enforcement of his moratorium, environmentalists say. The Environment Ministry didn't respond to requests for comment about its oversight.

The government dispatched 173 members of the armed forces to Mato Grosso and Mato Grosso do Sul states, along with 139 firefighters from the Chico Mendes Institute, the arm of the ministry that manages federal parks, according to the Defence Ministry. Tallies provided by state firefighter corps indicate the numbers might be significantly fewer. Bolsonaro has chalked up difficulties in fighting the Pantanal fires to the size of the affected area. 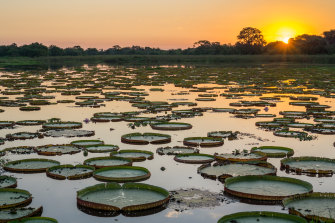 The Pantanal’s fauna and flora are one of Brazil’s biggest tourism attractions.Credit:Shutterstock

“I started to suffer criticism because the Pantanal is on fire,” the President said on August 20 in a live broadcast on Facebook. He noted the vastness of the Pantanal, saying: “You can imagine the difficulty of fighting the fire in that area.”

Unlike the Amazon that has a slew of federally protected areas, some 95 per cent of the Pantanal is privately owned, according to WWF and SOS Pantanal. The swamp land can also regenerate quickly.

There are about 2000 jaguars in an area that is called the Jaguar Conservation Unit, which is half of the Pantanal, according to Panthera.

Between 80 per cent and 90 per cent of Meeting of the Waters is susceptible to fire, with the remaining rivers, brooks and swamps currently serving as refuges for fauna, Tortato said. The most vulnerable creatures are baby birds, reptiles and amphibians, whereas larger mammals have greater ability to flee and survive.

Colonel Paulo Barroso, who is coordinating animal rescue for Mato Grosso state’s environment secretariat, hopes animals will escape to the private Sao Joao ranch adjacent to the park. He said his strategy was to start making firebreaks on Thursday to guide animals to an artificial safe haven.

“We’re trying to defend this space [park] against the threat from some fires, it’s just that there are fires coming from all sides,” Barroso said. “The fire fronts are closing in on the park and the idea is to create an island to receive those animals and protect them.”