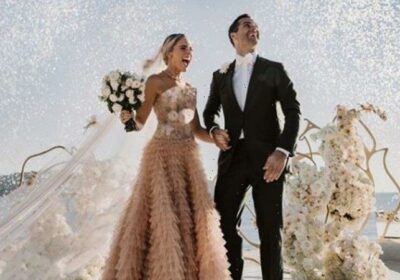 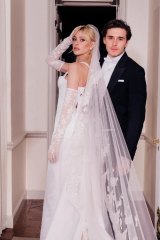 Heiress and actress Nicola Peltz and Brooklyn Beckham, the son of David and Victoria Beckham (aka Posh Spice).Credit:German Larkin/British Vogue

The wedding of Brooklyn Beckham and billionaire heiress Nicola Peltz last week marked the union of two powerful dynasties from either side of the pond. Brooklyn, 23, is the eldest son of footballer David Beckham and pop-star-turned-designer Victoria Beckham. American actress Nicola is the 27-year-old daughter of billionaire businessman Nelson Peltz and his former model wife, Claudia Heffner Peltz.

Jake is the son of multimillion-dollar superyacht broker and owner of the Rose Bay Marina, Denis O’Neil, while Lou is daughter of multimillionaire brush pioneer and founder of Hayco, the late Donald Hay.

The couple are eastern suburbs mainstays with plenty of ultra-wealthy and powerful friends in their private inner circle. Their marriage is just one of the unions to have merged some of Sydney’s most influential dynasties. 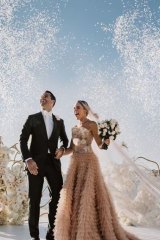 Deborah made headlines in Sydney’s society pages in 2018 when she married Ned O’Neil in a lavish ceremony on Hamilton Island.Credit:Instagram

The pair hired out the entire Qualia resort on Queensland’s Hamilton Island for the three-day extravaganza, exchanging vows in front of 120 of their family and friends.

Deb, now a mother-of-two, founded luxury clothing boutique Mode Sportif in 2015 enlisting the interior design expertise of her sister-in-law Poppy Tzaneros (nee O’Neil, sister to Ned and Jake) when she was fitting out the Double Bay boutique.

Marriage has also united the Waterhouse racing clan with the Vakili family.

Tom Waterhouse, son of Gai and Robbie Waterhouse, tied the knot with his university sweetheart Hoda Waterhouse (nee Vakili) in 2012.

Hoda is the daughter of Harry (Hassan) Vakili and Jilla, who are founders of IT service platform mcrIT and active property developers.