Snow could fall TODAY in London, Wales and parts of south-east 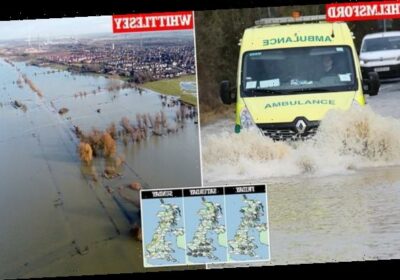 Heavy snow flurries will hit parts of the UK in the coming days, with treacherous icy conditions and heavy rain also affecting many people.

A yellow warning for ice covers much of north-east England and large parts of Scotland until 11am on Saturday, bringing dangerous conditions for motorists.

Heavy snow is forecast for large parts of Wales throughout Saturday, while small flurries could hit London and parts of south-east England, the Met Office said. 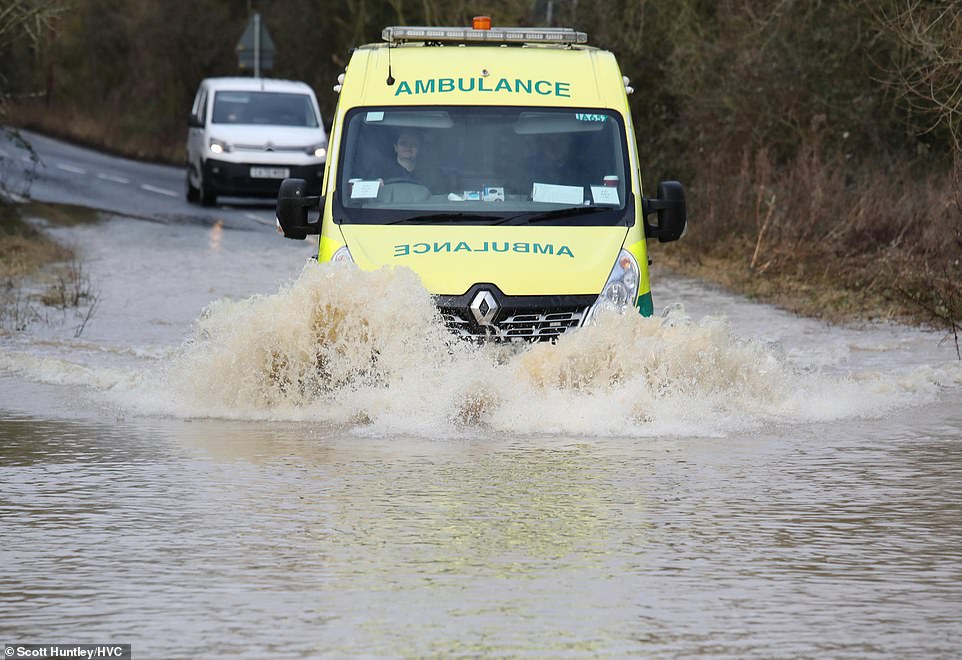 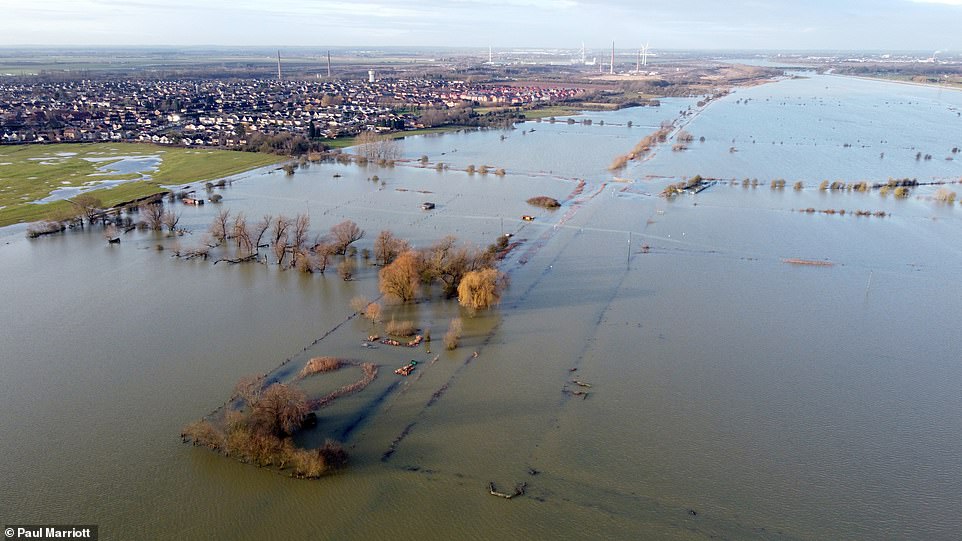 Floodwater sitting on fields and has closed the road from Thorney to Whittlesey, Cambridgeshire yesterday 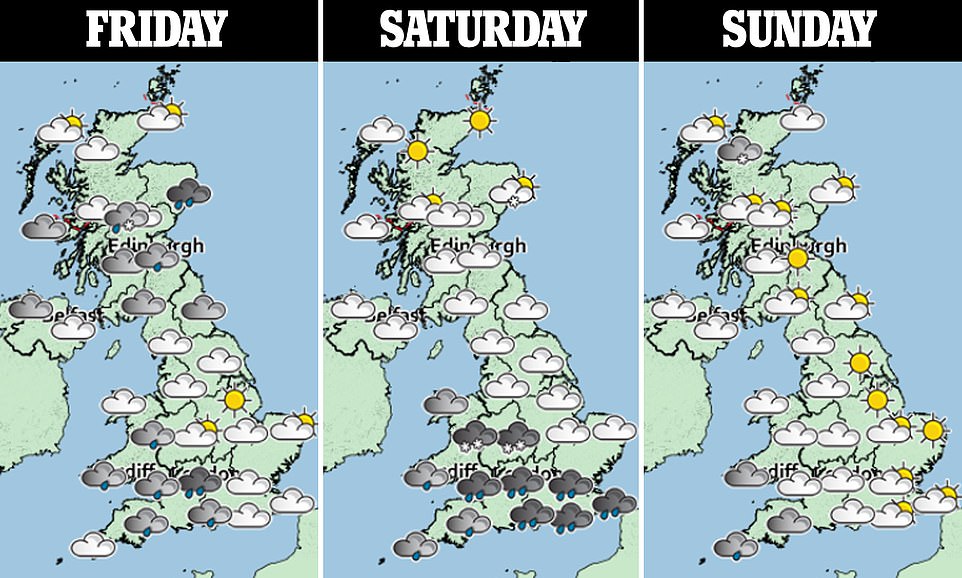 Torrential rain is forecast across Cornwall and much of Devon until 8pm on Saturday evening, bringing the risk of flooding and transport disruption.

Forecasters said 15-25mm of rain could fall widely, with 40-50mm possible across Dartmoor and near to the south coast.

The Environment Agency had 69 flood warnings in place across England on Friday evening meaning immediate action is required, and 231 alerts, meaning flooding is possible.

Nicola Maxey, a Met Office spokeswoman, told the PA news agency the downpours will be caused by a weather front moving in from the South West.

Ms Maxey said: ‘From Friday evening we’ve got a series of weather fronts bringing rain across Cornwall and much of Devon until tomorrow.

‘As this rain starts to move north it will combine with cold air already over the UK, causing snow across much of Wales, where up to 20cm could fall in the highest regions.

‘Over the weekend large swathes of the UK will see some form of snow, with warnings in place for much of Scotland and the north east of England.

‘Even parts of London and the South East should see a small flurry, which is unlikely to settle.’

It comes after parts of Scotland were blanketed by up to 19cm of snow in just 24 hours overnight on Thursday, while areas in south-west England recorded almost 30mm of rainfall.

Much of England and Wales will also see snowfall and widespread ice between Monday and Wednesday, with warnings over road closures, power cuts and risk of injury due to ice.

Forecasters added some rural communities could become ‘cut off’ due to the wintry weather.

Ms Maxey said the weekend will also be very cold, with the highest temperatures only reaching 6C, along with frost on both mornings.

Met Office chief meteorologist Andy Page added: ‘The most likely areas for disruptive snow are across Wales and over the Cotswolds, where there is the risk of a few centimetres accumulating at lower elevations, but this could increase to 15cm or more at locations above 250m.

‘Saturday night will see temperatures falling away from the far South West, with a widespread sharp frost likely across the rest of the UK.’

Ms Maxey added: ‘As we move into next week another front will move in from the South West with long periods of snow and icy conditions for most of England, Wales and Scotland.

‘Up to 5cm is expected off the coasts, which will reach highs of 15cm in the higher areas in Scotland and Wales.’

She warned drivers to prepare cautiously for ‘dangerous’ icy conditions, which could cause some disruption and potential injury. 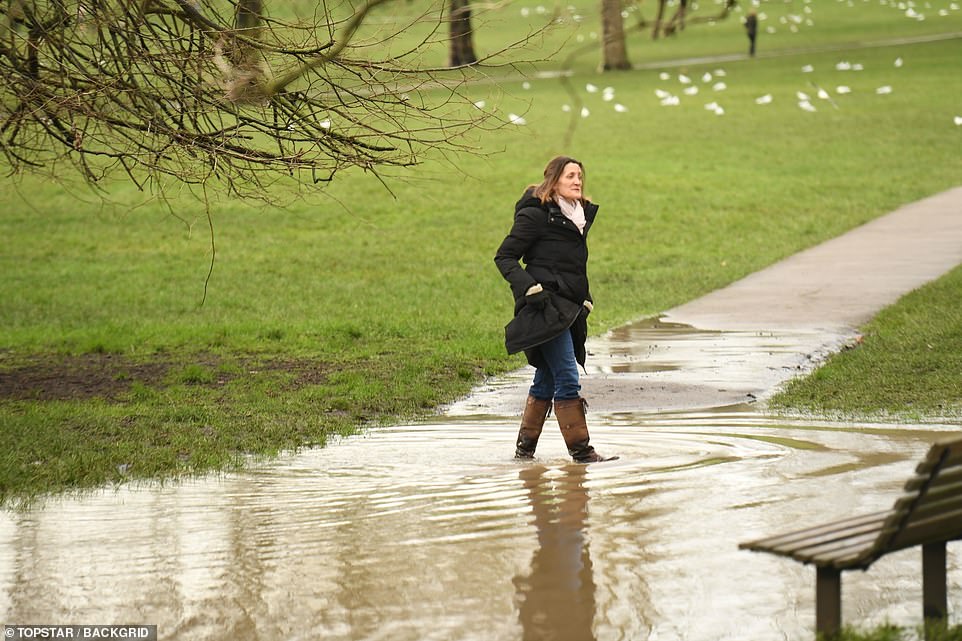 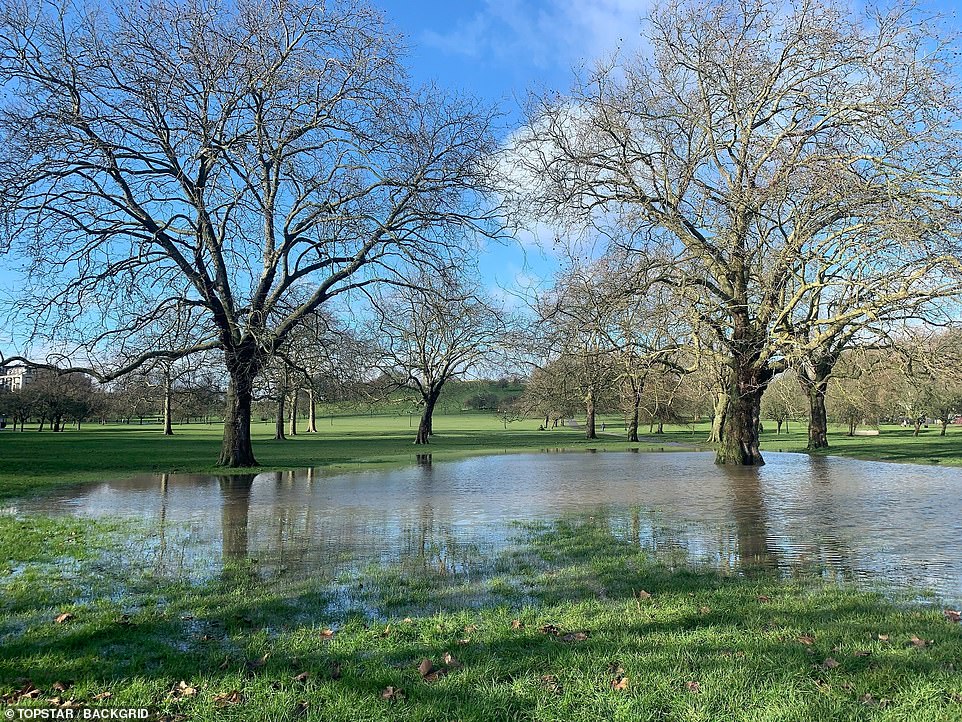