Given his love of a kickabout, it’s no surprise he’s built a pitch.

But judging by Rod Stewart’s £4.7million mansion, football is far from the only sport on his mind.

Not only does it have a croquet lawn, but the singer has added an indoor pool, a trampoline and a skate ramp.

Sir Rod, 75, and wife Penny Lancaster, 49, finally have their dream home which boasts ten bedrooms and sits on a sprawling 46 acres of land. Durrington House, near Harlow, has impressive facilities such as four self-contained cottages, a walled garden, croquet lawn, pavilion and clock tower.

Sir Rod and his family moved into the property in 2016, three years after they bought it for £4.65million, and have been undertaking extensive remodelling ever since.

The couple’s sons Alastair, 14, and Aiden, nine, will be entertained thanks to the trampoline and 50ft indoor pool.

Sir Rod was given planning permission for the pool at the mansion in 2017 after Alastair showed a keen interest in swimming. The pool house also has changing facilities, a spa pool, bar and dining area.

In 2016 the Celtic FC fan was granted permission to build the football pitch but his request to have it floodlit was denied on the grounds that it could cause light pollution.

Photos show the pitch, complete with the Glasgow team’s flag, as well as the couple’s immaculate expanse of lawn with topiary and statues.

There is also a large ornamental lake at the front of the property and an ornamental pond in the walled garden at the rear.

In July the couple won planning permission to set four ancient Greek-inspired statues into the four pillars of a classical portico to be built overlooking the pond. 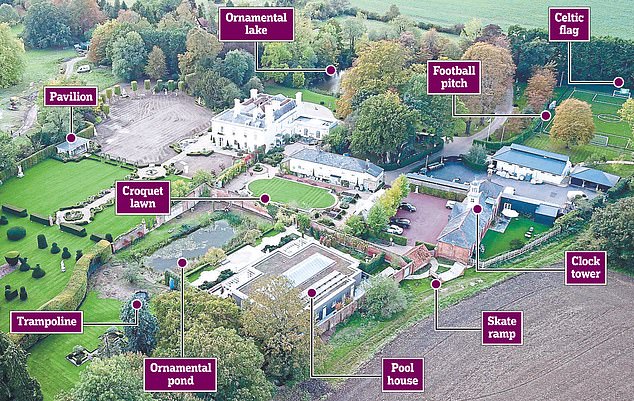 They must apply for planning permission for any alterations to the property because the house is Grade II listed.

Plans to dig up an existing historic walled garden and erect decking over the pond were vetoed so its banks can remain in a ‘more naturalised state’. Sir Rod and Miss Lancaster, who split their time between Durrington House and their property in Florida, shared a number of photos from inside the Essex mansion during lockdown.

Miss Lancaster said in August: ‘We always consider ourselves extremely lucky with this whole lockdown having a bigger property and land where we could stretch and get exercise.’