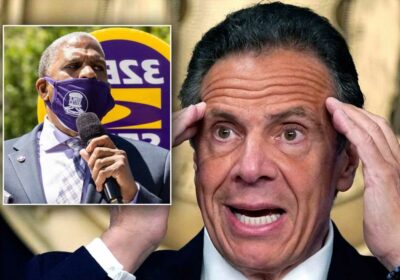 Multiple major unions that previously backed Gov. Andrew Cuomo and became key to his enduring political entrenchment have jumped ship since the release of a damning investigative report by Attorney General Letitia James.

“The first job of any elected official is keeping safe the people they serve; it is clear from the appalling findings of the Attorney General’s report, Governor Cuomo failed to do that,” Mario Cilento, president of the New York State AFL-CIO, said Wednesday.

“We fought for and won the very worker protections that were violated; there must be accountability without exception,” he added. “Governor Cuomo can no longer lead the state.”

While the leader of the transit workers union recently said he was “over” Cuomo, the governor still had allies in the organized labor movement.

But in a sign of how quickly the political winds have shifted against the governor in the face of the report’s stunning findings of potential criminal conduct and serial sexual harassment, building service worker union 32-BJ president Kyle Bragg — who like Cilento attended Cuomo’s pricey reelection fundraiser in late June — on Tuesday afternoon denounced him and said he should step aside.

“We cannot turn a blind eye to the harassment perpetuated by Governor Cuomo. It is evident he is no longer fit to serve,” said DC37 executive director Henry Garrido in a statement Wednesday.

“The Governor must resign. If he does not, the Assembly must begin the process to impeach.”

The head of the Hotel Trades Council called the actions detailed in James’ report “disturbing” and said Cuomo should be removed from office if he doesn’t voluntarily leave it.

“The behavior described in the Attorney General’s report is deeply disturbing and should never be tolerated in any workplace. It is clear from the conclusions of the report that Governor Cuomo cannot continue to lead the state,” said HTC president Rich Maroko in a statement released Tuesday.

“If he does not resign, the Assembly should move promptly to impeach him.”

The denunciation comes after Cuomo previously had such strong ties with HTC that he appointed former president Peter Ward to the MTA board.

John Samuelsen, president of the Transportation Workers’ Union, told The Post the onslaught of unions declaring it’s time for Cuomo to go was inevitable.

“It was a no-brainer that this outcome would occur,” he said Tuesday. “The unions cannot continue to support a workplace violator.”