Crowds are broken up by police after hundreds queued outside trainer store in Liverpool as shops prepare for £5.2bn four-day spending spree from tomorrow

Police were today called to break up crowds outside a trainer store in Liverpool as hundreds queued to buy newly released shoes ahead of an anticipated £5.2billion four-day spending frenzy starting tomorrow.

Around 400 eager shoppers gathered outside Size? on Bold Street in anticipation of the release of the Nike Air Max 95 OG Neon trainers, with some even camping through the night to secure the £130 shoes.

The size of the crowd led to Merseyside Police being called to disperse gathering Britons ahead of the retailer’s scheduled opening on Thursday, and the shop was later closed to customers.

A force spokesperson told the Mirror: ‘We can confirm officers attended a shop in Liverpool city centre this morning (Thursday 17 December) to a report of a large gathering outside.

‘We were called just after 7.05am to a report a crowd had gathered outside Size on Bold Street ahead of its scheduled opening. After opening, staff at the store secured the doors to prevent further customers entering.

Swathes of shoppers also lined up around the block in London’s West End today, with pictures taken on Bond Street showing crowds rushing to make their Christmas purchases – including dozens waiting patiently outside luxury designer Hermes.

The retail bonanza all got a bit too much for some, who let off steam with a takeaway pint – newly returned to the capital since sitting inside pubs was banned under Tier 3 rules.

Non-essential shops remain open even under the tougher rules, meaning the high street should be able to capitalise on some of the spending splurge even if much will go online.

However, the West End crowds were far sparser than normal for the festive season, as many people stayed away due to the pandemic. 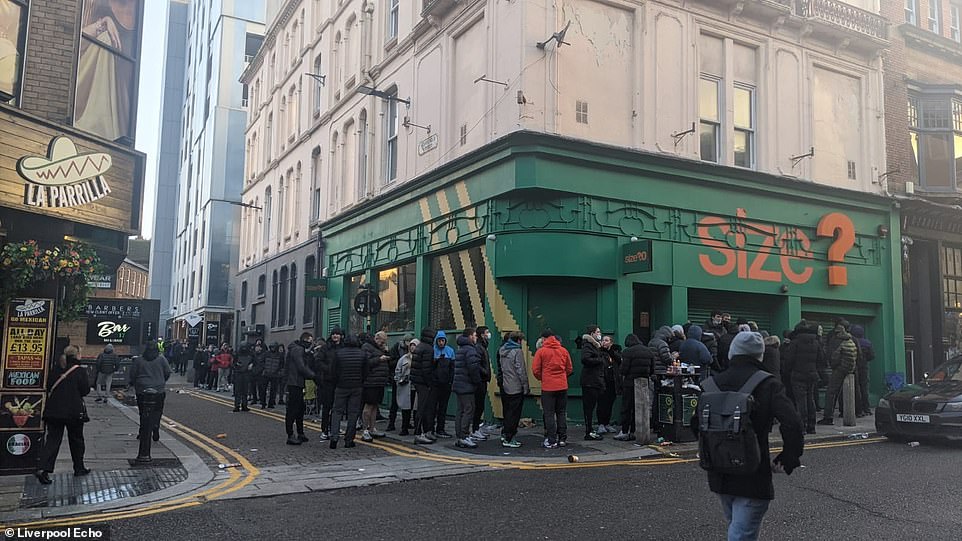 Crowds of shoppers were dispersed this morning after hundreds of people queued up outside Size? on Bold Street, Liverpool 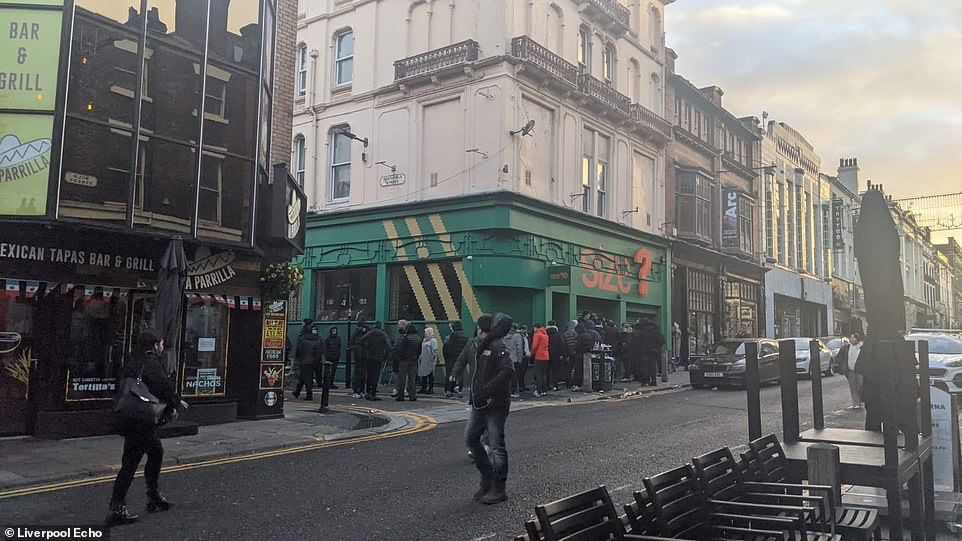 It is thought around 400 people gathered to get in line for the Nike Air Max 95 OG Neon release, with some even camping through the night 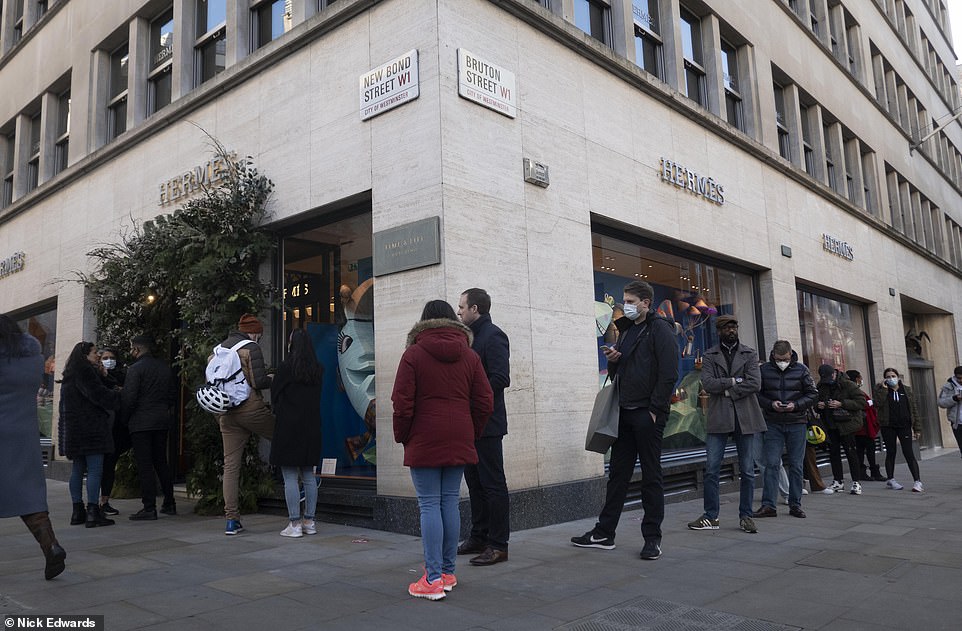 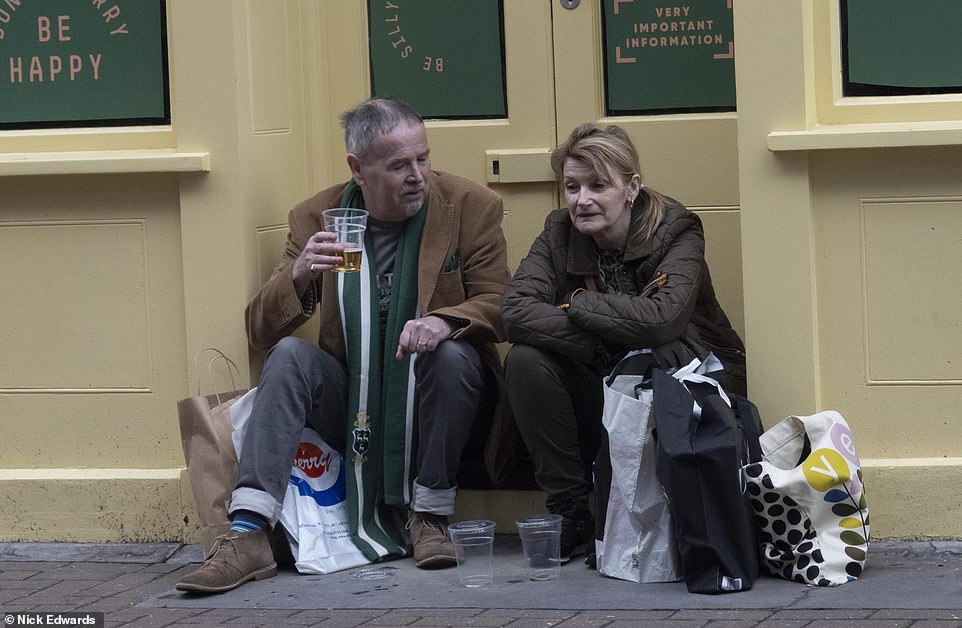 Two shoppers enjoying a takeaway drink outside a pub on Carnaby Street. Hospitality are banned from allowing people to sit inside under Tier Three rules 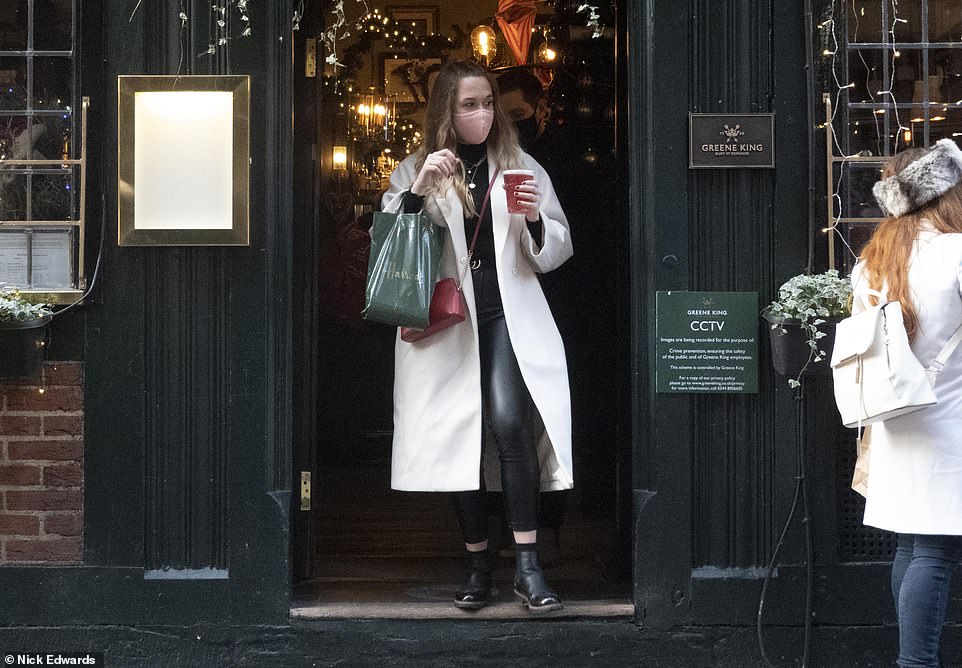 A woman carrying a drink leaves a pub on Carnaby Street in London’s West End, where shoppers were making Christmas purchases

The latest footfall figures from Springboard found shopping centres had seen a 2.8 per cent increase in visitors on last week – but a 33 per cent drop on the same time last year.

Retail parks had also seen a relative boost, surging by 1.3 per cent on last week despite declining by 11.8 per cent on 2019.

All areas in the country have seen visitors fall on last week and last year, with London’s dropping by 4.4 per cent and 64.8 per cent respectively.

Meanwhile coastal towns have also seen tourists decline by 3.5 per cent on last week and 24.8 per cent based on last year’s figures.

But in a boost for businesses, research by VoucherCodes.co.uk and the Centre for Retail Research found £2.5million will be spent in store every minute.

Trading is expected to peak for December on ‘super Saturday’ as 11.5million descend on the beleaguered High Street. 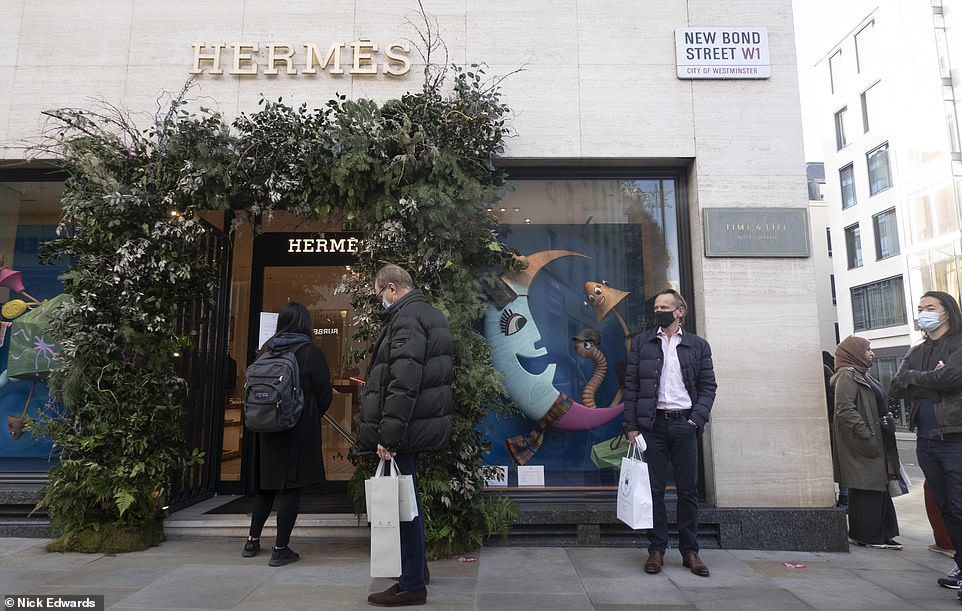 Non-essential shops remain open even under the tougher rules, meaning the high street should be able to capitalise on some of the spending splurge even if much will go online 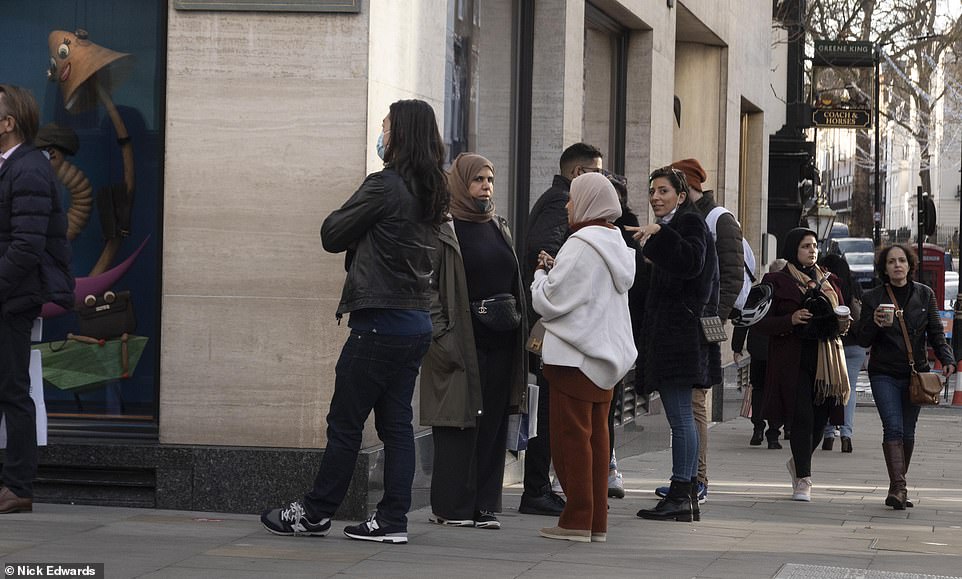 Shoppers queuing around the block to get into the Hermes store on Bond Street. In the background is the Coach and Horses, a Greene King pub

Footfall is predicted to leap by 12 per cent compared to last year but the total spent is expected to be 3 per cent less than in 2019.

London is expected to lead the charge for money spent, racking up a total of £504million on Friday and Saturday, closely followed by the South East spending £485million.

Sunday is also expected to see a huge amount of money exchange hands – £850million by 8.5million shoppers – but it is down eight per cent on last year.

On Monday, with just four days until December 25, the High Street is expected to welcome 11million customers spending a total of £1.3billion, which represents a 0.8 per cent rise on 2019.

Retail stores and supermarkets are expected to be especially busy this year due to most online retailers no longer being able to guarantee delivery in time for Christmas.

Lifestyle Editor at VoucherCodes.co.uk Anita Naik said: ‘The last full week before Christmas is always a busy period for retailers both offline and online.

‘After a difficult year for the high street, it’s encouraging to see spend is predicted to hit £2.5m in-store every minute.’ 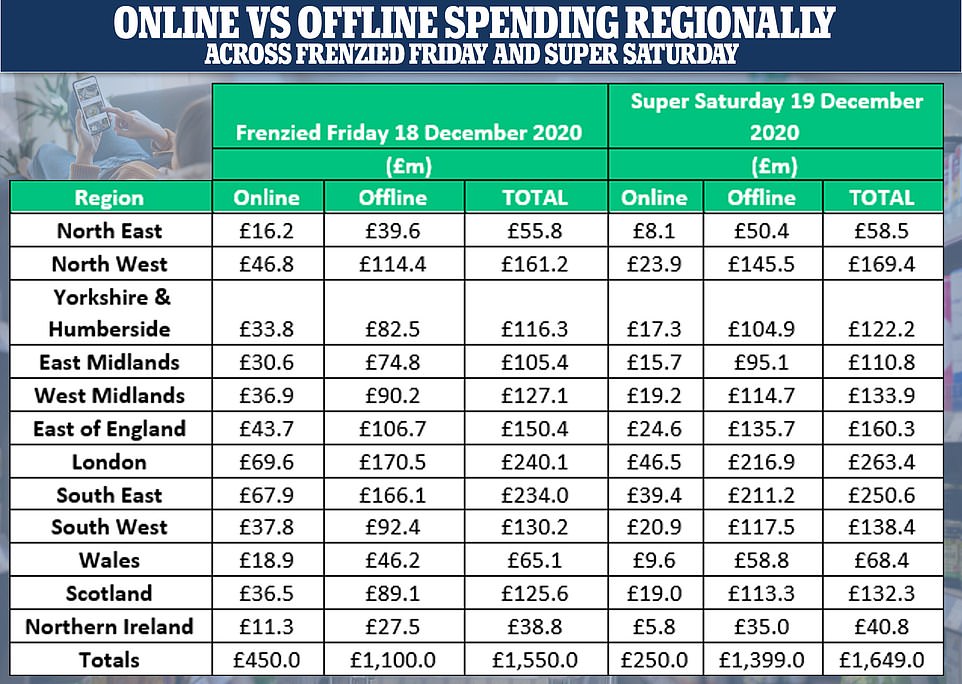 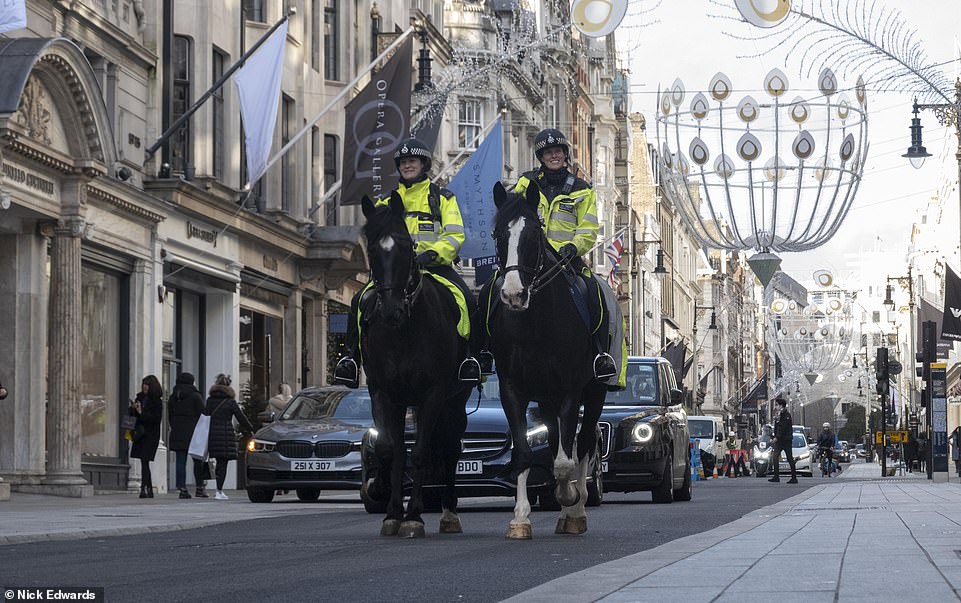 Police horses trotting down Bond Street today, which was quieter than usual for the festive season as many stayed away