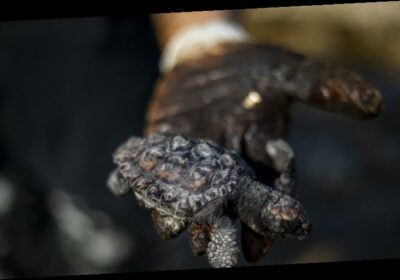 Jerusalem: Israel court has imposed a gag order on sensitive details surrounding its investigation into a major oil spill which has blackened beaches and which experts say is one of the worst environmental disasters in the country’s history.

After winter storms blanketed Middle Eastern cities with rare snow last week, the powerful winds and high waves covered Israeli beaches in at least 1000 tonnes of tar suspected to have come from an oil spill from a vessel several dozen kilometres offshore.

In an unusual move, an Israeli court issued a gag order on the investigation on Monday (Tuesday AEDT), banning the media from reporting any details that could identify the suspects, the vessels, their cargo, destination and port of departure. 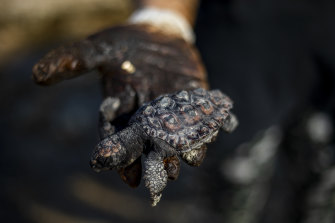 A dead sea turtle covered in tar following an oil spill in the Mediterranean Sea in Gador nature reserve near Hadera, Israel.Credit:AP

When the reporting restrictions were questioned by Israeli newspaper Haaretz, the Environmental Protection Ministry, which is investigating the spill alongside European agencies, said “publications at this sensitive stage could harm a complex investigation with international aspects”.

The oil, which was first noticed creeping up on beaches on Thursday, had washed up on around 160 kilometres of the country’s 190-km shoreline by Sunday, local time, according to officials. 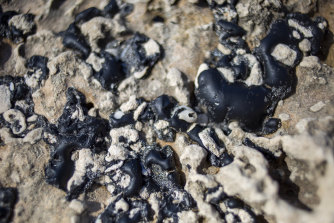 Tar sticks to rocks by the sea at Gador nature reserve near Hadera, Israel.Credit:AP

Thousands of volunteers took to beaches up and down the country over the weekend trying to free turtles from pools of tar and clear the beaches. Some had to be admitted to hospital because of the fumes they inhaled, the Times of Israel reported.

Oil was also seen washing up on the southern beaches of neighbouring Lebanon. Gila Gamliel, Israel’s environmental protection minister, said she hoped the nationwide clean-up would be completed by May for the start of the northern spring beach season.

Ruth Yahel, the Israel Nature and Parks Authority’s marine ecologist, said she believed no more than 5 to 10 per cent of small creatures in the nearshore ecosystem would survive.