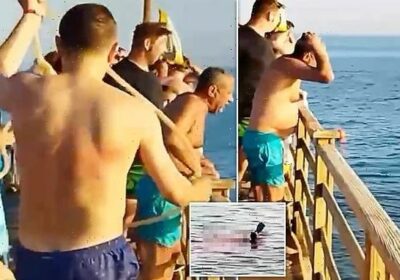 Shark killed a SECOND woman in the Red Sea resort of Hurghada just 650ft away from where Austrian snorkeller, 68, died after she lost an arm and a leg in horrifying attack that was caught on camera – as authorities ban people from the water

A second woman has died at a tourist hotspot in Egypt from a shark attack after horrific footage emerged of another Austrian pensioner being killed 650ft away.

Egyptian authorities admitted another lifeless body was pulled out of the sea after being located on a reef in Sahl Hasheesh, south of Hurghada, according to eyewitnesses.

The woman’s identity have not been revealed but she is believed to have been a Romanian tourist who was staying at adult-only Premiere Le Reve five star hotel.

This latest death is believed to have happened at the same time as the first woman from Kramsach, Tyrol was walking in shallow water while using a snorkel with fins not far from the beach near Hurghada and told her partner: ‘I’ll go back in for a moment’.

Footage then shows her clamouring toward safety with the aid of a flipper as the waters around her turned scarlet red in Sahl Hasheesh bay, south of Hurghada, in the Red Sea.

Terrified onlookers tried to distract the animal, which is believed to be either a Mako or a Oceanic whitetip shark, but no one jumped in to help her.

An Egyptian health official said she was then taken to the private Nile Hospital where she could not be resuscitated and is believed to have died from ‘painful shock’ – most likely a heart attack.

The Austrian embassy in Cairo said she had been in the country for a month with her partner, an Egyptian, and was due to return home today.

Yesterday, officials at the Red Sea Governorate told reporters that area of the attack and Hurghada would be closed to all sea activity including fishing and diving. The beach has been deserted in the wake of the deaths but will most likely reopen tomorrow. 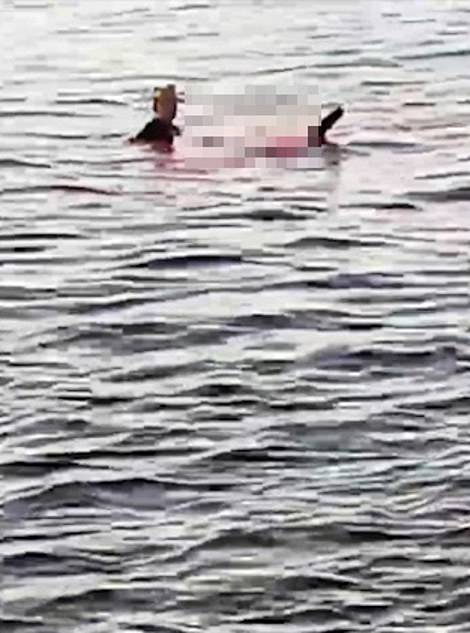 The Austrian tourist, who was married to an Egyptian man, used a flipper to try and clamour back to shore. But she died of ‘painful shock’ after reportedly losing and arm and a leg 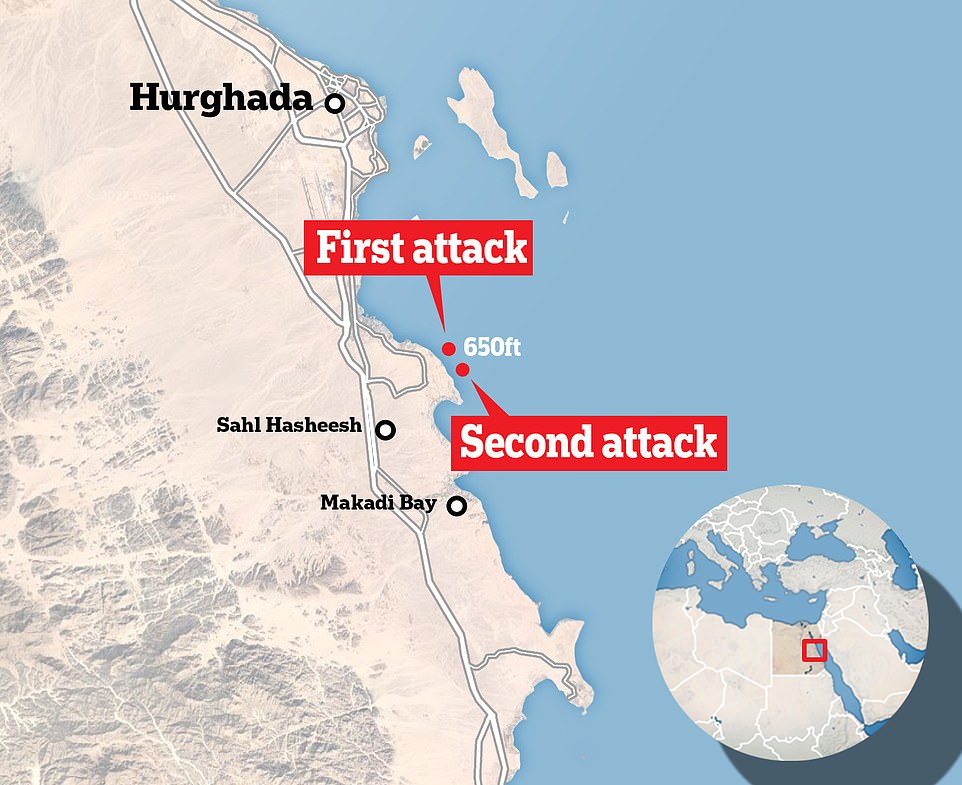 Both attacks took place very close by the first woman was taken from the waters in Sahl Hasheesh, south of Hurghada, 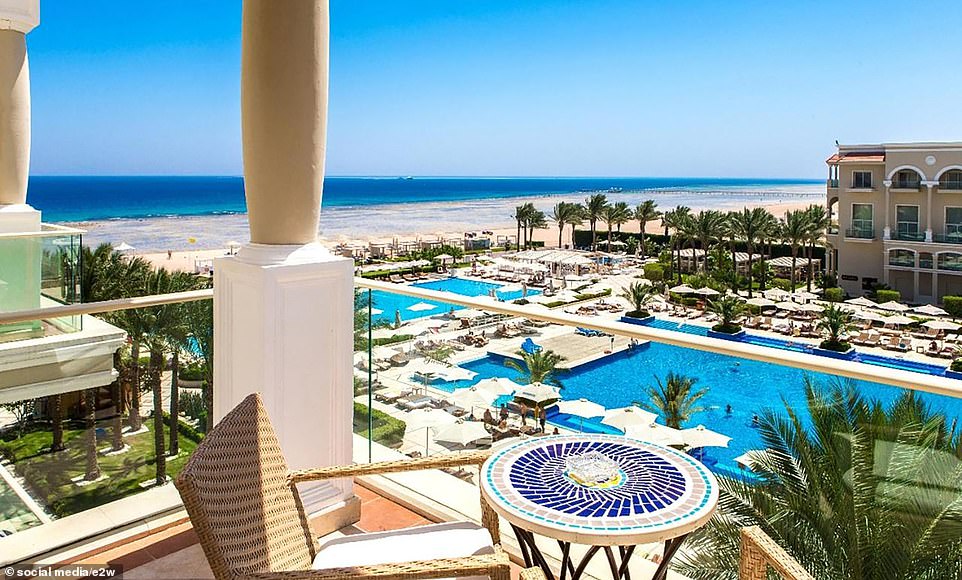 A second woman whose identity and nationality have not been revealed is believed to have been staying at adult-only Premiere Le Reve five star hotel (pictured). It is thought that this woman is a Romania 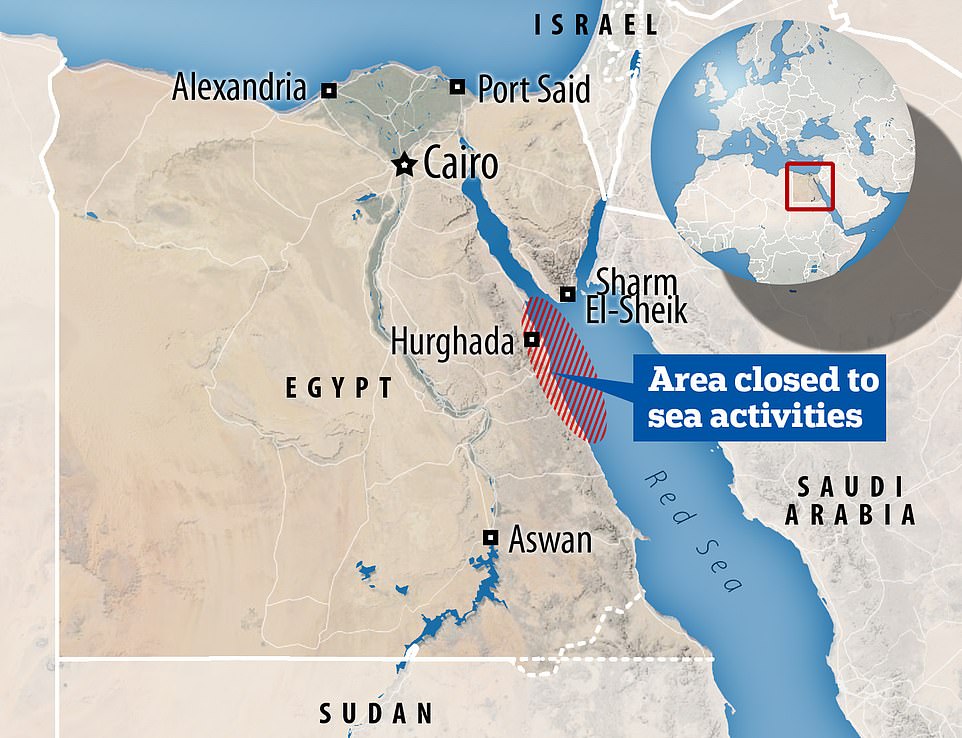 The Austrian pensioner, 68, died of ‘painful shock’ – most likely a heart attack – after the attack at Sahl Hasheesh bay, south of Hurghada, in the Red Sea on Friday 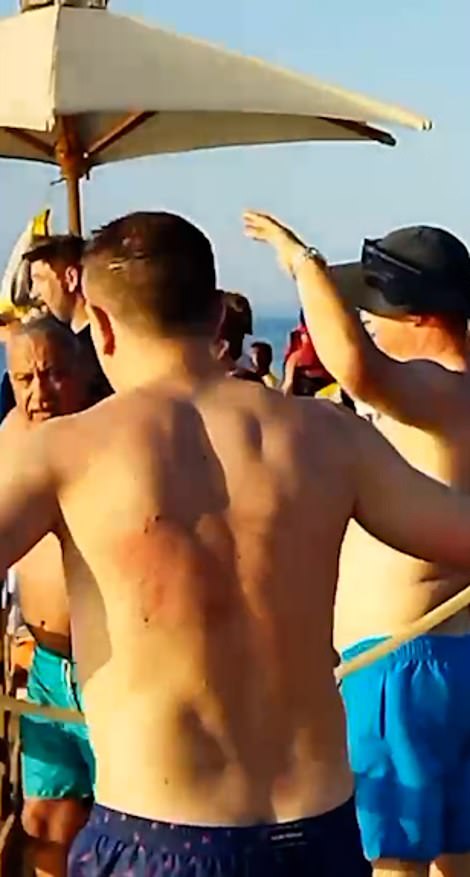 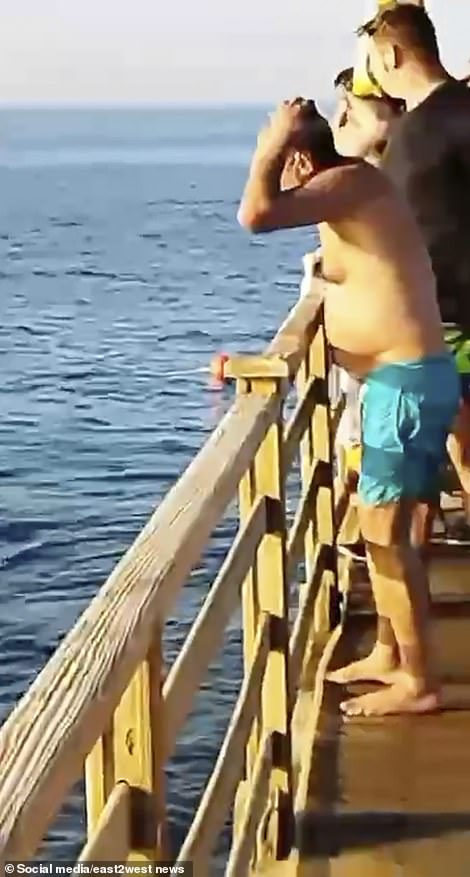 Horrified onlookers (left and right) yelled for help and tried to distract the shark, but did not jump in 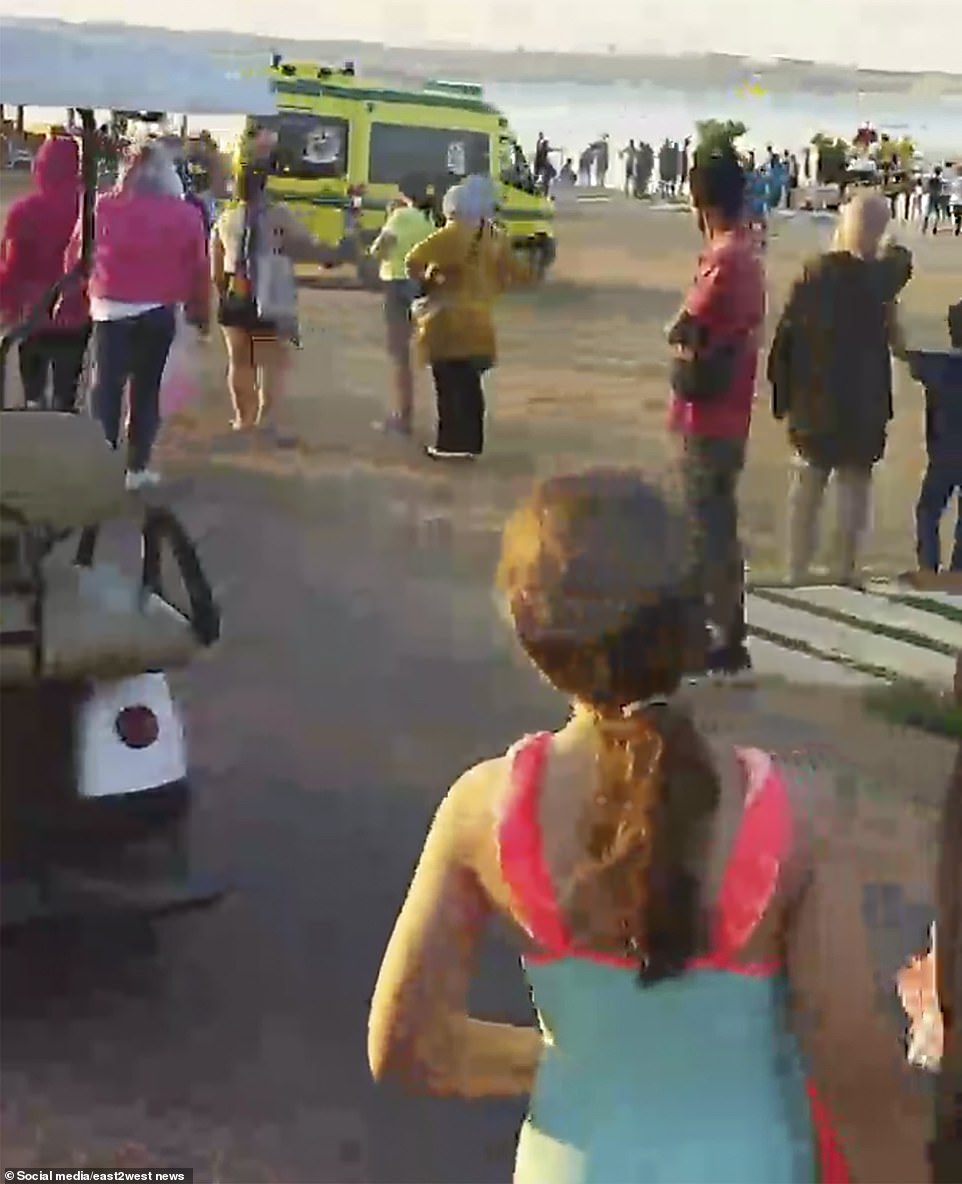 What is a Mako shark?

A mako shark is a species of swift, active, and potentially dangerous sharks of the mackerel shark family.

There is a shortfin and longfin species, depending on whether its open or shallow water.

Adults, prized for their fighting qualities and repeated leaps out of the water, can be 4.5 metres (14.8 feet) in length and exceed 500kg (about 1,100 pounds) in weight.

They prey on fishes such as herring, mackerel, and swordfish and small cetaceans.

The same unnamed Russian tourist who filmed footage – which is too graphic to be shown – in the aftermath of the first attack posted a new video showing the location of the second fatal incident.

Using his finger to explain, he said: ‘This is a small lagoon where we saw [the shark] for the first time.

‘And we didn’t realise it was a shark.

‘The attack I filmed [earlier] was here’ – he points towards the pier.

‘And the body of the second woman was pulled out approximately here.’

Hundreds of tourists had seen the first attack on the Austrian woman who had been snorkelling, wearing flippers, when she was attacked, and complained there were no lifeguards as swimmers fled the sea.

The Russian witness said: ‘I saw the shark turning and twisting the woman in the water. I didn’t manage to film it, but she was twisted in the water.’

Earlier he told how he saw the woman ‘fighting off [the shark] with her hands at first, but apparently the shark bit off her leg with a flipper first, then her hand, which it threw it on the corals.

‘She was already sitting on the corals, showing her hand [and] leg. She was in [a state of] shock. She didn’t even scream, didn’t cry, nothing.’

After miraculously making her way back to land, the German woman was given CPR by doctors at the scene but she died minutes later in an ambulance.

According to Tiroler Tageszeitung, the Austrian Ministry of Foreign Affairs is in contact with relatives, including the woman’s daughter, and the local authorities 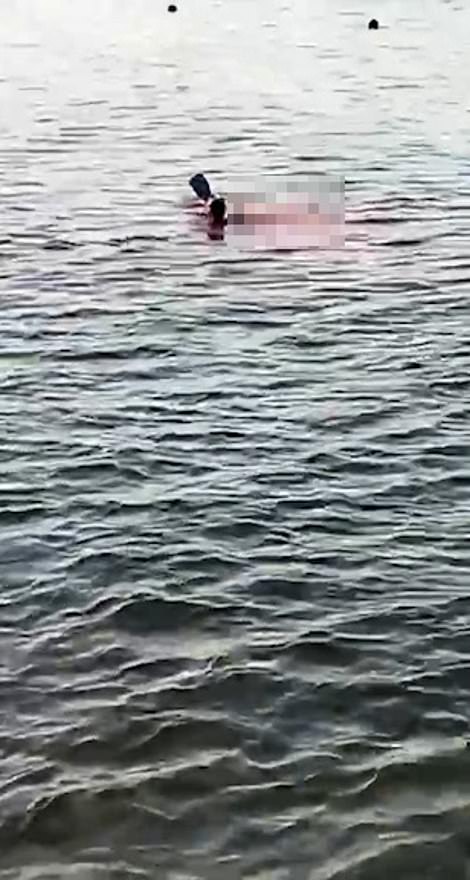 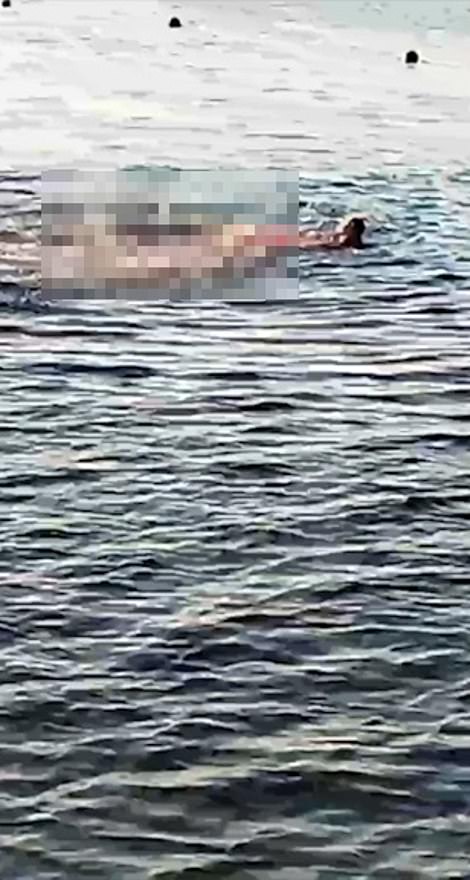 The Austrian tourist was pictured clamouring toward safety as the waters around her turned scarlet red. She used a flipper to make her way back to shore

It said she was walking not far from the beach within the designated bathing when she was attacked and it was still unclear how the shark came so close to her.

What is an Oceanic whitetip shark?

They grow up to 4m in total length with a maximum weight of 168 kg and usually live an age of 22 years.

And are also on the critically endangered list according to Fraser University.

Video shows witnesses on a nearby jetty record the woman’s survival attempt and comment on her predicament.

A group of Russian tourists are heard saying: ‘Where are the rescuers?

‘Life guards? Where are the life guards? She’s going to f***ing die!’

The 68-year-old woman, who lost a leg and an arm, died shortly after being taken to the private Nile Hospital in Hurghada, an Egyptian health official said.

She was barely alive when she was taken in on Friday, the official said, adding that attempts by medical staff to resuscitate her failed.

The official spoke on condition of anonymity because he was not authorised to speak to reporters.

The governor of the Red Sea province closed the area for three days, banning all ‘sea activities’ including diving, snorkelling, wind surfing and kite sailing.

Fishing boats were also banned from the waters off Hurghada. A local report quoted by Russian news agency RIA Novosti added: ‘The woman died in the ambulance from painful shock.’

Reports from news agency AFP and Austrian news outlets point to the attack being committed by a Mako shark while local Egyptian newspapers have named the animal as an Oceanic whitetip shark. 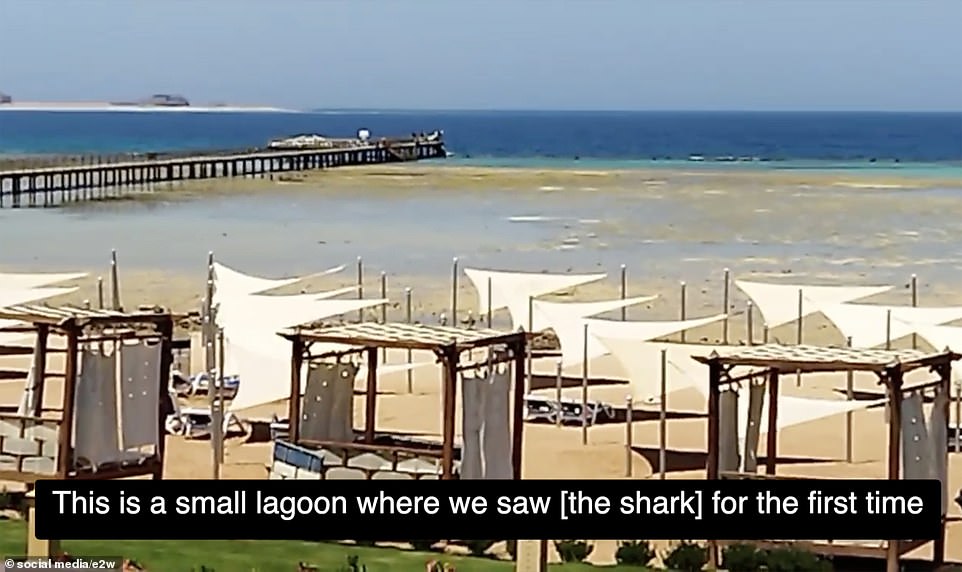 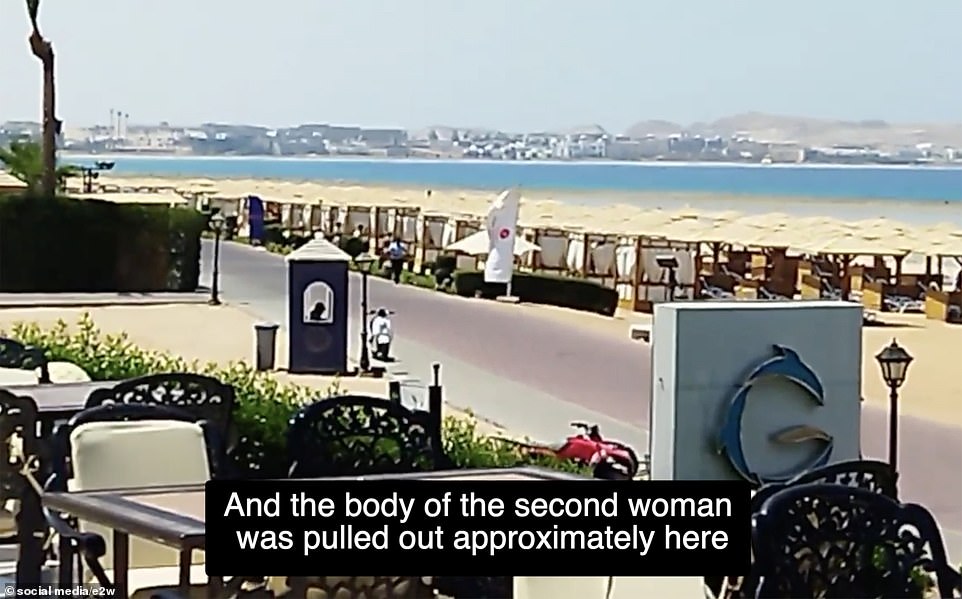 Using his finger to explain, he said: ‘This is a small lagoon where we saw [the shark] for the first time’ 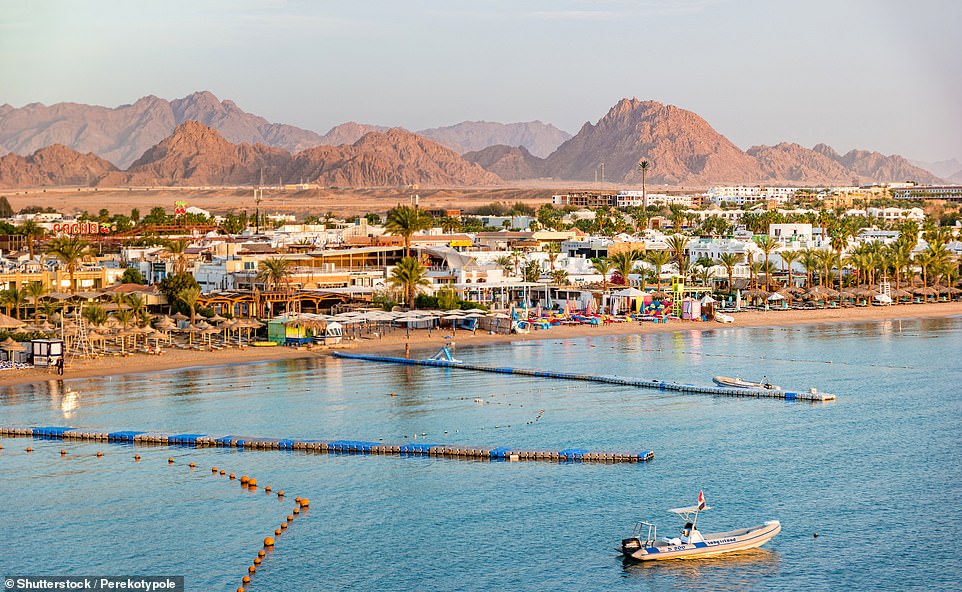 Shark attacks in the Red Sea

In December 2020, a German woman, 42, was savaged by a shark while diving in near Marsa Alam.

In October 2020 a 12-year-old Ukrainian boy on holiday in Egypt and his tour guide lost limbs after an attack by an oceanic whitetip shark.

In August 2018, a 41-year-old Czech tourist died after being attacked 12 miles north of the town of Marsa Alam.

In 2010, five shark attacks took place at Sharm el Sheikh in the same number of days.

The Ministry of Environment announced today that an expert group was investigating the attacks, seen as rare in the area.

The resort is popular with Russian tourists, and remains open to them in contrast to many European destinations despite the war in Ukraine.

‘We ask Russian citizens to remain vigilant when in the water, and strictly follow the bans imposed by the Egyptian authorities on swimming, diving and fishing on the high seas and off the coast,’ tourists were told by their consulate-general in Hurghada.

They were told to ‘strictly observe the signals from hotel employees and the coast guards’.

Shark attacks in Egypt are rare – but the Red Sea has more than 44 species of the fish, some of which can be deadly.

Most common are 6ft-long grey reef sharks, which have 13 or 14 sharp teeth.

They swim in shallow waters around 60m deep or less.

In June 2021, a tandem parasailer, a 37-year-old Jordanian man, was hovering above the water in Aqaba when a shark suddenly emerged and bit his leg.

The man lost part of the back of his foot in the attack which also severed tendons, tore muscles and broke several bones.

In December 2020, a German woman was savaged by a shark while diving in the Red Sea before instructors pulled her away to safety.

The oceanic whitetip shark latched on to the woman, 42, near Marsa Alam in Egypt.

The tourist was taken to hospital where she is recovering in a ‘stable condition’, according to the Governor for the Red Sea Amr Hanafi.

In October 2020 a 12-year-old Ukrainian boy on holiday in Egypt and his tour guide lost limbs after an attack by an oceanic whitetip shark.

The pair needed amputations after the vicious incident at resort Ras Muhammad in the Red Sea.

And in 2010, five shark attacks took place at Sharm el Sheikh in the same number of days.

Three Russians, one Ukrainian and one German tourist were injured.