Home » World News » School bubbles should be scrapped so pupils can go back to class as NO rise in cases, say experts

School bubbles should be scrapped so pupils can go back to class as NO rise in cases, say experts 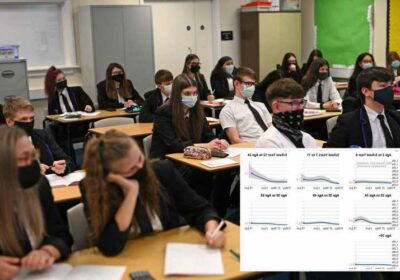 COVID cases have not recently risen in school kids in years 7 to 11, experts of a large infection survey have said.

It backs Govt plans for bubbles to be scrapped in the autumn, after they have caused huge numbers of pupils to self isolate. 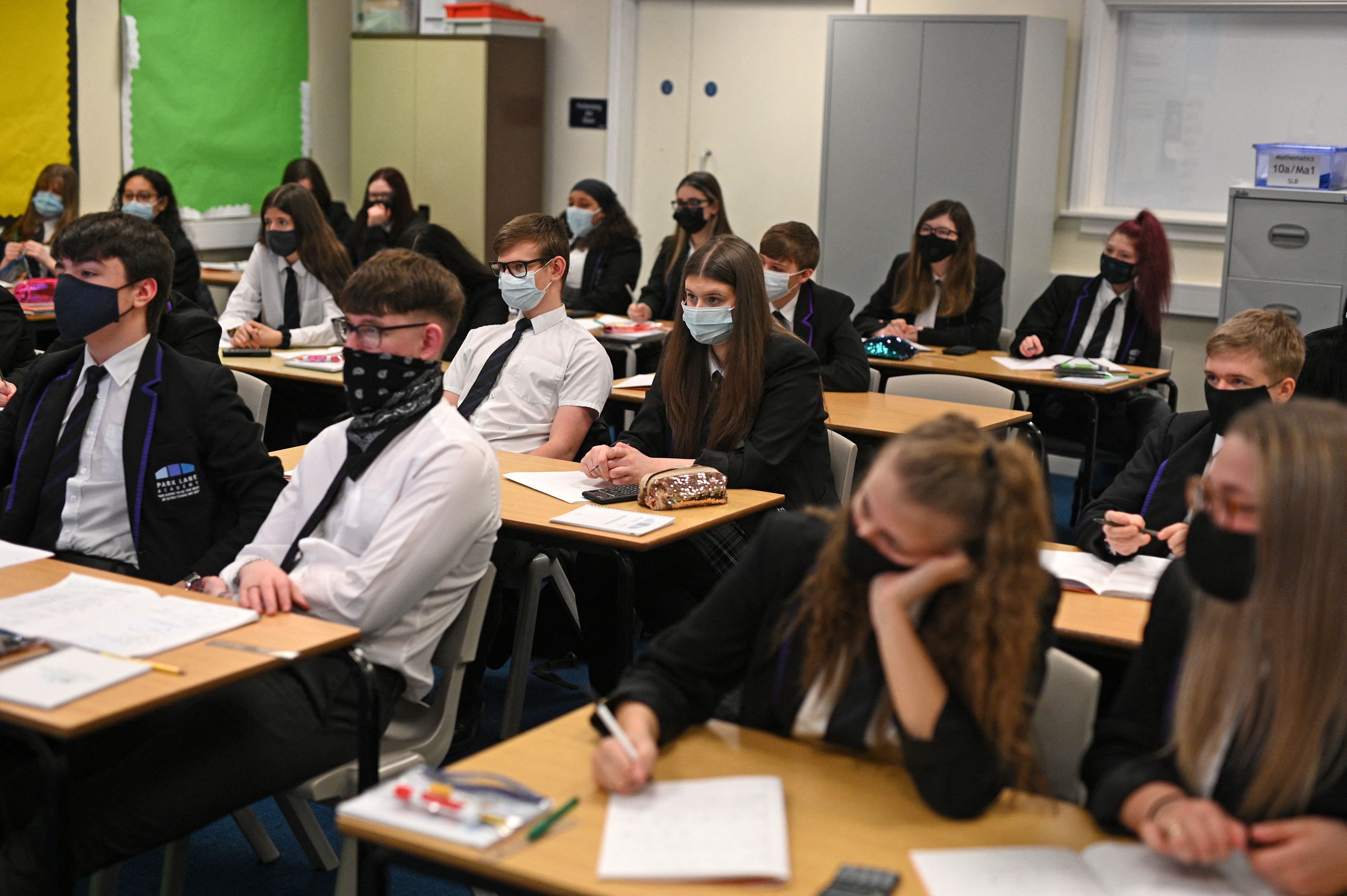 That’s despite the rapid spread of the Delta variant in the UK, impacting unvaccinated groups.

Among secondary school children in years 7 to 11, it is estimated 0.35 per cent would currently test positive for Covid-19.

The figure has remained at around 0.3 per cent since May 23, as Ms Croft said “we haven’t seen any recent increases there”.

Some 0.14 per cent of children aged two to school year 6 are estimated to be infected, a rate which has remained largely unchanged in recent weeks.

However, there are increasing infections in older teenagers and those in their 20s.

In those in years 12 and 13 and young adults up to the age of 24, the ONS estimated that around 0.79 per cent would test positive for Covid-19, a rate that has been rising in recent weeks. 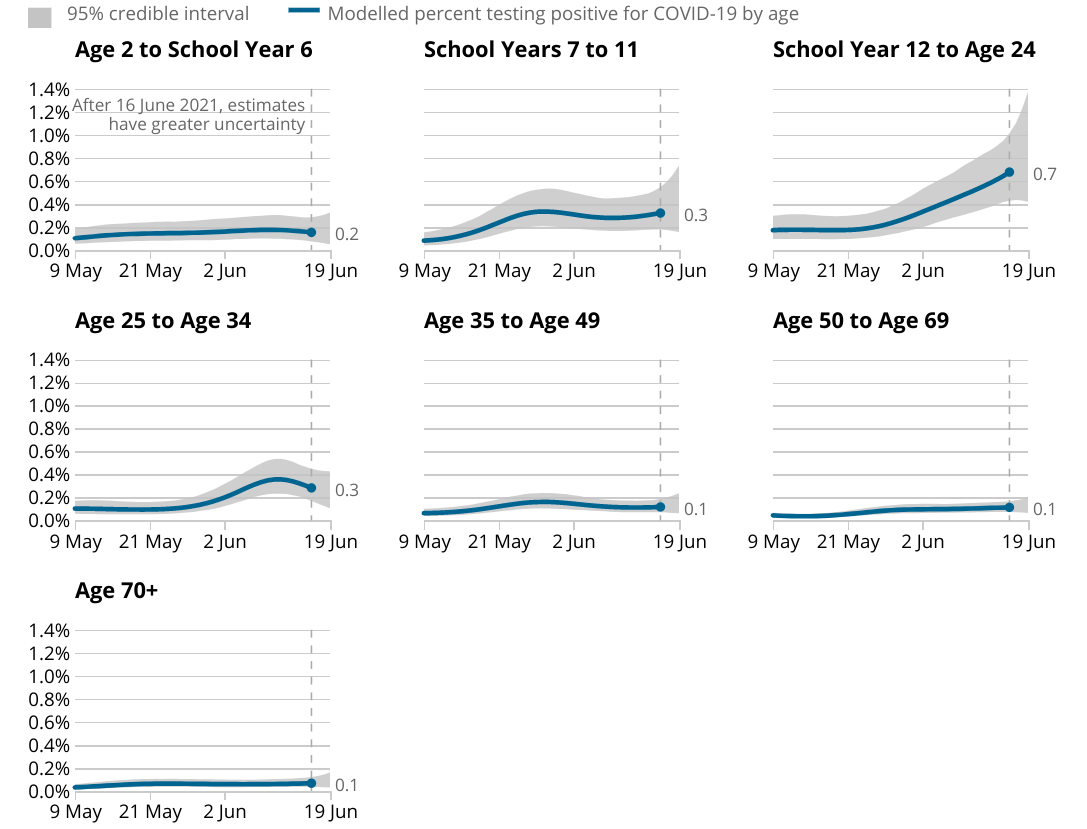 How have case numbers changed in school kids?

The data comes as schools are in chaos with a large fraction of pupils being off for self isolation.

The Department for Education (DfE) estimates that around 3.3 per cent of state school pupils – at least 239,000 children – did not attend class for Covid-related reasons on June 27.

It’s up from 1.2 per cent on June 10 and the highest since schools opened in March.

Steve Chalke, founder of Oasis Schools, said that one in ten children and teens – around 3,000 – were out of school due to coronavirus.

Speaking on BBC Radio 4’s Today programme on Tuesday: “It’s a pretty alarming situation and we would say that something needs to be done about this now.”

He supported lateral flow testing in schools as an alternative to isolation rules – as the Government consider scrapping bubbles.

Currently children have to self-isolate for 10 days if another pupil in their bubble tests positive for coronavirus.

But there are growing concerns about the swathes of children missing classes because they are the contacts of confirmed cases.

The DfE has confirmed today school isolation rules in England could be brought to an end this autumn to avoid high absence rates.

The department said ministers have written to secondary schools asking them to prepare to potentially replace isolation rules with rapid test kits.

A spokesman said: “We are provisionally asking secondary schools and colleges to prepare to offer on-site testing when students return for the new academic year, so that schools are ready in case it is needed to keep as many children as possible in face-to-face education.

“We will provide further details about the approach to protective measures and test and trace in education from September in due course.”

On Monday, Health Secretary Sajid Javid said he has asked for “fresh advice” on the issue, adding that the policy is “having a huge knock-on impact” on children’s education.

“I will hopefully be able to say more on this as soon as possible,” he said.

The Government has been carrying out a review into using testing to end self-isolation for school pupils in bubbles.

He added that a decision will be taken before July 19.

But scientists have expressed their concern with using lateral flow tests as a replacement for self isolation.

The tests – lateral flow tests – are not as accurate as PCR tests that are free on the NHS, but are considered by officials to reduce spread of the virus.

A letter from scientists to Gavin Williamson, Secretary of State for Education, said even if the tests show a negative result, it cannot be relied on and pupils should still isolate.

The group, writing on June 17, said the trials in schools had been “unethical”.

Dame Rachel de Souza said there is an urgent need for children to get back to normal as the have “taken a big burden” for the rest of society, considering they are at lowest risk of Covid.

She told The Telegraph: “The experience of lockdown has been a real trauma, and I think we shouldn’t underestimate it.

“Children are really troubled, and it’s right across the board.”

The shakeup schools comes after officials suggested children will not be getting Covid vaccines.

International Trade Secretary Liz Truss told BBC Breakfast on June 16 that vaccination experts are not planning to give the green light for jabs in children.

But The Joint Committee on Vaccination and Immunisation (JCVI) are yet to announce their decision on whether under 18s should be able to get vaccines or not.