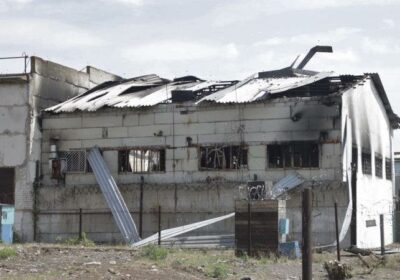 Odesa: Dozens of Ukrainian prisoners of war appeared to have been killed when a prison building was destroyed in a missile strike, with Moscow and Kyiv accusing each other of carrying out the attack.

The deaths, some of which were confirmed by Reuters journalists at the prison where the men were held, overshadowed UN-backed efforts to restart shipping grain from Ukraine and ease a looming global hunger crisis. 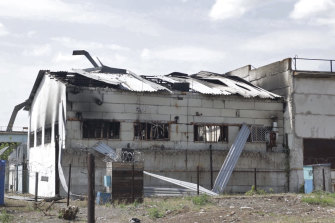 In this photo taken from video a view of a destroyed barrack at a prison in Olenivka, in an area controlled by Russian-backed separatist forces.Credit:AP

Russia’s defence ministry said 40 prisoners were killed and 75 wounded in the attack on the prison, in the frontline town of Olenivka, in a part of Donetsk province held by separatists.

A spokesman for the separatists put the death toll at 53 and accused Kyiv of targeting the prison with US-made HIMARS rockets. The ministry also said HIMARS rockets were to blame, Russian news agencies reported.

Ukraine’s armed forces denied carrying out the strike, saying Russian artillery had targeted the prison to hide the mistreatment of those held there. Foreign Minister Dmytro Kuleba said Russia had committed a war crime and called for international condemnation.

Reuters TV showed the remains of a cavernous burned-out building filled with metal beds, some with charred bodies lying on them while other bodies were lined up on military stretchers or on the ground outside. 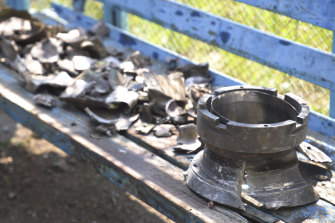 Investigators put fragments on display of what they say were rickets fired from US-supplied HIMARS systems near a destroyed barrack at a prison in Olenivka.Credit:AP

The Russian defence ministry said that the prison housed Ukrainian POWs and that eight prison staff were also wounded. Russian-backed separatist leader Denis Pushilin was quoted as saying there were no foreigners among the 193 detainees.

Ukraine has accused Russia of atrocities and brutality against civilians during since its February 24 invasion and said it has identified more than 10,000 possible war crimes. Russia denies targeting civilians.

Ukraine’s military intelligence said Thursday’s prison strike was a “deliberate act of terrorism”. The domestic security agency said it had intercepted phone calls which point to Russia being responsible.

“In this way, the Russian occupiers pursued their criminal goals – to accuse Ukraine of committing ‘war crimes’, as well as to hide the torture of prisoners and executions,” it said.

Russia has denied involvement in war crimes, accused Kyiv of staging them to smear its forces and said it is investigating Ukrainian war crimes.

A spokesman for the Moscow-backed separatists told journalists in Olenivka that Ukraine had attacked after the prisoners of war had begun talking about crimes conducted by the Ukrainian military.

“The political leadership of Ukraine decided to use US-produced multiple-launch rocket systems HIMARS to carry out a strike here to veil the crimes that the Ukrainian captives started talking about,” spokesman Eduard Basturin said.

There was no way to immediately verify either of the two versions of events.

Separately, Ukraine said at least five people had been killed and seven wounded in a Russian missile strike on the southeastern city of Mykolaiv, a river port just off the Black Sea, as Russia fired across frontlines in eastern and southern Ukraine.