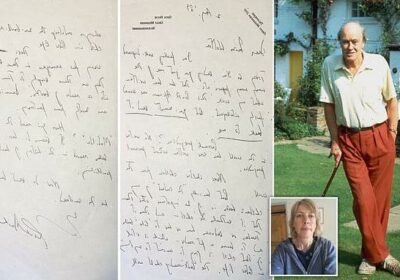 Roald Dahl’s marvellous medicine for a good story? ‘Never shelter children from the world’: How author revealed his secret to writing bestselling books just one year before he died in charming handwritten letter to adoring fan

A charming handwritten letter penned by Roald Dahl to an adoring fan the year before he died saying to ‘never shelter children from the world’ and revealing his secret to writing bestselling books has gone under the hammer.

The iconic children’s author replied to student Christine Wotton in 1989 after she found his address in the back of an old library book while she was at university.

The fascinating letter gives a rare insight into the novelist’s opinion of his own books and his determination to get children reading.

In the handwritten note, Dahl – considered one of the world’s best storytellers – frankly admits his work had ‘very few messages’ and was ‘mostly pure fantasy’.

He wrote in the letter, dated August 2, 1989: ‘Never shelter children from the world. 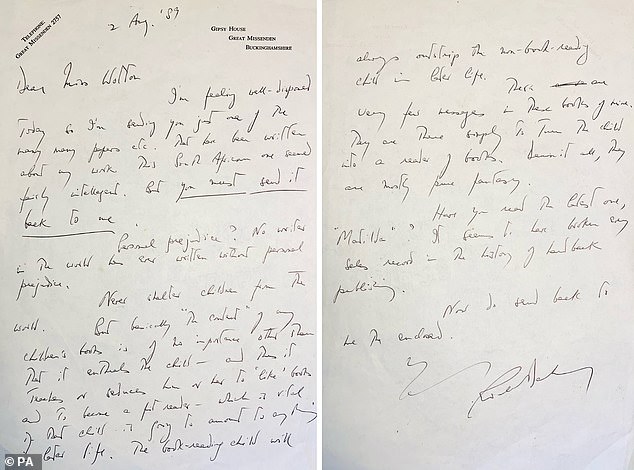 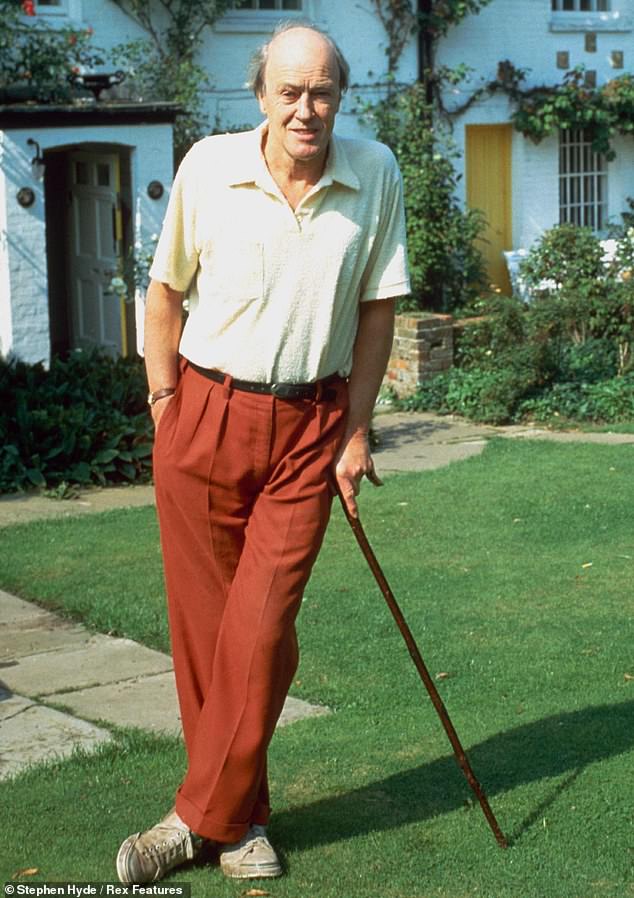 In the handwritten note, dated August 2, 1989, Dahl – considered one of the world’s best storytellers – says: ‘Never shelter children from the world’

‘The “content” of any children’s book is of no importance other than that it enthrals the child – and thus it teaches or seduces him or her to ‘like’ books and to become a fit reader – which is vital if that child is going to amount to anything in later life.

‘They are there simply to turn the child into a reader of books. Damn it all, they are mostly pure fantasy.

‘Have you read the latest one, Matilda? It seems to have broken every sales record in the history of hardback publishing.’

Dahl, who wrote classics such as Matilda, Charlie and the Chocolate Factory, The Witches, The BFG and The Twits, died just over a year later on November 23, 1990.

Ms Wootton, from Chagford, Devon, said she wrote to Dahl as part of her dissertation but never expected a reply – let alone such a passionate response.

The librarian and housekeeper said: ‘I wrote to Roald Dahl speculatively as a young student, aged 20.

‘I was writing a dissertation on his work for my BA Hons degree in Literature and Linguistics at Portsmouth Polytechnic in the late 1980s.

‘I was staging a mini rebellion by focusing on controversial elements, ie violence, of Dahl’s books for children, as fellow students opted for a serious approach to the likes of Kafka, Shakespeare and Homer.

‘I stumbled across Dahl’s address listed in the back of an old library book.. Security was clearly rather more relaxed in those days. 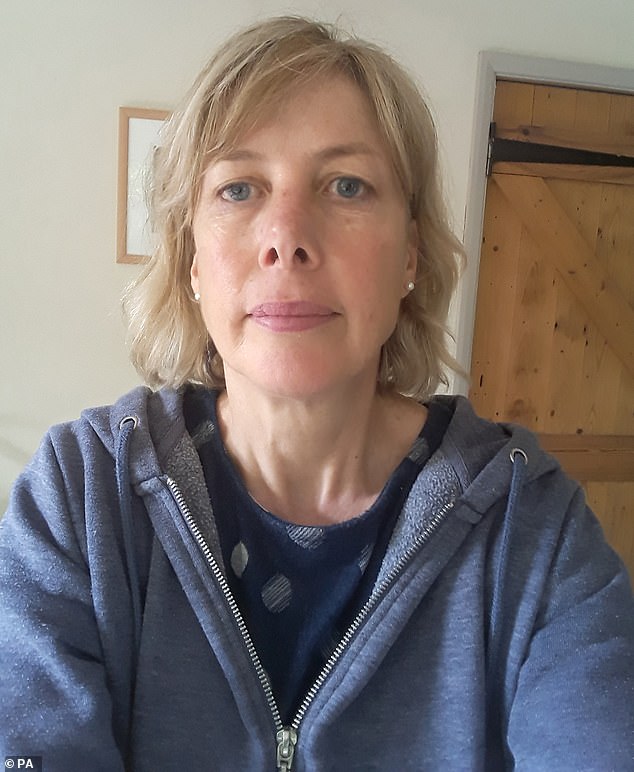 Ms Wotton (above), from Chagford, Devon, said she wrote to Dahl as part of her dissertation but never expected a reply – let alone such a passionate response

‘On a whim I asked him questions which intrigued me regarding his style and attitude towards children’s literature, never really dreaming of a response.

‘So, I was amazed to receive a chatty double-sided, handwritten A4 reply, plus another dissertation which he lent me, presumably written in his famous garden shed, discussing the importance of reading for children and referring to his newly published book Matilda, now a movie and West End musical.

‘As he indicated himself, it was unusual for him to reply to letters like mine, so I really struck lucky.

‘With the happy-go-lucky optimism of youth, I don’t think I fully appreciated my good fortune.

‘I’ve enjoyed and treasured the letter for over 30 years and the time has come to share it, for others to read and enjoy his wise words which are dashed off in his wonderfully inimitable, flamboyant style.’

The note was discovered by Jim Spencer, head of books and works on paper at Hansons Auctioneers, when it was posted to the firm’s saleroom in Staffordshire. 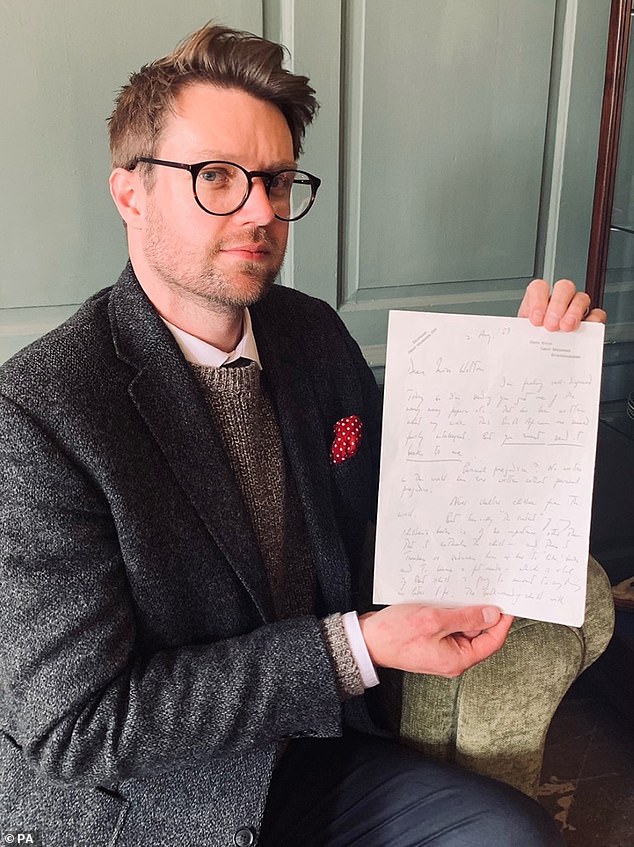 Jim Spencer, head of books and works on paper at Hansons Auctioneers, with the handwritten note. He said: ‘It’s difficult to predict what a unique piece like this will do at auction’

Jim said: ‘This is important. It’s unusual to see such conversational correspondence from a big name like this.

‘Most autograph letters that come up for sale are typed, brief, almost generic responses.

‘This is quite different, it gives us an insight into Dahl’s creativity and craft, his passion for making reading fun, encouraging children to pick up books and take a love of literature with them throughout the rest of their lives.

‘Interestingly, he shared his valuable opinion the year before he passed away at the age of 74 in November 1990.

‘It’s difficult to predict what a unique piece like this will do at auction.

‘I’m guiding the letter at £500 to £800, but it could easily spark a fierce bidding battle and run away for much, much more.’

The letter will be sold by Hansons Auctioneers in their specialist Library Auction at Bishton Hall, Staffordshire, on June 15.