Rail union bosses moan that Banksy’s £7.5m Tube graffiti stunt proves London Underground ‘is not safe’ as TFL refuses to release details of its investigation for fear of copycats

Rail union bosses have claimed Banksy’s £7.5million Tube graffiti stunt proves the London Underground ‘is not safe,’ as TfL refuses to share which station the artist targeted along with other details, as it fears copycats will target trains.

The renowned street artist boarded a Hammersmith and City Line train dressed in a high-vis jacket, boiler suit, goggles and face mask on July 10, spray painting rats in pandemic-inspired poses inside the carriage and on a platform’s wall.

It was removed by clueless Transport for London cleaning crews, who were unaware of its origins despite the Bristol-based artist sharing a video of the artwork on his Instagram page.

The RMT has raised security concerns three months after the stunt, while TfL has revealed it will not publish the findings of an investigation into how Banksy was able to pull it off. 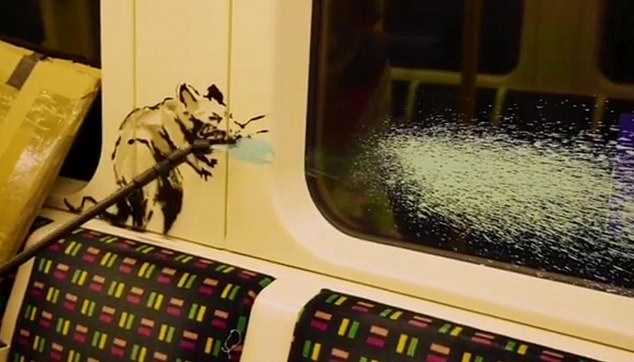 Banksy’s artwork on the London Underground was valued at around £7.5million – but clueless cleaners removed it from the Hammersmith and City Line train before it could be preserved

The public transport operator would not reveal the name of station that was targeted, but told the BBC it was between Barbican and Paddington.

TfL also confirmed the artist did not go on the station’s tracks.

Rail union RMT is warning that Banksy’s video from July exposes a lack of staff and security at some Underground locations.

A spokesperson from the union told the BBC a lack of staff on gates means the public could ‘literally walk on with anything they like’. 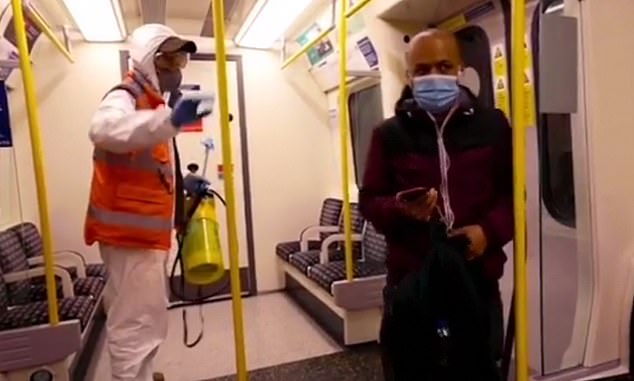 Transport for London has refused to name the station Banksy used as his canvas, and said an internal investigation into the stunt, which saw the artist board a train in high-vis jacket, boiler suit, goggles and face mask, would remain private 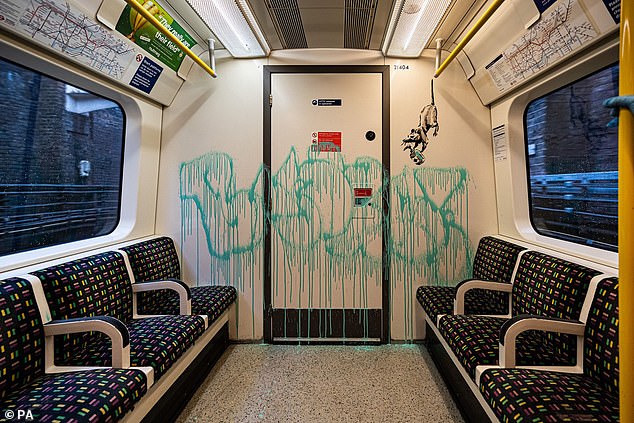 Rail union RMT claims Banksy’s stunt, which happened between Barbican and Paddington stations, exposes safety concerns on the Underground, as a spokesperson warned ‘you can have a coffin under your arm, let alone a canister full of paint’ 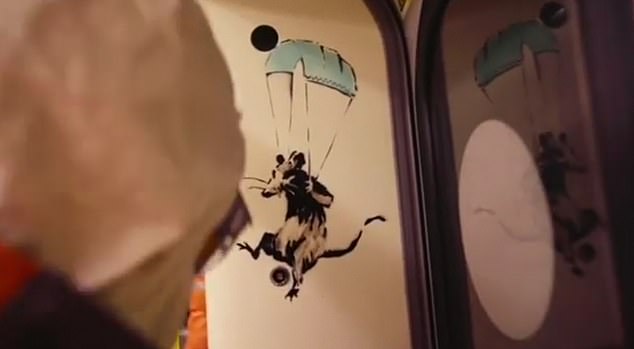 The piece, named ‘If you don’t mask – you don’t get’, was meant to encourage Britons to wear masks to halt the spread of Covid-19 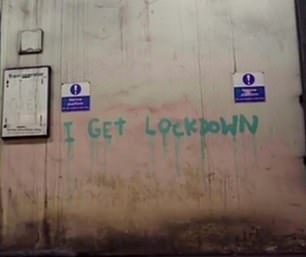 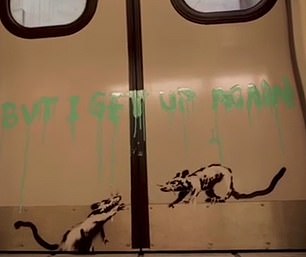 It ended with the message: ‘I get locked down – but I get up again’ – a play on words on the Chumbawamba hit. Despite painting on the wall (left), TfL has confirmed Banksy did not step on the tracks

They added: ‘You can have a coffin under your arm let alone a canister full of paint,’ he said.

‘What happened with a canister full of paint is actually very minor, considering what could have happened.’

A message on the operators website reads: ‘We fund more than 2,500 officers across the Metropolitan Police Service, British Transport Police and the City of London Police (CoLP).

‘They police London’s transport network to tackle crime and antisocial behaviour, and make you feel safer when travelling in London.’ 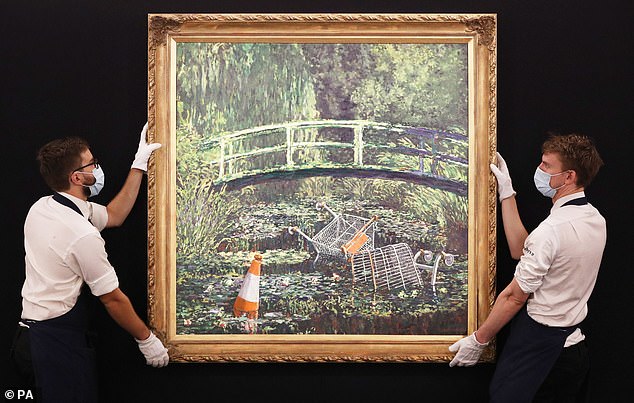 News of Banksy’s stunt comes after another of his works, Show Me the Monet (pictured) sold for £7.6million at auction – the second highest sale of the artist’s work

Concerns raised over Banksy’s stunt come after one of his most famous paintings, Show Me The Money, fetched £7.6million at auction.

The price achieved by Sotheby’s for Show Me the Monet is the second highest yet for the mysterious British artist.

Five collectors pushed the winning bid to £7,551,600 against an expectation of between £3.5-5million.

Created in 2005, the painting transforms Monet’s A Bridge Over a Pond of Water Lilies into a fly-tipping spot, adding abandoned shopping trolleys and a traffic cone to the famous garden scene. 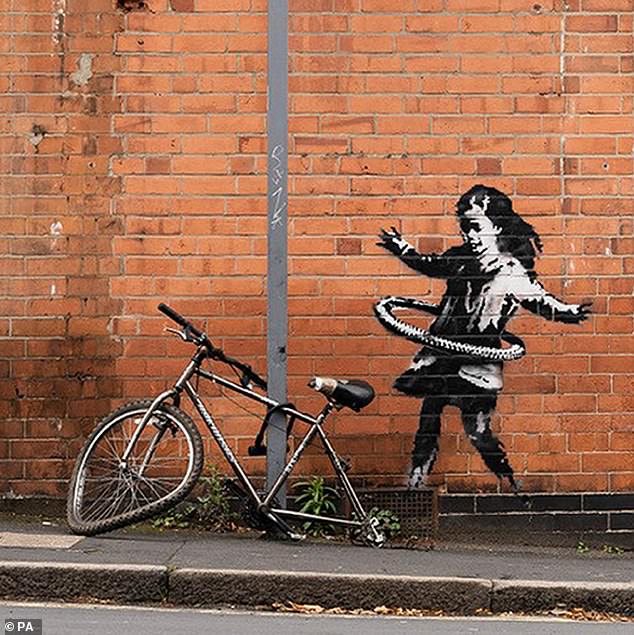 Street artist Banksy has confirmed that he is the artist behind a  black and white, the tongue-in-cheek image  of a girl hula hooping with a bike tyre, which sits just behind a battered bike chained to a lamp post with an infinity lock

Last Tuesday a black and white stencil over a girl using a bike wheel as a hula hoop appeared on a wall outside a Nottingham beauty salon.

The wall mural, which is painted behind a chained up bike in the road, is worth more than the street’s average house price of £214,280.

Tonight another of Banksy’s works, Oh My God, will go up for auction, with valuers predicting it could sell for up to £1million. 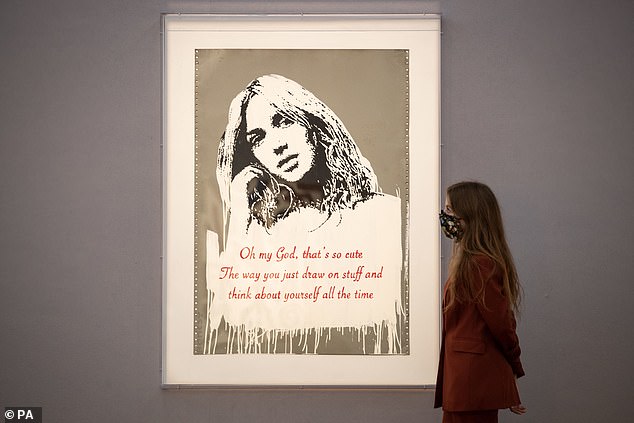 Oh My God, by Banksy, is expected to fetch between £700,000 and £1million when it goes up for auction at Bonhams in London on Thursday

It features the wording: ‘Oh my God, that’s so cute. The way you just draw on stuff and think about yourself all the time’, and is accompanied by a certificate of authenticity issued by the so-called Pest Control Office.

The artwork, which was spray painted on a piece of found metal, is said to take inspiration from Girl with a Pearl Earring, and first appeared at his seminal Barely Legal exhibition in Los Angeles in 2006.

Who is Banksy? Experts believe guerilla artist is middle-class boy from Bristol or could even a group led by Massive Attack star 3D

Insiders in the art world have previously claimed there is compelling evidence suggesting that the artist is former public schoolboy Robin Gunningham, from Bristol, who is believed to be in his early forties.

In March scientists at Queen Mary University of London backed a Mail on Sunday identifying Mr Gunningham as ‘the only serious suspect’.

They used ‘geographic profiling’, a technique more often used to catch criminals or track outbreaks of disease, by plotting the locations of 192 of Banksy’s presumed artworks.  But there have always been doubts. 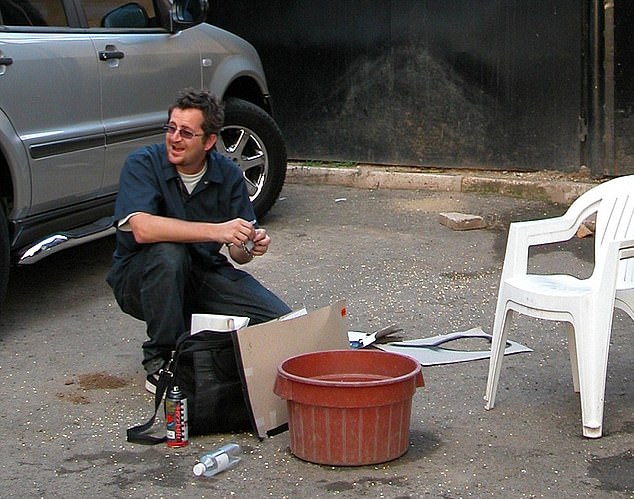 Is this him? The only clue until now has been a photograph taken in Jamaica 11 years ago of a man with a bag of spray cans and a stencil by his feet, who people say is Robin Gunningham

Others have claimed Banksy is older, having been inspired by French artist Blek le Rat, who began working in 1981, which could make him at least ten years older.

The only clue until now has been a photograph taken in Jamaica 11 years ago of a man with a bag of spray cans and a stencil by his feet, who people say is Gunningham.

Banksy has admitted he disguises himself when in public and claims it is much easier and quicker to install works himself.

Appearances in public, or on film, have also been in disguise or with his face covered. Banksy says he must remain anonymous because of the often illegal nature of his art.

Robin Gunningham, who is thought to be in his late 30s or early 40s, remains the man most believed to be Banksy, although only a handful of the artist’s friends know his true identity.

He was educated at the £9,240-a-year Bristol Cathedral School, which shocked some of the artist’s fans who were fond of their hero’s ‘anti-establishment’ stance. 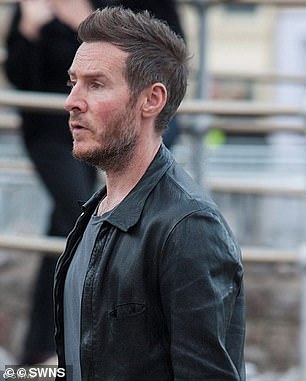 Is it him? Massive Attack star Robert Del Naja, pictured arriving at Banksy’s Dismaland in Weston-Super-Mare, has also been accused of being the guerrilla graffiti star

Banksy has become renowned for his use of stencils to spray illegal images on public walls. Some councils and businesses have begun to protect his creations and his works have been sold to celebrities, including Angelina Jolie and Brad Pitt.

Rumours have persisted that the artist is called Robin Banks, that he is from Bristol, and that his parents think he is a painter and decorator.

Gunningham’s former school friend Scott Nurse said in 2011: ‘He was one of three people in my year who were extremely talented at art. I am not at all surprised if he is Banksy.’

Records reveal Gunningham once lived with artist Luke Egan, who later exhibited with Banksy. Mr Egan initially denied knowing Gunningham but later admitted he had lived with him.

Around 2000, when Banksy moved to London, Gunningham relocated to a flat in Hackney. A number of Banksy’s most famous works have appeared nearby. At that time Gunningham lived with Jamie Eastman, who worked for the Hombre record label – which has used illustrations by Banksy.

Mr Gunningham’s own parents have denied the artist was their son, although when his mother Pamela was shown the picture by the Mail on Sunday four years ago she initially denied she even had a son, let alone one called Robin, according to the paper.

But in 2016 a member of Massive Attack was named as the artist.

Robert ‘3D’ Del Naja, the founding member of the Bristol band, has been accused of being the guerrilla graffiti star because art keeps appearing near their gigs.

Investigative journalist Craig Williams, 31, claims the artist could be Mr Del Naja, or perhaps a team of people led by him and linked to Massive Attack who combine their concerts with graffiti.

Mr Williams has plotted Banksy murals around the world and said that on at least six occasions more than a dozen appeared shortly before or after Massive Attack gigs in the same cities over the past 12 years.

3D was a graffiti artist in the 1980s and has admitted he is friends with Banksy – but the journalist’s new research concludes he may be the artist himself.   His band, famous for songs Tear Drop and Unfinished Sympathy, has made millions while Banksy’s art sells for at least £500,000 a piece.

Mr Williams said it has been the common conception was that the artist was ‘plain old public school boy Robin Gunningham’. He said: ‘But what if Banksy isn’t the one person everyone thinks he is. What if Banksy is a group of people who have stencilling different locations both at home and abroad? Such a rich body of work done over a decade, across the globe, may allow for the suggestion.

‘A rumour exists from 2010 that his work that went up around North America was his work but were not necessarily painted by him, but rather by a street team that happened to be following the Massive Attack tour. And on analysis of his North American work, this makes perfect sense.’