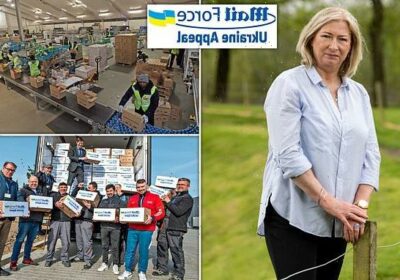 It was the song’s opening line that moved Lorri Hales to tears that sunny day before Easter, as she and her partner Steve drove home from a visit to see their grandchildren.

‘The children were self-isolating because of Covid, so we couldn’t go in and see them, so because I was feeling a bit down on the way back, Steve decided to put some music on in the car,’ Lorri says now, sitting in her kitchen with rescue dog Tia sleeping by her feet.

‘It was a track I hadn’t listened to before and I just heard the words, “Take the children and yourself and hide out in the cellar,” and it made me cry because I instantly thought, “That’s Ukraine. This song could have been made for Ukraine.” And I knew we had to do something with it.’

The song in question was an unreleased acoustic version of the hit Mike and The Mechanics song Silent Running, performed by the Scottish musician and songwriter BA Robertson, who co-wrote the track. Penned back in 1985, the lyrics are nevertheless hauntingly prescient, evoking a family barricading themselves against a war raging outside, and a country desperately calling out for help.

Two months on, that acoustic version of Silent Running by BA Robertson will be released today as a charity single. 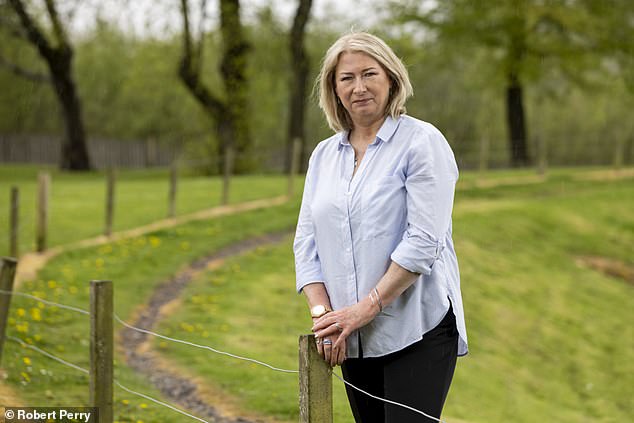 Lorri Hales (pictured) near her home at Gartloch. Lorri heard the song and came up with the idea.’Song for Ukraine’ currently in the works, a re-recording of the Mike and Mechanics song Still Running sung by BA Robertson, who wrote the original version 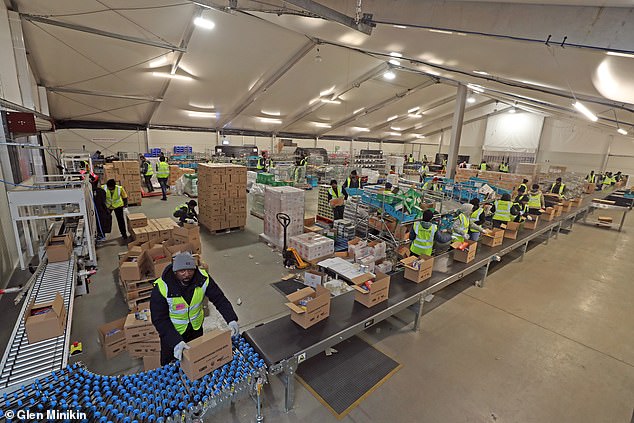 It will be available on all major digital platforms including iTunes, Amazon and Spotify. All proceeds will go to Mail Force’s Ukraine Appeal, which, thanks to the incredible generosity of Daily Mail and Mail on Sunday readers, has so far raised more than £13million for Ukraine.

No one is more surprised than BA himself (his full name is Brian Alexander but he always goes by BA), a titan of the song writing world whose credits vary from Cliff Richard’s Wired for Sound to Mike and The Mechanics’ huge number one hit The Living Years.

‘I don’t listen much to my own tracks – don’t have myself on shuffle,’ the usually reclusive songwriter told the Mail. ‘I had forgotten about this performance so it was easy to say, “Let’s do it”.’

That Lorri’s partner Steve even had the track to play in the car that day was sheer coincidence. An old friend of BA and former manager of the band Runrig who, as he describes it, ‘helps BA out with bits and pieces’, Steve had recently got a new phone with a bigger memory, and had downloaded a few new playlists he had made up from his vast music library.

‘I have a real love of live music and BA had performed this particular track in Edinburgh back in 2004, so I just dropped it into the playlist without really thinking about it. But then when it came on and I saw Lorri’s reaction, I thought, “Wow”.’

The pair parked outside a supermarket and through her tears, 63-year old-Lorri told her partner of 12 years in no uncertain terms that he had to phone BA and persuade him to release it for charity.

‘He said, “OK, I’ll phone him, but you need to get out the car first, I don’t want you heckling him”,’ she says. ‘By the time I’d got back from the shops BA had agreed. And I’m so glad. Because when you hear it, it’s absolutely straight from the heart.’ 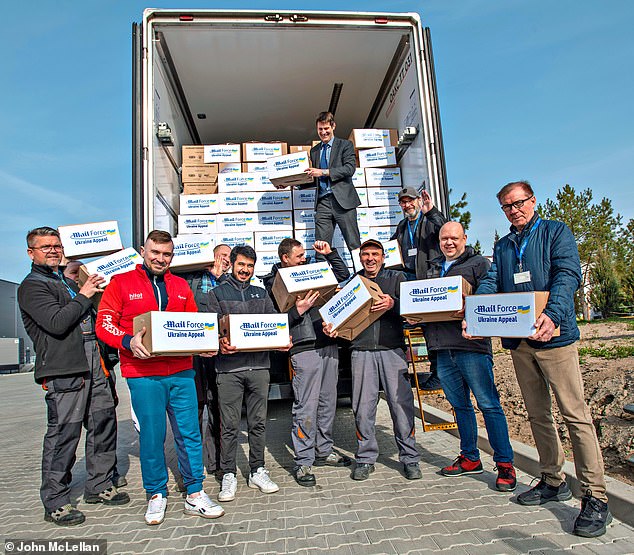 Part of the song’s beauty lies in its simplicity. It was recorded at the Gilded Balloon in Edinburgh during the 2004 festival at one of BA’s rare live gigs, and unlike the original version of Silent Running, which is a heavy track with a strong beat, laden with synths, this one features just BA and a piano. The result is both melancholy and moving, particularly when he reaches the chorus, and the plaintive lines ‘can you hear me calling you?’

‘That made me think of President Zelenskyy asking the world to help,’ says Lorri.

‘Then there is a line that runs, “There’s a gun and ammunition just inside the doorway, use it only in emergency”.

‘Just a few days before I’d seen a Ukrainian woman with her two children on the news being interviewed in her kitchen and she was saying, “These are the children’s grab bags, if they have to run and hide in the cellar”, and then she said, “This is my gun”.

‘It was sitting on the kitchen table quite casually. This was a woman, a mother, willing to fight and die for her country and protect her children. It really resonated with me. And it seemed like the song was telling her story.’ But while Lorri sees the Ukrainian struggle against Russia in the lyrics, BA is less clear about their meaning, preferring to leave it up to the individual listener.

‘I don’t really like to analyse my work,’ he says.

‘Often it can just be an immaculate stumble, written in haste, on a deadline. There was a lyric I wrote before this one, with a different title, on a different subject. I wrote this lyric on a single sheet of paper, with an extra verse that we didn’t use. It’s one of my favourite Mechanics songs.’

BA Robertson is one of Scotland’s greatest songwriters, yet for most of the past two decades he has chosen to stay out of the limelight, so much so that he hardly ever gives interviews (his comments to the Mail about the song are a rare exception) and has not performed publicly since 2010.

‘He shies away from the public eye,’ says Steve. ‘BA consciously made a decision many years ago not to perform but to write instead. He has deliberately avoided the limelight, and that’s his choice. It was a bit of a sea-change to get him to agree to do this but when I conveyed to him the impact it had on Lorri he said, “Well if it’s that important, let’s do it”.’

Some may remember BA as the writer of the 1982 Scotland World Cup song, We Have a Dream, or from his hits Kool in the Kaftan and Bang Bang.

The lyrics behind Silent Running:

Take the children and yourself

And hide out in the cellar

By now the fighting will be close at hand

Don’t believe the church and state

And everything they tell you

Believe in me, I’m with the high command

There’s a gun and ammunition Just inside the doorway

Use it only in emergency

Better you should pray to God The Father and the Spirit

Will guide you and protect from up here

Swear allegiance to the flag

Whatever flag they offer

Never hint at what you really feel

For some day sons and daughters

Will rise up and fight while we stood still

BY BA ROBERTSON AND MIKE RUTHERFORD

In the early 1980s he was a regular face on television, once guesting as a presenter on Top of the Pops, appearing on shows such as Saturday Swap Shop and Cheggers Plays Pop, and even making an appearance as Bob Cratchit in a Kenny Everett Christmas Carol special. What is less known is his more serious work, including the time he spent in the Nineties living in Los Angeles and working as a music producer in the Walt Disney Studio, before moving to Ireland and finally back to Scotland.

Indeed, so well connected is he that it was BA’s Hollywood connections that gave Tim Rice and Elton John the chance to work on the Lion King soundtrack.

‘To understand BA, you need to know that his desire was to be a writer,’ says Steve.

‘And when you dig into what he’s written, it is a far more interesting and valued contribution to music than, as he calls them, his cartoon pop songs.’

Then there is the brace of Mike and The Mechanics songs, the most famous of them all the achingly beautiful The Living Years, which was co-written by BA about the death of his own father. It was a huge hit, soaring to number one in the US in 1989 and winning an Ivor Novello award in Britain for best song.

The song opened doors for BA in America, and before long he found himself working alongside legends such as Burt Bacharach and John Barry.

‘If you don’t have a hit then you don’t get to go on and do the other stuff. I would never have got in the same room as these people if I hadn’t had The Living Years – it becomes your calling card,’ he said once.

But the Hollywood life ultimately did not suit him, and now the 71-year-old lives in quiet and happy seclusion back home in Scotland. The war in Ukraine, however, has forced him out of retirement, and he says that he is incensed by what is happening there. ‘It’s a war propagated by a pensioner,’ he says.

‘Putin, Lavrov, Lukashenko don’t care what the world looks like in 20 years.’

Releasing Silent Running then, with all its profits going to aid the Mail Force Appeal, is a way to give back.

Says Lorri: ‘I really wanted to do something and there’s a real feeling of being impotent in a situation where you want to help. This felt like a tangible way to do that.

‘I would love for people everywhere to hear the song and stop and think about it.

‘It’s so obviously topical, it really is a song for Ukraine. So if people can spread the word, download it and listen, just do as much as they can and make as much money for the charity as possible, that would be wonderful.’

BA says that he hopes people take the message from the song that family is, perhaps, the most important thing in life.

‘When I wrote it, my wife was pregnant with our first child, my father close to dying,’ he says.

‘He died before that child was born – one leaves, one arrives. My family experience in a civilised world is what tens of thousands are suffering under the most horrific circumstances every day.

‘Like the guy in the song, they want to protect the things they love. If no one is listening there is little they can do, but there is a longing to try.’

Silent Running will be available to download on all major digital platforms including iTunes, Amazon and Spotify from today.

The video is also available here.