RACE hate killer Zeeshan ‘Crazy’ Shahid’s mum blew kisses at him earlier after the fiend was let out of jail to visit her.

The handcuffed lifer — who murdered Kriss Donald, 15 — enjoyed a cosy family reunion in Lanarkshire, weeks after being barred from his dad’s funeral. 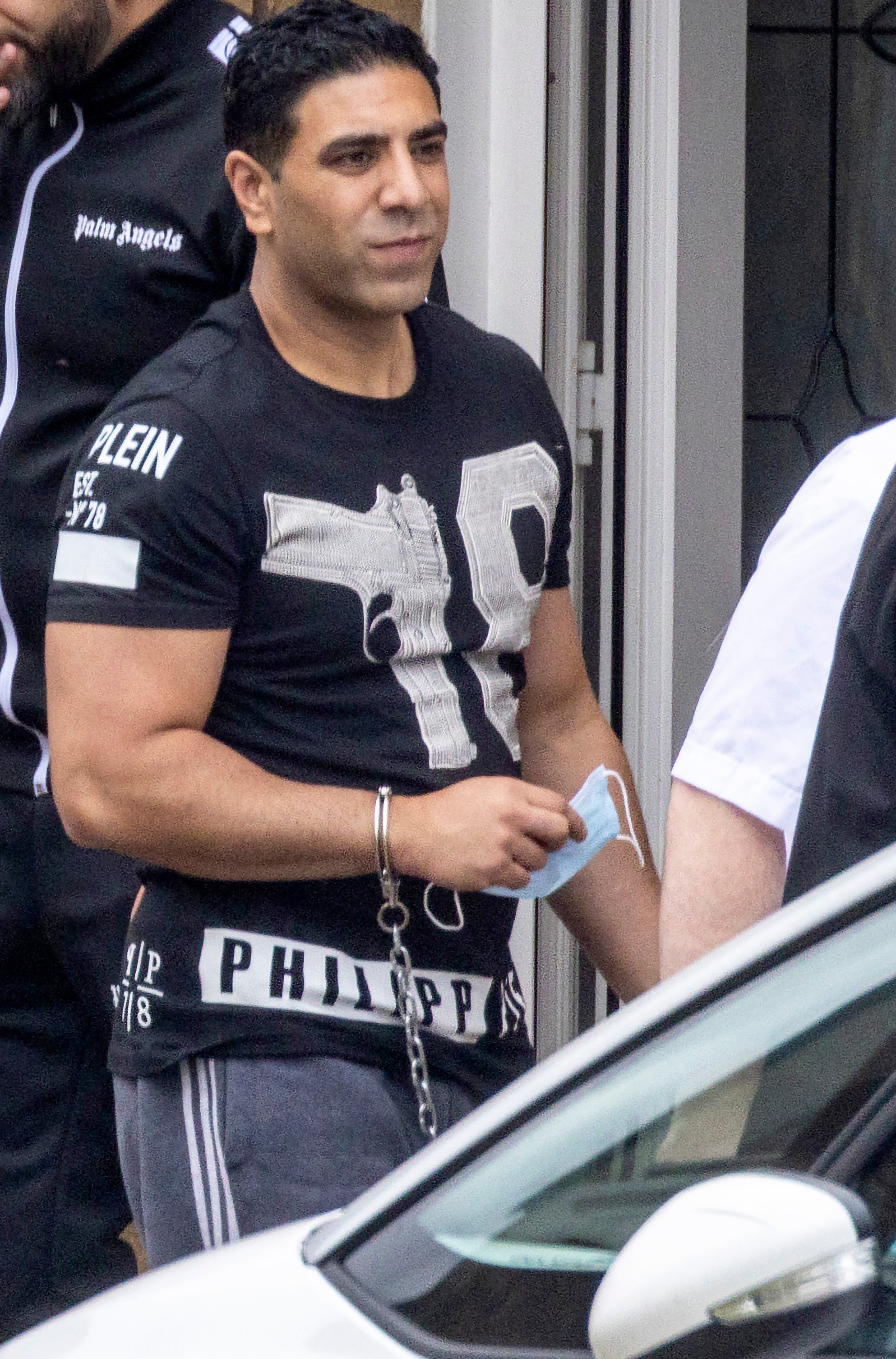 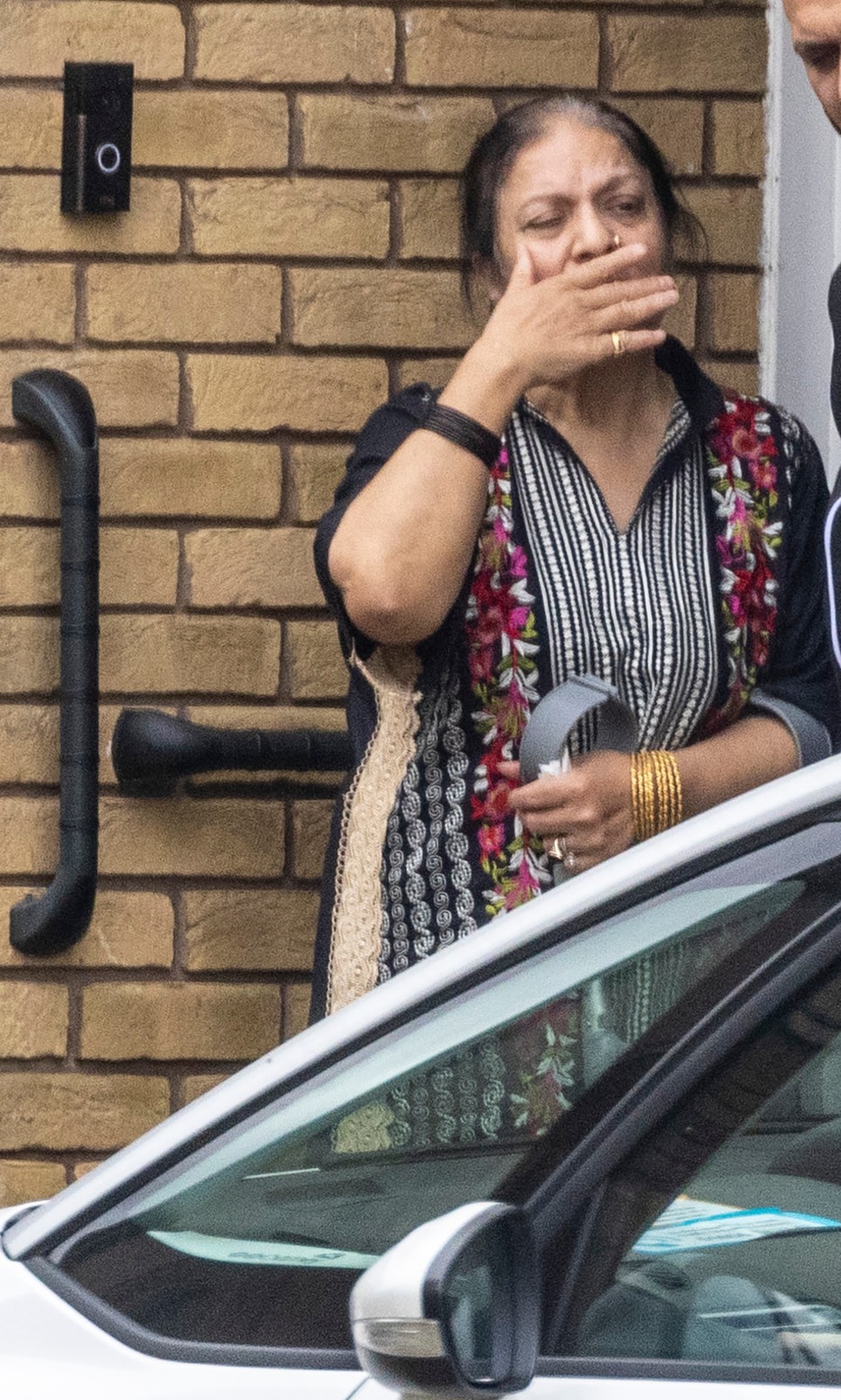 The evil killer was packed off back to jail clutching his mum’s home-made treats after the cosy family visit.

The race hate murderer, 43, was allowed out of prison to spend time with loved ones — and our exclusive photos show how Qudsia Shahid, 70, sent her monster son back to HMP Dumfries clutching a box of goodies.

Well-built Zeeshan, looking fit and healthy and wearing a T-shirt with a sinister gun logo, was escorted by three prison guards.

The lifer, who is serving 23 years for the barbaric murder of Kriss Donald, 15, with sibling Imran ‘Baldy’ Shahid, was handcuffed to minders during his reunion at the family home in Lanarkshire.

Thug Shahid — pictured for the first time since his conviction in 2006 —spent at least two hours inside the £250,000 pad with relatives after being granted special permission from jail bosses.

As the killer — wearing a facemask — was driven off in the back of a white motor, Qudsia waved and blew kisses on the doorstep.

A source said of the visit: “It’s a disgrace he should be allowed out for a day trip — no matter the reason. What they did to an innocent young man was barbaric.

“Zeeshan and Baldy should serve every day of their sentence in prison, where they belong.”

A woman arrived at the house during the visit and also went inside.

An onlooker said: “It looked like any other happy family reunion except for the prison guards and the handcuffs.

“You wouldn’t have thought Zeeshan was going back to finish a life sentence for murder the way they were acting. It’s shameful.”

It comes weeks after we revealed Zeeshan and Baldy, 44, were turned away from their father’s funeral minutes before the service began over fears of violence.

We told in August how the sibling brutes had been granted special leave to say goodbye to Ishaq.

But word spread that they would be at his funeral service and burial — and a mob turned up at Glasgow Central Mosque to show their support.

Riot cops were called in and the brothers were returned to their separate jails.

Zeeshan was part of a gang that abducted Kriss Donald, 15, in Pollokshields, Glasgow, then stabbed the innocent schoolboy 13 times, doused him in petrol and set him on fire in the east end of the city in March 2004.

Ringleader Imran was caged for at least 25 years, while Zeeshan was locked up for 23 years for his “significant part” in the horrifying murder.

The evil mob who kidnapped and killed Kriss were the first ever in Scotland to be convicted of racially-motivated murder.

The terrified schoolboy was targeted in revenge for an attack on Baldy by a group of white men.

He was taken on a 200-mile terror drive to Dundee before being returned to Glasgow, where he was butchered and torched while still alive. A passer-by found his body.

Baldy, Zeeshan and an accomplice fled to Pakistan but were extradited to Scotland to face justice.

After a jury found them guilty of the slaughter, Judge Lord Uist called their “cold-blooded execution” of Kriss an “abomination”.

Last month, the pair had planned to join relatives and pals for dad-of-seven Ishaq’s burial at the Islamic Cemetery in Castlemilk, Glasgow.

But the funeral cortege and family cars arrived at the grave without them.

After talks with cops, security bosses called off the visit due to concerns about the “hostile” crowd.

One onlooker said: “A group of their supporters turned up at the mosque. The funeral became a sideshow — they were only there to see Baldy out the jail. They were hostile, aggressive and threatening.

“Following a risk assessment on the ground, a decision was made that the funeral would have to go ahead without them.”

Police said at the time: “After discussions with a partner agency, the decision was taken not to allow two prisoners to attend a funeral at Glasgow Central Mosque on Tuesday in the interests of safety.”

In 2008, we told how twisted Zeeshan punched a prison guard in a row over a packet of crisps.

He allegedly passed the snack to a pal during visiting — and the warden feared it could contain drugs.

Sources told how he went “berserk” and had to be “dragged kicking and screaming” into the nick’s segregation unit.

A Scottish Prison Service spokesperson said: “We do not comment on individuals.” 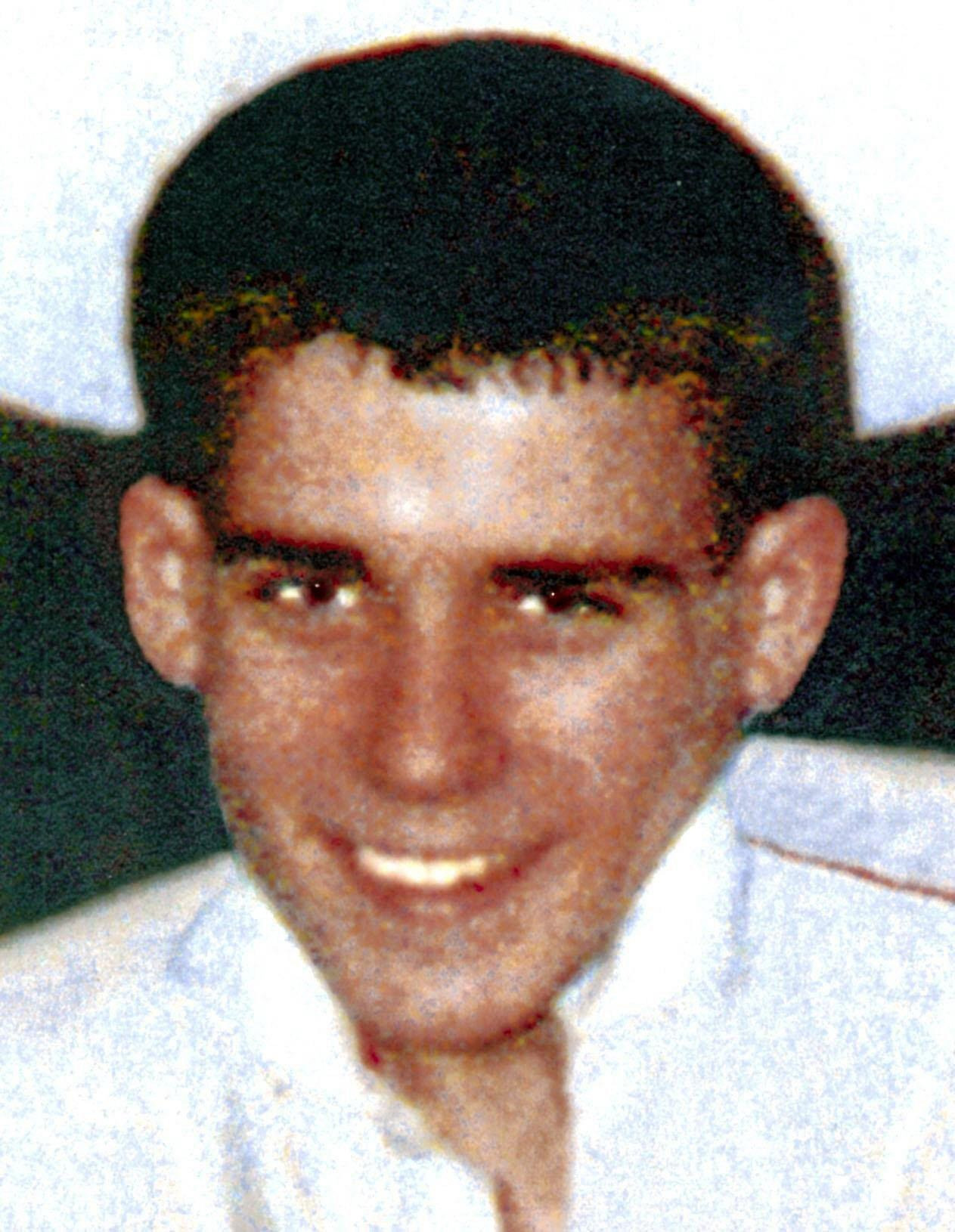 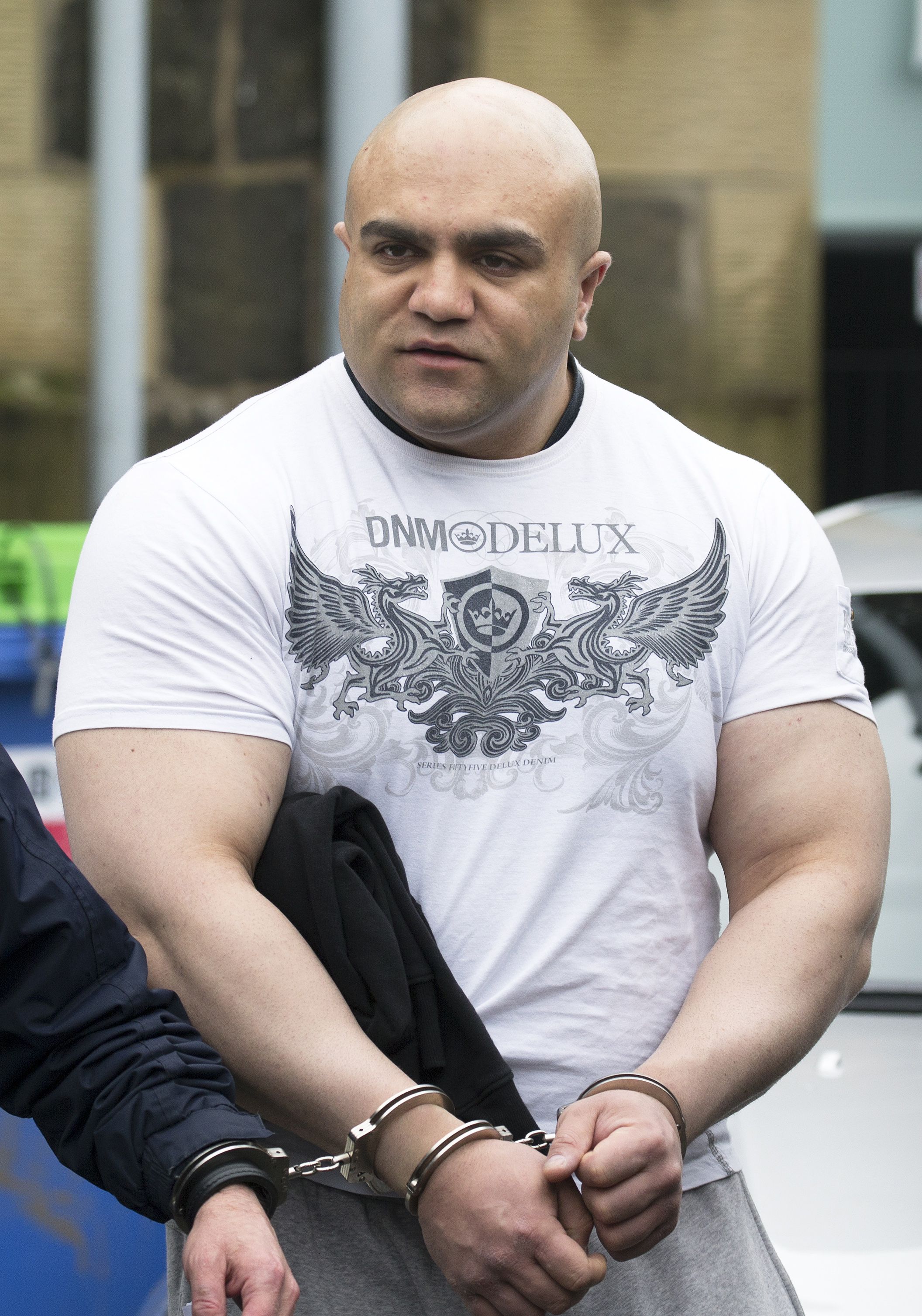 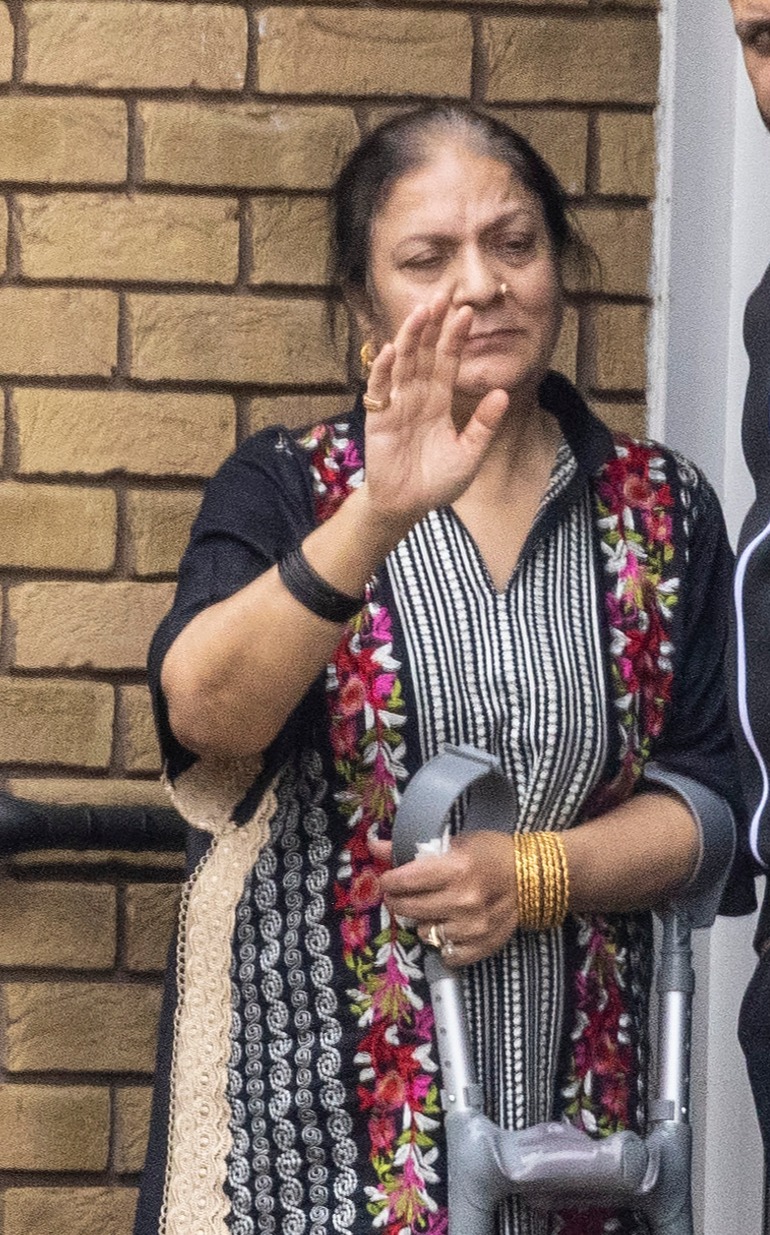