Home » World News » QUENTIN LETTS: He yelled with such force I had to hold my spectacles

QUENTIN LETTS: He yelled with such force I had to hold my spectacles He yelled with such force I had to hold on to my spectacles: QUENTIN LETTS listens to Attorney General Geoffrey Cox fight off MPs heckling his decision not to release full Brexit legal advice 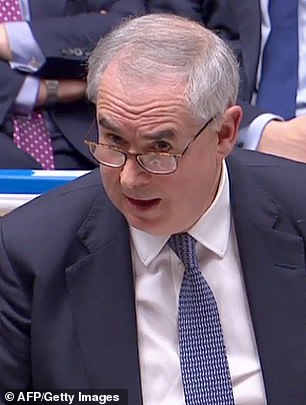 William Shakespeare’s little-known King Geoffrey IV, Part I was given its world premiere in the Commons yesterday. Sensational. A royal clash of tooth on stone! Bone splintered under blade – in verbal terms.

And such magniloquence. The racket was so terrible that BBC Parliament channel engineers listening via their headphones must have been quite dizzy by the end of it. Cotton wool for their eardrums, matron.

Mr Cox used his credentials as a Brexiteer to try to persuade Tory backbenchers to back it.

He may not have succeeded but he delivered his lines with a fortissimo basso theatricality ultra Wolfit, supra Sinden, and in decibel levels beyond even Brian Blessed.

The contrast with dreary Mrs May herself? Extraordinary.

Mr Cox is the one who gave a rousing introduction to Madam Glumbucket at the Tory party conference. Yesterday she was on before him, and had done her usual business of boring the House rigid.

Mr Cox arrived at the oche a couple of seconds late because, being a gentleman, he had waited for her to leave the room instead of barging past her. The House gave him some light-humoured gyp. He flourished a paw, thanking Mrs May for this time being his warm-up act. 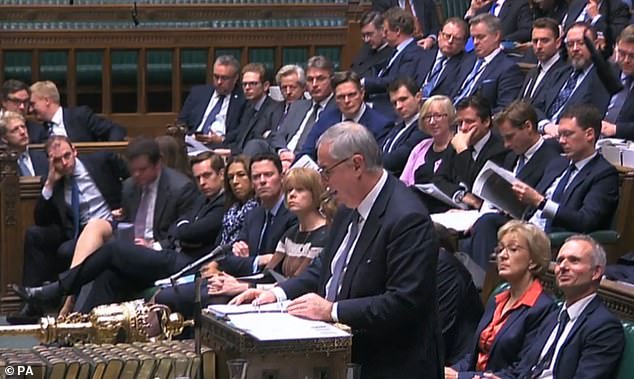 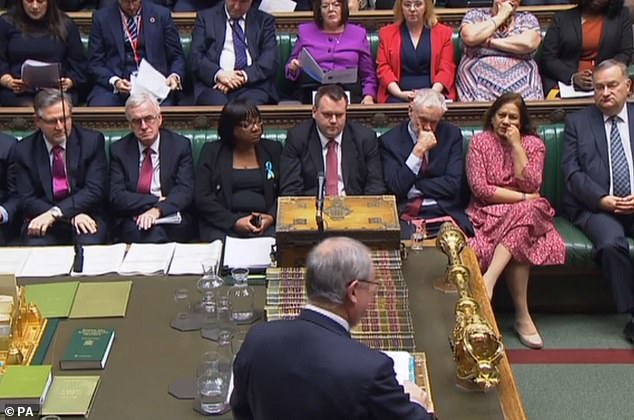 He may not have succeeded but he delivered his lines with a fortissimo basso theatricality ultra Wolfit, supra Sinden, and in decibel levels beyond even Brian Blessed

His opening statement rolled in like spray-haloed Atlantic breakers. Barrister Cox was relating his legal opinion on the May deal. It was not quite the unedited version the House has demanded but it was orotund and long-winded.

For those who have employed barristers, it sounded expensive.

Cox is posh. He pronounces ‘House’ as ‘Hise’. ‘Our people’ becomes ‘aaargh! people!’ Rumpole meets Manningham-Buller, as a Tory MP chum put it.

He speaks legalese not as a scrivening dullard but as a weapon of political heft. He coughs out phrases as a field gun dispenses shells.

The words ‘peradventure’, prudence’, ‘expatiate’, ‘pertinent’ go whistling towards enemy lines. One of the best things was watching lightweights such as Simon Hoare (Con, N Dorset) nod along to it, pretending they understood. Bluffers. 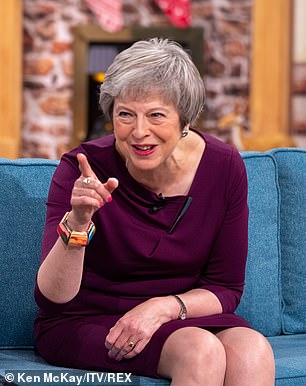 The contrast with dreary Mrs May herself? Extraordinary

When Mr Cox says ‘commentary’, it becomes ‘commentarrrry’, each of those Rs so rolled, it sounds like a Land Rover going over a cattle grid. When he talks of the Irish protocol’ you wonder: ‘Proh To Col’ (maybe a peak in Tibet) or ‘Proat O’Col’ (possibly a Donegal accordion player)? All this time, he fiddles with the seams of his gowns, plunging a hand into one pocket as though rummaging for a long-lost bag of pineapple chunks.

In his booming way, Mr Cox admitted that there was no unilateral way out of the Irish backstop Mrs May wants MPs to ratify.

‘So it’s a trap!’ cried ardent Leaver Sir Desmond Swayne (Con, New Forest W). That heckle may have stung the old rhino. Later he charged into combat, roaring ‘I do NOT BELIEVE that we are likely to be entrapped in it permanently.’ Down came his palm on the despatch box. WHACK! The House jumped. It was the noise a stage-coach ostler might have made when slapping the rump of a reluctant nag.

Many Labour MPs and Tory Brexiteers became hung up on the Government’s refusal to publish that full legal advice. Mr Cox bellowed that it was not in the national interest for everything to be published: e.g. would the Commons insist on all intelligence papers being published? No! So why make such a demand about this?

Nigel Dodds, leader of the DUP at Westminster, pointed out that the May deal, with its backstop, meant that European lawyers, not parliamentarians, would henceforth decide on the sovereignty of our once proud kingdom.

Mr Cox yelled – with such force that I had to hold on to my spectacles – that he had wrestled with this torment. Any threat to the Union, ‘I DISLIKE!’ But, er, yes. There was no getting away from that brutal, fiendish, sovereignty-shredding truth. The backstop is awful.

Cox felt it was worth it. Others will disagree.