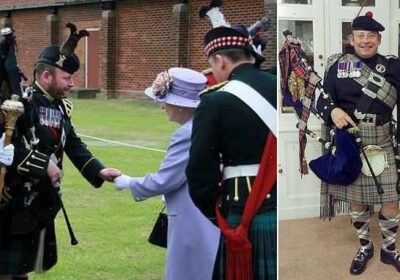 The Queen of ‘banter’! Monarch’s piper of four years says she was ‘easy-going’ and ‘funny’ and secretly ‘liked’ being called Your Royal Highness after he mistakenly called her by the title instead of Your Majesty

Pipe Major Scott Methven, who was the Queen’s Piper until 2019, has recalled the ‘banter’ he had with the ‘easy-going and funny’ monarch during his four-year tenure.

The 48-year-old described being moved from the army in 2015 to live in Buckingham Palace as ‘surreal’, but said that he struck up a ‘great relationship’ with the Queen.

He said: ‘She had really a quick wit as is well-documented. It was just always one-liners, I had so much sort of banter with the Queen, it was great.

‘The first time when I was appointed, she turned around and said to me ‘Look, the only reason you got this job is because you’re the same height as me’ and then she just walked away.

The professional bagpiper recalled accidentally calling the Queen Your Royal Highness in Windsor instead of Her Majesty during the royal Ascot week. 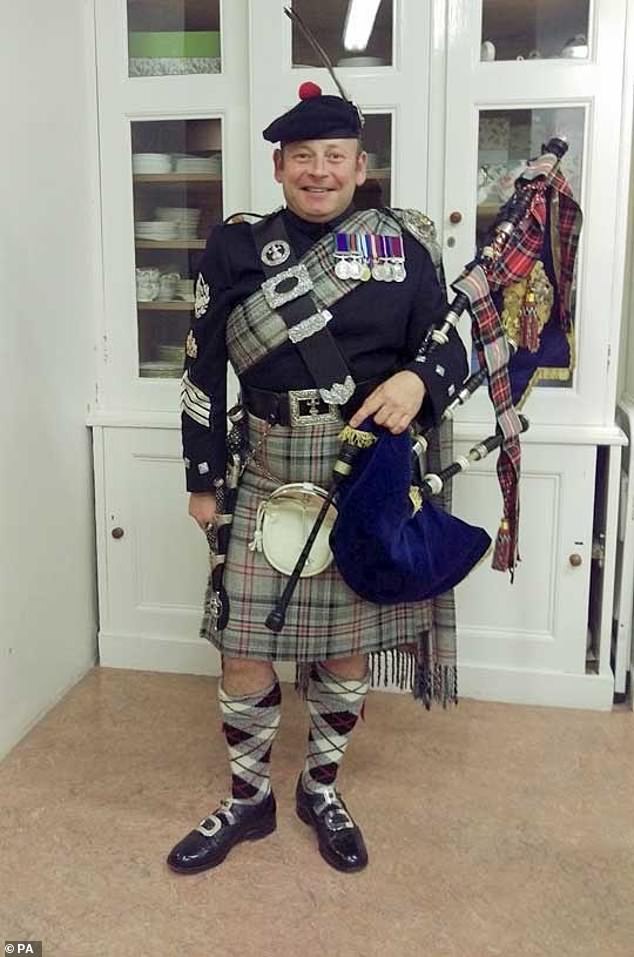 The 48-year-old described being moved from the army in 2015 to live in Buckingham Palace as ‘surreal’, but explained he struck up a ‘great relationship’ with the Queen

‘I didn’t expect it from the Queen if that makes sense. She set the bar so I continued with it and we just used to have a laugh. She was just the most easy-going person to work for.’

Mr Methven, who played at Sting’s 60th birthday party in New York alongside celebrity guests including Stevie Wonder, Hugh Jackman, Robert Downey Jr and Lady Gaga, said he used to have a ‘good laugh’ with the royal family in Balmoral.

He said: ‘I remember one night, it was just the Queen, the Duke of Edinburgh, and several other members of the family. The invited guests hadn’t arrived so I said I would mix it up and I did movies on the bagpipes.

‘I would go around the tables and it would be like Top Gun and the Prince of Wales (now King Charles) had asked if I could do AC/DC Thunderstruck.

‘Up in Balmoral it was such good fun, the duke would try and trip me up, put his foot out and things like that, things people wouldn’t expect.

‘I think that is one thing I loved about the Queen, she was so easy-going and funny.’ 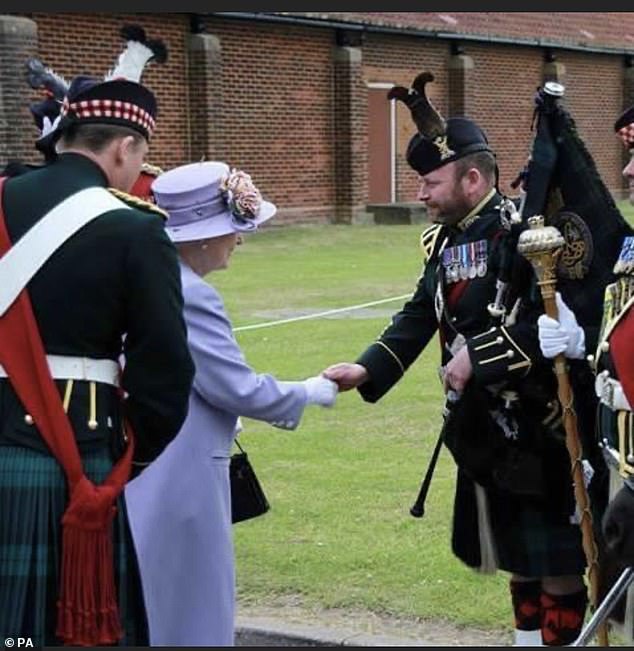 ‘I remember King Charles III pulled me to the side and he said to me ‘Can I just say, every time I see you with Ma’ma you make her really happy, please just keep doing what you’re doing.’ ‘It was just a great relationship. She made you feel like she was just your granny’

The professional bagpiper recalled accidentally calling the Queen Your Royal Highness in Windsor during the royal Ascot week.

He said: ‘She never missed a beat. She just looked to the right. I said ‘I do beg your pardon, good afternoon Your Majesty’ and she grabbed me by the arm and said ‘Pipes, it has been 60 years since somebody called me Your Royal Highness and I quite liked it.’

‘It was brilliant and she was laughing.

‘I remember King Charles III pulled me to the side and he said to me ‘Can I just say, every time I see you with Ma’ma you make her really happy, please just keep doing what you’re doing.’

‘It was just a great relationship. She made you feel like she was just your granny.’

During his time as the Queen’s Piper, Mr Methven lost his mother and wife to terminal illnesses as well as his father within the space of eight months.

Prior to the death of his wife, Mr Methven recalled: ‘I was standing with the Queen and she said ‘If you’re not here in the morning and you don’t play the bagpipes, then I know you’re away. Don’t wait to ask anyone, just go home if your family need you because it’s family first.’

‘She grabbed me by the arm again and said ‘you know Pipes if anyone has a problem with that you tell them that I said it was okay to go.’

‘That’s the type of person she was. She was the best employer I’ve ever had, just fantastic.

‘She didn’t make you feel like she was your boss. We’re talking about the best-known women of the last century and she was just a great person.’

Mr Methven, who was the 15th Queen’s Piper since 1873, said he called ‘people in the know’ at the Palace to check the Queen was okay after seeing the ‘frail’ pictures of the monarch shaking hands with the new Prime Minister Liz Truss on Tuesday.

He said he ‘had an inkling something wasn’t quite right’ and was waiting at the airport in Naples, Italy when he heard the news of the Queen’s passing.

He said: ‘I was devastated. It was my daughter who phoned me and she was crying. As my daughter put it, it felt like she (the Queen) was the only one who cared about our family.

‘She was the one who said I could leave my kids in Balmoral Castle, she said go and sit in the hospital with your wife.

‘I was devastated, it feels like I have lost a member of my family. The Queen had invited me up on September 22 to stay and attend the next Ghillies Ball so I was going up in a couple of weeks.

‘I spoke to the Queen more in that four-and-a-half-year period in a given week in person than I did my own wife.

‘I only saw my wife at the weekends, I was in London Monday to Friday and the Queen was the woman I saw the most, every day. She was just a wonderful person.

‘It is the humanity side of things that I don’t think people would actually believe, how much she genuinely cared, and nothing was too much of a problem.

‘I think she cared more about other people than her herself and that’s quite a thing to say about anybody.’

On Sunday, the Queen’s oak coffin, draped with the Royal Standard of Scotland with a wreath of Balmoral flowers on top, began its six-hour trip to Edinburgh.

It was played out of Balmoral estate by the current Queen’s Piper, Pipe Major Paul Burns of The Royal Regiment of Scotland.

Mr Methven added: ‘Last night I spoke to the Queen’s Piper to give some advice and I was happy to give it, it’s nice that people still get in touch with you but everybody’s obviously devastated.

‘He played out the ballroom, the six ghillies carried the coffin and he will be playing at St Giles’ tomorrow.

‘He will be the Piper playing down at the service in London and also when Her Majesty goes to Windsor Castle into the chapel he will play the pipes for that as well.

‘So he’ll be very much front and centre for this. Pipe Major Paul Burns is a cracking piper and a good man, he will do a fantastic job.’