Home » World News » QAnon believers think there’s a vast cabal snatching up children in kidnappings, but almost every child reported missing turns out to be a runaway 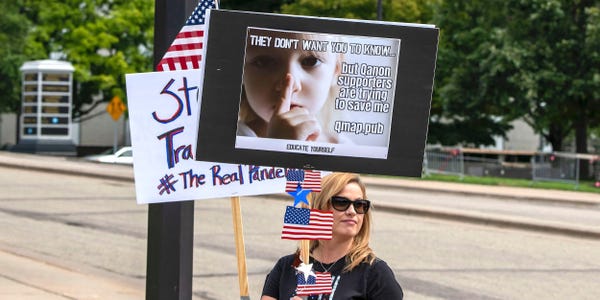 In the QAnon theory's conspiratorial view of the world, there's a vast network of liberal elites working to snatch up children in random kidnappings and bring them into sex trafficking rings.

That is, of course, untrue. And anti-sex-trafficking experts say the idea of mass kidnappings also shows a distorted understanding of a real-life problem.

Most missing children aren't the victims of kidnappings. More often, they're vulnerable runaways.

The QAnon conspiracy theory serves as an umbrella for a number of outlandish beliefs: That vaccines are harmful, that President Donald Trump secretly collaborated with Robert Mueller, and that mass shootings are organized by Democrats.

The relentless focus on child trafficking is at the center of it all. But QAnon believers spreading false or inflated statistics on the subject is a "big problem," according to Erin Albright, a law enforcement consultant who helps pursue human trafficking cases.

"It misrepresents the problem," she said. "It tends to be represented in a very sensational way, and it tends to default to that dominate narrative of 'the little girl kidnapped out of a suburban area,' something that's the complete opposite of what trafficking looks like."

According to the National Center for Missing and Exploited Children (NCMEC), the organization assisted with 29,000 missing children cases in 2019, and 91% of them were endangered runaways.

The NCMEC says on its website that one in six runaway children are "likely victims of child sex trafficking" — meaning around 4,398 children per year — but there's no hard evidence behind that number.

The figure is based only on cases reported to the organization, and it's based on whether the person who fills out the report suspects an alleged victim has been sex-trafficked, according to Huffpost. The organization also assesses "risk factors or indicators that may put a child at higher risk for child sex trafficking," spokesperson Brenna C. O'Donnell told Insider. The NCMEC doesn't confirm what actually happens in each of those cases.

As Huffpost also points out, even the 9% of children who aren't runaways according to the NCMEC's statistics may be inflated. As the name suggests, the organization has a specific focus on exploited children. Missing children suspected of being victims, rather than runaways, may be overrepresented in their sample.

And even that sample is a small fraction of the roughly 420,000 total reports of missing children every year. In 2012, the center estimated that, on average, only 115 children are abducted by strangers each year.

Albright said it's also challenging to get hard data on sex trafficking, specifically, since much of it is done behind closed doors. The cases are real, but they're much smaller than what many people expect.

According to a 2019 report from the Human Trafficking Institute, there were only 72 new federal criminal cases involving child sex trafficking launched last year. In total that year, there were 306 active federal sex-trafficking cases that involved child victims only.

Jamie Gates, a professor at Point Loma Nazarene University who researches sex trafficking, told Insider that data can be hard to find because victims aren't likely to come forward, and a lot of sex trafficking happens under the radar.

But, Gates said, QAnon theories claiming that hundreds of thousands of kids are being kidnapped and sex trafficked in the US each year just aren't true.

"Sex trafficking is real, it's hidden, and it's at a larger scale than what most people tend to think about," Gates said. "But it's not at the scale that's being exaggerated by the QAnon conspiracies."

If you want to help sex-trafficking victims, focus on safety nets

Albright told Insider that sex trafficking is often misrepresented in the public eye. She pointed toward a case earlier this month in which Georgia officials found 39 missing and vulnerable children, where multiple media sites described it as a "sex-trafficking ring." Officials told HuffPost they suspected 15 of the children were victims of trafficking.

Albright said the recent "Save the Children" marches largely supported by QAnon believers have helped advance misinformation about sex trafficking.

According to Vox, QAnon followers used a "save the children" hashtag this summer to make the group "more mainstream," and create a platform to spread its ideology more publicly.

"It distracts attention and resources from the actual problem," Albright said. "If you have everybody doing these marches with QAnon … that's really distracting from other critical things we can be doing to better support victims and potential victims, which is basically lobbying for better housing support, improving the child welfare system, and stuff like that."

According to the Department of Justice, child sex traffickers usually target vulnerable children by luring them in with "offer of food, clothes, attention, friendship, love, and a seemingly safe place to sleep."

Most often, factors including recent relocation, substance use, mental health issues, involvement in child welfare, or being a runaway can put a child at risk of being trafficked, according to the anti-trafficking organization The Polaris Project.

After gaining the child's trust, the trafficker will "begin engaging the child in prostitution, and use physical, emotional, and psychological abuse to keep the child trapped in a life of prostitution," the Justice Department says.

Albright said people who are actually interested in helping stop sex trafficking should look at data on vulnerable communities in their area, and look at how they need help.

"We don't have good data. What you should look at instead is vulnerability data," she said. "You should look at how many runaway and homeless youth there are in your area, and what the population of migrant workers is. That sort of indicates where there could be a problem. Because if we really want to be effective, our goal would be prevention."