By the time the horses thunder down the home straight at Flemington for the Melbourne Cup, the race to claim Bendigo’s honours will have already been won.

The Bendigo Cup, held on the last Wednesday of October each year, is a public holiday in the regional Victorian city.

But rather than luring thousands of spectators to the race this year, crowds will be dispersed across Bendigo’s pubs, venues and laneways in a bid by Bendigo Cup organisers to create a festival-like atmosphere amid the limitations of the pandemic. 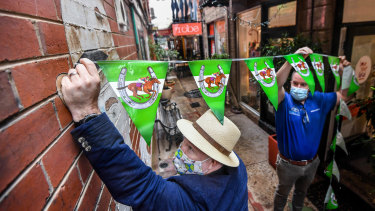 Finn Vedelsby and Aaron Hearps preparing for the Bendigo Cup in one of the city’s laneways. Credit:Joe Armao

At least 26 pubs and bars have signed on to host Bendigo Cup-themed events that will include “fashions off the field” competitions, sweepstakes and, of course, watching the races.

The Bendigo Cup is a big event in Bendigo’s social calendar and a substantial contributor to the local economy.

Bendigo Tourism Board chairman Finn Vedelsby said it was sad that crowds could not attend this year but the city would make sure it still marked the event in style.

“We’re saving the spirit of the cup,” he said.

Mr Vedelsby, who runs The Dispensary bar in Bendigo, said for many people it would be their first chance to dress up in a long time.

“There are some people who are itching to get out and celebrate and wear some nice clothes.”

Mr Vedelsby will make use of a laneway space for patrons at his bar.

He urged revellers to shop locally for an outfit so that retailers derived some benefit from the celebrations. 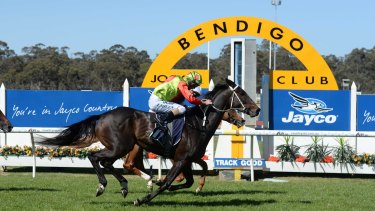 Bring Something wins the Bendigo Cup in 2014.Credit:Jim Aldersey/Bendigo Advertiser

Bendigo Jockey Club chief executive Aaron Hearps said he hoped the revamped event would deliver an economic boost to the local hospitality sector, which had suffered badly during the pandemic.

The Bendigo Jockey Club has put the call out to its 700 members to watch the races at a local venue rather than staying home.

“Because it’s a public holiday here we want to remain relevant within the Bendigo community,” he said. “I think country racing especially in Victoria really brings the community together.”

The jockey club distributed packs to venues taking part with paddles for the fashion competition that will be held on social media and sweepstake posters with all the runners.

With regional venues allowed to have a maximum of 40 people indoors and 70 outside, the Bendigo Cup promises a much more carnival-like atmosphere than restrictions currently allow in Melbourne.

But if infection numbers remain low, Melbourne will move to the next step allowing hospitality venues to serve a maximum of 20 people inside and 50 outdoors.

The Bendigo Cup was first held in 1946 and stretches across 2400 metres. Some winners have gone on to compete in the Melbourne Cup.

Last year the Bendigo Cup attracted 6700 people and delivered $4 million in expenditure (mostly by locals), according to figures supplied by the Bendigo Jockey Club.

The event also attracted more than 300 interstate visitors and a small number of travellers from overseas. Races in Bendigo have continued throughout the year, albeit without crowds since March.

Mr Hearps said the racing industry employed many people in the region.

“A lot of trainers said if racing was going to close for more than four weeks a lot of their businesses wouldn’t be able to survive.”