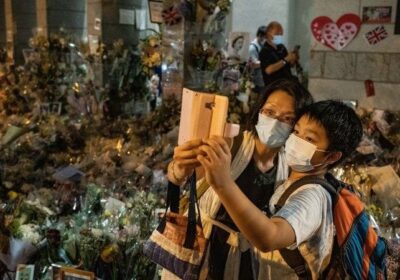 Hong Kong: Hundreds of Hong Kong residents are lining up in front of the British Consulate General for hours each day to pay their respects to Queen Elizabeth II, leaving piles of flowers and handwritten notes.

The collective outpouring of grief after her death last week is perhaps the most ardent among the former British colonies, where mourning has been generally subdued. It’s seen by some experts as a form of dissent against increasingly intrusive controls by communist-ruled Beijing, which took over the territory in 1997. 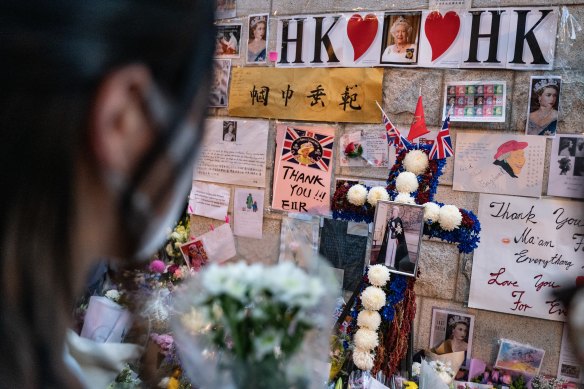 A woman lays flowers as a tribute to Queen Elizabeth II outside the British Consulate in Hong Kong.Credit:AP

Some Hong Kongers are nostalgic for what they view as a past “golden age” under Britain’s not entirely democratic colonial rule, when the city of about 7 million people gained stature as a world financial center and tourism destination.

The Queen’s death has sparked a flurry of interest in British memorabilia, among other things.

The Queen is nicknamed “si tau por” in Hong Kong. Pronounced “see-tao-POHR” in the local Cantonese dialect, that translates to “boss lady.”

“We used to call her ‘si tau por’ when we were under her rule. It’s simply a way of showing respect to her. There was a feeling of kindness from her, she’s not the kind of boss who is up above you,” said CK Li, a resident who queued for over two hours to pay his respects. 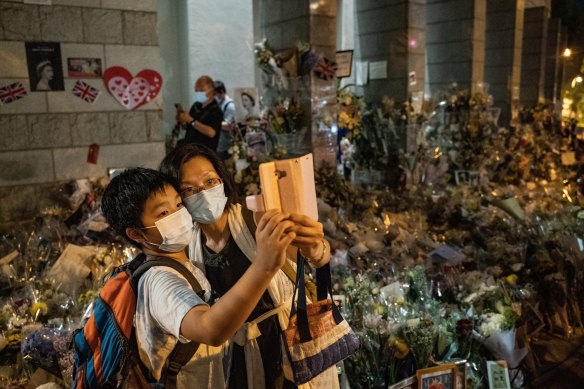 People pose for a selfie in front of the flower tributes outside the British Consulate in Hong Kong.Credit:AP

Another resident, 80-year-old Eddie Wong, said she was there “out of true feelings” from her heart.

“People in Hong Kong love her,” said Wong. “Because when we were under her rule, we enjoyed democracy and freedom and we were very grateful. I want to bid farewell to ‘si tau por’ who is in heaven.”

With its July 1, 1997, takeover China promised to leave Hong Kong’s Western-style civil liberties and institutions intact for at least 50 years. Many raised in the former territory grew up hoping for still greater freedoms.

But following months of anti-government protests in 2019, Beijing imposed a tough national security law on the city, seeking to stamp out public dissent.

News outlets deemed overly critical of Beijing have been forced to shut down and dozens of activists have been arrested. The mass protests ended. Tens of thousands of Hong Kong residents have chosen to emigrate to the United Kingdom and other places such as Taiwan.

So far, the authorities have allowed the orderly, sombre shows of respect to continue.

“I would imagine that some people are going there not so much for nostalgia reasons, but as a kind of protest, now that dissent is suppressed,” said John Burns, an honorary professor of politics and public administration at the University of Hong Kong.

“Some people, for example, who agree with the kind of universal values that the U.K. stands for, and that were incorporated in our Bill of Rights at the end of colonialism could participate in this as a form of protest,” Burns said. 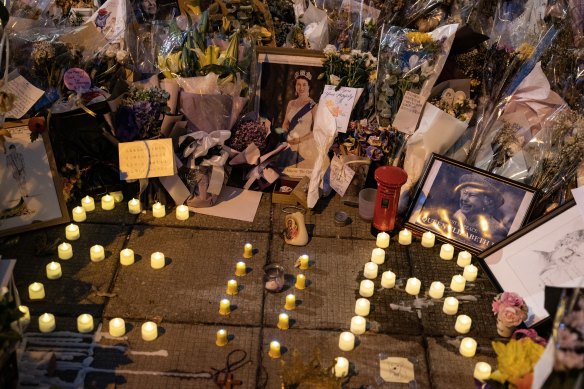 Flowers and messages are placed for Queen Elizabeth II outside the British Consulate in Hong Kong.Credit:AP

“There are some who are genuinely nostalgic and have sentimental feelings for the Queen, but there are also people who have grievances about the current situation in Hong Kong,” Lau said.

“We cannot rule out that some have used this occasion to express that,” she said.

At the same time, public figures in Hong Kong are being scrutinised over their response to the queen’s passing, and drawing criticism if they are viewed as too admiring of her reign or British rule in general.

Commenters on mainland Chinese social media sites have blasted veteran actor Law Kar-ying for posting a selfie outside the British Consulate on Instagram with a caption including the line, “Hong Kong was a blessed land under her reign.”

Harshly criticised for attributing Hong Kong’s prosperity to British rule, Law deleted the post and issued a video apology on the Chinese microblogging site Weibo. He appealed to people not to read too much into what he said.

“I am Chinese and I will forever love my motherland. I’m sorry,” Law said.

Not all Hong Kongers are sentimental about British rule. Some resent London’s decision not to grant them full British citizenship, instead giving them British National Overseas passports before the handover, which do not guarantee a right to live in the UK.

“The British took away the rights of those born in Hong Kong before 1997. They didn’t protect those rights,” said Leslie Chan, who said he had no plans to show his respects to the Queen. “When the British government discussed with China about the future of Hong Kong, Hong Kongers were cut off from the discussion,” he said.

Some in Hong Kong are only focusing on the last few decades of British rule before the handover to China, when the city became increasingly prosperous and the colonial government burnished its legacy with new parks, train lines and other modern amenities.

British rule in Hong Kong benefited the territory in some ways but colonialism is ultimately harmful for its hegemony and racism, said Burns.

“When you’re talking about the benefits of colonialism, you cannot just take the last 10 years or 20 years in Hong Kong,” he said. “You have to look at the whole thing.”