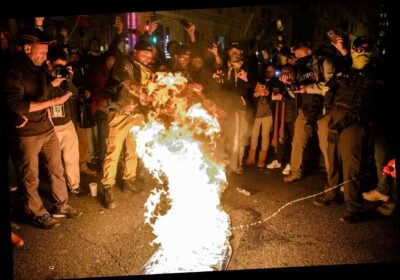 PROUD Boys boss Enrique Tarrio has been nabbed for burning a Black Lives Matter banner allegedly stolen from a church.

The militant politician from Florida was arrested by D.C. police late on Monday, say officials. 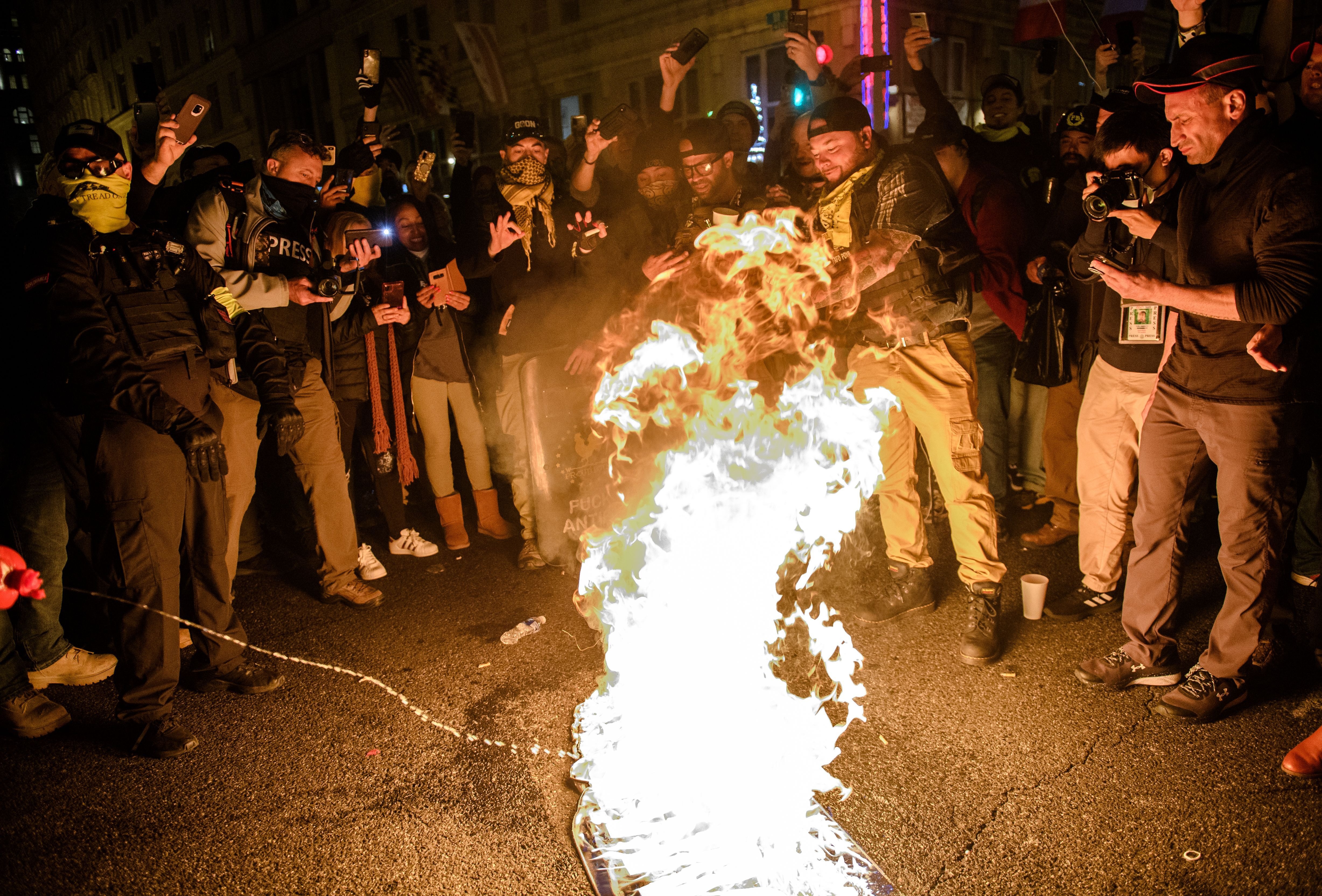 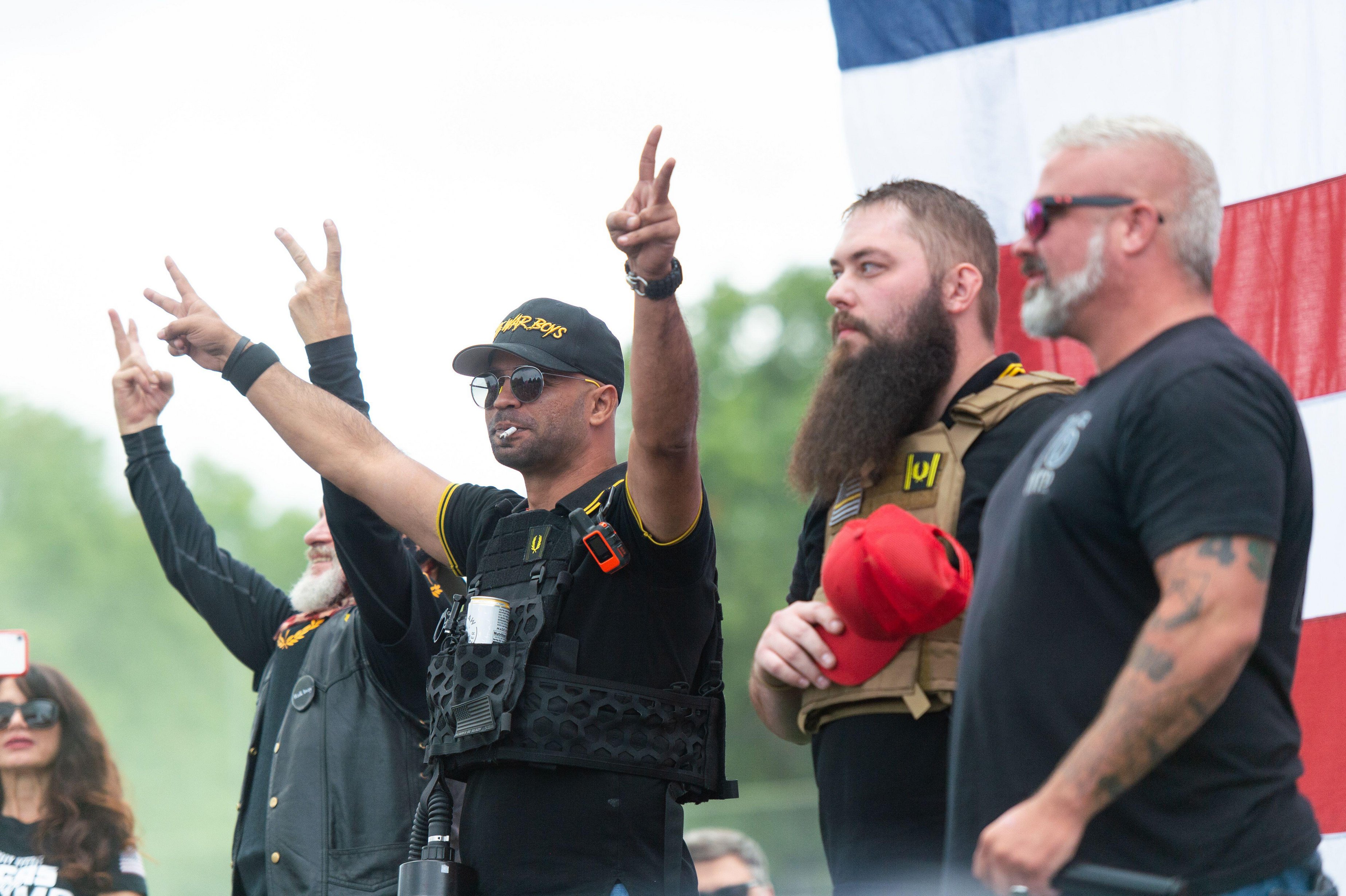 “While we were on the call, sirens started blaring in the background.

“He told his driver to pull over.

“He *may have been arrested.”

The Washington Post confirmed that Tarrio was arrested by D.C. officers on a warrant charging him with burning a Black Lives Matter banner.

The banner was allegedly stolen from a historic black church during a demonstration last month, the paper added.

Cops stopped a vehicle Tarrio was traveling in, shortly after it entered the District, said Dustin Sternbeck, a police spokesman.

Sternbeck confirmed that Tarrio has been charged with one misdemeanor count of destruction of property in connection with the December 12 burning of a banner taken from Asbury United Methodist Church.

Tarrio had allegedly told the Post in December that he was among those who had burned the BLM banner.

He remains in custody.

Tarrio has also been charged with two counts of possession of high capacity ammunition feeding devices.

The Post explains that this alludes to a firearms magazine which allows guns to hold additional bullets.

City officials in Washington on Monday had warned supporters of President Donald Trump not to bring guns to protests this week. 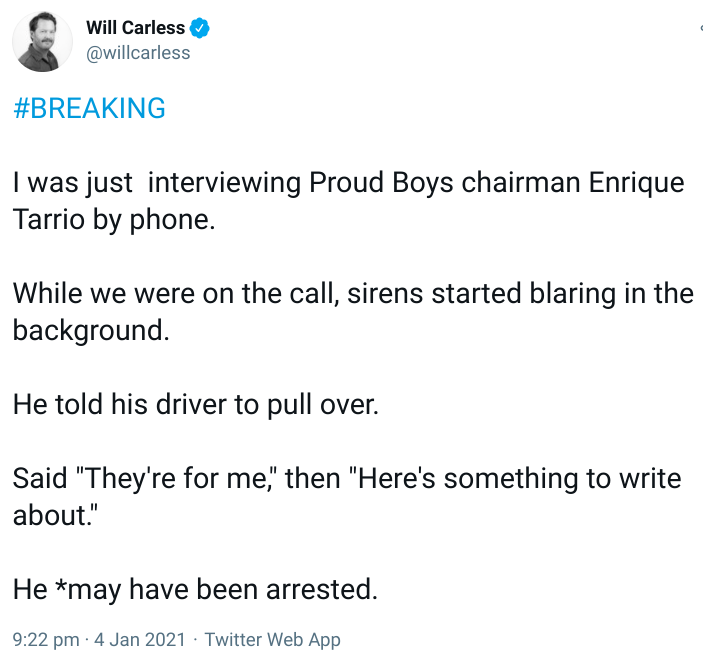 They were told they shouldn't be armed during congressional certification of Trump's election defeat.

“We have received some information that there are individuals intent on bringing firearms into our city and that just will not be tolerated,” Police Chief Robert Contee told a City Hall news conference.

He added that anyone found doing so or provoking violence would be arrested.

More than 300 troops would be on hand to support the city government, providing crowd control and aiding fire and rescue services, the D.C. National Guard said in a statement on Monday.

"They will be joined by the US Capitol Police, US Park Police and Secret Service," Contee added.

The District has some of the America’s strictest gun laws, and forbids open carry of weapons or possession of a handgun without a local license.

Thousands of Trump supporters, including some far-right nationalist groups that openly carry arms at protests elsewhere, are expected to converge on the U.S. capital starting on Tuesday.

They planned to oppose Congress’ certification the next day of the Republican president’s November 3 election loss to Democrat Joe Biden.

Contee said the protests could be bigger than November and December rallies marred by stabbings and brawls as hundreds of Proud Boys attend.

This is a controversial group of self-described “Western chauvinists,”.

They planned to join and support fellow Trump loyalists who have previously clashed with counter-protesters, and sought fights with antifa, or anti-fascists, and Black Lives Matter activists.