PROTESTERS armed with Molotov cocktails in Portland torched a Starbucks and sprayed "BLM" and "All Cops Are Bast**ds" on the walls.

Demonstrators were chanting "Jason Washington," the name of a black man who was killed by Portland State University campus police in 2018. 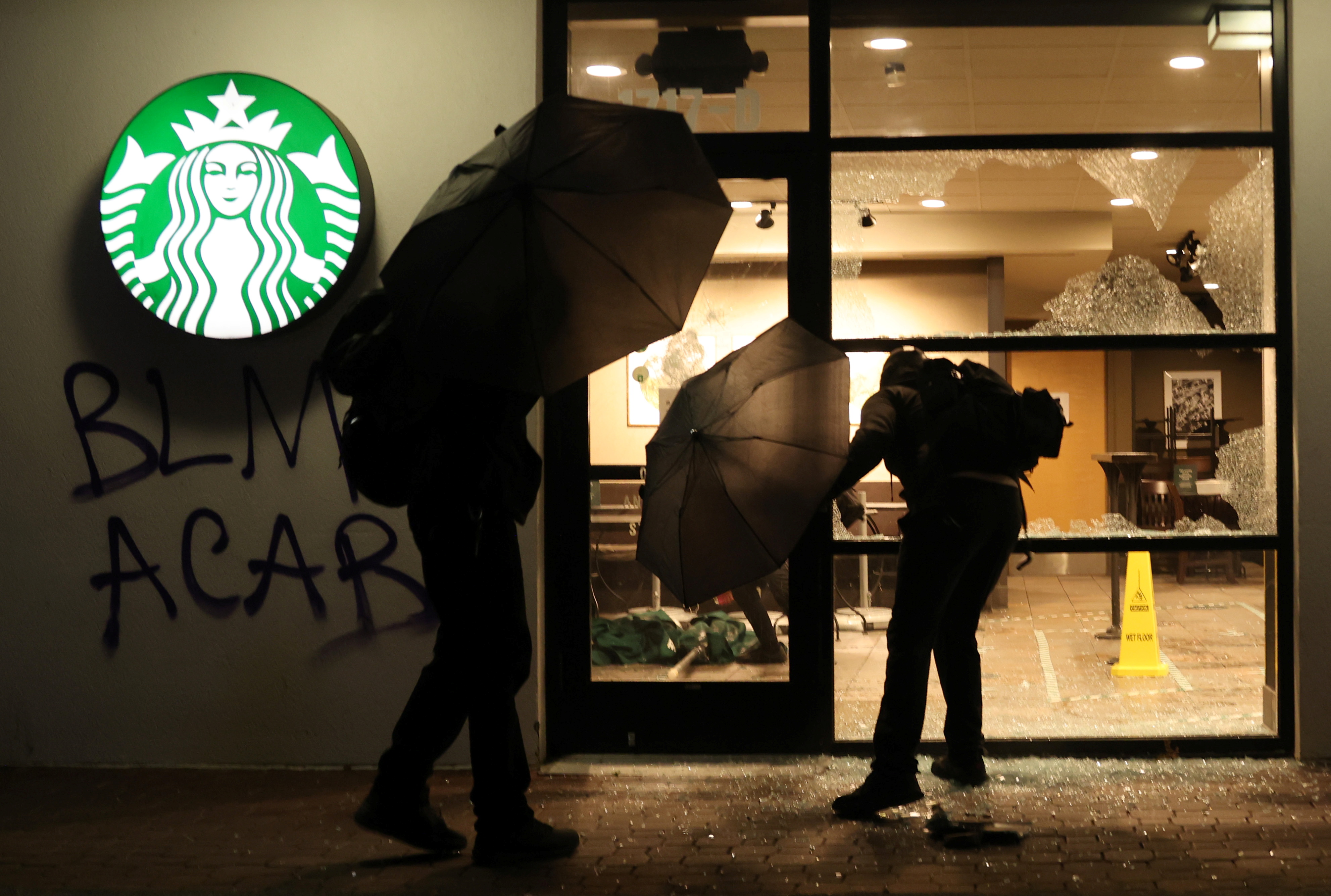 The University's public safety office windows were smashed, as well as windows of a Starbucks.

Protesters threw flammable liquid inside of the coffee store and graffitied "BLM" and "ACAB" on the walls.

Douvia was arrested for criminal mischief, burglary and disorderly conduct. Austin was detained for interfering with a peace officer. 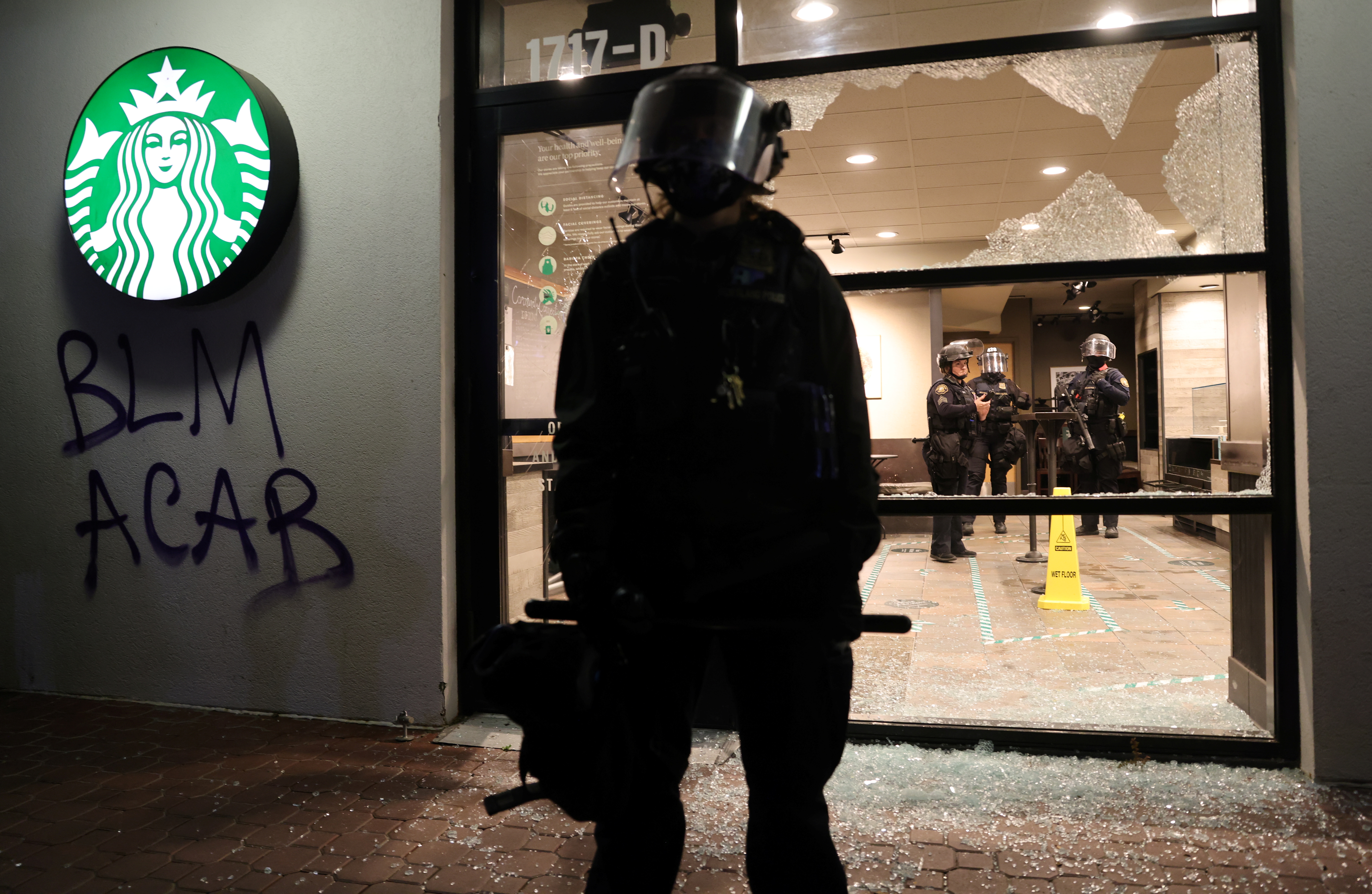 The news comes as it was announced that federal officers must not engage in crowd control enforcement more than one square block from the Mark O. Hatfield United States Courthouse in Portland, Oregon under a federal judge’s court order.

He found that federal officers’ actions have chilled First Amendment’s rights of free speech and right to assembly for plaintiffs who sued the US Department of Homeland Security and other federal law enforcement agencies. 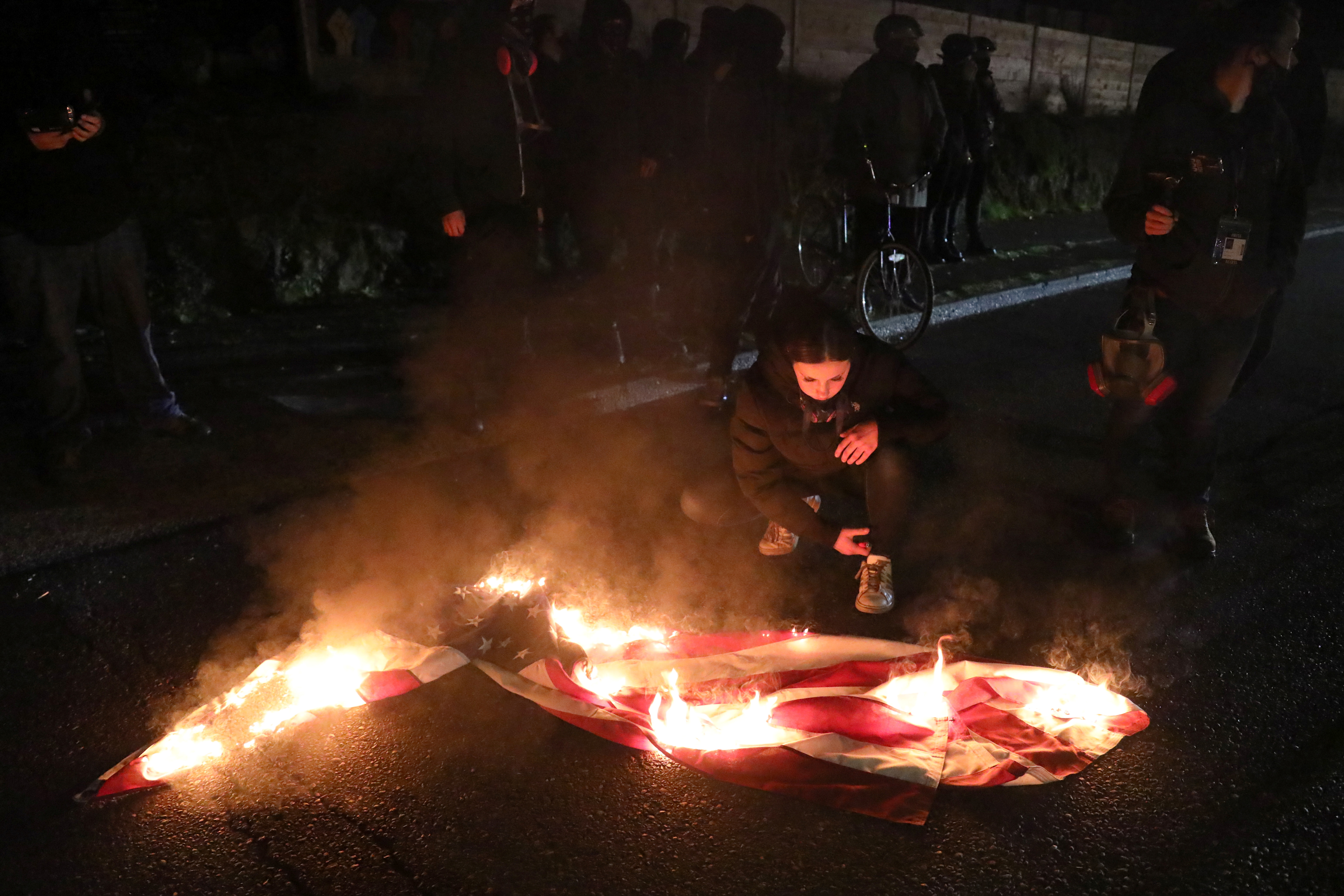 “Within that sphere, called the ‘Excluded Area,’ federal law enforcement can engage in crowd control activities subject to all the pre-existing limits, constitutional or otherwise, on their conduct, but not covered by this injunction,” Mosman wrote. “Beyond that line, federal agents must cease crowd control activities, including clearing people away from the U.S. Courthouse.”

The judge underscored that federal agents “cannot individually target protesters in retaliation for their speech, anywhere or anytime.”

Mosman described the order as a “geographical solution,” that will provide protesters with a “zone of safety″ where they can peacefully protest.

The federal officers can make arrests or engage in “hot pursuits” of suspects within or outside the excluded area, according to established law, the judge wrote. 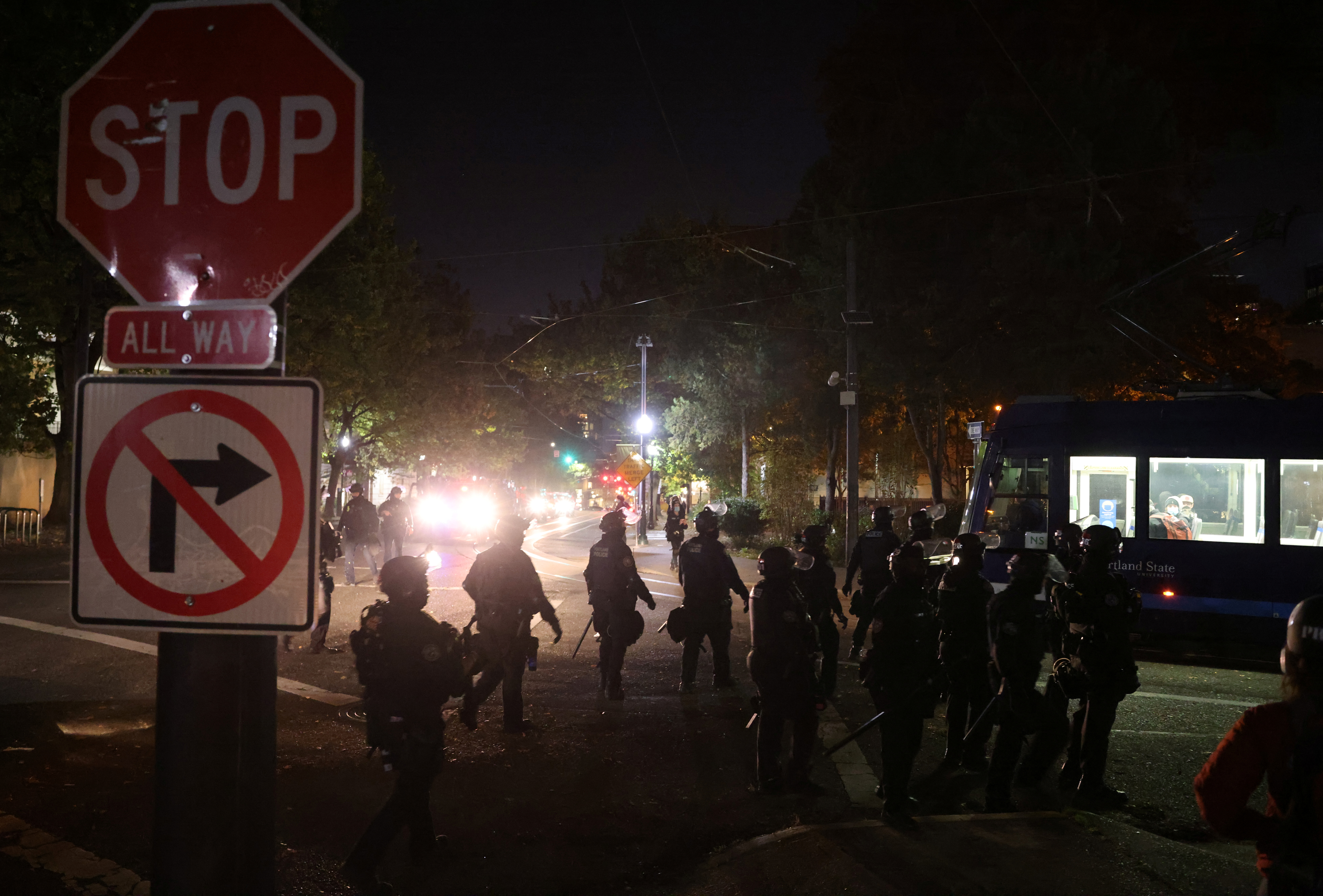 The plaintiffs are state Reps. Janelle S. Bynum, D-Clackamas, and Karin A. Power, D-Milwaukie, along with Portland lawyer and legal observer Sara D. Eddie, the First Unitarian Church of Portland and Western States Center, an organization that monitors right-wing extremism.

The judge found that tweets by President Donald Trump during the last few months helped incite improper conduct by federal officers responding to protests against police brutality and systemic racism in Portland and directed both sides in the lawsuit to hash out “rules of engagement” for the officers near the federal courthouse.

The plaintiffs sued Homeland Security, the U.S. Marshals Service, the Federal Protective Service and US Customs and Immigration Enforcement, saying the aggressive dispersal of protesters by federal agents outside the courthouse this summer encroached on state powers and breached the First Amendment by interfering with the right to protest. 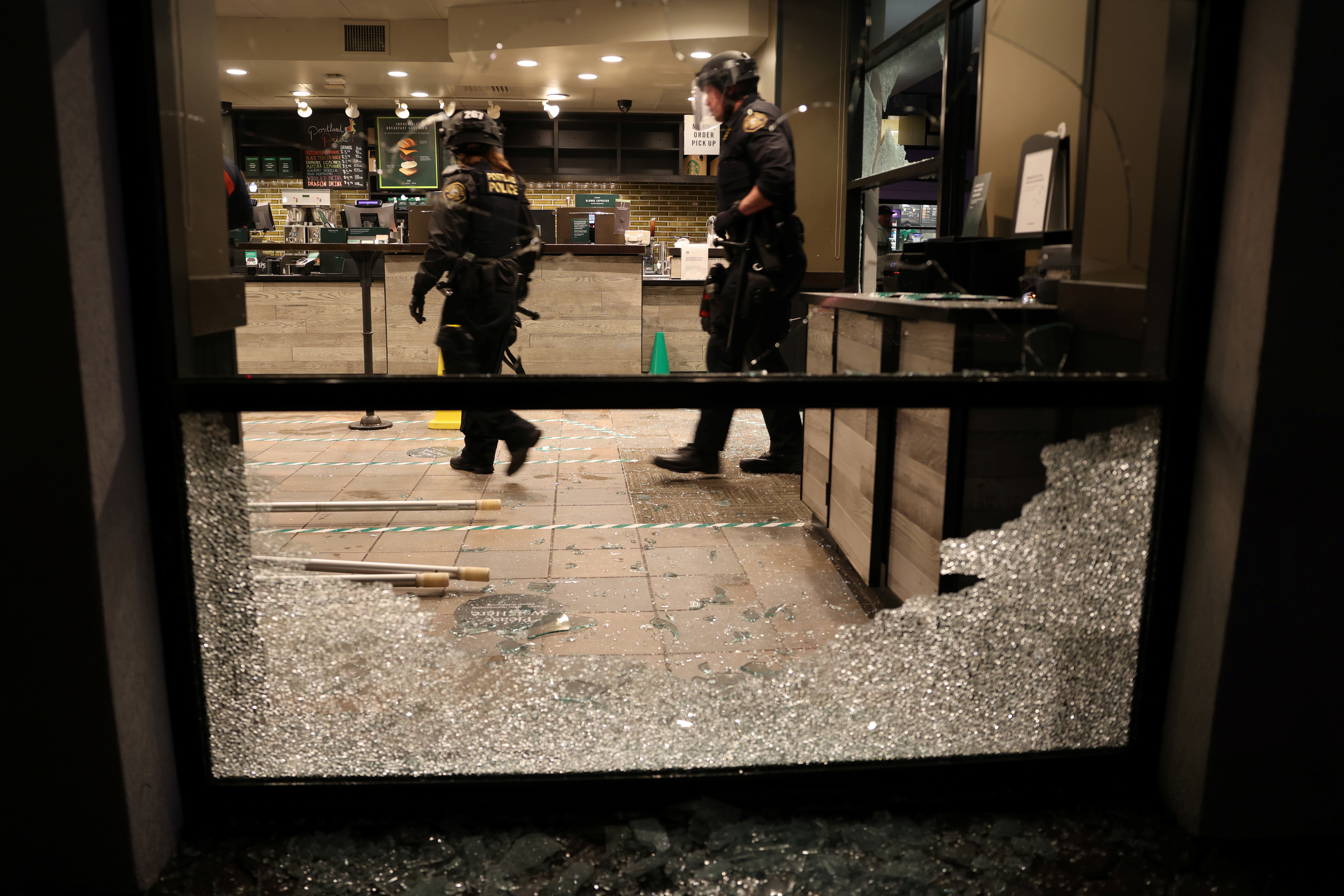 Their attorneys argued the possibility of mass federal intervention remains, submitting to the court Twitter statements by Trump and statements from Acting Homeland Security Secretary Chad F. Wolf that have threatened the return of additional federal officers to the city.

Attorney Jeffrey A. Hall, representing the U.S. Department of Justice, argued there’s no need for a court order because the expanded federal presence in Portland has fallen significantly. “What they were attempting to do is push violent crowds back during a very violent period,” Hall said. “There’s nothing to show it’s going to be a problem in the future.”

Mosman disagreed, ruling that the presidential tweets showed “a substantial risk of harm” to the plaintiffs.

In his written order Monday, the judge wrote, “The showing that the federal agents have any retaliatory motive is nonexistent. Unfortunately for the federal agents, they operate under the burden of statements from the President (and for Border Patrol agents, Acting Secretary Wolf) expressing precisely such a motivation. For these and other reasons discussed at oral argument, I have found Plaintiffs are entitled to some form of injunctive relief.”

Mosman, however, rejected the claim that the federal officers violated the 10th Amendment’s separation of powers.

The suit was filed as local, state and congressional leaders from Oregon condemned what they’ve described as heavy-handed force used by the federal officers sent to Portland through an executive order signed by Trump in July.