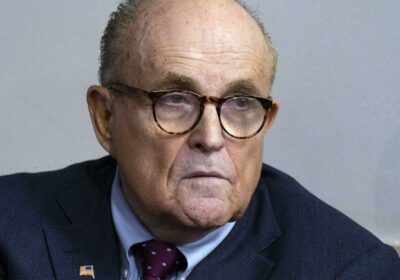 Prosecutors in Manhattan have asked a federal judge to appoint a “special master” to sift through evidence belonging to Rudy Giuliani as the government continues investigating former President Donald Trump’s personal attorney for possible lobbying infractions.

In a sign of growing legal scrutiny targeting the former New York City mayor, FBI agents carried out a search warrant at Giuliani’s home and office last week. Investigators confiscated his electronic devices, including a cellphone.

The warrant was in relation to an ongoing probe led by federal prosecutors from the Southern District of New York regarding Giuliani’s alleged lobbying efforts abroad during the Trump presidency, which was a key focus of the first impeachment case against then-President Trump.

In a letter unsealed late Tuesday, U.S. Attorney Audrey Strauss wrote that the appointment of a special master is necessary given the “unusually sensitive privilege issues that the warrants may implicate” — a reference to Giuliani’s work as counsel to the former president.

It is not uncommon for the court to appoint a special master to conduct an impartial review of evidence for items protected under attorney-client privilege and to referee disputes between the government and their investigative targets.

Prosecutors cited a similar appointment in the case of another of Trump’s former lawyers, Michael Cohen, as precedent for a special master in Giuliani’s case. The government suggested to the judge that it confer with Giuliani’s legal team to gather a list of potential candidates for the role.

Giuliani’s work on matters related to Ukraine and his business dealings with two Soviet-born associates has been the subject of an ongoing investigation by prosecutors in the Southern District of New York, sources previously told ABC News.

Giuliani and his attorney, Bob Costello, have both vehemently denied allegations of wrongdoing. Giuliani has not been charged with a crime.

“They’re trying to make Rudy Giuliani look like a criminal,” Costello said last week. “He has done nothing wrong.”