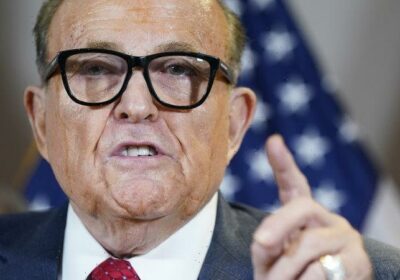 Atlanta: The prosecutor investigating the conduct of former President Donald Trump and his allies after the 2020 election has subpoenaed US Senator Lindsey Graham, former New York mayor Rudy Giuliani, and other members of Trump’s campaign legal team.

Fulton County District Attorney Fani Willis on Tuesday (US time) filed petitions seeking their testimony with the judge overseeing the special grand jury as part of her investigation into what she alleged was “a multi-state, co-ordinated plan by the Trump Campaign to influence the results of the November 2020 election in Georgia and elsewhere”. 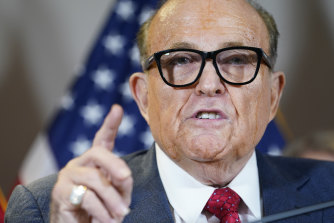 Former New York mayor Rudy Giuliani, a lawyer for President Donald Trump has been called on to testify.Credit:AP

Willis also filed petitions for five other potential witnesses, including lawyers Kenneth Chesebro, Cleta Mitchell, Jenna Ellis and John Eastman. Fulton County Superior Court Judge Robert McBurney signed off on the requests, which are similar to subpoenas, deeming them necessary to the investigation.

The special grand jury has been investigating whether Trump and others illegally tried to meddle in the 2020 presidential election in Georgia as he desperately tried to cling to power after Democrat Joe Biden’s victory. Trump continues to insist that the election was stolen, even as he eyes another presidential run, despite the fact that numerous federal and local officials, a long list of courts, top former campaign staff and even Trump’s own attorney general have all said there is no evidence of the fraud he alleges.

Willis, who took this unusual step of requesting a special grand jury earlier this year, has confirmed that she and her team are looking into a January 2021 phone call in which Trump pushed Georgia Secretary of State Brad Raffensperger to “find” the votes needed for him to win the state. She also has said the team is looking at a November 2020 phone call between Graham and Raffensperger, the abrupt resignation of the US attorney in Atlanta on January 4, 2021, and comments made during December 2020 Georgia legislative committee hearings on the election.

In the petition submitted to the judge, Willis wrote that Graham actually made at least two telephone calls to Raffensperger and members of his staff in the weeks after the November 2020 election. During those calls, Graham asked about reexamining certain absentee ballots “in order to explore the possibility of a more favourable outcome for former President Donald Trump,” she wrote. 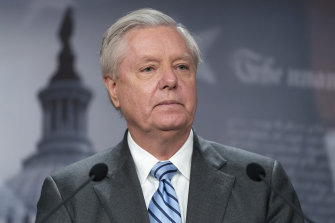 The Georgia prosecutor investigating the conduct of former President Donald Trump and his allies after the 2020 election is also trying to compel Senator Lindsey Graham to testify before a special grand jury.Credit:AP

A Graham spokesman did not immediately respond to a request for comment.

In the petition for Giuliani’s testimony, Willis identifies him as both a personal attorney for Trump and “a lead attorney for the Trump Campaign’s legal efforts seeking to influence the results of the November 2020 election in Georgia and elsewhere”.

As part of those efforts, she wrote, he and others appeared at a state Senate subcommittee hearing at the Georgia Capitol on December 3, 2020, and “provided testimony, additional witnesses, and documentary evidence purporting to demonstrate the existence of election fraud in multiple Georgia counties” during the November 2020 election. None of that has been substantiated.

Among the “evidence” Giuliani offered was a video recording of election workers at State Farm Arena in Atlanta, which he alleged showed them producing “suitcases” of unlawful ballots from unknown sources, outside the view of election poll watchers, Willis wrote.

Within 24 hours of the hearing, Raffensperger’s office had debunked the video and said that it had found that no voter fraud had taken place at the arena, Willis wrote. Nevertheless, Giuliani continued to make statements to the public and in subsequent legislative hearings claiming widespread voter fraud using that debunked video, she wrote.

“There is evidence that (Giuliani’s) appearance and testimony at the hearing was part of a multi-state, co-ordinated plan by the Trump Campaign to influence the results of the November 2020 election in Georgia and elsewhere,” the petition says.

Giuliani’s attorney, Bob Costello, said he had no comment and that his client had not been served with any subpoena.

A special grand jury, or special purpose grand jury, is impanelled specifically to investigate any alleged violation of the laws of the state of Georgia.

It’s not clear exactly what charges Willis could ultimately choose to pursue against Trump or anyone else. In a letter she sent to top-ranking state officials last year, she said she was looking into “potential violations of Georgia law prohibiting the solicitation of election fraud, the making of false statements to state and local government bodies, conspiracy, racketeering, violation of oath of office and any involvement in violence or threats related to the election’s administration.”