One of Victoria’s most prominent business figures has apologised to staff after making two comments that were perceived to be racially offensive by a subordinate.

Danni Hunter, executive director of the Property Council of Australia’s Victorian division, made the remarks at the council’s gala dinner at Crown’s Palladium on June 23. 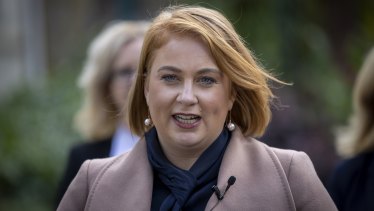 The staff member who made a formal complaint has since left the company. The senior employee, whose identity The Age has withheld for privacy reasons, quit partly in response to Hunter’s behaviour, two sources familiar with the episode confirmed.

Days after the dinner, Hunter apologised at a staff meeting. The Property Council of Australia is one of Australia’s pre-eminent bodies representing property developers and builders.

A spokeswoman for the council said the complaint was taken “very seriously”.

“The matter has been investigated confidentially in accordance with the Property Council’s people and culture policies,” she said.

“That process has resulted in a number of appropriate consequences and actions, including the senior staff member taking responsibility and issuing a full apology.”

The circumstances have been verified by The Age after conversations with five people who either witnessed the comments or were told about what occurred at the gala dinner. They all spoke anonymously because of the matter’s sensitivity.

Hunter’s comments seemed to be made in jest but were not received as being inoffensive.

The business leader has been on leave for more than a week. The Age contacted Hunter for comment but was referred back to the Property Council.

Last week, senior managers from the national branch in Sydney flew to Melbourne to speak to staff about the matter.

There has been a considerable staff turnover at the Victorian branch recently, including the departure of two of Hunter’s deputy executive directors to rival organisations. The turnover is unrelated to Hunter’s comments.

Hunter, who worked for Opposition Leader Matthew Guy when he was planning minister in the Baillieu-Napthine government, has been touted as a future Liberal Party MP.

The corporate figure rose to one of the most high-profile peak body leadership positions at a relatively young age.

Her relationship with the Andrews government deteriorated during the pandemic when she was a forceful critic of some government lockdown policies that contributed to financial losses for the council’s member companies deprived of rental income as people worked from home.

The relationship reached its nadir during a debate over a Victorian government proposal to tax developers to pay for public housing in exchange for speedier planning approvals.

Premier Daniel Andrews castigated Hunter and accused her of reneging on an agreement to publicly support the tax. Hunter denies any such agreement existed.