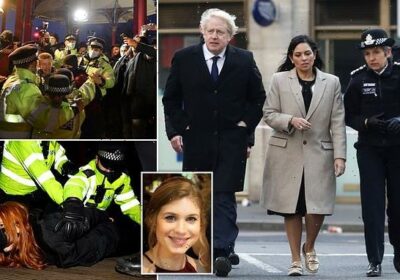 Priti Patel believes the Met Police is ‘rotten from top to bottom’ after ‘clashing’ with commissioner Cressida Dick over the Sarah Everard case, it has today been claimed.

The Home Secretary is said to believe that Dame Cressida, Britain’s most senior police officer, was ‘very defensive’ and ‘tin-eared’ over the 33-year-old marketing executive’s murder by Met officer Wayne Couzens.

Ms Patel is also reported to have become frustrated that the commissioner allegedly ignored inquiries that she tried to make on behalf of Ms Everard’s parents in March.

And she is said to believe the force to be ‘absolutely the worst’ in terms of a culture of ‘defensiveness’.

A Home Office source reportedly told the Sunday Times: ‘We have lost count of the number of conversations she had with Cressida and Steve House [the deputy commissioner].

‘They are not interested. It is institutional. They are very defensive. Policing is very defensive, but the Met are absolutely the worst.’

Ms Patel is reported to have clashed with Dame Cressida at the time of Ms Everard’s disappearance in March – when the Met also faced strong criticism for their handling of a vigil in the marketing executive’s memory. 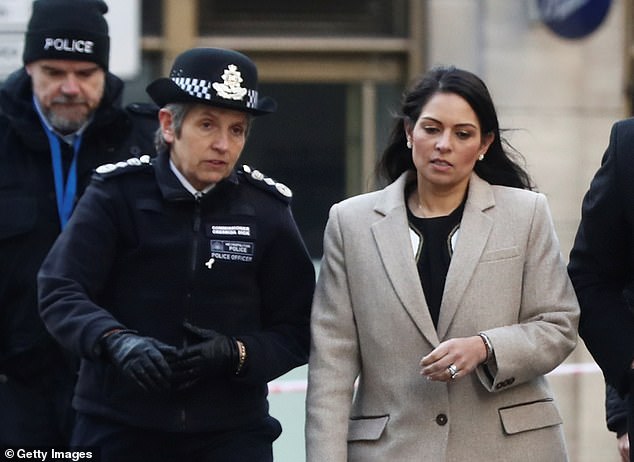 Priti Patel believes the Met Police is ‘rotten from top to bottom’ after ‘clashing’ with commissioner Cressida Dick over the Sarah Everard case, it has today been claimed. Pictured: The Commissioner and the Home Secretary in November last year 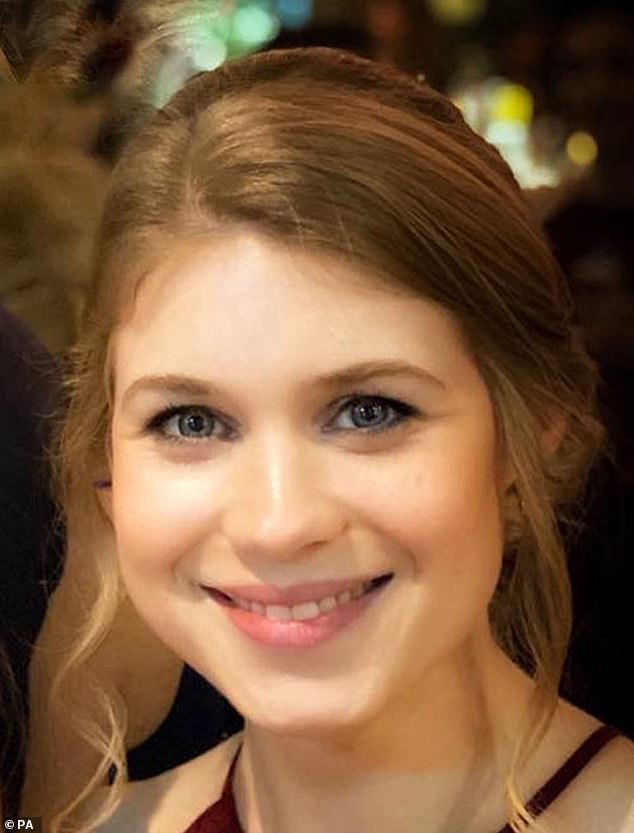 The Home Secretary is said to believe that Dame Cressida, Britain’s most senior police officer, was ‘very defensive’ and ‘tin-eared’ over the 33-year-old marketing executive’s (pictured) murder, by Met officer Wayne Couzens 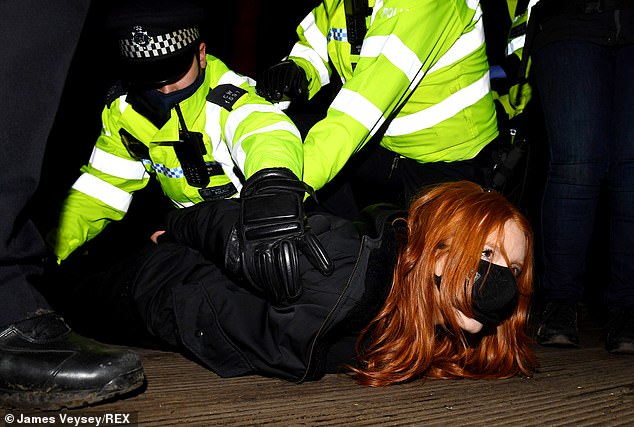 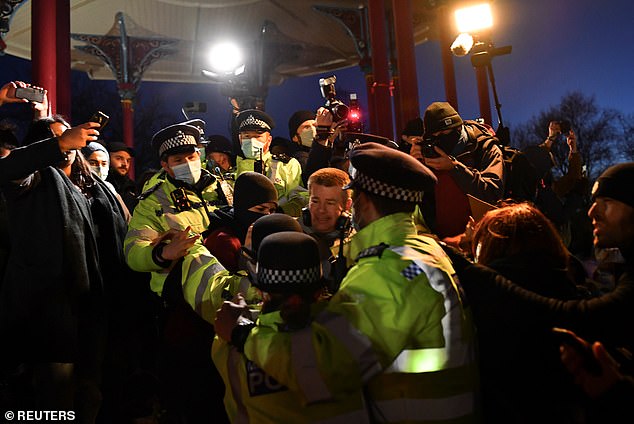 Boris Johnson is believed to have ‘infuriated’ Priti Patel by overruling attempts to make public sexual harassment a crime, it has today been reported.

Senior Home Office sources suggest there is tension between the pair over how to better tackle violence against women in the wake of the murder of Sarah Everard.

It has led some in the Home Office to fear that the prime minister views the issue of public sexual harassment against women as mere ‘wolf whistling’, according to the Guardian.

It comes after the Prime Minister brushed off calls to formally recognise misogyny as a hate crime.

He instead arguing the ‘abundance’ of existing laws should be better enforced rather than new legislation brought in.

But the move is reported to have caused ‘disquiet’ in the Home Office.

Meanwhile, on the issue of public sexual harassment towards women, an anonymous Home Office source reportedly told the Guardian: ‘Trying to bring it down to wolf whistling is massively problematic. But we’re going to make this happen.

‘People are prepared to put their political capital behind this, and the home secretary is among those very much behind it.’

Another reportedly added: ‘Make no mistake, Boris Johnson is the person blocking and holding this back. He seems to be stuck in the past on this issue.’

It comes after Ms Patel launched a consultation on tackling violence against women and girls.

The petition is said to have drawn 180,000 contributors – most of which are though to have been sent after Ms Everard’s murder in March.

Many respondents said they suffered harassment on a daily basis, while a YouGov poll earlier this year revealed that more than half of women said they had suffered sexual harassment on public transport in London.

Earlier this week the Prime Minister vowed to make domestic violence and rape the ‘number one issue’ he tackles within policing.

He said the way police and criminal justice system currently handles violent crimes against women was ‘just not working’.

But asked if he believed misogyny should be a hate crime, Mr Johnson told BBC Breakfast: ‘I think that what we should do is prosecute people for the crimes we have on the statute book.

‘That is what I am focused on. To be perfectly honest, if you widen the scope of what you ask the police to do, you will just increase the problem.

‘What you need to do is get the police to focus on the very real crimes, the very real feeling of injustice and betrayal that many people feel.’

Despite Mr Johnson’s comments, Home Office officials are understood to be conducting a legal review into making public sexual harassment a crime in its own right, according to the Guardian.

It is believed such a law would cover all behaviour that could make women uncomfortable in all public spaces.

Ms Everard went missing while walking from a friend’s home near Clapham Common, south London, on March 3. Her body was found in woodland near Ashford, Kent, on March 9.

Couzens later admitted to using his Met Police credentials to kidnap Ms Everard on the grounds of Covid rules. He was sentenced to a whole life order earlier this month.

Before Ms Everard’s body was found, Ms Patel is reported to have spoken to Ms Everard’s parents, Susan and Jeremy, via Zoom and later invited them to the Home Office.

Sources have reportedly told the Sunday Times that, at the time of Ms Everard’s disappearance, Ms Patel made herself a ‘pain in the a**s’ in talks with Dame Cressida and told her to ‘cut the c**p’.

Her experience of dealing with Ms Everard’s parents and the Met Commissioner has apparently driven her motivation to make changes.

It comes as it was revealed that Ms Patel is set to unveil a major ‘hire and fire’ shake-up of how police chiefs are chosen in the wake of the tragedy.

The Home Secretary plans a ‘blueprint for succession’ for Metropolitan Police Commissioner Cressida Dick and chief constables across England.

She will take action to end what allies condemn as the ‘Buggins’ turn’ system of how chief constables are taken on – one in which appointments seem to be made in rotation rather than by merit.

The shake-up emerged amid reports that Ms Patel only agreed to extend Dame Cressida’s term of office last month because there was no one suitable to replace her.

But her plans also follow claims of friction between the Home Secretary and the Met Commissioner, who has faced calls to quit in the wake of the brutal killing of Ms Everard by serving Met police officer Wayne Couzens in March.

The Mail on Sunday understands that between Ms Everard’s disappearance and Couzens’s arrest, the Home Secretary privately asked Dame Cressida and her team if a police officer could be involved but was not told whether her suspicions were correct.

A source close to Ms Patel said the prospect of a policeman being responsible felt likely because Covid restrictions meant there were very few other people on the streets. The source said: ‘We asked the question.’

The Home Office is also understood to be annoyed that last week the Met chief announced a review in the force’s professional standards and internal culture 24 hours before Ms Patel announced a Government inquiry.

Ms Patel is said to be determined to watch Dame Cressida ‘very closely’ over the vetting of officers in light of Ms Everard’s murder.

Under reforms introduced by Theresa May in 2012, elected Police and Crime Commissioners hold the power to hire and fire chief constables in forces outside London.

Ms Patel retains the power to appoint Metropolitan Police chiefs but must consult London’s Labour mayor Sadiq Khan. Privately, Ministers admit he has an ‘effective veto’ as the Home Secretary could not in practice appoint a Met chief the mayor refused to work with.

A well-placed source declined to give details of Ms Patel’s proposals, but indicated that she wanted Home Secretaries to have a role along with PCCs in how chief constables were picked and dismissed.

The source denied the plans would involve reducing the powers of PCCs, but stressed the need for ‘greater accountability’ in how police chiefs were picked.

He would not say how the reforms, to be unveiled within months, would affect hiring a successor to Dame Cressida, who stays in post till 2024. ‘That’s to be decided,’ he said.

Ms Patel has said publicly she would ‘continue to work with’ Dame Cressida and continue to hold her and the Met to account. 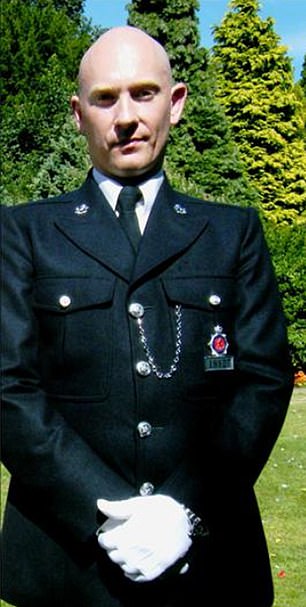 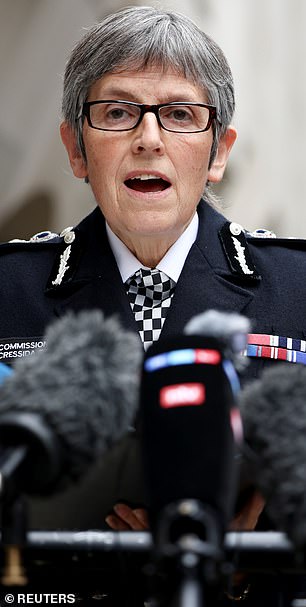 Couzens (left) used his Metropolitan Police warrant card and handcuffs to abduct the 33-year-old marketing executive as she walked home from a friend’s house in Clapham. He was sentenced to a whole life order earlier this month after admitting raping and killing Ms Everard. Commissioner Cressida Dick (right) has faced calls to resign amid the fallout from the case, while Ms Patel has come under pressure to tackle violence against women

Dame Cressida has acknowledged that a ‘precious bond of trust’ had been damaged by Couzens, who had ‘brought shame on the Met’.

But she has faced calls to resign, with Labour MP Harriet Harman saying the case has ‘shattered’ women’s confidence in the police.

Mr Khan’s spokesman said: ‘The murder of Sarah Everard by a serving police officer has severely damaged trust in the police.’

He said the Met had a ‘huge job to do to regain the trust of women, girls and all Londoners’ and the mayor will be holding them to account to deliver the necessary change.

A Met spokesman said last night that the force did not provide a ‘running commentary’ on the Commissioner’s calls with Ms Patel, adding that Couzens’s identity came as a ‘bolt from the blue’.

MailOnline also contacted Scotland Yard for a comment in regards to the claims made in the Sunday Times, but had not received a response in time for publication.