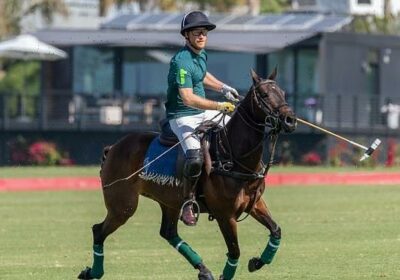 A blast from the past: Prince Harry is pictured playing polo in California as he carries on playing the sport he enjoyed in Britain

He might have turned his back on Britain, but Prince Harry is still committed to one of its most traditional sports.

The Duke of Sussex was in his element as he played a friendly game of polo with his old friend Nacho Figueras on Saturday.

Harry, 37, grew up playing the game with his older brother Prince William, 39.

And he showed that he still has a keen interest since moving to the US, playing with professional polo player and face of Ralph Lauren Figueras at the Santa Barbara Polo and Racquet Club for the annual Harry East Memorial Tournament.

The club is not far from Montecito, where Harry and his wife Meghan live with their two children, Archie, who turns three on Friday, and Lilibet, who is ten months old.

Taking to Instagram, Figueras posted a snap of the reunion and said: ‘Thrilled to be riding alongside my friend, Prince Harry… We’ve ridden together many times over the years and now we’re both parents, it’s extra special to be able to spend this time together.’

Figueras was among the guests at Harry and Meghan’s wedding in May 2018.

He is an ambassador for Sentebale, an organisation founded by the prince which is dedicated to helping children and young people who or whose families suffer with HIV and Aids in Lesotho, South Africa.

Harry recently attended the Invictus Games at The Hague in the Netherlands with Meghan.

During their trip they made a secret stop-off in the UK, where they visited the Queen at Windsor Castle.

It is not yet known whether he will return to the UK for her jubilee celebrations next month.