Pope Francis brings hope to the poor in Assisi visit 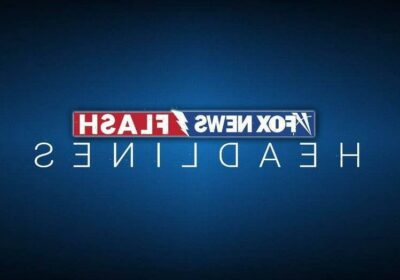 Pope Francis traveled to the hilltop town of his namesake for the fifth time in his pontificate on Friday to honor the poorest and most marginal and urge that they be welcomed and cared for by the church.

In one of his first outings in Italy since the coronavirus pandemic, Francis took his time greeting schoolchildren and some of the 500 people brought by Catholic charity groups to Assisi to join Francis in marking the Catholic Church’s world day of the poor.

THE VATICAN LIBRARY OPENS TO THE PUBLIC 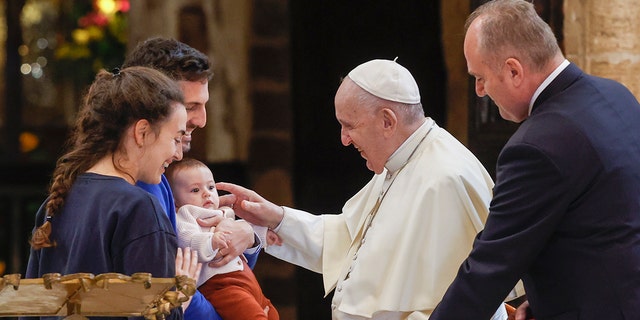 Pope Francis caresses a child as he arrives to preside a meeting of listening and prayer in the Basilica of Santa Maria degli Angeli in Assisi, central Italy on Friday.
(AP Photo/Riccardo De Luca)

A refugee gave Francis a pilgrim’s walking stick and cloak outside the Basilica of St. Mary of the Angels, which hosts the famed Porziuncola chapel, birthplace of the Franciscan order of the pope’s namesake, St. Francis of Assisi.

Francis greeted disabled children in the basilica and prayed in the chapel before hearing testimony from a handful of people who offered heartwrenching testimony about their lives on the margins.

One former Spanish drug dealer recounted how he turned his life around after a priest smiled on him and offered him shelter. A Romanian woman wept as she told Francis that she suffers such chronic pain that she cannot work. Two Afghans recounted how they recently fled to Italy after the Taliban takeover of their country, only to feel their souls are still there.

Those offering their testimony choked up and wept openly as they spoke to the pope, who thanked them for their courage in telling their stories and “opening their hearts to give us their richness and heal our wounded hearts.”

“The presence of the poor is often seen as an annoyance and is put up with,” Francis said from the altar. “Sometimes we hear it said that those responsible for poverty are the poor! So as not to carry out a serious examination of conscience on one’s own actions, on the injustice of certain laws and economic measures, on the hypocrisy of those who want to enrich themselves excessively, blame is laid at the feet of those who are weakest.” 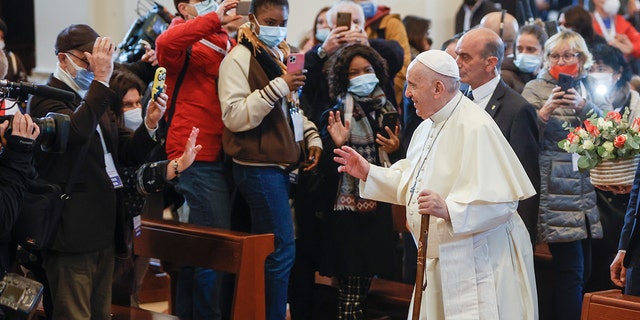 Pope Francis uses the pilgrim’s walking stick he symbolically received upon his arrival to preside a meeting of listening and prayer in the Basilica of Santa Maria degli Angeli in Assisi, central Italy on Friday.
(AP Photo/Riccardo De Luca)

He said the faithful could learn from the example of Francis and those who offer shelter to the poor and marginalized. “Hospitality means opening the door, the door of our house and the door of our heart, and to allow the person who knocks to come in,” Francis said. “And that they might feel welcome, not ashamed.”

During an off-the-cuff remark, Francis also gave a shout-out to the retired archbishop of Lyon, France, Cardinal Philippe Barbarin, who attended the service. Barbarin stepped down after a French court convicted him of covering up for a pedophile priest, only to have his sentence overturned on appeal.

Francis said Barbarin knew well what it was like to “suffer with dignity the experience of poverty — of abandonment, distrust.”

“He defended himself with silence and prayer,” Francis said, as a clearly moved Barbarin listened from the pews. “Thank you Cardinal Barbarin for your witness that edifies the church.”

The poor were being hosted for a luncheon offered by the archbishop of Assisi, while the pope was due to return home to the Vatican by midday. 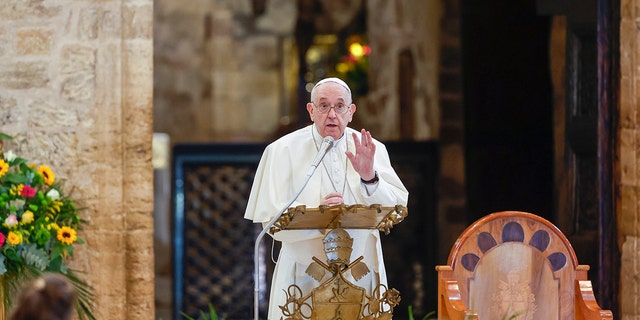 The Argentine Jesuit is the first-ever pope to have named himself after the 13th century friar, who renounced a wealthy, dissolute lifestyle to embrace a life of poverty and simplicity. The pope said in the first days of his pontificate that he chose to name himself after St. Francis because he wanted a “poor church, and for the poor.”

Francis was last in Assisi in October 2020, when he signed his latest encyclical “Brothers All” on the tomb of St Francis on the anniversary of the saint’s death.